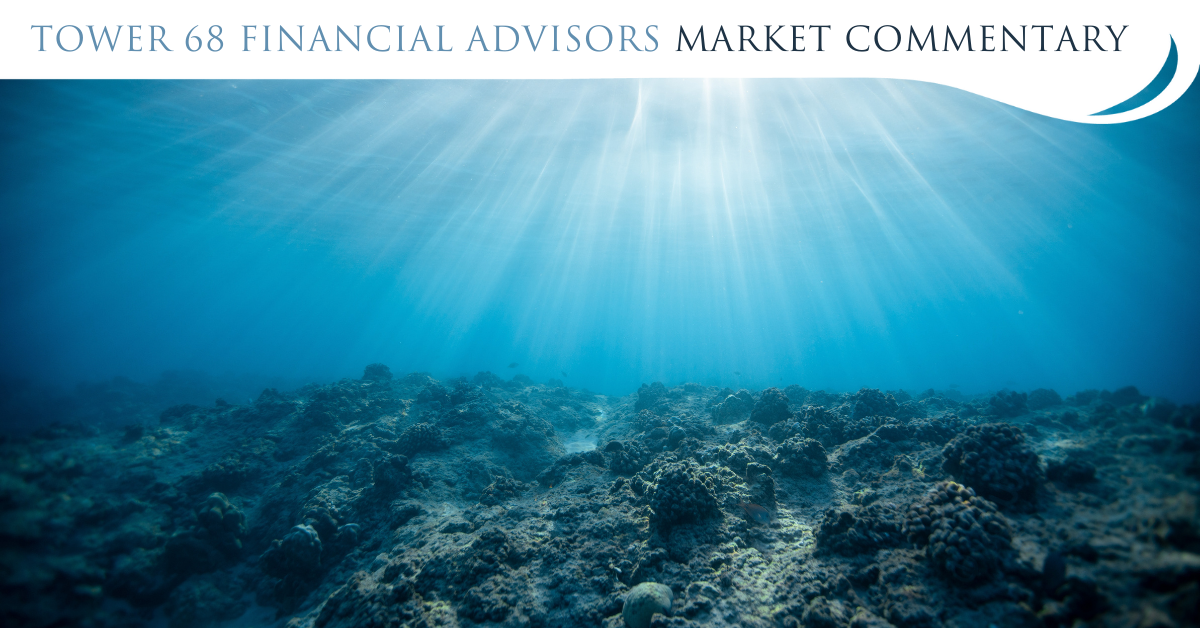 This week I really don't have a whole lot to share with you. I really don’t need to restate that we have a market that has a number of different issues raining on its parade. So, I am going to put some things into perspective as this is really what we should be doing now more than ever, but daily as well.

To illustrate, this is why tops usually form when most are bullish and feeling great about the future while bottoms form when everyone is pessimistic and expecting the worst. If you're waiting for all the risks to go away before deciding to commit more capital to market-sensitive investments, you will either never invest or consistently get in near a top only after it feels "safe." When a market feels safe, it usually isn’t. When it feels like there's no possible way it can rise, that is usually when you want to buy. Technically stocks are very very oversold, while sentiment is extremely negative. These tend to be precursors to major market bottoms. Please take a moment to see some perspective on where we are right now in the following chart. You will notice that this has been the worst start of the year since 1939. 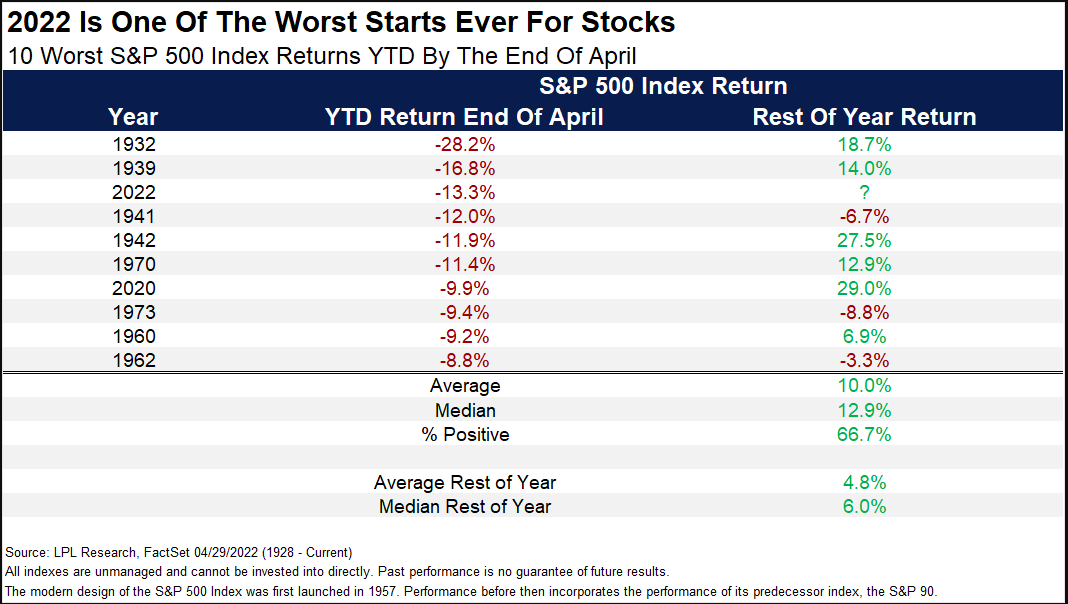 We also noticed a couple of more issues that started this week with things you often see on a bottom checklist. The three that seem to be the easiest to earmark are as follows:

Bottom line, "for now" I continue to believe that we remain in a trading range as we are still sitting in the summer doldrum period of a difficult midterm election year with the Fed not making the monetary environment particularly enticing. We have endured a little more than 14 years of sequential crises, which include the Great Financial Crisis of 2007-09, the COVID pandemic of 2020, and the current geopolitical crisis brought on by Russia's incursion into Ukraine. These have all strained the fabric of the global economy with risks that have demanded dramatic inflows of liquidity into the economic landscape to support global economies and their markets. Central Banks offset risks that could have caused deep recessions or even skirted a depression. In retrospect, it appears clear that the addition of fiscal stimulus along with central bank monetary policy stimulus in the pandemic crisis is what in our view led to an overstimulated economy stateside and elsewhere which in turn has led to problematic price levels (inflation). These were not experienced during the Financial Crisis yet are now being seen clearly. I find the chart below to be a very good representation of what happens when US equities get sold off to an extent that cash (which earns nothing) is in short bursts of time a better investment than long-term companies. You will see below that this happened in 2008, 2011, 2015, and 2018 (when the Fed hiked rates 9 consecutive times), 2020 COVID-low, and right now!

Easy money or "easier money" is what happened in the crises that predated the 2015 recession driven by the Great Financial Crisis which officially began in 2007 (even though the major banking stocks began their descent in 2006). Eventually, this infusion of monetary stimulus and capital infusion shook the foundation of the financial system of the world once it had run its course. Since 2007 the effects of unprecedented levels of emergency funding of the stateside economy by the Fed and by other central banks that piled on in a “monkey see monkey do” fashion exacerbated the nearly free money for borrowers.

Now, let's take a deep breath. Was there ever a doubt in your mind that if you increase the entire money supply of the world by 40% in less than a two-year period that inflation would eventually raise its ugly head? Of course not! Don’t take this to mean that the US Fed entered this situation blindly. Instead, I believe it was a situation of what should be done that would have the least negative effect on the economy going forward.

The next major decision that I believe needs to be made is some level of soothing commentary from the Fed. They need to walk a fine line that they are not intending to raise rates now as they did in 2018 and end up reversing the economy completely. I am not suggesting that there needs to be some form of QE as they had done before, but some level of reassurance that they are not blindly motivated to stop inflation at the cost of damage to the entire economy. See the below picture of the infamous 2-year / 10-year yield curve spread. Remember, when the 2 is above the 10, the curve is considered “inverted.” This tends to be a precursor to a recession. As you can see, it briefly did this at the beginning of April, for one day, but has since remained in a normal spread, inferring that the money is currently expecting the Fed to orchestrate a gentle landing of the economy.

Fed Chair Powell stated last week in his meeting that he did not feel that the economy was anywhere close to a slowdown that could be considered recessionary, yet market rates seem to be doing all the slowdown action on their own. We are still recognizing by financial reports that spending is still very strong. The other issue that is very difficult to measure is the inventory stockpiling due to the supply chain crisis. The next chapter of supply chain issues as China stays in lockdown status and the Russia / Ukraine conflict continues in full swing is accentuating the price inflation issue. These are clearly issues that fall in the category of "this time is different." This issue, as I see it, is that the Fed can blunt demand by increasing interest rates, but if the supply doesn't come back then we have a double whammy of the increased cost of money causing a slowdown, but prices not falling due to a still large lack of inventory!

So here are the dominoes in the previous comment: Fed recognizes inflation due to huge amounts of cash, excessive demand, rising wages and full employment. Fed raises rates to slow the amount of consumption of inventory by businesses and the consumption by the public. At the same time, inventories are non-existent due to supply chain issues in China and a war in the breadbasket of Europe between Russia and Ukraine. This forces prices higher due to falling inventories. This is a conundrum for sure. The markets understand this conundrum, but what has them uncomfortable is that there is not a measurable or quantifiable end to this. It will happen over time, but not before we see an onslaught of headlines about “food rationing” and economic destruction due to energy costs. All will know that the media will accentuate with headlines, but still, an end is not here yet.

This leaves us at a point where we start to monitor the level of the decline we have experienced based on the above-mentioned issues. With Friday's (05/06/22) and Monday’s (05/09/22) decline, the broad equity markets have put in their longest losing streak in 10 years. It doesn't mean that we are necessarily moving into a full-blown bear market, yet on many measures, this has been a truly recognizable decline. The point that makes it feel so strange is that many measures of the economy show full employment, rising wages, and increasing price levels usually associated with strong economic demand.

How we come out of this is difficult to measure, but I have faith that Fed Chair Powell will not over-raise interest rates and instead let the markets do the difficult lifting on their own. The S&P 500 has yet to decline 20% from its all-time high, keeping this down-move well within the realm of "normal," yet the NASDAQ 100 and Russell 2000 (small-cap index) are both already down more than 25%. In the past couple of weeks, we have had to deal with five 80-90% downside days, by my count, including three of these being over 90% downside sessions. That is the kind of extreme selling that suggests capitulation, panic, and a possible market bottom. If you would like to dive a little deeper into this final point, please google, “Lowry White Paper: Identifying Bear Market Bottoms and New Bull Markets.” This was written by Lowry research corporation in 2008.