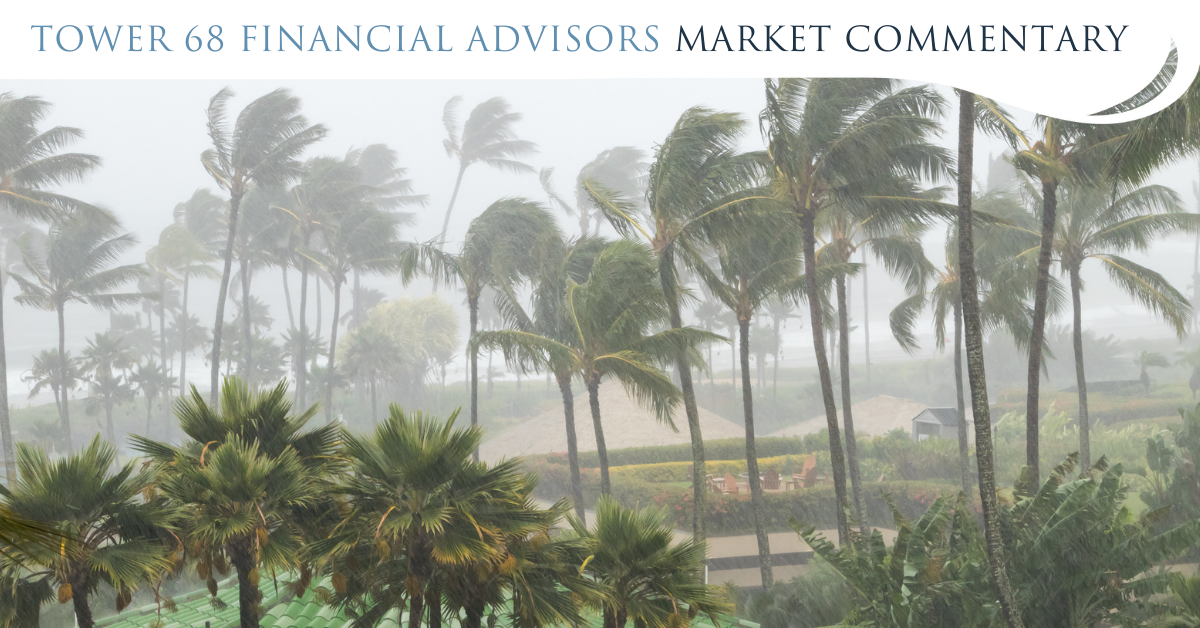 A Bad Start To A Year Isn't A Death Sentence

In today's newsletter, I am going to cover what I believe to be the important points to cover that should be focused on instead of focusing on the continued death and destruction being espoused by the media. As far as I see it, these are the points that need to be watched today:

To address number one above, I believe that it is really important not to focus on the fact that many of the cult favorite leading companies over the last couple of years have been absolutely trounced in this recent decline, but instead focus on more broad issues. When I am referring to more broad-based issues, I am looking at things like the number of new highs vs. new lows on the entire index. Take a second to ponder this. The markets swooned to low on February 24th, the day that Russia said it was invading Ukraine. When the markets were trying to resurrect itself, it was greeted with more selling that took it down a second time with March 8th. Then last Monday (03/14), in preparation for the eventual interest rate hike by Jerome Powell and the US Fed, the market dropped once again.

Now, if one is to look at the chart below, it is glaringly obvious that each time the New Highs vs. New Lows tried to register a greater number of lows at the low, they would see the exact opposite! Each number of new lows was a lesser number of new lows. I guess a better way to say it was that things have become "less bad." Now, this doesn't mean that we are off to the races, but it is a start that should force us to poke around to see if anything else is starting to exhibit the same type of behavior. Viola! The Small-Cap Index is doing the same thing and has risen above its 50-day moving average of price. Same with Mid-Caps, Emerging Markets, and Developed International markets as well. To help translate: not only are things becoming "less bad", but the “less bad” move is happening in a very broad number of locations. 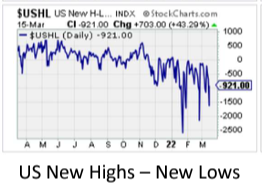 The same theory applies in the Buying Power vs. Selling Pressure on the NYSE just below the Hi/Low chart. 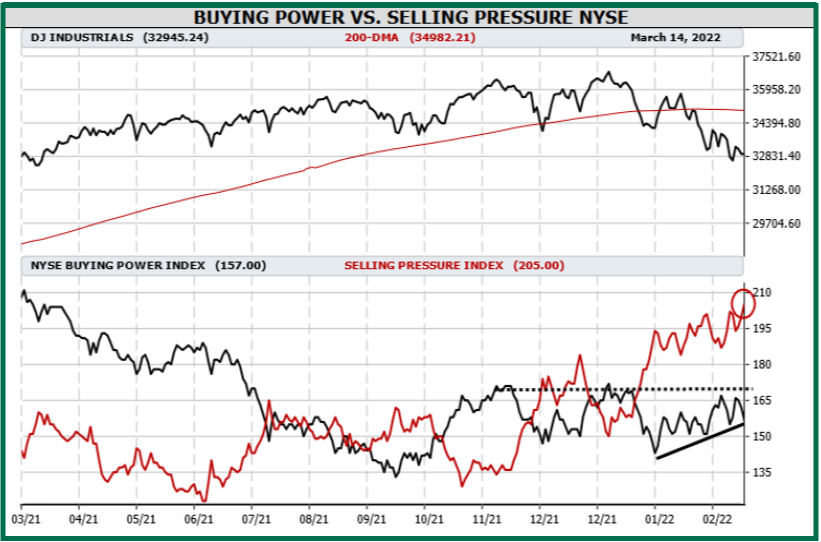 Now let's look at #2: What happens when the market starts a year as poorly as it has this year?

Here are some stats:

So where will we end the year? I would tell you, but my genie hasn't come out of the lamp yet! So, you might have a tough time believing these numbers as it is such a small sampling. So, let's add a few more examples: 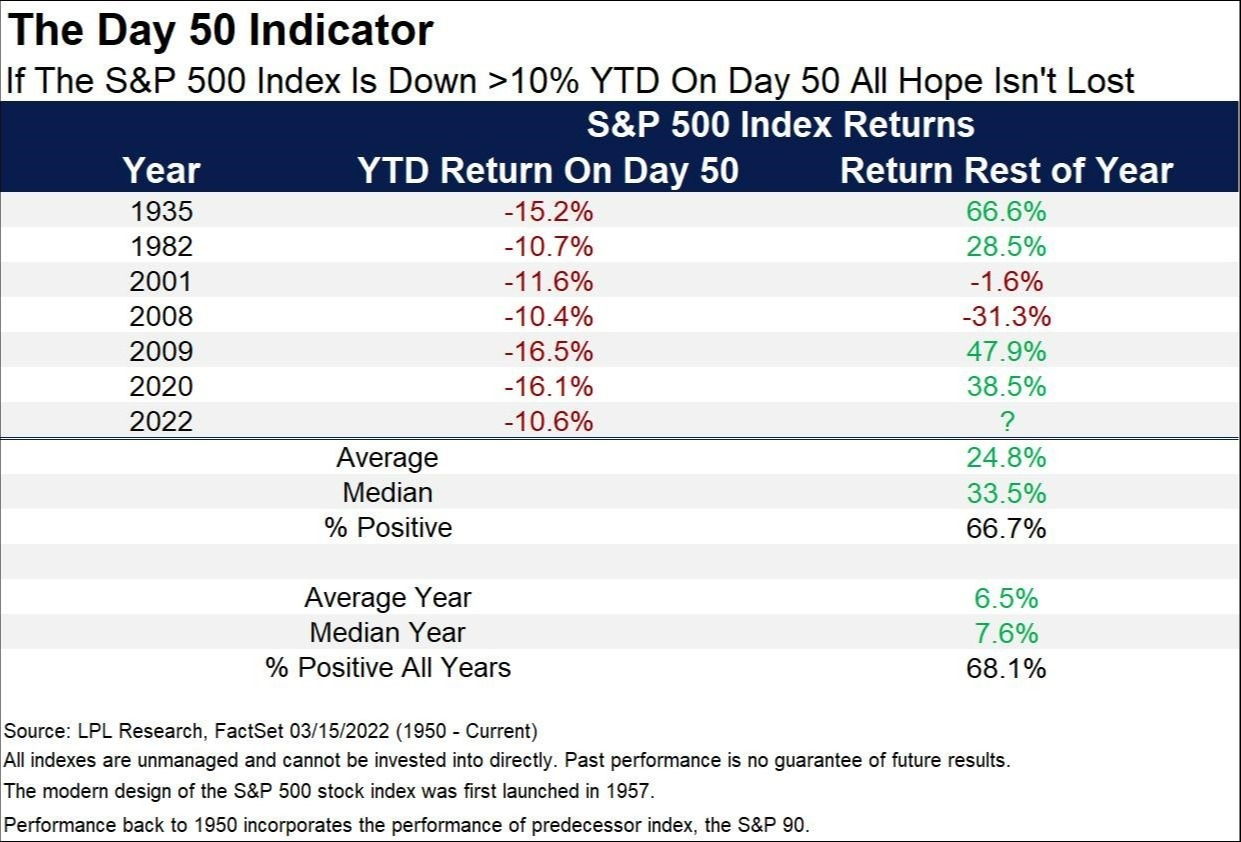 Leon Tuey had this to say, "What transpired on Monday was a classic case of capitulation, a selling climax. Capitulation always occurs after a long or sharp decline when investors can no longer stand the pain of losses and visions of total financial loss dance in their eyeballs and are willing to sell at any price. They 'throw out the babies with the bathwater.' It always marks the end of a correction/ bear market. In my 60 years as a market observer, I've heard the following over and over again, 'Policy error,' 'They are behind the curve,' 'This time is different,' 'They've lost control', 'They are running out of bullets', ad nauseum. These folks always think only they know 'the problem' and the Fed is totally ignorant. Noticed, however, they never provide any solutions. As mentioned in my previous reports, if they truly believe the Fed doesn't know what is going on or what to do, we'll all end up in a bread line with no bread. Ladies and gentlemen, the nearly year-long correction are over, and the secular bull market has resumed. An outstanding opportunity is being presented."

As for #3 above, what do we need to know about interest rate hikes?

After we start a rate hike cycle, what could happen next? Investors need to remember that Fed rate hikes usually happen near the middle of the economic cycle, with potentially years left of gains in stocks and the economy. In fact, a year after the first hike in a cycle has been fairly strong, higher a year later the last six times! 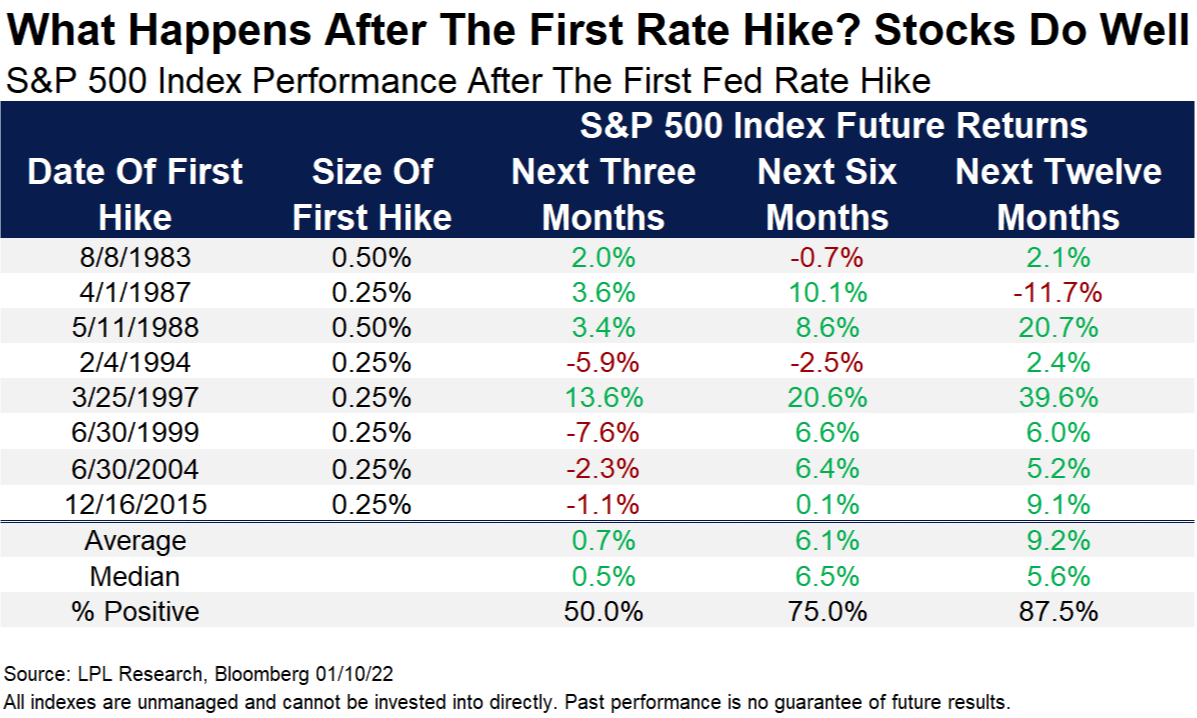 Although last month a 50-basis point hike was priced in by more than 90% chance, we only got a 25-basis point hike last week. During periods of extended rate hiking cycles (like the one we appear to be at the beginning of) stocks have done quite well. 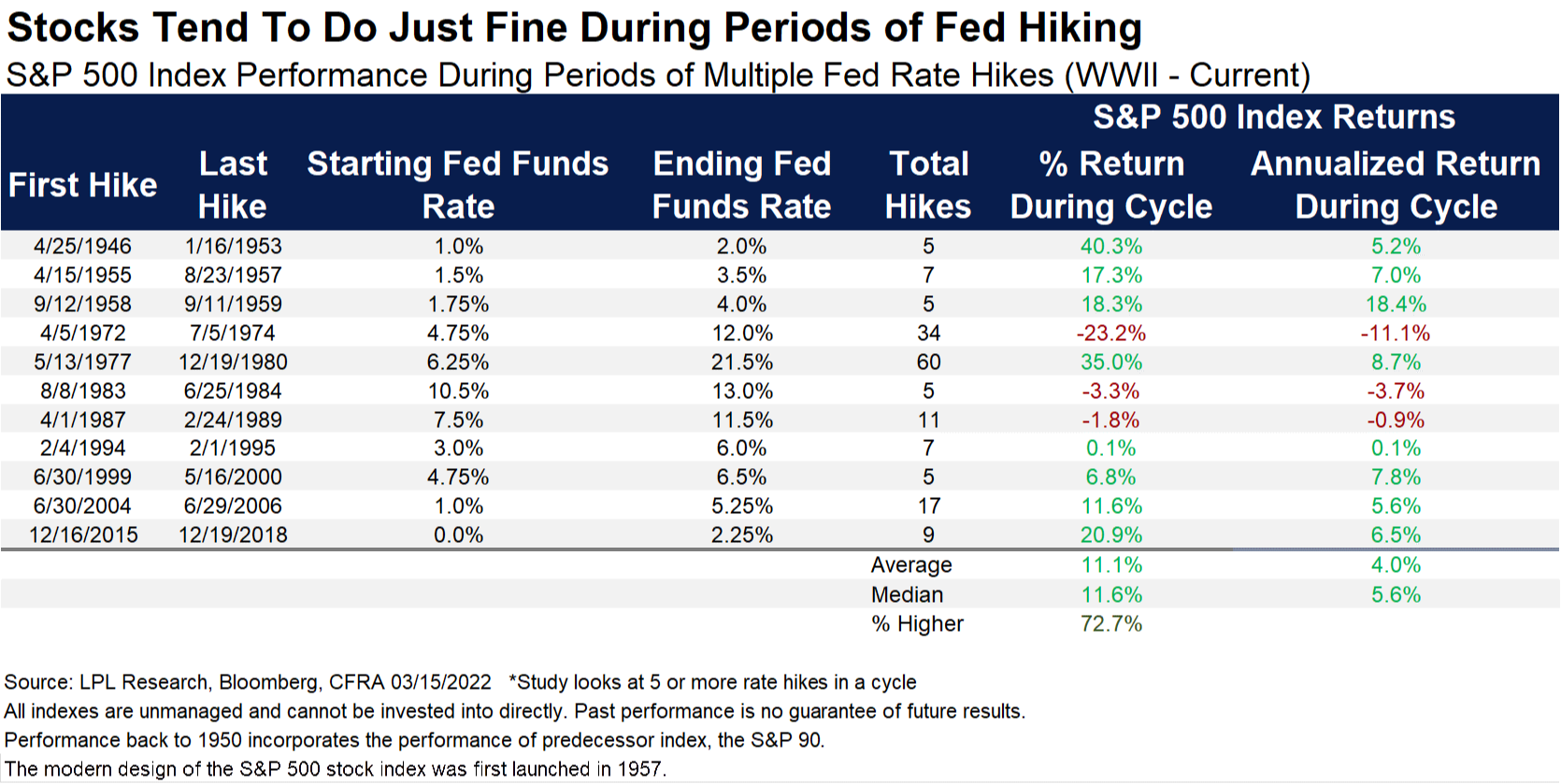 Four or five hikes this year sounds like a lot, but expectations are currently sitting around six or more. Remember that we've seen many years that saw many rate hikes, as shown in the chart above. The bottom line is rate hikes usually aren't Bearish events and we don't expect this cycle to be any different. Fed chief Powell has made it perfectly clear; he has laid out the economic facts he is basing his decision on, and the number one thing he does not want to do is tighten too fast and throw the economy into a slowdown/recession.

This brings us to our 4th and final point in today's letter, where should an investor be focusing if they are choosing to play offense rather than defense?

This clearly suggests that Leon Tuey's comments above could possibly be correct. Mixed economic reports for the last week showed consumer sentiment and spending moving lower and spending moving higher. Last week the indexes were pretty much all up from 4.2% to 8.18%% for the NASDAQ even in the face of the "feared" rate hike and continued destruction in Ukraine. It's also worth noting that all the indexes were high from the February 24th lows as well. Given all this info, and the rest of the information in this letter as a backdrop, where am I focusing:

These may seem like tall orders, but this is why our team here at Tower 68 spends endless hours researching day in and day out. If you would like to discuss what we are finding and where the opportunities exist, please feel free to call us, we will be happy to share what our portfolios are concentrated in and what is currently developing.

As a final note, there was a very good interview in Barron’s over this past weekend, A Financial Storm Is Brewing In Europe. Where To Hide. I highly recommend that you read this to get an understanding of the economic effects the Russian / Ukraine conflict is having on China and the rest of Europe.