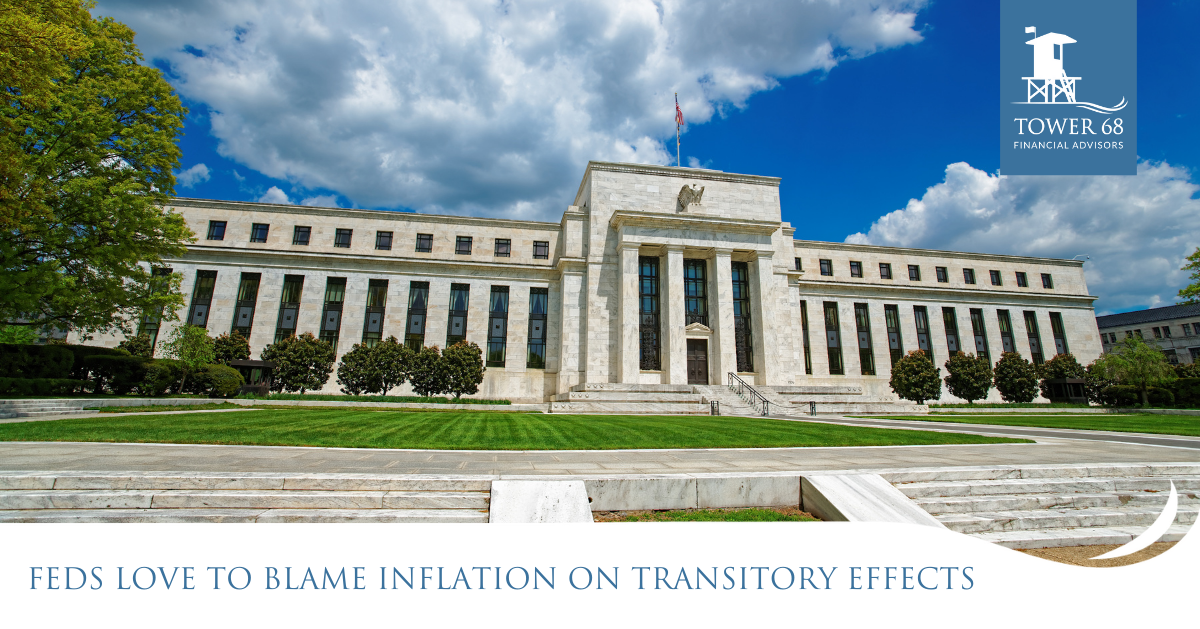 But retirees need to remember that inflation is a symptom, not a cause

Does increasing inflation boost economic growth? And do dropping prices hurt growth prospects? No and no. But to hear the Federal Reserve tell it when Janet Yellen was Chair (from 2014 – 2018), that was the way the world worked.

And while things are very different now, the words are eerily similar – especially since then Fed Chair Yellen, who is now Treasury Secretary – and current Fed Chair Jerome Powell are both fond of the term “transitory.”

Fed-bashers will suggest that the Fed doesn’t have a good track record on this front, and its credibility is suspect. They would remind you that our central bank spent six years expanding its bond portfolio to $4 trillion from 2009 through 2015, in an effort to boost the inflation rate to 2%. And that did not go so well.

So why does letting inflation run more than 2.5x that 2% goal make sense now? And should we worry about the Fed’s $8.1 trillion balance sheet as of September 2021? And how long is transitory anyway?

It doesn’t, yes and no one knows.

Travel Back Just Six Years Ago

Back in 2015, the U.S. Bureau of Labor Statistics (BLS) reported that the Consumer Price Index (CPI) for All Urban Consumers declined in January and it did so for the next four months.

In other words, the U.S. had joined Europe in deflation mode. It was the first time the CPI hit negative territory for the year since October 2009, right after the official end of the recession. Imagine how low prices would have been if the Fed didn’t buy all those bonds, known as quantitative easing.

That dropping oil prices caused U.S. deflation underscores the foolishness of the Fed fantasy about a 2% inflation rate.

As David Stockman, former Director of the Office of Management and Budget under President Ronald Reagan put it, “the CPI measure of inflation is so distorted by imputations, geometric means, hedonic adjustments and numerous other artifices, that targeting to 2% versus 1% or even a zero rate of short-term measured consumer price inflation is a completely arbitrary, unreliable and unachievable undertaking. Yet [then Fed Chair Janet] Yellen’s latest exercise in monetary pettifoggery is apparently driven by just that purpose.”

You might have stopped short of calling Yellen a pettifogger (that’s a person who raises annoying objections), but when she said weak inflation was the result of the “transitory effects of lower energy prices,” as she did in her testimony before Congress, she might have been asking for some serious name calling.

The implication of “transitory effects” is that that period’s deflation was just a blip that would disappear like the spring snow in your backyard, and when it does, the sun will shine and the Fed’s efforts to boost inflation will flower.

But Inflation is Just a Straw Man

Consider the stagflation of the 1970s, when prices were rising and the economy remained in miserable shape. There are also plenty of examples of hyperinflation in some of the world’s most dysfunctional economies.

The reasons behind price changes are more important than whether prices are rising or falling. Deflation in Japan and Europe was a problem, given their long-time economic weaknesses. But in the U.S., deflation may have helped the economy more than the Fed’s multi-trillion-dollar bond buying program.

As bond buying tapered off, the dollar strengthened. Meanwhile, other countries were weakening their currencies with their own versions of quantitative easing. As a result, goods imported into the U.S. – including oil – cost less, while U.S. companies were holding their own prices down to remain competitive.

American consumers benefited from the windfall, as they had more discretionary income, which they were spending.

Meanwhile, deflation gave the Fed yet another reason to keep ZIRP-ing along, meaning zero interest rate policy. At the same time, the Fed could claim that the American economy was booming, even though it was a pretty weak boom.

The other key BLS statistic reported back then was the revised gross domestic product number for the fourth quarter of 2014. While the BLS initially estimated growth at 2.6% (historically modest, but a boom for the post-financial crisis Obama years), it was reduced to 2.2%.

Growth of 2.2% is not much better than the 2% growth the economy had experienced throughout the post-crisis recovery, and it was much lower than the 3.3% average growth the U.S. enjoyed in the period from World War II until the financial crisis.

Of course, the U.S. economy looked like it was booming when compared with the global economy. As former Fed Chair Alan Greenspan told CNBC, “global effective demand is extraordinarily weak – tantamount to the late stages of the Great Depression.”

Back to the Present Time

Back to the original two questions:

The answers are still no and no.

What You Should Do

It’s actually quite simple: one should consider addressing the inflation issue early – when still a pre-retiree. Planning ahead and understanding the risks is paramount.

This issue is a big concern for today’s retirees. They will likely experience a longer retirement than any other generation ever. They need to guard against the potential damage done by regularly increasing costs over the decades.

On behalf of your future self, plan ahead to establish lifestyle-sustaining income. Your financial professional can help.

Inflation is the rate at which the general level of prices for goods and services is rising, and, subsequently, purchasing power is falling.

Gross Domestic Product (GDP) is the monetary value of all the finished goods and services produced within a country’s borders in a specific time period, though GDP is usually calculated on an annual basis. It includes all of private and public consumption, government outlays, investments and exports less imports that occur within a defined territory.

This article was prepared by FMeX.