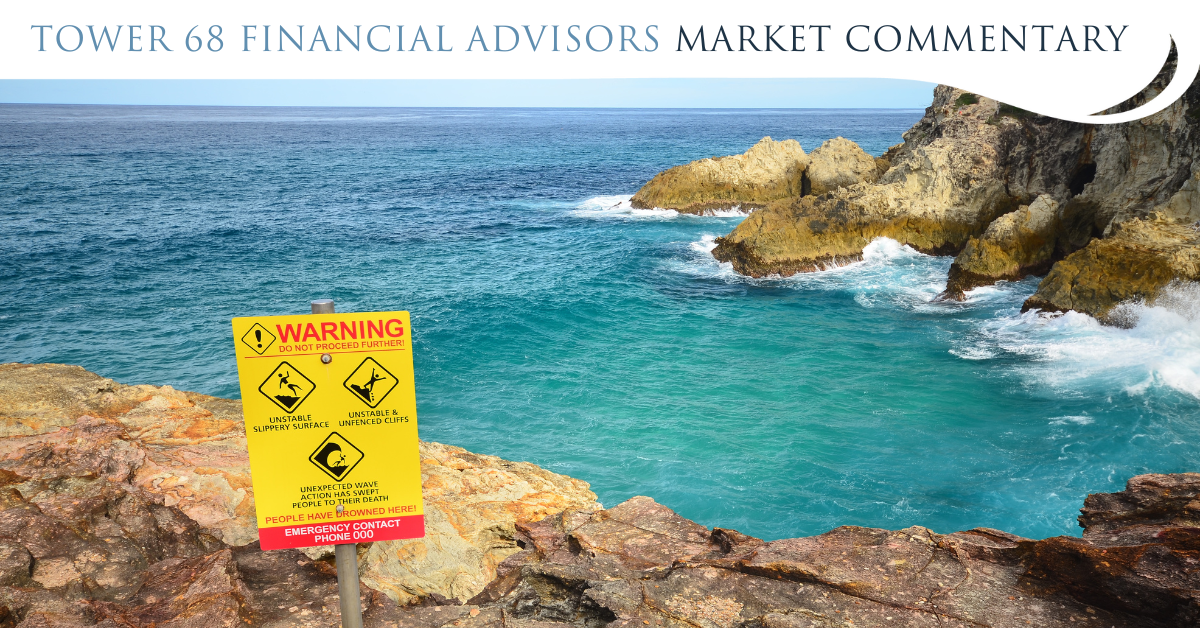 Is the Fed "Hiking" Into Economic Slowdown?

Last Thursday, when the Commerce Department announced that the 2022 first-quarter GDP dropped 1.4%, many market commentators voiced surprise. As many observers should know, after so many negative concerns this should have been far from surprising. Investors are in the process of digesting a plethora of concerns that have created ongoing crosscurrents for the markets. These have included but are not limited to:

This has provided the markets with enough sustenance to sustain a palpable correction. A decline of over 14% on the S&P 500 and even worse for the growth company-laden NASDAQ. As I have been trying to explain for months, the market has been telling investors that this year, growth would slow as evidenced by last Thursday's number. As a result, inflation should moderate.

In fact, the slowing is not confined to just the US, it's global. The Fed threatened to front-load their monetary tightening by raising the discount rate by 50 basis points this week and even more in the coming months. As the economy is already slowing, I doubt the Fed will need to carry through with its persistent hawkish position. They may raise the discount rate twice. If there is a third hike, it will likely be kept at 25 basis points. Moreover, the lock-down in China, the war in Ukraine, and the flare-up of yet another COVID variant should help accelerate the global slowdown. If this ends up being the case, by year-end, I would not be surprised to see the Fed reduce interest rates, a point few dare mention! You will notice that China has already started cutting rates and Japan is continuing with its own Quantitative Easing. This could force our stateside hawks to turn back into doves.

What is the risk of recession?

While the slowdown should accelerate and the risk of a recession has risen, available evidence suggests that the Fed will likely achieve a soft-landing. For one thing, the system remains very liquid. Basically, from corporations to individuals, many are still flushed with cash. Again, looking back at last week, GDP was -1.4%, but consumer expenditures rose 2.7%. Also, the feared inversion of the yield curve (when the 13-month interest rates are above the 10-year interest rates) has basically steepened, which is exactly the opposite of inverting!

So, let's go back to the stock market. Based on our work, the equity markets are grossly oversold. In fact, several of the breadth ratios are registering the most oversold readings on record. The next couple of months could continue to be rough for investors in addition to the Fed continuing to talk up interest rates. The sentiment backdrop is ideal as global investors are gripped by fear fleeing from equities and are sitting on a mountain of cash. Moreover, volatility has become excessive. These tend to be indicative of a market bottom and not a market top.

As a result, we are then set up with a confluence of positive possibilities; a dreadful first half during a normally lackluster mid-term year, catalyzed by the issues in China and Ukraine, and then WHAM-O!--a changeover in the House and or Senate and the normal rally in the third quarter going into the third year of a presidential term - normally the best one!

As the picture of the S&P 500 below clearly shows, this is not an uptrend but rather a continuation of a digestive move.

Currently, the global fund manager cash allocation sits near 5.5%, on par with December of 2008. Recall, that most US stocks and global markets bottomed on October 10, 2008. 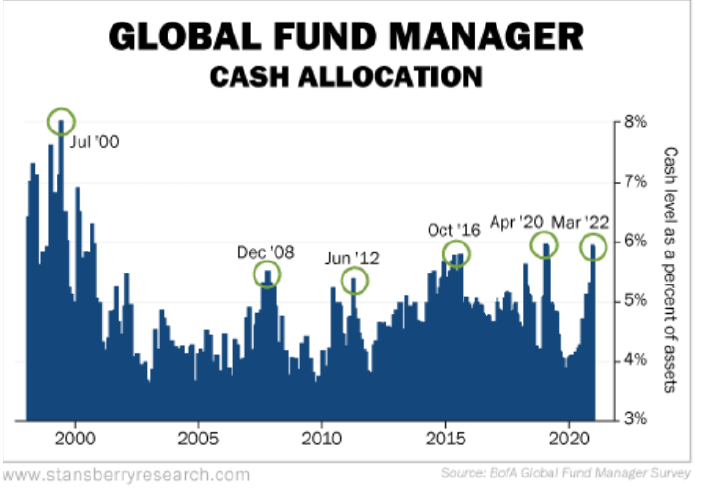 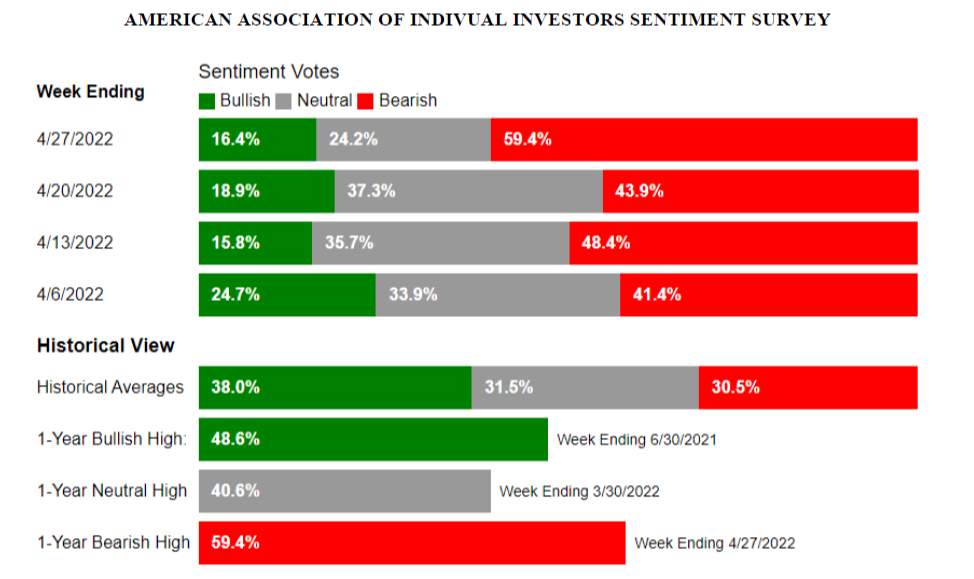 In August of 1990, the Bears reached a high of 61% but ended the month at 49%. April of this year it closed at 59.36% Bears, therefore, the highest Bearish month-end reading on record. And the Bulls a low of 16.44%, the lowest Bullish reading since July 1990. In the May letter of his Marketimer note, Bob Brinker says, "We expect a volatile and unsettled market at least into the summer season as investors grapple with monetary tightening, rising rates, inflation concerns, and the high level of geopolitical turmoil. Corporate earnings prospects, the lifeblood of equity valuations, remains strong and the outlook remains positive for rising dividends and a high level of company stock repurchase programs. WE EXPECT THE INDEX TO CHALLENGE THE 5000 LEVEL BY NEXT WINTER."  Next winter, which is only six months away, is projected to be 25% higher than where the markets currently sit.

Many investors forget that double-digit declines during a year are actually normal. After only one 5% pullback for 2021, the markets have provided an unfriendly reminder in 2022. In fact, since 1980, the average correction each year is 14/5, putting this year's 13% correction in perspective.

Taking this a step further, 21 times since 1980 the S&P 500 has been down double digits at one point from its peak with an impressive 12 of those years managing to come back and finish the year positive! In fact, the average yearly gain in those 12 years was a very solid 17%. What we have been experiencing is what is often termed a "growth scare trough." Nine months after a typical growth scare trough, stocks tend to be 25-26% higher. A 26% move off of the March 8th low would take the index above 5,200. this dovetails with Bob Brinker's Marketimer May comments above.

I want to end with a recent chart I saw regarding the November Midterms, the next major unknown in the US. As seen below, Democrats widely expect to no longer control both chambers of Congress. This would lead us to what is known as a "Lame Duck" presidency. For those that don't recall how this works out, it basically tends to end in gridlock on major issues. If neither party gives way, things tend to just stay as they are. The market, strangely enough, seems to like this as it knows exactly what it is going to get. It doesn't have to worry about anything major being changed and therefore just a few variables to be concerned about. 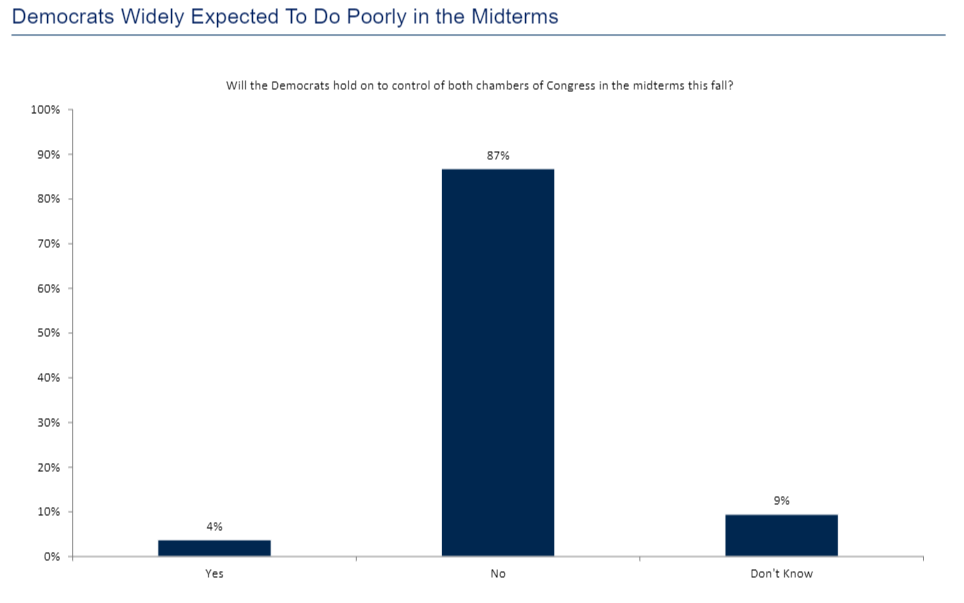 We are deep in the throes of first-quarter earnings, and even though many companies are coming out with nice reports, few are forecasting great expansion in the coming quarters. Does this sound like a situation where the Fed can continue to raise interest rates aggressively? I don't think so. Also, what if a tax cut were put in place to help companies affected by the supply-chain issues? There are many things that the Fed has at its disposal to achieve what it states as its mandate and at the same time facilitate some level of growth and the desired "soft landing" that is being dreamed of. We will continue to monitor the markets, and keep you informed about what we feel is most important to keep your eyes on.