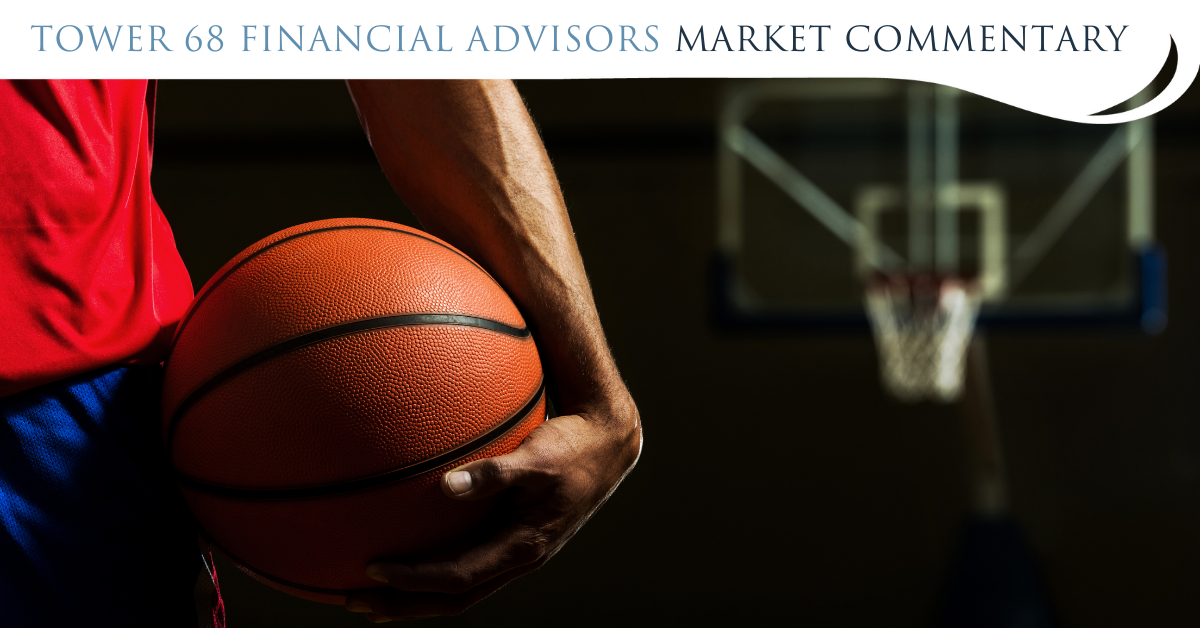 It's clear that the buzz of the last few weeks has been college basketball's Sweet Sixteen tournament, and Monday of this week was the last game of the season's Final Four. Needless to say, it was very exciting with Kansas coming from the largest first-half deficit in tournament final history to win! Let’s hope the markets do the same after a dreadful first quarter.

Although I’m not a professional sports commentator, I do have a bit of an expert opinion on the “Final Four” issues that appear preoccupying the media and the commentators as it pertains to the stock market:

1. Consumer Spending: As vaccination rates improve and variants become less threatening, we expect consumers to pivot from heavy durables and revert to spending on services. Also, with the supply chain congestion clearing up, one can’t help but wonder how companies are trying to strategize ways to rid themselves of their excess inventory before all the free money sloshing around gets used up.

2. Earnings: A perennial qualifier for our stock market “Final Four”, earnings drive stock prices over the long term. In the current environment, earnings are taking on more importance. We all know that earnings should remain strong, particularly after how strong they were in the fourth quarter, but can this continue to surprise the upside at the same rate? I don't believe so. I think that we have hit an interim high point in earnings and when short rates are hiked again, coupled with a little slower consumer spending and the lasting effect of higher gasoline prices, earnings could be a little muted.

It is exciting to think that slow growth/value companies have begun acting like growth companies and have stolen the spotlight a little. Non-financial profits grew 35%, the biggest surge since the 1950s. Partially pandemic recovery margins exceeding 13% are almost unprecedented. 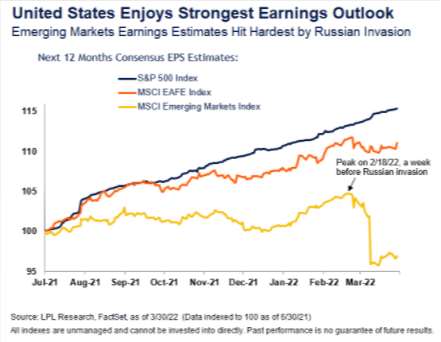 3. Interest Rate Inversion: I hear about the 2yr. / 10 yr. inversion (2 yr. rates being higher than longer-term 10 yr. rates) and I think it is the wrong one to pay attention to. In actuality, I feel it is much more important to follow the 13 week / 10 yr. relationship, which is actually getting steeper not inverting! The 13 week / 10 yr. has been much more accurate. I believe that the Fed must keep increasing rates- on the short end, but the long rates will begin to reflect a slowdown in GDP growth and will cause the flattening of the curve to happen, not necessarily a recessionary inversion to occur.

4. Inflation: The confluence of supply constraints and surging demand has made pricing pressures a big concern for markets, consumers, and policymakers. The Russian conflict has only made people stateside even more nervous and as a result, made things worse. In the end, the Fed really must keep raising rates to normalize interest rates and squash inflation as best they can. We all know that rates were forced to go below acceptable levels due to the reparations put in place to help with the economic halt during the pandemic and that, coupled with the helicopter money, is now forcing us to raise rates or who knows where inflation could ultimately settle out!

So, let's take a step back in time. This whole excess money and hyper low interest rates all began in 2008 when the Bush and Obama Administrations combined spent $1.5 Trillion of taxpayer money to "rescue" the economy and the Federal Reserve started Quantitative Easing. That blueprint of policy response to the Panic of 2008 was used to respond to COVID shutdowns. This time the Federal Government borrowed at least $5 Trillion to spend and the Fed increased its balance sheet by over $4.5 Trillion. Since the dollar remained stable and virtually every country in the modern world followed suit, what would logically seem to be an action that would create runaway inflation much earlier, actually took time to develop. Right now, inflation is 7.9% and the unemployment rate is 3.6%. So, while inflation is clearly here, signs of stagflation are harder to find! As I had said earlier, this doesn't mean that economic growth isn't being impacted- it is!. There are multiple forces to analyze and untangle to understand everything that lockdowns and government largesse have done. The economy was dramatically damaged by the lockdowns, but the morphine masked the pain. All the painkiller stimulus boosted sales and profits. This year, without new spending legislation and as the Fed starts to reverse course, the economy will lose its morphine drip.

So, this leaves the US economy in a dilemma of its own making. The way out is to cut spending, cut tax rates, cut regulation, and tighten money enough to stop inflation. Because in the end, policies don't create wealth, free and open markets do. When rates normalize and employment stays full, the Fed will have to pull more rabbits out of their proverbial hat that helps the lower-income wage-earners but doesn't disincentive the high wage earners from continuing in their capitalist endeavors. So, what are fund managers worried about? 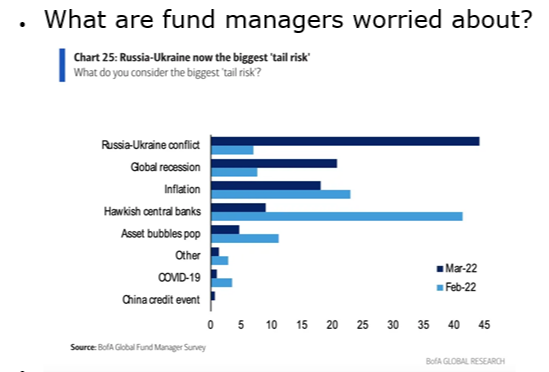 It seems that they are concerned most about the Russian / Ukraine conflict, but as has been seen this week, this is tending to stay contained in the area of Ukraine. The spillover effect is on the cost of agriculture, industrial and trace metals, and of course oil and natural gas. All these affect purchasing power, expendable cash, and measures of inflation. The fears of COVID and China have all but been removed from the equation.

Many are now fine-tuning their growth rates on 2022 GDP to a range of 2.5-3.5% in recognition of the economic dislocation caused by the war. To quantify, Russia and Ukraine provide over 30% of global grain exports and they are major producers of chemicals which are used to produce 40% of the world's potash, used in many fertilizers. Grain shipments are expected to experience disruption due to the war and although there is no wheat shortage in the US, wheat supplies are at their tightest level since 2008. Midwest farmers are attributing this to fertilizer cost explosion. Although the conflict has caused oil prices to move higher, the US remains close to energy independence, which is defined as the sum of all energy production minus net energy consumption. 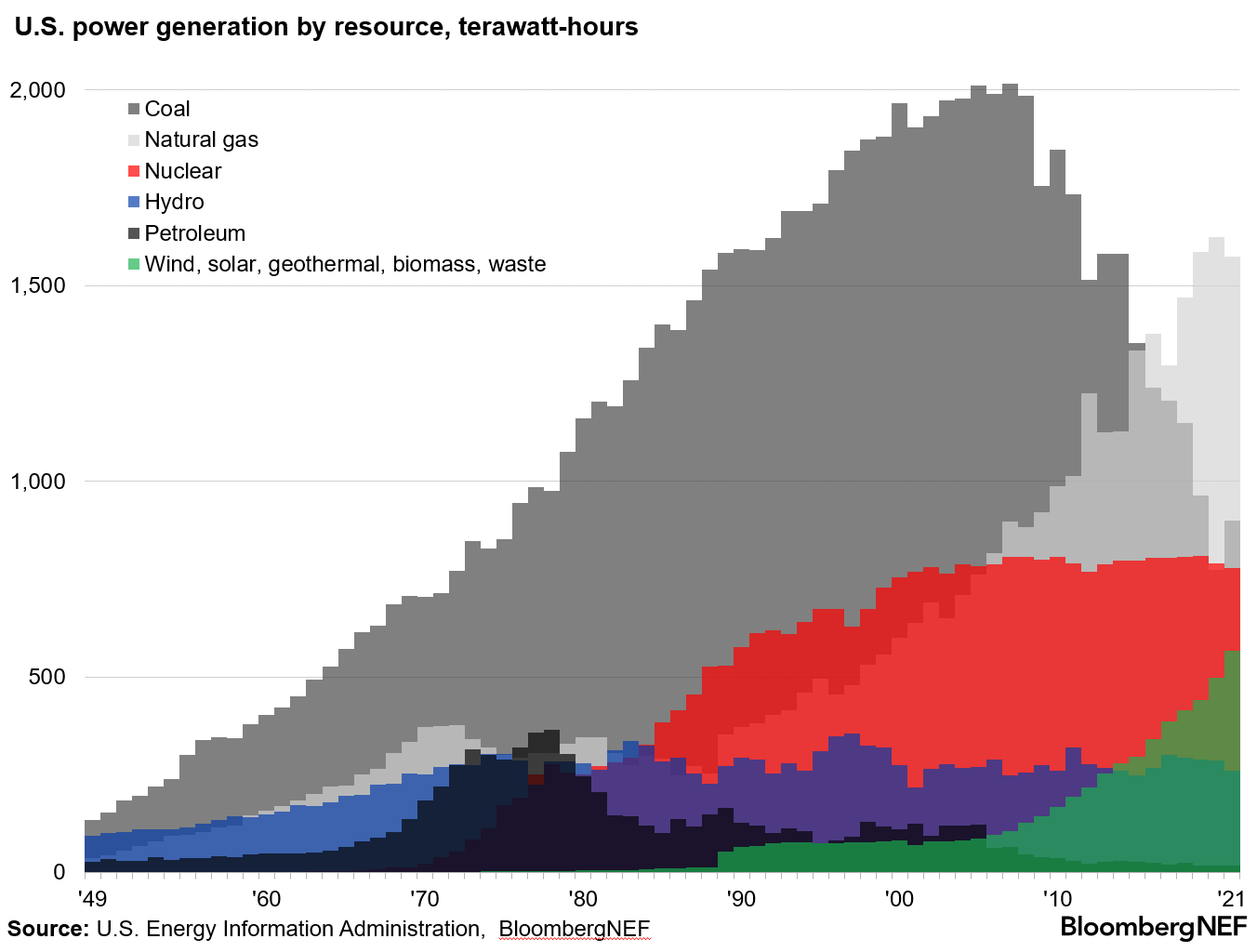 In 2005, the nation imported 12.5 million barrels of oil daily. By 2016, due to the success of the fracking industry, daily imports were down to 4.2 million barrels daily. By 2020, the US was a net exporter of 635,000 barrels daily. Due to production shutdowns (due to Biden administration energy conservation and ecological initiatives) during the pandemic, 2021 net exports were 165,000 barrels daily based on the Energy Information Agency. We expect energy independence to become more of a national security priority as the global geopolitical landscape remains unstable given Russian aggression and the threat that China poses to Taiwan. On top of this, there is the fear that the US Dollar as a reserve currency is at risk. If we were able to basically shut down the entire SWIFT system to an entire country and stop all access to US Dollar denominated sources of capital, the question becomes what this means going forward of our having "too much" control in the event of another future conflict. I am not saying whether Putin was right or wrong, but rather it was quite amazing how quickly we were able to shut off his financial oxygen!

Powell & Co. at the Fed believes the US will avoid a recession. Ed Yardeni says March 8th may have marked the bottom for the equities markets and investors should use stocks as an inflation hedge. He said, "The fog of war has masked the outlook, but the long-term bull market, punctuated by panic attacks, remains intact." Obviously, I agree!. Yet as we enter Q2 of 2022 investors are perplexed, confronted by the issues mentioned above. Still, stocks continue to act pretty well with the S&P 500 just 4% below its all-time high. Here are a few reasons for this:

Yet, even with all of these, investors and institutions alike sit with hordes of cash on the sidelines. Eventually, this cash needs to find a home as it is generating zero return as it sits. Time will tell, but the horizon seems to be telegraphing the end of the unknowns and frictional global issues, and as a result, emotional reticence should diminish.

I believe that deglobalization could make us seem even stronger as the consumer is becoming even more US-made conscious and concerns about being dependent on any level to forces and governments outside of the US is becoming even less attractive. Europe with its dependence on Russia, Ukraine, and China for energy and food could be heading down a road toward depression wrapped in inflation. They have no growth policy, and they are royally at the mercy of Russian energy pricing and Germany discontinuing its own energy production. The US is not allowing frivolous additional spending and in a few months, it will be too late for a democratic majority to continue to steamroll. Preparing for the midterm election should begin around May / June. We will continue to pay close attention and adjust accordingly.