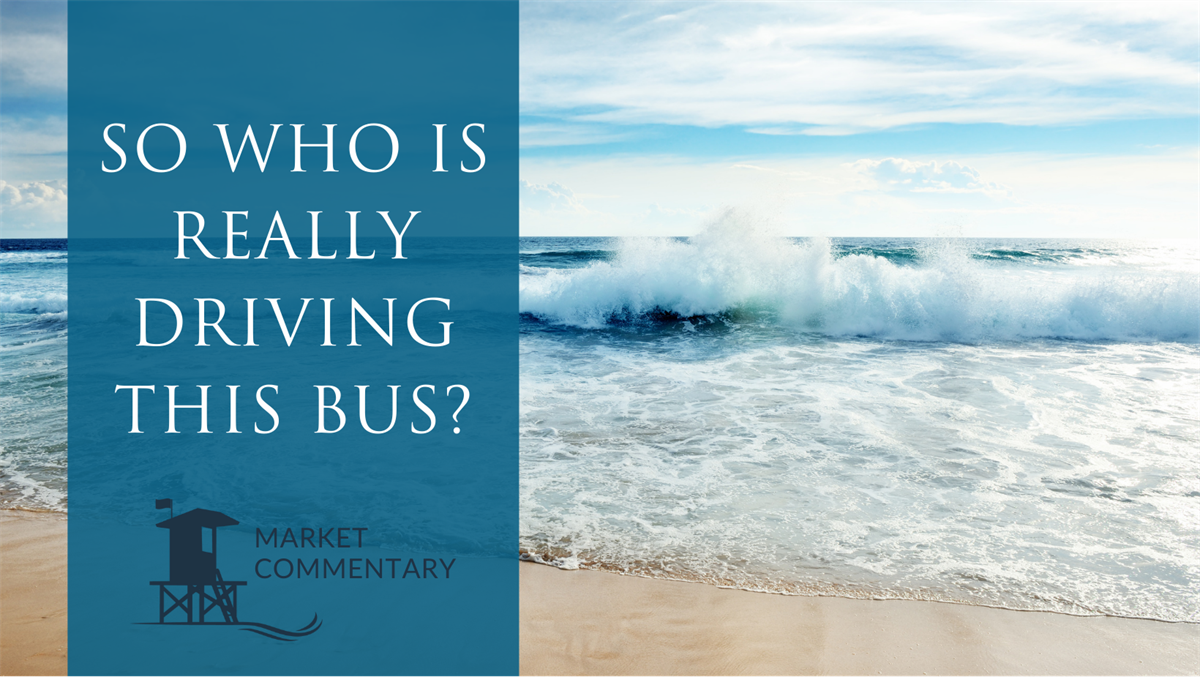 So Who Is Really Driving This Bus?

I've spoken about the major economic and international elements that seem to be shaping the direction of our US equity markets, but this week seems to be a little more tenuous. In my September 8th missive, I started out by talking about Evergrande's problems. It seemed incredibly strange to me that something paralleling the problems with Long Term Capital back in 1998 was going on in China and yet virtually nobody was talking about it.

True, Long Term Capital Management was dramatically smaller than Evergrande's issue today — the point is that it required the US government to step in and shore the financial structure up, as it very well could have created havoc in the financial markets in general due to the related exposure many companies had to the hedged fixed income investments this company was on the wrong side of. Today, in the case of Evergrande, in China, it is far larger and actually worse. Where Long Term Capital Management had exposure to fixed income in the area of $150 Billion, Evergrande is in the area of $600 Billion, of which the Chinese government is thought to own $300 Billion of the exposure.

On September the 6th, when the bonds of Evergrande stopped trading, it was clear there was probably a major issue going on. This slow-motion train wreck has been going on daily since then, strangely enough with very little fanfare from our major media sources. I believe that since there is a relatively low level of trust in the transparency of the Chinese financial system, this is not so much of a shock that it is happening, yet it is clearly a major shock when the pure magnitude of size is coupled with a rather frail global financial environment post-COVID. Just when the economies started to appear that they were getting back on their feet, every country of the world was basically shut down and commercial trade as we know it came to a screeching halt. The domino effect has been quite obvious from initial runs on basic paper goods to now basically no way to get a refrigerator or enough semiconductors for automobile manufacture. Eventually the Chinese government will either swallow or print their way out of this mess and it should be interesting to see how they explain their way out of it.

So why did the US markets have such a terrible beginning of this week and end to last week? I went into the fact that last Friday was "Triple Witching" (four times a year options on futures, index options, and stock options all expire on the same day), and this just so happened to fall in the third week of September, historically the worst performing month of the year. But there were a few other issues that were afoot.

First, and the reason for the title of this week's missive, "Who is really driving this bus?" The S&P 500 sold off six days from the previous week's new-high peaks to again test its 50-day moving average, just as it has done 9 previous times in the last year. Yes, 9 times! Coincidence? I don't think so. You may want to cue up a really eerie song right now, but if you were to look at a chart of the S&P 500 going back just to May of this year, you will see that it has come down, kissed its moving average line and bounced up to new highs 5 times. Friday being the fifth. This is what appears to be computer generated trading. Given that there are very few profitable places money can go right now other than large-cap growth companies as evidenced by the NASDAQ 100's consistent ascent, every time the index goes on sale down at its 50-day line, it gets gobbled right back up and continues higher.

This last week was a little different. Instead of the market coming down hard one day and bouncing the next, it came down around this 50-day line Tuesday of last week and just sort of camped out there. Since it didn't bounce like a super ball, as it has the previous four times, something had changed.

In this case, it appears to be a number of things that have precluded bounce buyers from jumping back in. First, as mentioned above was the extreme volatility that is normally associated with "Triple Witching.” Second was the Evergrande fiasco — truly large, but luckily not directly related to the US financial system. And lastly, this week's coming Fed meeting where there could be more color on the Fed's desire to begin to taper its lending and start to get the economy ready for interest rates to go higher. When all of these happen during a period that has had a high probability of being a low gaining period, it is a small wonder that sellers took control. I, for one, tend to believe that the machines do leave a footprint on the markets and when things look a little different than normal, many pull in their horns.

So, the next thing that I do is take some time to look at the most recent economic indicators and the short-term action out of the bond market, the currency market, and the precious metals markets — which are normally considered a flight to safety when fear is rampant. A week ago, we got a weaker-than-expected Consumer Price Index. This, to me, says that even though inventories are thin and there are more container ships sitting out there than I even recall during the height of COVID back in the second quarter of last year, prices at the consumer level remained tame. This was curious to me. So, I looked at the US Dollar and I noticed that it has been quite stable. This tells me that fear within the US is relatively benign, and then in looking at bond interest rates, rates on the 10-year Treasury have remained relatively stable a bit above or below the 1.3% rates. So, what does it appear to be going on? Well, as lackluster as it may seem, this is appearing to be a garden-variety digestion of a longer term up-move that has extended itself since March of 2020 without really much of a pullback and this is a confluence of negative events or impending unknowns that could cause investors to sell.

So, what do I look for next or what should one be thinking about? Well, to begin with, profitability is still quite good, inflation remains in check by most measures, interest rates remain low, we are at full employment, wages are increasing to some extent, and the thought of a recession is way off the table. All of this lends us to thinking that this could be a passing period of volatility. Could it get worse before it gets better? Of course!!! But in looking back at recent history, which is, again, what I would consider to be one of the best gauges, the market is now hitting the kinds of extremes that typically only occur a handful of times a year. The S&P 500 is around 2 standard deviations below the 50-day moving average, which hasn't happened since March 2020 COVID collapse. It's only the second time since then that the S&P 500 touched its lower band and that was at the low back in October of last year. So now we are at a point where buyers tend to step in. Since it has only been a short time period decline it could last a bit longer and be a bit worse, yet Monday's sell off showed the statistically significant extremes that tend to be associated with an interim low. I don't take this to mean it is time to throw caution to the wind, but it is a really good time to start to create a shopping list of things one wished they had taken advantage of before and maybe missed.

In the end, a sell off is never fun. We wish the sun stayed out and the water stayed warm always. But we know this is clearly not the case. What we do know is that, strangely enough, they have a sale at your favorite department store, and everyone is standing in line to buy. They have a sale on Wall Street, and everyone runs for the exits. This doesn't seem to make a lot of sense to me. Keep paying attention to your favorite fear gauges and then let things settle out a bit. Investing isn't short-term speculation. Look for great companies in great industries that are benefiting from the current environment of where the world is going and think about how these could help you achieve your personal goals. At this point, investing outside the US doesn't seem to show expected high probabilities and long dated fixed income are still at an interest rate that is not going to sustain a quality of life that many aspire to. So, think about really good companies. There will be a great time to take advantage of price levels, you won't know that the time was optimal until after it was. Fall is in the air, and it is football season. This is one of my favorite times of year. Hope you are ready for Halloween with the kids, Thanksgiving with the family, and of course Christmas, a time for giving.