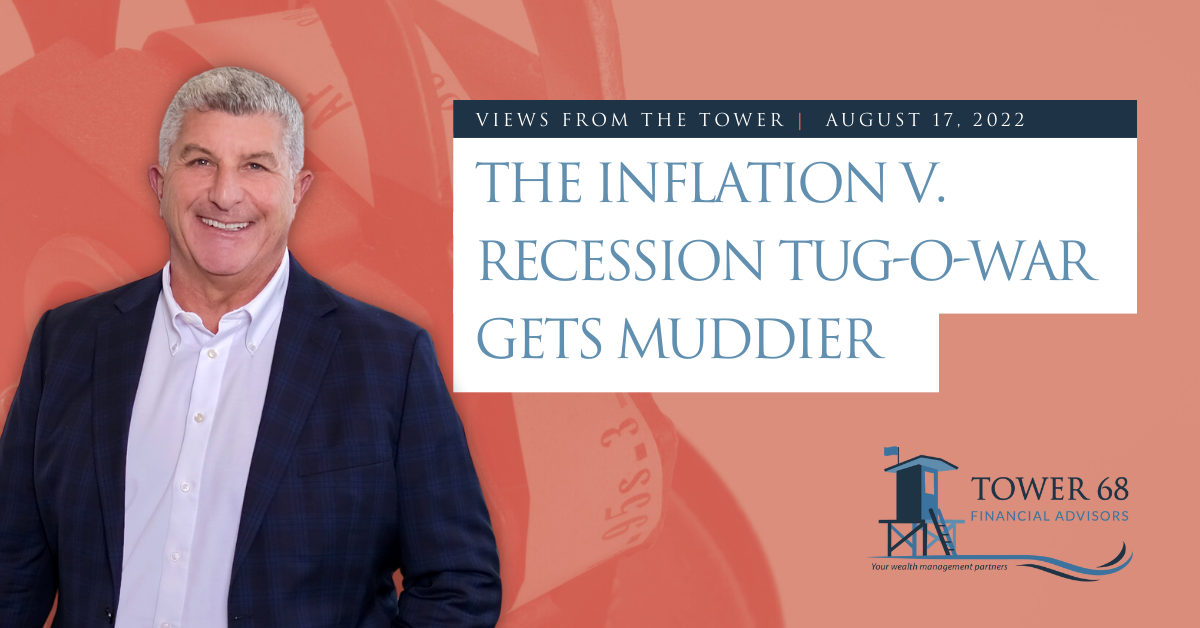 The rally seen in the equity markets post-CPI and post-PPI has been largely met with skepticism. This is essentially true of the gains seen over the past week and past month. Strategists are largely confused across the board in that there seems to be little agreement on where the market is headed after a very brutal first six months of 2022. After inflation readings came in higher than had been seen in 40 years, last week we got CPI and PPI numbers that were far more manageable, and as a result, the new "fear de jour" became that of a drastic recessionary slowdown as a result of two back-to-back interest rate hikes and the expectation of another large interest rate hike in September. This week followed up these domestic recession slowdown fears with Monday morning pre-market comments coming out of China. Prior to the market opening, China announced that data points on growth showed a faltering economy in the world's second-largest economy and as a result, they announced an unexpected interest rate cut. This sent stock futures lower along with the cost of oil.

This has taken fears of inflation in the US to a concern that inflation has peaked, and a slowdown is in the offing. I have a really hard time believing this given that we are down to 3.5% unemployment and rising wages. And, oh ya, the current administration just added an additional $729 Billion of stimulus to the economy. This doesn't sound like budget tightening to me. What we have is a clear separation from the need to raise the cost of money by the Fed, to suck up the inflationary effect of the massive capital stimulus, and make sure that the economy still has the fuel to keep people employed and prices in check. It seems that people have almost forgotten about the Russia/Ukraine conflict. It is almost as though many don't seem to care since it doesn't affect them directly. I think it is important to look back in history and see what normally happens to stocks when a geopolitical event occurs. Going back in time to 1941, this is how the markets shook and recovered subsequently. My point is that I don't expect this time to be any different. 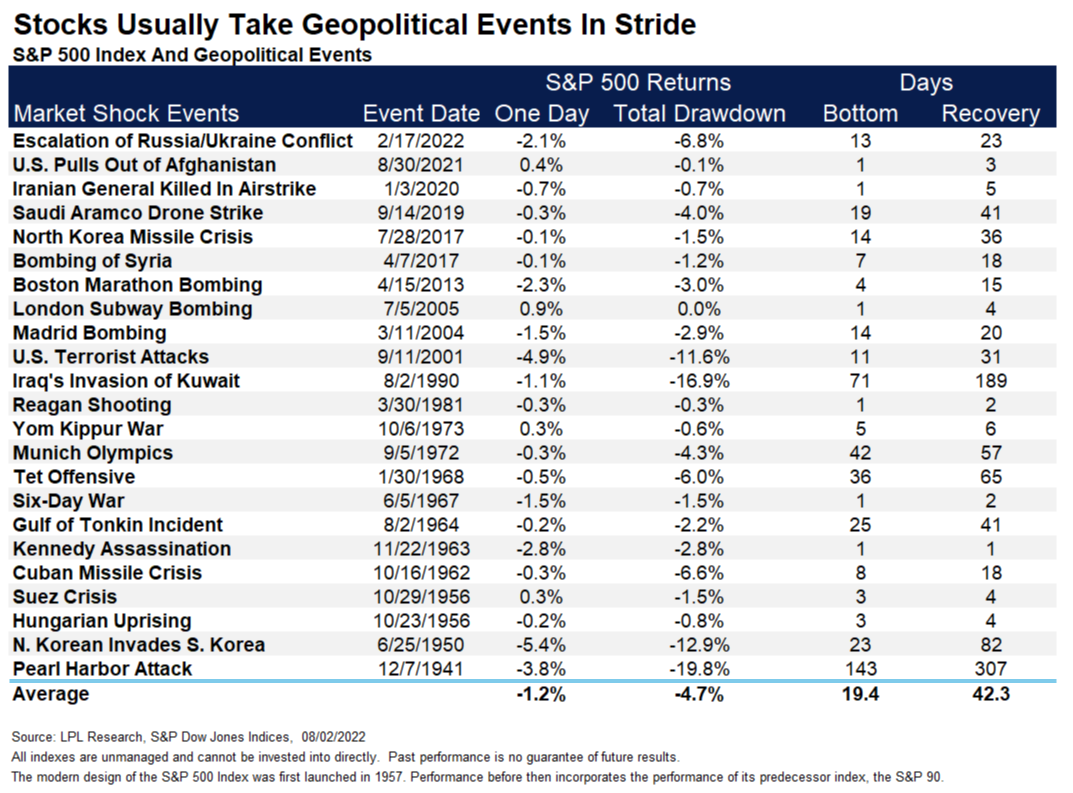 Before I go into the current measures of inflation in more graphic detail, I wanted to give you the most recent range of 2022 market expectations according to major Wall Street analysts. As can be seen, there are far from consistent expectations as Bank of America feels that the markets should crater once again and end the year at 3,600, whereas JP Morgan feels that the recovery in prices should continue and is looking for 4,900. I believe that this range of expected outcomes clearly shows that we are in a very unfamiliar environment and therefore a clear lack of consensus on expected outcomes. 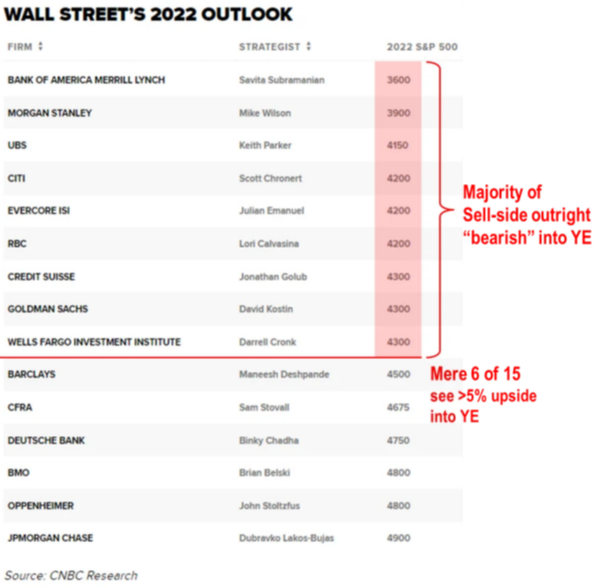 Given the magnitude of the decline that was experienced in the first half, I feel that a measurement of past dips going back to 1995 is relevant. There have only been three other times when the markets have dropped more than 20% from previous highs in the last almost 30 years. Each and every time the markets recovered. Better by an average of 7.3% within 3 months, 11.3% in 6 months, and an impressive 20% within a year's time. Hence, a buy-the-dip-style mentality is looking like what could be (at this point) a good strategy. In each of the three prior instances the point in time where markets were so oversold that on June 17th, there were over 73% of stocks down more than 20% from their highs and subsequently bounced. In fact, in the three previous occurrences, this level of decline marked a bottom. 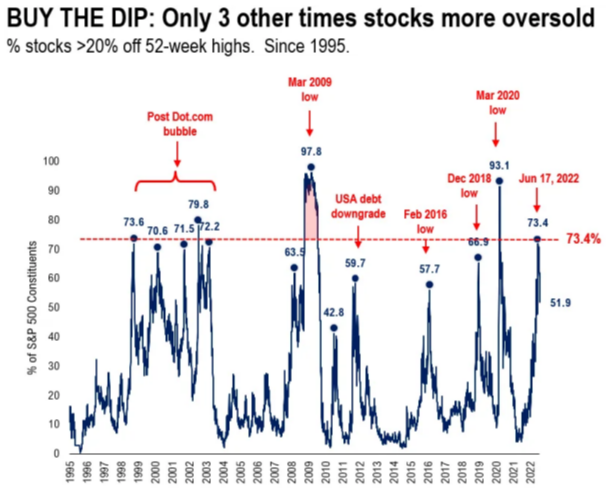 I wanted to take just a moment and show the progression of prices since COVID. I feel that this is important as it is clear that inflation appears to have hit its high point and we are now beginning to see price level increases slow down. In the first chart, consumer prices are seen (CPI), in the second chart, Producer Prices are seen (PPI). If this is truly the beginning of the end of the feared "runaway inflation" just maybe we can get back to concentrating on industries and companies that are managed best and in the end benefit from gaining market share and managing costs so as to excel in the next expansion. 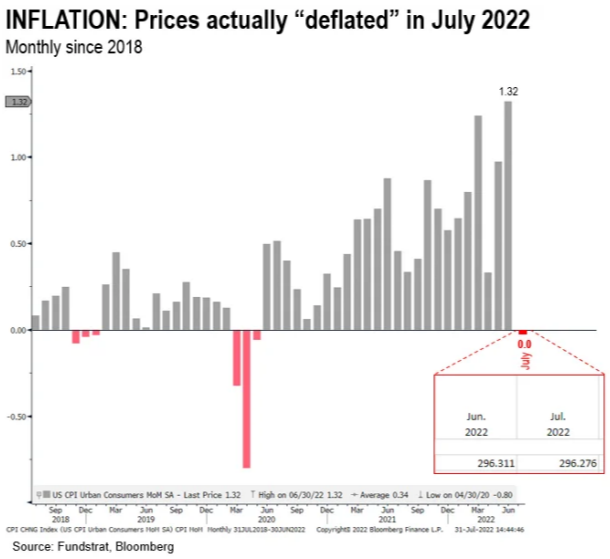 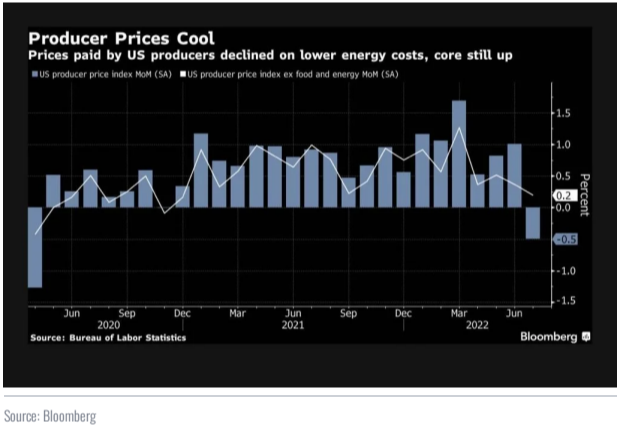 All of these pictures support a clearer understanding of why markets are where they are and where they could be expected to go, but I tend to look at things a little deeper than this. In my way of thinking, I tend to begin by looking at the biggest market in the world, the currency market. At present, the US Dollar is the strongest major currency. Even with inflation being where it has been, even precious metals have not been able to get a leg up on the US Dollar. I believe that part of the reason is that throughout the global economies, the US economy has shown a higher level of resiliency and recovery than the other major economies of the world.

The fact is, a recession has always been preceded by an inversion in the spread between the 10-year and 3-month U.S. Treasury yields, but not every inversion has ended up in a recession.

So if we look at the current relationship, two things jump off the page at me: 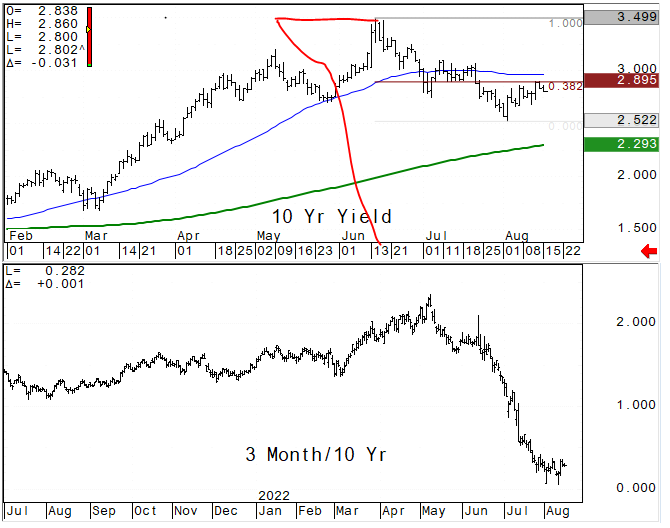 This would dovetail with the 1982 analog that I have included in the last two newsletters. According to Thomas Lee of FundStrat in 1982, equities bottomed nine weeks before the Fed even posited abandoning 'anti-inflation' tactics:

He went on to say that since 1942, there have been 14 bear cycles. The bear cycles were around 30% as long in time as the bull cycles. This is roughly a third of the length of time. So, he feels that this bear cycle has fit the length of time necessary to have run its course. This coupled with many other similarities makes Mr. Lee feel that this market could actually trade at new highs by the end of this year. All I can say is that if this is true, Merry Christmas to us!