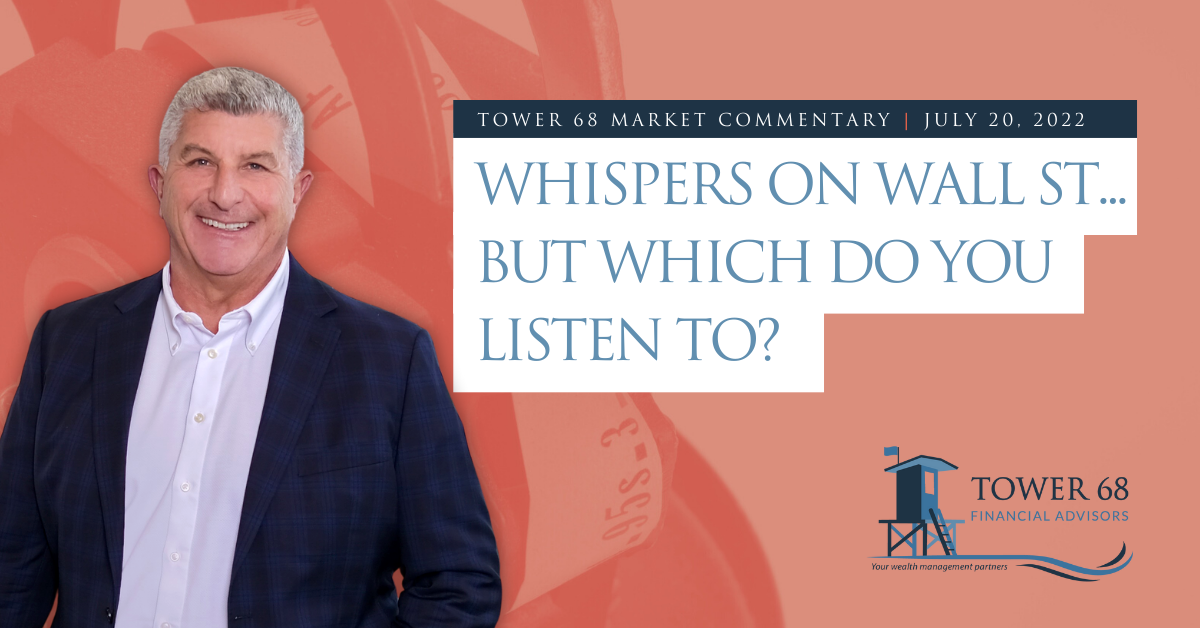 Whispers On Wall St... But Which Do You Listen To?

Last week looked like it was going to be another disaster of a week until it turned on a dime Thursday and was up strong on Friday. This week started out on the upside and then turned when Apple mentioned that it was going to reduce employee hiring. More and more, the markets are at a point where they react to seemingly every comment from leading companies in the US economy.

At the same time, the S&P 500 seems to be trying to put in a bottom and build a base from which to recover. The headline macro information and news headlines continue to incrementally impact the market as well. Among the noise, I continue to focus on the bigger picture issues that remain intact and give less attention to individual company issues. The current issues that remain front and center are:

I continue to advise investors to spend less time agitating over the day-to-day wiggles and keep their eyes on where we are going, which my research says is that the S&P 500 is likely under pressure until max pessimism for earnings gets priced in and we can finally begin looking forward to a more constructive outlook. Since I must say that there is virtually nothing positive being espoused by the media, MSN"BS" and CN"BS" analysts, it is very much feeling like the majority of the negativity is baked into the cake at this point. This doesn't mean that the market pullback is over, but it is the beginning of what the Fed needs to see? If it is, they can stop raising interest rates, due to inflation, and too much free money on the sidelines post COVID. The last thing that they want is to go from being seen as the culprit for too much inflation and then directly into the orchestrator of directing the economy into the jaws of a recession!

What I find rather strange is that the big 75 basis point rate increase that was done in June clearly hasn't had a chance to have its impact on the economy and now there is rhetoric being bantered about for another 75 basis points to be added this coming week. Sort of feels to me like the Fed was a little late to the scene of the crime and now it are trying to make up for lost time and stand a chance of raising too much. If it does raise too much, it ultimately will be forced to possibly ease these rate increases into the end of the year if a recession appears imminent. I mean think about it; the too robust growth in 2021, Fed-induced slowdown to curb inflation in 2022, and then giving it gas again at the end of 2022- all in the biggest economy of the world!

In the end, the point that I feel needs to be remembered is that the stock market is a discounting mechanism. Fed Chairman Powell told us in the middle of 2021 that he was going to take away the punchbowl, and the market continued to move to all-time highs. Now, the market seems to have no hope, and this could be the negative commentaries needed to precede a market recovery. Also, the statistics of what markets do after two consecutive quarters of decline have really been quite undeniable. 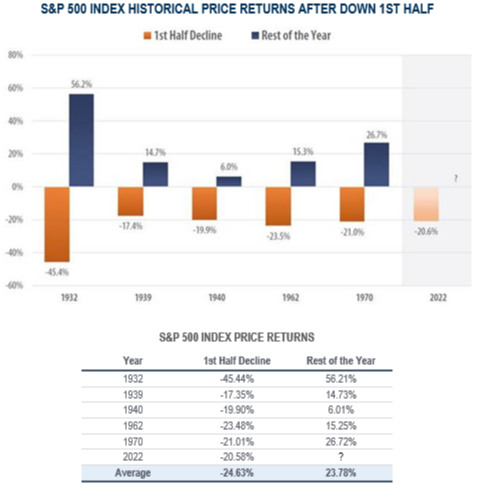 The next picture that I find particularly interesting is the one that compares the yield on 10-year Treasuries to the NASDAQ 100 Index. If interest rates stop going up on the 10-year it tends to infer that there is a slowing impending in the economy. This tends to be particularly positive for large technology companies (NASDAQ 100) as they don't need strong economic growth to perform. Also, with stronger inflation numbers released last week and rates didn't rise could also infer that we are approaching a high in inflation readings- possibly this could have been the highest set of numbers. We see this resilience to a negative news cycle as a market positive, especially for the lagging NASDAQ 100. Don't take this to mean that the lows are necessarily in, but rather that the market bottom is likely to form sometime towards the latter half of the current quarter we are in. I don't mean this to say that it drops much more between now and then, but rather that a market bottom that isn't event-driven (like the COVID six-week bear market), tends to be a process rather than an event. 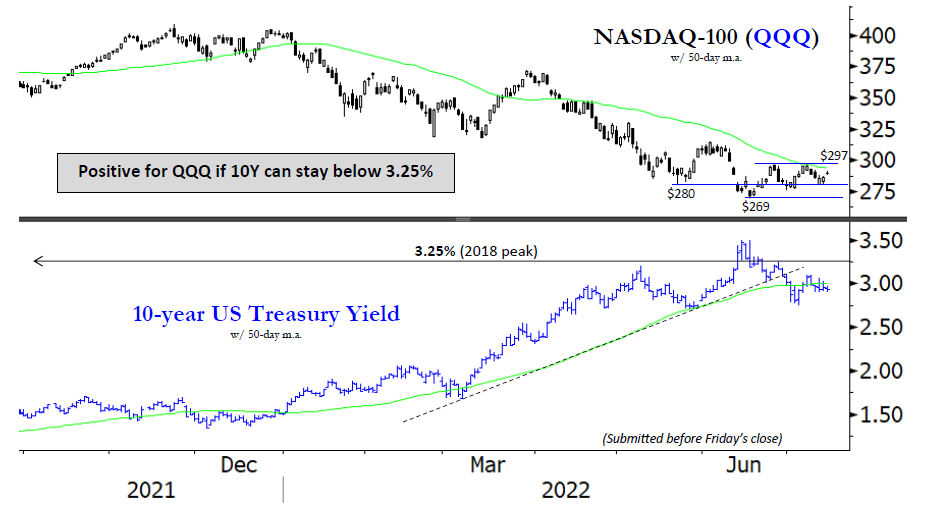 The final question being asked by all is about the timing of the end of the decline and when we could expect that recovery. In terms of timing, we are watching for a base building as I have mentioned above. As far as timing, if the US Presidential cycle holds true as it has historically, the third quarter of this year should begin the building of a base, and this could lead to an upturn in the fourth quarter. It should be remembered though that major market lows have occurred in October more times than any other month since 1932! So take a moment and look at the larger chart below that has a red dotted line showing what we have experienced in 2022 thus far, overlaid on the Presidential Cycle chart. Also, I have inlaid the months of market lows chart on top of this. I think that since things are happening faster due to information technology a bottom could be in the process of being hammered out quicker, but historical facts I find to always be a valuable guide. 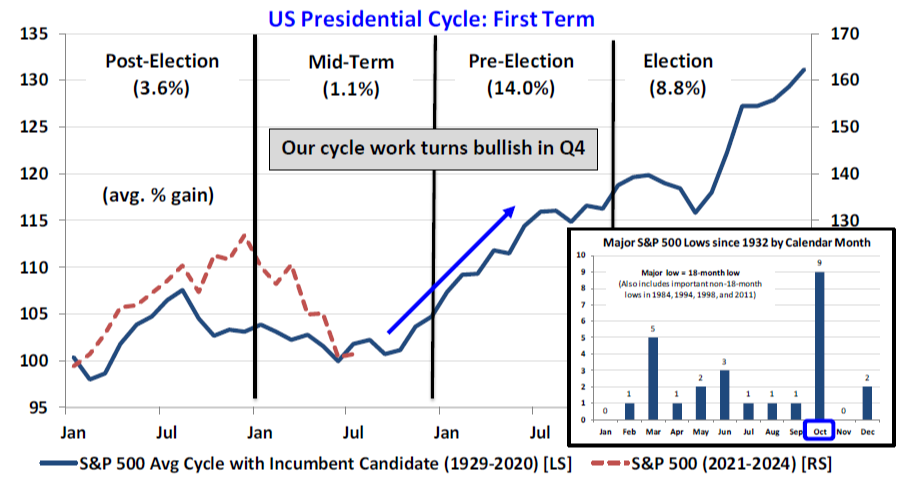 In closing, it really must be remembered that we have been through these types of corrections many times before. They all feel different each time as we are all at different places in our lives each time. But the fact remains, the markets finish their negative season and rise once again. We don't expect this time to be any different.