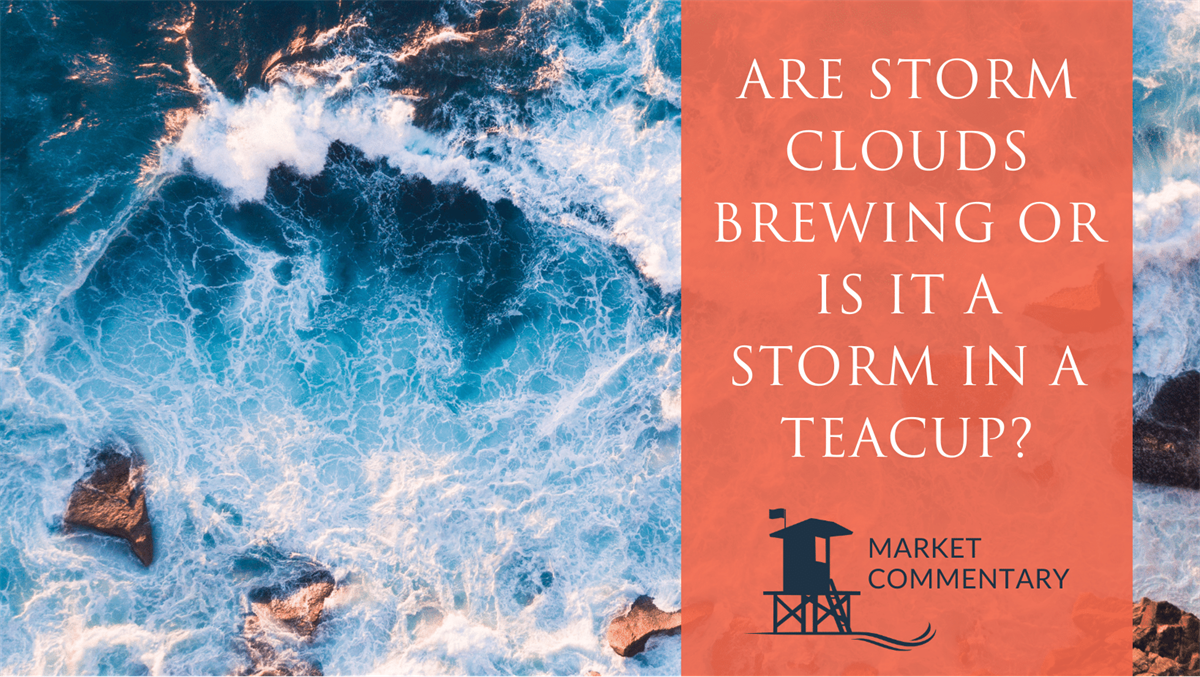 Are Storm Clouds Brewing Or Is It A Storm In A Teacup?

It's important to understand where the market has come from over the past couple of weeks. As I have noted in recent missives, the rally that we're seeing following Monday of last week's gap-down panic break on the "supposed" Evergrande news looks logical given how far stocks had come down off the peak the week before. In many cases, they had become quite overextended to the downside at that point. What is really important from a pure price movement perspective is that for a number of days the market had actually been quite on the defensive. Defensive to the point where, of the 40 sectors of the S&P 500, only 7 were moving in a positive direction. In looking at money flows, U.S. stocks had their worst weekly outflow in more than three years, with traders pulling $28.6 billion from U.S. equity funds in the week through September 24th (source: BofA & EPFR Global data). So, what it seems like in retrospect was that last Monday was more of an exhaustion move than anything else. The question then becomes whether it would rally for a short period of time and then roll over again in a new down leg or whether it would continue to rebound as it has the last 4 times and melt again higher. The market has seemed to condition investors to do the latter, but, quite possibly with all the other negatives, it might do another swoon to really get people's attention before the year-end rally we've grown to enjoy.

So, what exactly are we dealing with this week as a follow up to last week's heavier than normal volatility? I found the “What's Next” section of the Sunday New York Times particularly good at putting a bow around it. They mentioned three points: 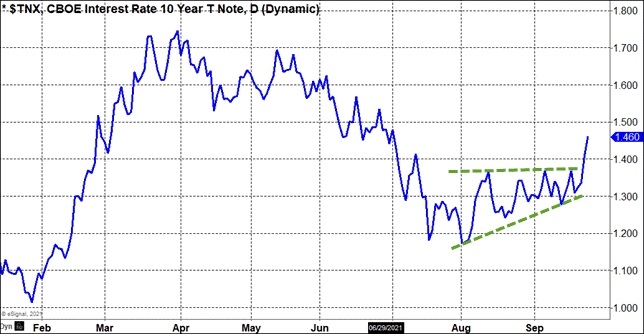 So, this brings me back to where we are domestically. In Powell's commentary last week, he made it clearer that he was prepared to taper, yet not ready to raise rates till sometime in the beginning of 2023. So, what happened? Well, this means that business is good, so the economy must be on the mend. What should we look for to support this? This is what we got:

So How Is An Investor To Deal With All Of This

The S&P 500 is coming off its most oversold condition since March 2020, leading us to believe last week's spike in the VIX (the volatility index) could be marking a turning point following a meaningful reset in many indicators. With the 10-year US Treasury yield also completing a base (and rising as I have said above and as can be seen in the chart I've attached), we think it's only a matter of time before the market's advance broadens again after a pause that refreshes. But one really must ask themselves if the market will ever really sell in this cycle. Yes, it certainly will! It likely comes in the first half of 2022, after the beginning of the tapering and when the inflation readings begin to ultimately force the hand of the Fed.

Along with this, there was a very interesting Twitter message I picked up on this weekend. You would really have to be a person that lives on the coast between Laguna Beach and San Pedro to really appreciate it, but there are currently in excess of 70 container ships anchored off the ports of Long Beach and San Pedro. To put the enormity of that number in perspective, that's more than the inbound container volume of the entire port of Long Beach handled in the entire month of August. It's roughly what Charleston handles inbound in four months and what Savannah handles in two. There appears to be no letup in sight of even more vessels arriving.

How does this play out? If the goods can't get off the ships, then there are fewer goods to sell, and if demand stays the same, this means that commerce could slow, and prices could continue to rise due to a lack of available supply even though we can see it right out there on the ocean. This spells stagflation! Inflation with stagnating economic growth. Not good! Remember, the true culprit of a declining market is a slower economic environment, and when coupled with higher costs of capital, this could be an even deeper slowdown. I certainly hope that the Fed is smarter than this, but it is what I am paying attention to.

Are we experiencing a Chinese version of a Lehman Brothers moment coupled with rising interest rates and slower consumer spending? Doubtful, I believe. The threat that China's Evergrande crisis poses contagion risk ignited a bout of volatility last week. Market conditions then firmed to end the week on a positive note, and I believe rightfully so. I think the Fed's accommodation is a key difference as well. Overall, equity internals continue to be defended, and while bullish inflection points haven't gained traction yet either, we think it's only a matter of time before the market's advance broadens out again. It is the worst calendar period of the year, true, but the S&P's decline, as measured against previous recent declines, showed that it was the worst pullback since March of 2020, and represented a high intensity low that was confirmed by the volatility index, interest rates and currencies. It seems almost a little too easy that the selloff happened, hit extremes, and then bounces like before, but stranger coincidences have happened. In looking at the small-cap indexes, which tend to reflect the greatest sensitivity to changes in the economy, they have been locked in a fairly tight range since January. This is quite a long period to just gurgle around sideways without so much as a spike to the upside or a swoon to the downside. Yet it has also provided this group of important companies the ability to enjoy a pause that refreshes while interest rates have remained low, cash balances have remained high, default rates have stayed tame, and earnings have continued to increase back to the growth rates they were pre-pandemic.

This brings me one last time back to the interest rate environment.

The question becomes, won't higher rates pressure the terminal value of high growth companies? Based on 12-month returns since 1928, performance by our growth composites doesn't turn decidedly below-average until the 10-year US Treasury yield rises above 4%. We are a long way from there, as evidenced by the above chart of 10-year Treasury rates. Yes, rates did spike post Fed meeting since late last Wednesday, but they are not sucking the oxygen out of the room even remotely.

In closing, I would almost like for the market to try and see if it could go down and test last week's lows, which would give us a chance to see where value lies and what to take advantage of. Unfortunately, what we hope for seldom becomes reality, and more importantly, investment decisions are seldom good ones based on "hope." This is a tough sort of no man's land between a Fed meeting and earnings season really not hitting its stride until the end of the second week of October. Put this on top of the fact that we have had another pretty good year in the markets, this makes it even easier for investors to take chips off the table. All of this may be true, but I am not seeing people getting prepared to put fresh capital to work on a pullback. Instead, the only question I have been getting is, "do you think that the decline last week is just the beginning of the pullback and is there a lot more weakness ahead?" When almost all people are on one side of the boat, it's probably best to move to the other side. The economy is still firm, rates are still really low, and cash is still quite abundant. Given other places to put one's capital, I really don't see a lot of opportunity for upside like I do in the US equity market.