Bringing 2022 Home: Trends To Watch In The New Year

In Friday's Wall Street Journal, the front page article read, Markets Just Don't Believe the Fed. It described the current tug-o-war between the Fed and the bond markets, namely 30-year fixed mortgages the spread between various maturity US Treasury yields.

"Making things worse for the Fed's attempts to squeeze inflation is that investors think rates will be cut not only earlier but also much faster than policymakers say. If the markets are correct, interest rates will drop almost 2 percentage points by the end of 2024 from a peak next summer."

Stated another way, investors, largely, think the Fed has chosen to raise rates too high and too fast which could plunge the economy into a recession which can cause inflation to go too low, which then forces the Fed to begin cutting rates again.

Jeremy Siegel, the Wharton School economist, expressed disappointment on December 15th towards the “Fed's hypocrisy on inflation” and predicted that Fed Chairman Powell will be forced to cut rates in 2023.

Specifically, Siegel called out the fact that when inflation was rising after the COVID pandemic due to the supply issues of capital, Fed Chairman Powell insisted that inflation was transitory and did not act against it via interest rate hikes. He was late in beginning the rate-rising cycle. Siegel feels that Powell is making the same mistake in the opposite direction today. Siegel was quoted saying, "I was very disappointed in Powell in his reasoning and justifications for this overly tight policy. He acknowledged that the housing data has lagged and that housing prices are going down, but we're not going to see it until the middle of next year. So, we're going to wait until the middle of next year before we decide whether we need to pause the rate hikes, even though we know it today?"

Currently, the markets are on the defensive. The Individual Investor Sentiment Index has been deeply bearish, on par with the lows seen in the Great Financial Crisis. This tends to be what it feels like to buy low! 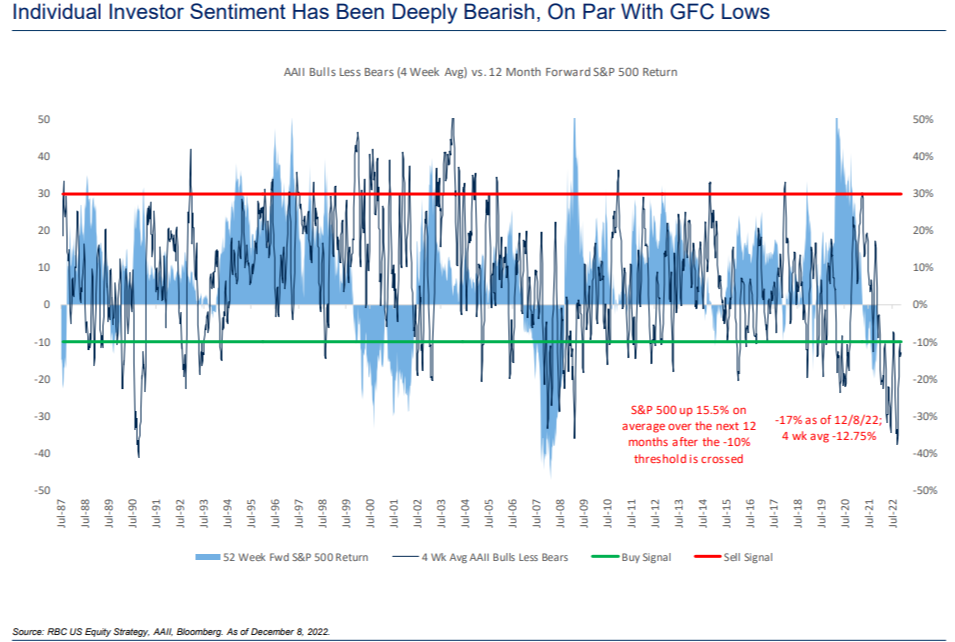 Thomas Lee of FundStrat Research believes that the returns in 2023 should be quite strong. He feels this should be the case as the Fed should start lowering rates sooner than they have stated to avoid the impending recession that appears almost sure to raise its ugly head. Lee gives many charts that measure what have been the causes of the market declines and how these are changing course.

The first chart is important as it validates the reversal of the supply chain issues born by China's continued zero-tolerance policy production and delivery shutdowns: 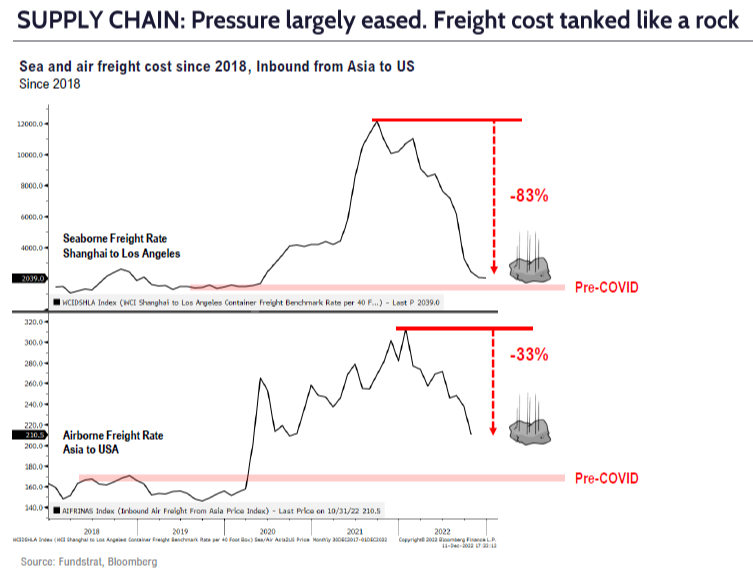 The second chart is important as it shows the course of oil and wheat prices due to the Russia / Ukraine conflict. At the onset of the war prices of oil and grains spiked, and since that time the inflationary pressure of these price hikes has round-tripped to levels lower than when the skirmish started. This clearly states that the slowdown in global economies is becoming far more of a problem than the inflation that is being addressed: 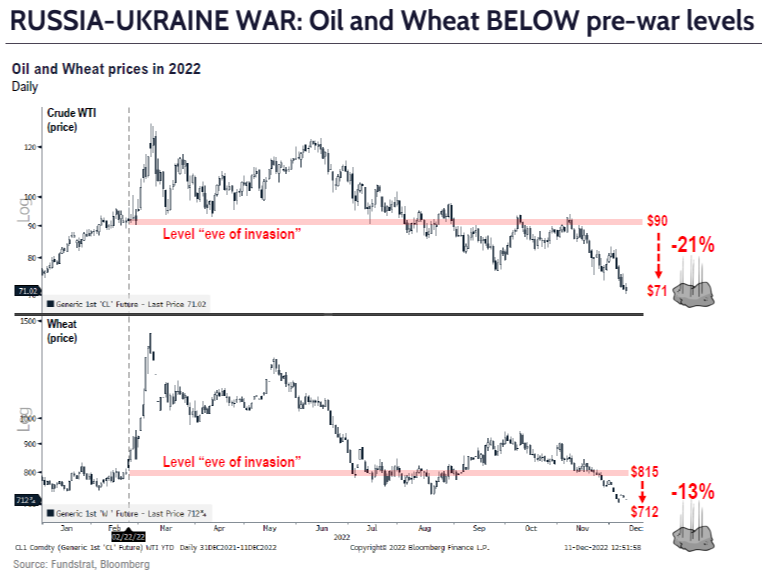 In looking at recent inflation measures stateside, the biggest measures of the consumer and the producers are the CPI & PPI measures. This along with apartment rent progression. This one is important as it reflects that the savings of the lower paid is almost gone and their ability to pay higher apartment rates is going away: 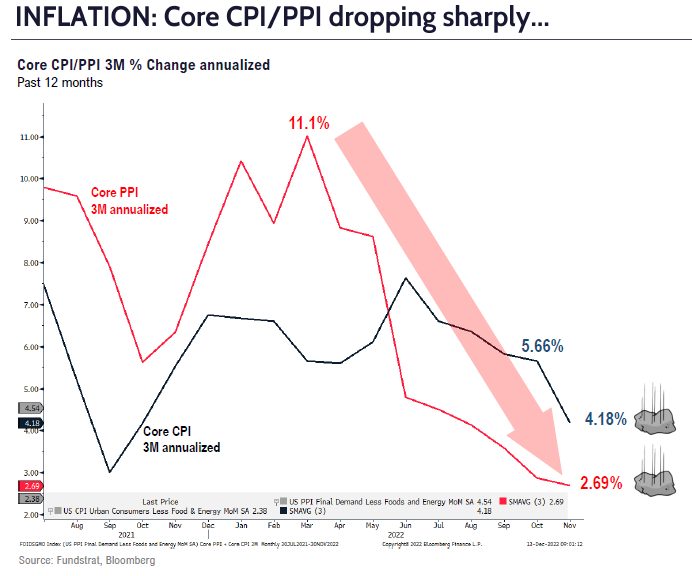 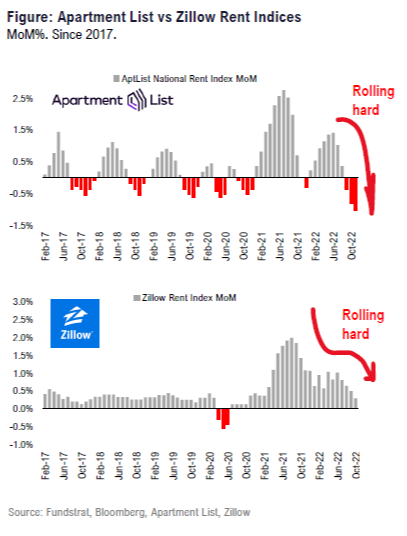 I believe that the influence of technology efficiency and deflation and the stay home economy have both changed the metrics of how labor rates and employment levels should be measured. There are far more job openings than there are unemployed workers. Is this because all companies are always looking to improve their employee pool or is it because labor is still too strong?

I believe that companies have become far more efficient and are always looking to improve their companies by either hiring talented labor that is either out of work currently or trying to usurp talent from competitors. Or could it be that measuring labor just simply isn't the right way to be measuring the direction of true inflation and economic growth? Only time will tell.

An important statistic that I would like to close with is how equity markets perform following down years in annual performance. Going back to World War II, there have been 21 years in which the equity markets declined. In 18 of these 21 occurrences, the markets have been higher the next year. Below is the exact actions going back to WWII, this is what the markets have looked like: 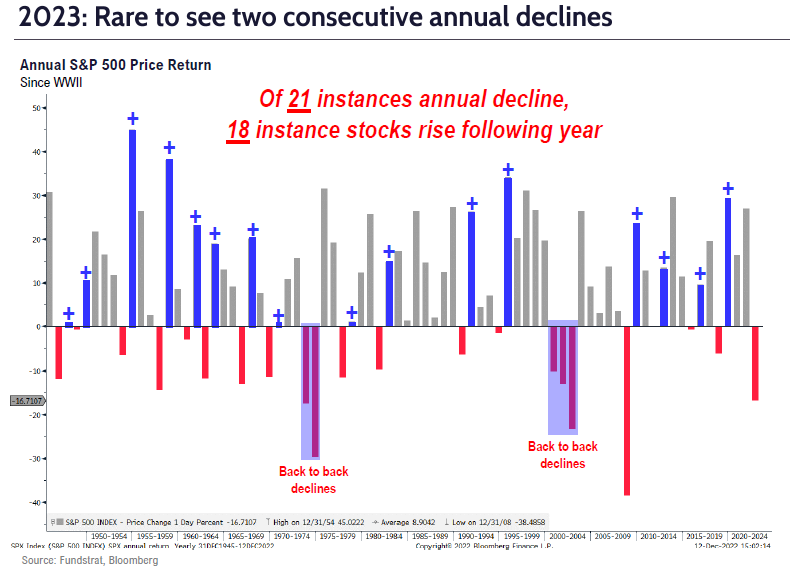 So, what do I want for Christmas? I want these measures of inflation to cause Powell to stop the rate hiking cycle quicker than stated in the December 13th meeting. Should he do this, and the US Economy can avoid a painful recession, then we could end up with a ferocious recovery in the markets. This one could be so strong and so quick that it could leave the greatest number of investors flat-footed, waiting for an opportunity on a silver platter.

As is well-known, what is most wanted or agreed upon tends to not be the outcome that is seen. The measures of inflation in the Wall Street Journal article mentioned above tend to telegraph the future better than the comments of the Fed. If this is true, in 2022 the bond market called the Fed actions well ahead of the Fed. And if this carries into 2023, the bond market says the Fed will soon turn dovish. That could be very good news for equities: 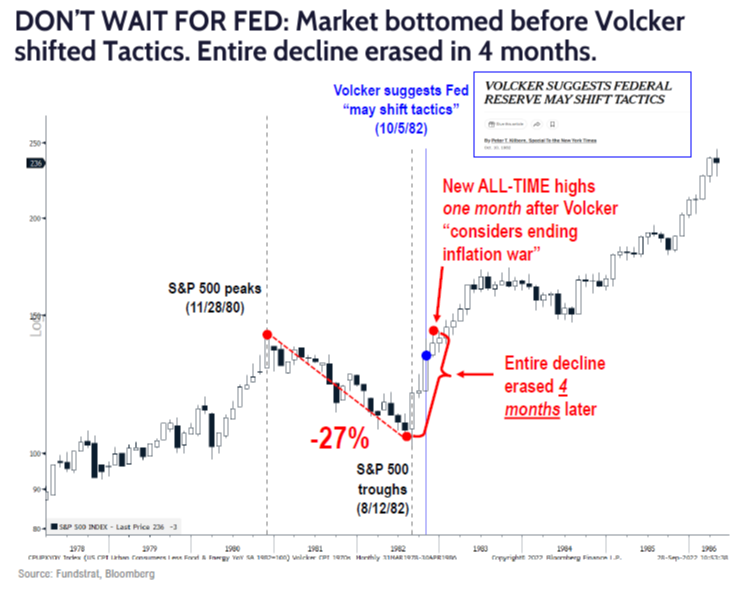