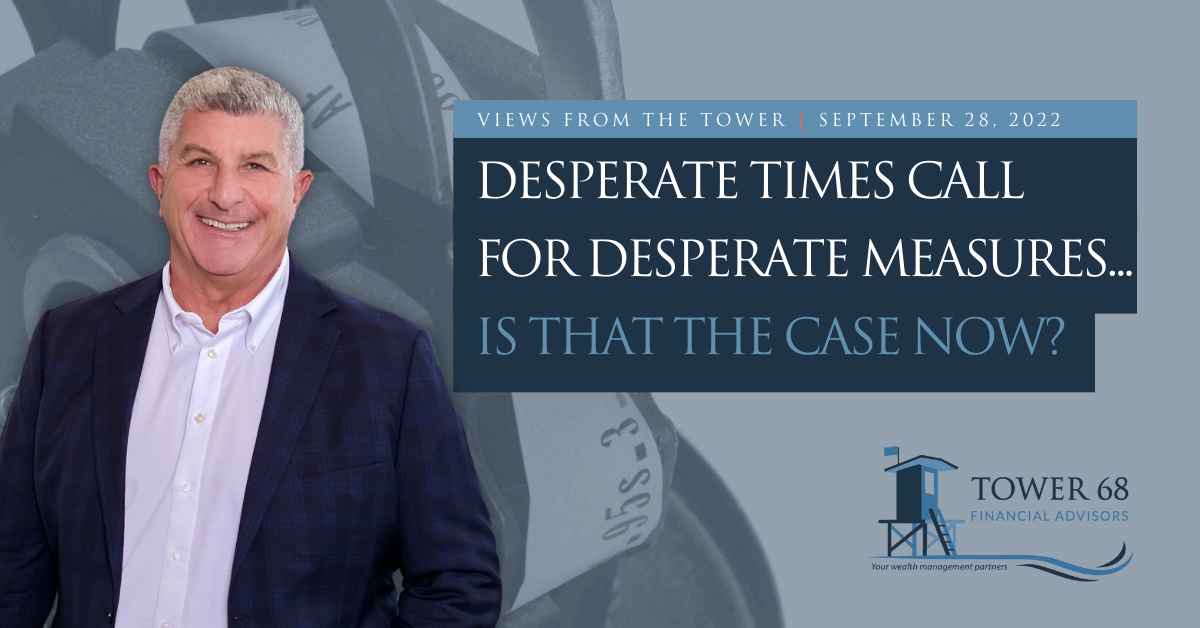 Desperate Times Call For Desperate Measures... Is That The Case Now?

To say that 2022 has been a tough year would be a gross understatement. From remnants of COVID mandates to delayed air travel to spiking interest rates, this has been a year of numerous and never-before-seen combinations of issues that we have all been forced to deal with.

The reason why I have titled today’s note as I have is that we have experienced difficult times before. The huge difference this time is that today we are at full employment, record earnings, and rising wages. All of these tend to be signs of a strong economy. Yet, spiking interest rates and inflation, coupled with intense media negativity have overshadowed the good.

What has changed and has been the biggest issue for the global markets has been the yield on our US Treasury debt and the resulting effect on the US Dollar. Since Fed Chairman Powell came out in his September Fed meeting with a third 75-basis point rate hike in so many months the entire yield curve has spiked to multi-year highs. So, I wanted to really clarify this point and then address its effect on the stock markets of the world.

Fed Chairman Powell stated, in no uncertain terms, that he intends to raise the cost of money (the Fed Funds rate) to an extent to "break the back of inflation." This has translated into not only short-term rates coming up, but also market-based rates from the 2-year maturity all the way out to the 30-year maturity.

This has been very destructive to the economy not only in the real estate sector but also in short-term lending rates to small businesses and commercial lending. Many short-term loans are variable and based on a margin above LIBOR. 10 months ago, LIBOR was at approximately 0.3%. Today, the 3-month LIBOR sits at over 3.6%. If the margin above LIBOR is the average of 3.5%, this means that rates went from 3.5% to upwards of 7% in a matter of 10 months! At the same time, borrowers have recognized asset value declines, so they have ended up getting walloped on both ends.

The US Dollar has appreciated by almost 20% vs. a basket of currencies so far this year. Now, if you are traveling to Europe this is wonderful as everything there is at a 20% discount to this time last year. But if you are a company in the US that exports goods and services to Europe, you have passed on a 20% cost increase to your customers over there while getting the same amount here. This is because their currency has weakened, and they can't buy as much. This is not a good thing and is having a very negative effect on multinational US businesses.

In Barron's two weeks ago, Jens Nordvig was quoted as saying, "People have predicted the dollar's demise every year- for the past 40 years." Clearly, this is not happening. Even gold and silver are declining at a rapid rate in US Dollar terms due to the greenback's strength.

The truly negative aspect of this is it forces an additional shift towards deglobalization. Germany has shut down the majority of its electricity production just prior to the Russia/Ukraine conflict and now they are faced with rolling blackouts and unaffordable energy due to blockades to Russian energy sources. China still has a closed capital account and controlled equity market: it doesn't have a free allocation of capital, and its growth engine is collapsing.

The rest of Europe, like Germany, is facing the biggest energy crisis in history, and this is occurring going into winter when heating from fossil fuels is needed the most.

It has been a very tough year for both equities and bonds. Actually, there was a statistic released last week that year to date, a 60/40 blended portfolio has had the worst return in the history of investing! 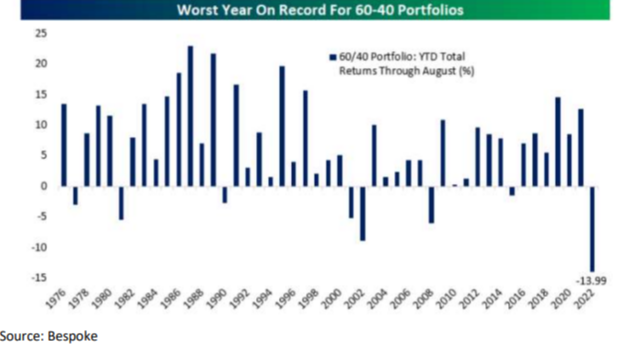 Just about every indicator (and I've shared most of them with you in previous notes) is at extremes to the downside. We all know that the end of September and beginning of October tend to be treacherous, but that if the markets have been weak, coming out of this period has led historically to very outsized recovery returns on most US equity markets.

In fact, according to Jeffrey Saut of Saut Strategy, "the recent selling 'stampede' has been particularly brutal. Stampedes typically last 17-25 trading sessions and as of Monday we were at 28, so we are clearly due for some level of bounce in the markets. I believe that since stock market negativity has coincided with rising interest rates that it could be more difficult for the equity markets to recover if we don't get some respite from the rise in market interest rates.

According to one of my favorite market strategists, Ari Wald, Chief Technical Strategist, Oppenheimer & Co., "indications of extreme pessimism offer an opportunity for the long-term investor." He goes on to say, "The Fed's commitment to fighting inflation (the medicine is a near-term negative) appears to be pressuring markets more than the actual threat of inflation." 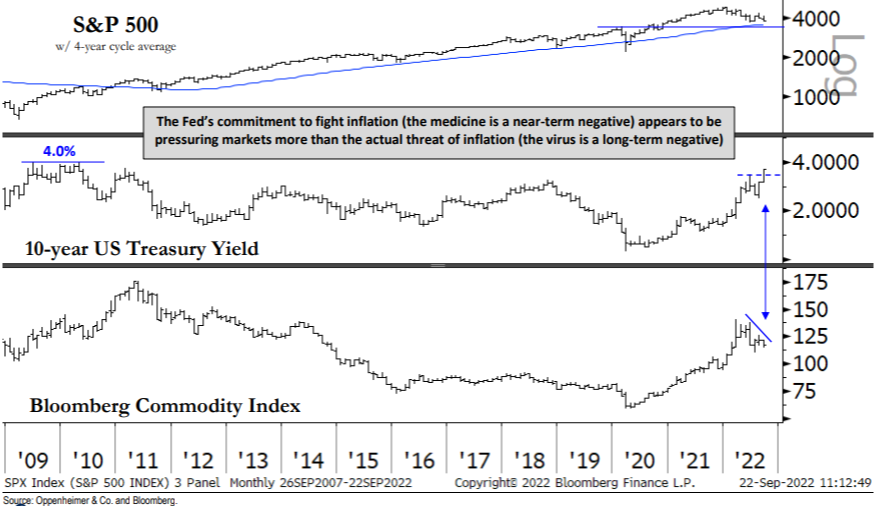 This is the point that I was making about higher rates having preceded market declines at the beginning of this note. This is actually what it feels like to buy low!

Ari's Sentiment Composite, an aggregate of four popular surveys, has fallen to 8% bullishness- the most pessimistic reading since March 2009. British financier Nathan Rothschild (1777-1836) is credited with saying that "the time to buy is when there's blood in the street." By Wald's analysis, composite signals below 10% have been followed by above-average S&P returns since 1987. 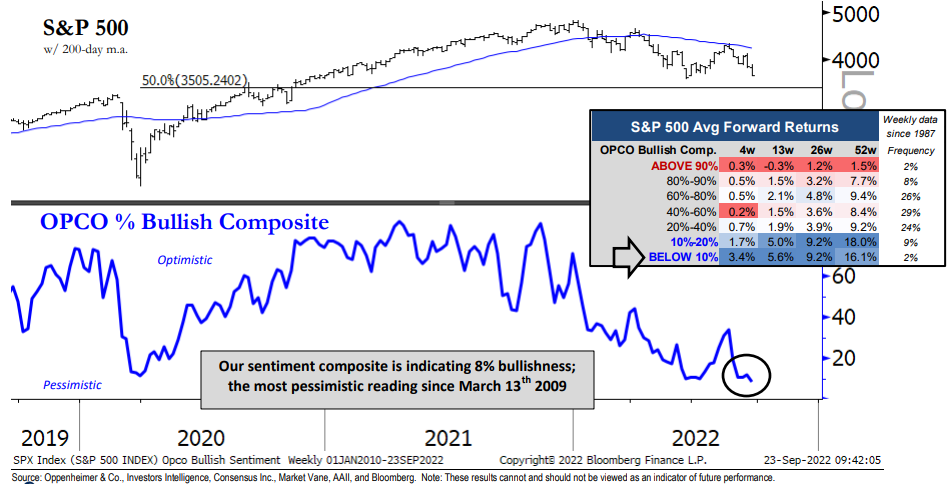 In closing, we have no way of knowing when this market correction will end. I have given historical, statistical tables in past reports showing what could be expected when it is done. I have also shown that historically October 9th tends to be the day that contractions like we are experiencing, seem to be the exhaustion day.

We also know that late September and early October tend to be the toughest time of the year. So as investors, we are prepared to get back on the offensive should indicators change, yet at present, the environment of the markets is still difficult. I will continue to keep you informed on what we are seeing. Please don't hesitate to contact us with any questions you may have as times of adversity tend to end up being also times of opportunity.