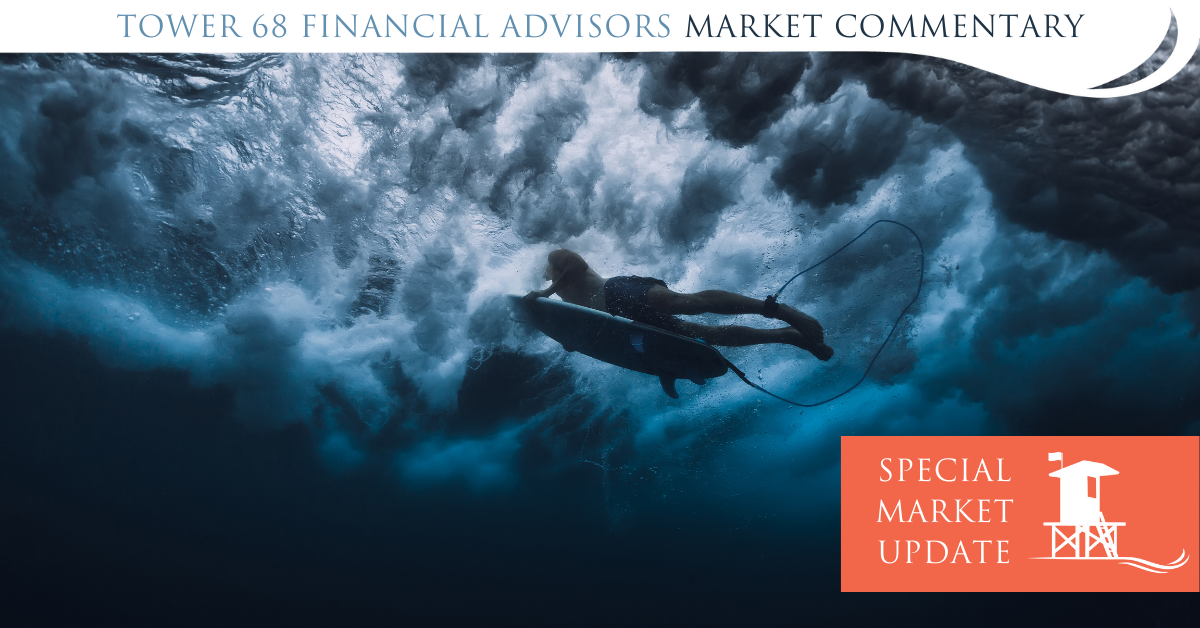 There is so much going on right now that I’m not even sure where to begin. By now, anyone plugged into the news and financial markets should have a rough idea of what has been happening:

The two charts, I feel are the most important two things to really follow right now:

Since the recently announced sanctions on an economy as large as Russia’s are unprecedented, no one really seems sure what they will mean. It might be a while before we find out. If Russia is shut out from the global economy for an extended period of time and capital is locked up within it, there is potential for it to be even bigger than something like the fall of Lehman Brothers. From what I’ve read, a comparison to the days after Lehman’s collapse may be apt, as investors and companies across the globe are trying to figure out what exposure they have, who is on the hook for what, is collateral worthless now, etc. And what happens if Russia responds by shutting off Europe’s oil and gas supply, escalating their attacks by nuclear or cyber means, or even invading another non-NATO nation?

There is a tremendous amount of uncertainty, and no one really seems to have the answers. I certainly don’t, which is why I think all we can really do is watch the markets and try to adapt to the new information they provide on a day-to-day basis. Coupled with the pictures of price moves that I have attached in this Special Report, is the simple fact that we have no idea of just how much the investment world has changed since the beginning of the year. Bluntly, we have no idea of what’s-what on things as mundane as corporate earnings, the potential for Russian asset write-offs, and the impact of rising costs on just about everything on profit margins.

A close friend asked this week if I thought the move in Oil was an overreaction. I don’t believe so. For one thing, even before the Russia/Ukraine war broke out and Russia’s supply had the potential to be impacted I thought Oil prices were likely going much higher. I’ve written about it on almost a weekly basis for several months now — the fact that global demand is likely to exceed global supply in the coming years and prices would almost have to rise. Even now, not enough is being done to boost that supply and, in fact, active steps are being taken to make it more difficult for supplies to increase (e.g. two weeks ago the Biden administration indefinitely froze new decisions on new Federal oil and gas drilling). The Russia situation has only accelerated a move we were always likely to get and exacerbated the underlying problems while shining a spotlight on the fact that energy security is paramount. See chart below:

Given recent news events, everyone has seen firsthand that world governments can seize personal assets, suddenly decide fiat currency transactions are frozen, or, essentially, take any actions they want to take since they’re the ones with the power and armed forces behind them. That doesn’t exactly instill confidence in the global monetary system or make people want to hold all their assets in ways that can be seized or frozen by the whims of the government at any time with no recourse. Is it any wonder then that Gold and Silver are taking off?

As I have shared in several charts over the past few months, if we have, indeed, seen an inflection point reached where commodities have entered a long-term bull market, the moves could only be getting started. So, while I wouldn’t want to go from 0% exposure to 100% exposure while commodities are so extended, I will reiterate once again that they are likely the best hedge for volatility and weakness in the stock and bond markets in the environment I believe we’re now in and everyone needs to have exposure. PLEASE TAKE A MOMENT AND LOOK AT THE COMMODITY INDEX CHART ABOVE. I am NOT SAYING that we are due for runaway inflation on all levels, but we are still deeply entrenched in global economies flush with Government-given cash and a historic event where supplies of virtually EVERYTHING have been disrupted.

Risks are always elevated, and news and sentiment seem to be the worst near a major low. So, if you’re equating “buying opportunity” with trying to buy near an important low in something like the S&P 500, you are going to have to buy at a time when risks are elevated. As Warren Buffet so eloquently has been quoted, “Be fearful when others are greedy, and be greedy when others are fearful.”

So, is it time for fear?? That is the point of the is Special Report. Please see both the “Bottom Checklist” as so eloquently penned by Ari Wald, Chief Technical Strategist, Oppenheimer, and a clear chart of where we are from the Bull/Bear Ratio: 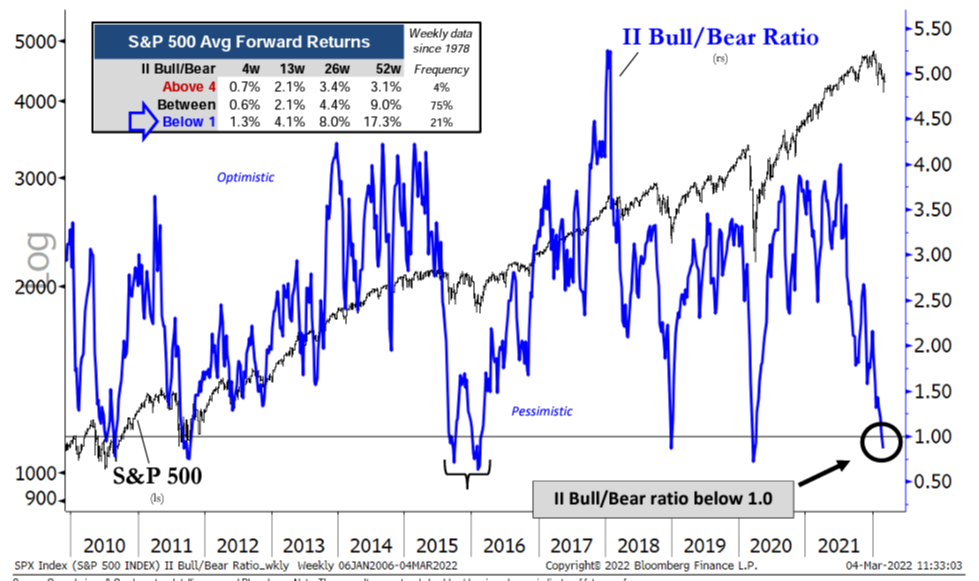 Please note the small table in the upper left-hand corner where the forward returns are listed over a 4-week, 13-week, 26-week, and 52-week period. When this reading goes below 1 (as it is now), the forward returns are really quite impressive. This “could mean” that if today is truly a period of fear, opportunity could be presenting itself. All of this is well and good, but you really, really need to make sure that additional equity exposure is consistent with what you personally should be doing for your individual situation.

In short, with macro risks elevated and rallies continuing to be sold into, there is potential there for the indices to continue to go lower and if they do end up breaking their recent lows then we could see the selling accelerate further. Yesterday’s low in the S&P 500 was almost right at the band two standard deviations below the 50-day moving average on the S&P 500, so it is already oversold. Meanwhile, sentiment is incredibly poor, some of the poorest we’ve witnessed in years. Last week’s NAAIM Survey indicated the average investment manager is only 30% long stocks, the worst reading since the COVID Collapse. With such bearishness and oversold readings, there is certainly potential there to get a tradeable bounce, and I continue to follow prices of the US Dollar, Gold, Oil, General Commodities, and Equity Indexes across the world for possible changes or continuations.

For now, the path of least resistance is lower for Equity Indexes and higher for Commodity Indexes. Until this changes, caution is of utmost importance!