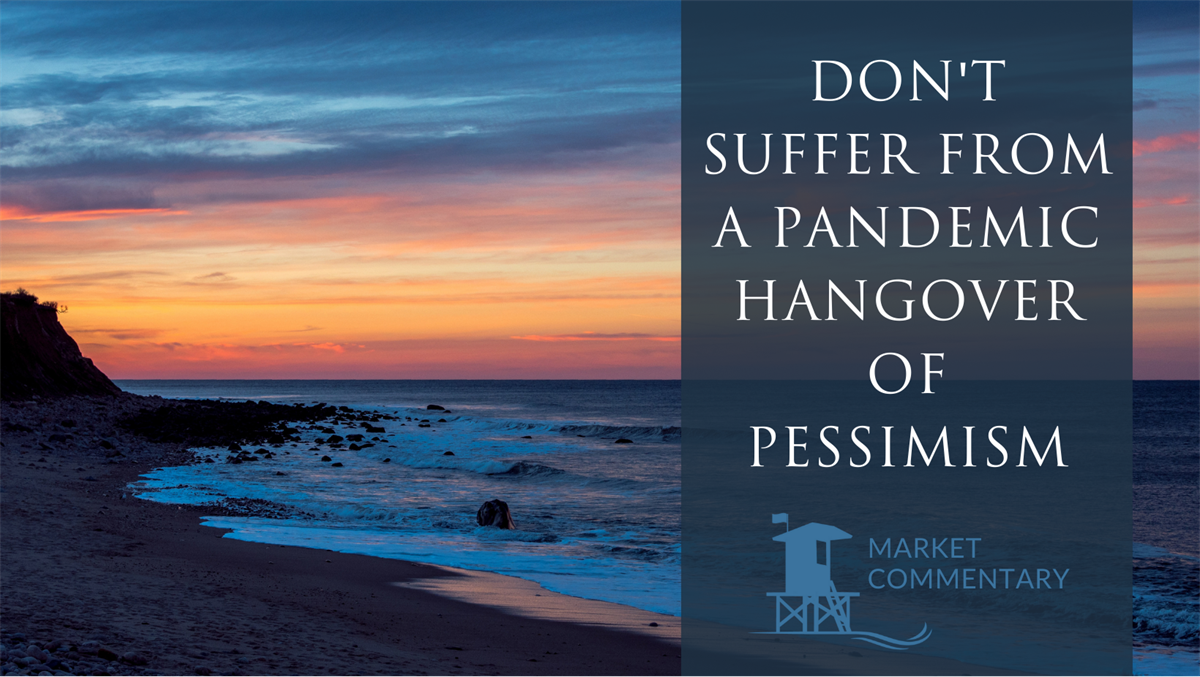 Don't Suffer from a Pandemic Hangover of Pessimism

Adding to that sunny disposition, late Friday the House passed the more than $1 Trillion bill, which is expected to be signed by Biden within days. The bill will have $550 Billion in new spending and includes spending on roads, bridges, public transportation systems, waterways, broadband, and EV charging stations. It's expected to be paid for by redirecting unspent emergency relief funds and strengthening tax enforcement when it comes to cryptocurrencies. The Congressional Budget Office says this legislation would add $256 Billion to projected deficits over the coming 10-year period. As we kicked the trading week off, investors seemed to be focused on which companies should benefit from the US infrastructure spending. Entering this week, we are reading that China's energy crunch is abating, supply chain issues may have peaked, and Monday, the US lifted the pandemic travel ban on international visitors from over 30 countries that has been in place for 19 months.

This is why it is far more important to listen to the money (the action out of the markets) than it is to listen to the relentlessly negative media. As we entered this week, at Monday's close, there were new highs in Small-Caps, Mid-Caps, Large-Caps, Transports, Energy, Financials, and Utilities, just to name a few. Basically, the earnings, the indexes, and the economy are appearing rather healthy. Funny how this was already underway even before the pandemic mandates were lifted and the new stimulus was passed. 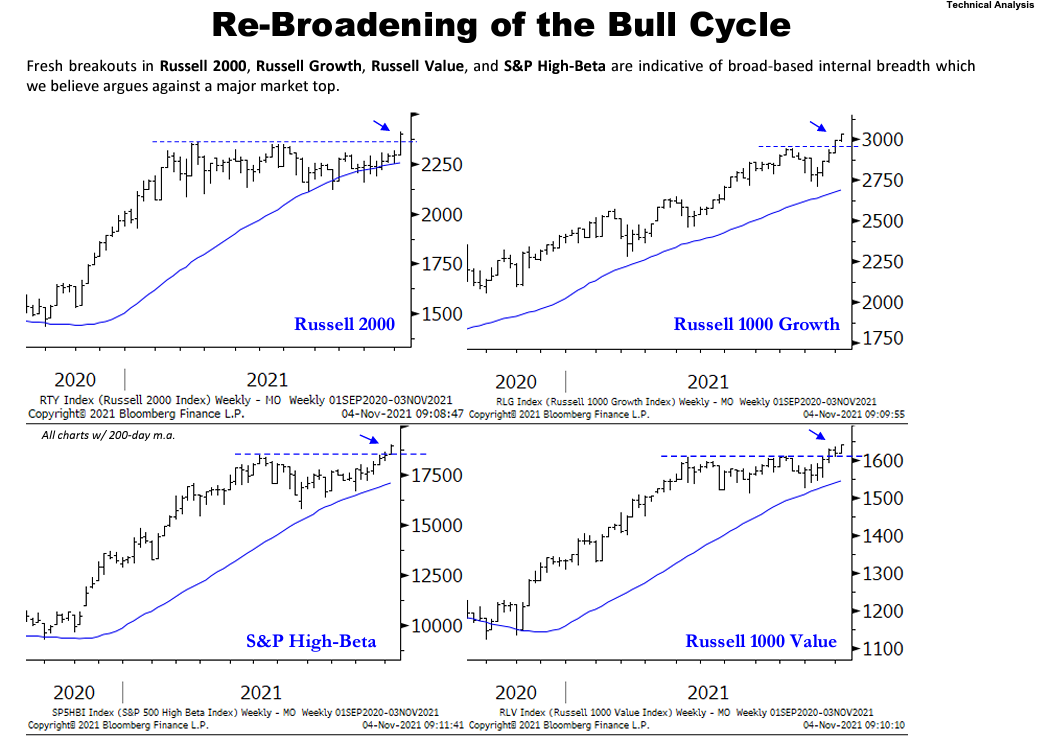 Very little mention has been made of the Fed meeting last Wednesday — that sort of went out with a whimper. The Federal Reserve is "watching carefully," for a troubling increase in wages, its Chair, Jerome Powell, said on Wednesday, but he noted that the central bank did not see such a trend of runaway inflation shaping up. We have what I consider a very interesting situation. Last week, the Fed basically said that it was going to start with the Taper and is not that worried about inflation. Labor numbers were what I considered super strong; unemployment is down from 4.8% to 4.6% — yet the media is all abuzz about how we are suffering from "underemployment." They are saying that a great number of people are basically throwing in the towel and not trying to get back to work so they are no longer considered part of the "measurable" workforce. On Friday, the employment number was looking for employment to improve by 440,000, the number came in at 561,000. I say, wow! That is a significant difference.

At the same time, wage rates and hours worked stayed stable — inferring little inflation on the cost of labor front. When I look at the 10-year US Treasury rate, I see it dropping from 1.71% down to 1.44%. This isn't close to the 1.21% it bottomed at earlier this year, but clearly it isn't signaling runaway or expanding inflation. At the same time, I believe we need to pay very close attention to the price of oil, as it is often considered the true depiction of industrial demand/inflation for all countries that have major industry. See chart below of interest rates and oil. 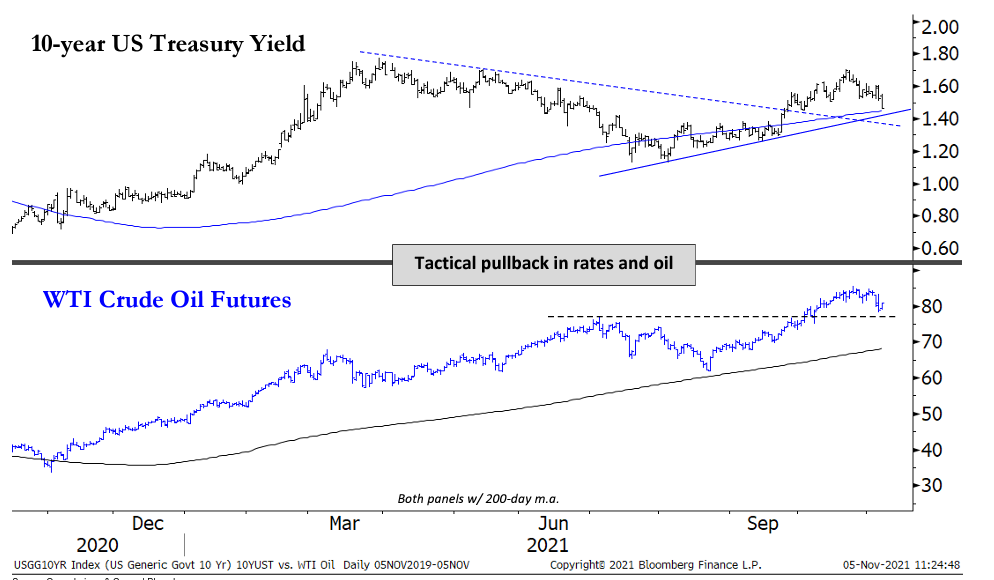 In the New York Times, the article that explained the conundrum was titled, "As Wages and Inflation Duel, Fed Watches."

On the cover of the paper Saturday, the article of interest was, "A State of the Union Both Bitter and Gloomy." Wait, I thought everything was looking good! They went on to expound about the virus, the masks, the vaccines, and, of course, the relentless infighting in the Democratic Party. "Despite many signals that things are improving — the stock market is hitting record highs, hiring is accelerating sharply, workers are earning more, and COVID hospitalizations and deaths are dropping from their autumn peaks — many Americans seem to remain stuck in the "Pandemic Hangover." More than 60% of voters in opinion surveys say that the country is heading in the wrong direction — a national funk that has pummeled Biden's approval ratings and fueled a backlash against the Democrats that could cost them control of Congress in next year's midterm elections. In more than two dozen interviews across the country, voters ticked off a snowballing list of grievances that has undercut their faith in a president who ran on a pledge of normalcy and competence: The chaotic, deadly pullout from Afghanistan. A spike in migrants crossing the southern border. A legislative agenda stymied by Republican opposition and Democratic infighting." They went on to say that normal life was not back and might never be. And voters said so many things just felt worse.

In the Wall Street Journal Saturday, they looked at it a little differently. They posed the question, "When Will Employment Be Back?" They stated that the Fed is unlikely to raise rates until a bigger share of the workforce returns. This is the point of "underemployment" that I had mentioned earlier. They stated a very interesting statistic that I had been pondering. "But the share of people aged 25 to 54 working — the so-called prime-age category that is mostly unaffected by extended schooling or retirement — is still low. For this group, the employment-to-population ratio is 78.3%, which compares with 80.4% in February 2020. To bring it back to that pre-pandemic level, 2.7 million people in the prime-age group would have to be employed." Since there appears to be no more Pandemic-Relief in store for the unemployed, it should be interesting to see how long it takes before this number improves. This I found really interesting. If there is still a fairly large number of "prime-aged" people in the workforce still available out there, it may take those 2.7 million to be re-employed before wages start to show inflation as workers are coerced to leave their current employment for greener pastures.

This brings me to a small missive from one of the most interesting, seasoned market commentators of today, Leon Tuey. Mr. Tuey said, "Since the day of Homo Erectus, humans have been given to worries. They probably worried even before Homo Erectus. Survival instinct and self-preservation are probably the main driving factors. They worried about how they look; they worry about the weather; they worry about their job; they worry about everything under the sun. What does worrying beget you? Worrying doesn't solve your problem. Faced with a problem, deal with it and get on with your life. Since life is finite, every moment you spend worrying, you are destroying your life. Investors are forever worrying. They worry when a stock goes up and they worry when a stock goes down. They worry about Covid, Tapering, Inflation, Stagflation, ad nauseam. Instead of worrying, it might make more sense to LISTEN TO THE MARKET — not the gum-flapping headline writers."

I started this letter talking about how earnings are coming out: quite well. I talked about how prices of the markets are acting: quite well. I talked about the supposed out-of-control inflation which seems to be moderating: quite well. In a nutshell, there are always things to worry about, but it really seems to make more sense to see how "The Money & The Markets" are reacting to these worries, take some time to evaluate the direction of interest rates, the US dollar, oil, and commodities, and then make an educated analysis based on a continuation of a move or make changes based on a change the direction of these major, underlying, and voiceless indicators. This is what we try to do.

As we move into the end of the year, how is your portfolio? How is your personal debt structured? How is your retirement savings plan working — are you funding it enough? All of these points we are here to discuss with you. Please take the time to reach out and ask us. We are here to help. You will feel much better and worry much less after these points are put to rest. Thanksgiving is just around the corner. I prefer prime rib and crab legs to turkey, but hey that's just me!

Enjoy the rest of the week and feel free to call us if your personal worrying manifests into something that could cause sleeplessness or an elongated Pandemic Hangover.