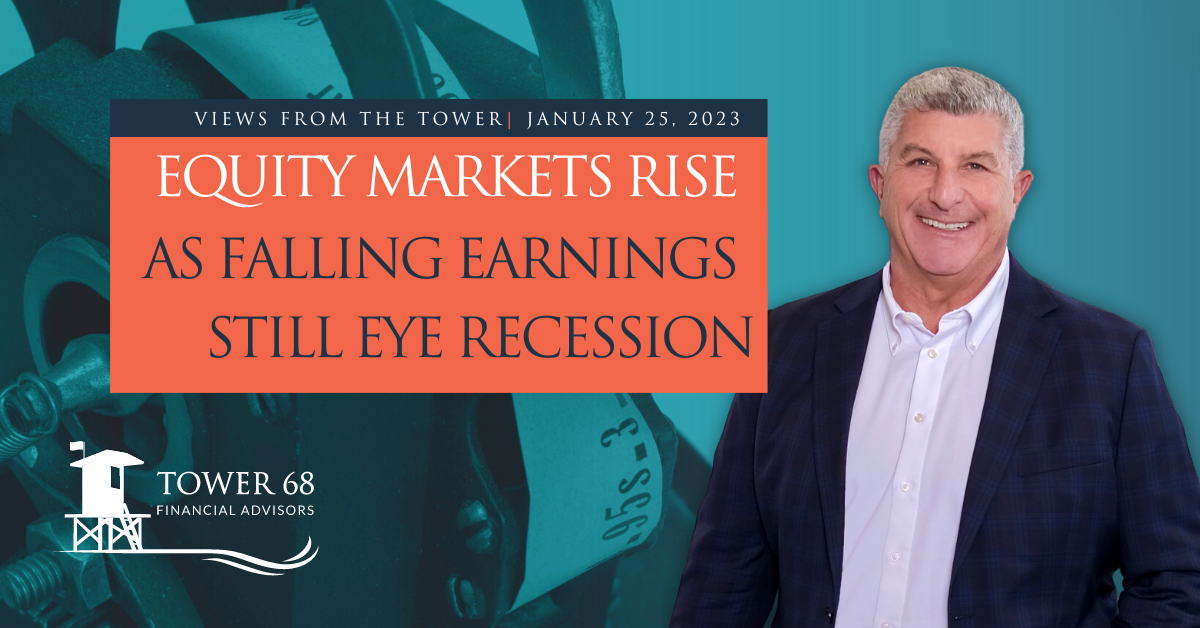 This year has started quite well. In the first week and a half, the equity market was going up in an organized and methodical fashion. Then came last week when the indexes had poked their noses above their respective 200-day moving average lines (after spending a year below this level) only to be broadsided by a decline last week that felt similar to the false starts we experienced in February, June, and October of last year.

This has then been followed up once again at the beginning of this week with the indexes moving back, decisively, over the 200 DMA line once again. 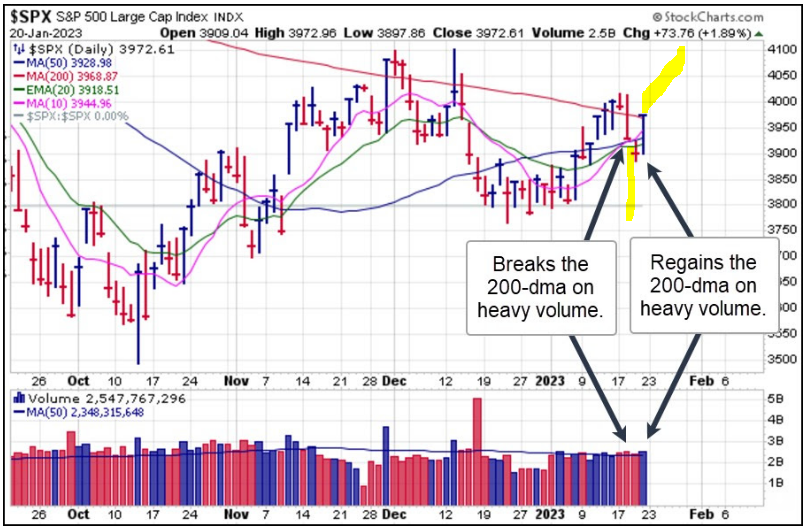 So, the question logically becomes what is going on under the hood of the markets? What has changed this year? How could the equity markets be rising and the news now beating the drum of falling corporate earnings and "the impending recession?" The answer, most simple, but most difficult to understand is that the markets are a discounting mechanism.

What I mean by this is that the current price is reflecting what is expected 9-12 months from now, not what happened in the fourth quarter or what is being bantered about in the news today.

What has been clear and confirmed has been the price of gold (bottomed and turned higher), the decline in the US Dollar (which coincided with the October lowest low in the stock market), and the reversal back down of the yield on the 10-year US Government Treasury yield (which happened at the same time as the turn in gold and the US Dollar).

To validate that there is no correlation between the direction of the economy and the direction of stock prices, please look at the two charts below. The first is a dot plot that validates that earnings declines (which are being called for in 2023) don't necessarily mean stock prices have to fall.

The second chart shows the large declines since the stock market crash in 1987 and how the markets did in the subsequent year. 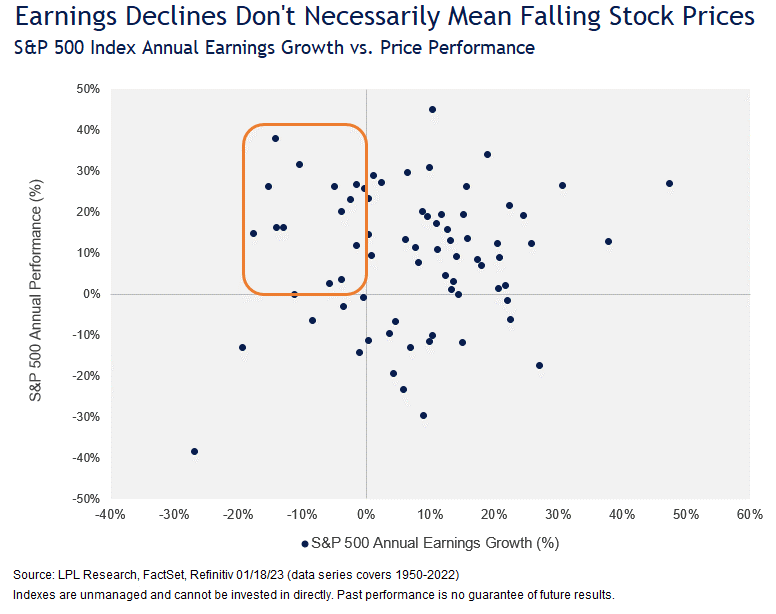 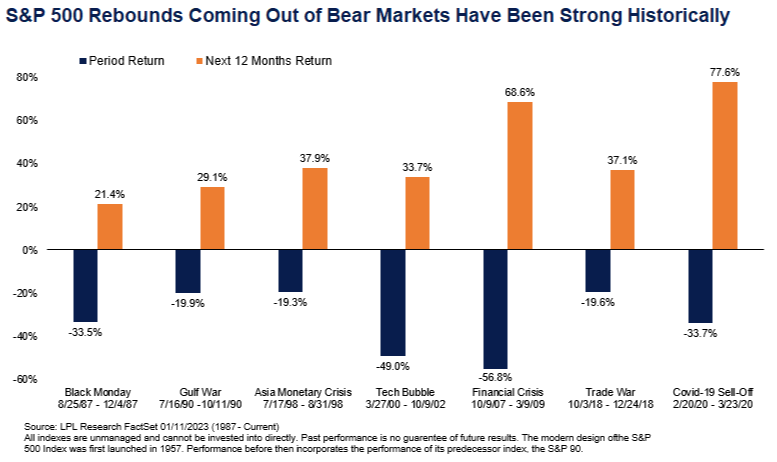 It is worth remembering that the stock market rebounds following bear markets have been powerful historically. The S&P 500 has bounced back an average of more than 20% within 12 months coming out of bear markets as seen above. Looking at these last seven bear markets, we have seen the market bounce back an average of 43.6% after dropping 33.1%. LPL Research expects the S&P 500 to produce double-digit gains in 2023, which seems quite reasonable based on the last seven cases.

As I opened this note with the tug-o-war between last year and this year, it has manifested in a feisty bull-bear debate. So, to give some points that we can sink our teeth into to measure how the economy progresses or declines:

What is important in the chart below is the obvious difference in GDP growth in the Emerging markets. This is where clear relative strength has happened. The emerging markets, as illustrated by the point and figure chart below, are now outperforming the US Equity markets for the first time since 2010!

After 10+ years of underperformance, and much lower valuations, they could have even a better level of bounce from the lows than the US markets. 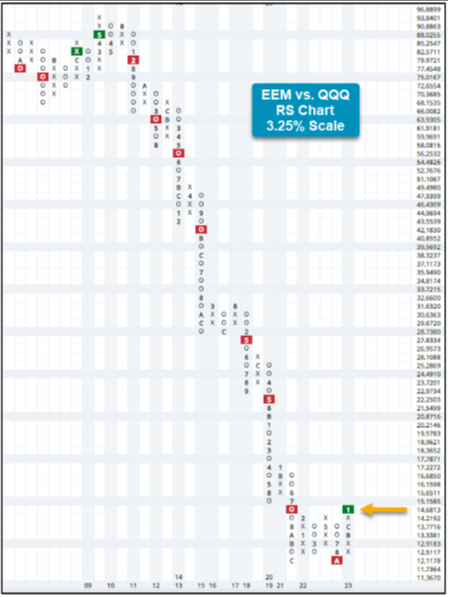 I could go into the same detail on the action of the Fed, corporate earnings, and China's reopening, but suffice it to say that there is an infinite number of conflicting opinions in these three areas as well.

As the S&P 500 earnings for the first three weeks showed 69% of reporting companies beating earnings expectations, so far 2023 appears to be leaning toward the bull case. And don’t worry, you bet we will be diving into deeper detail about the opposing opinions on the Fed, the progression of corporate earnings, and the developments in China in the upcoming newsletters.

At present, the markets seem to be stabilizing a bit and this is a welcome change! Should there be an additional point you would like me to discuss, please don't hesitate to reach out and let me know.