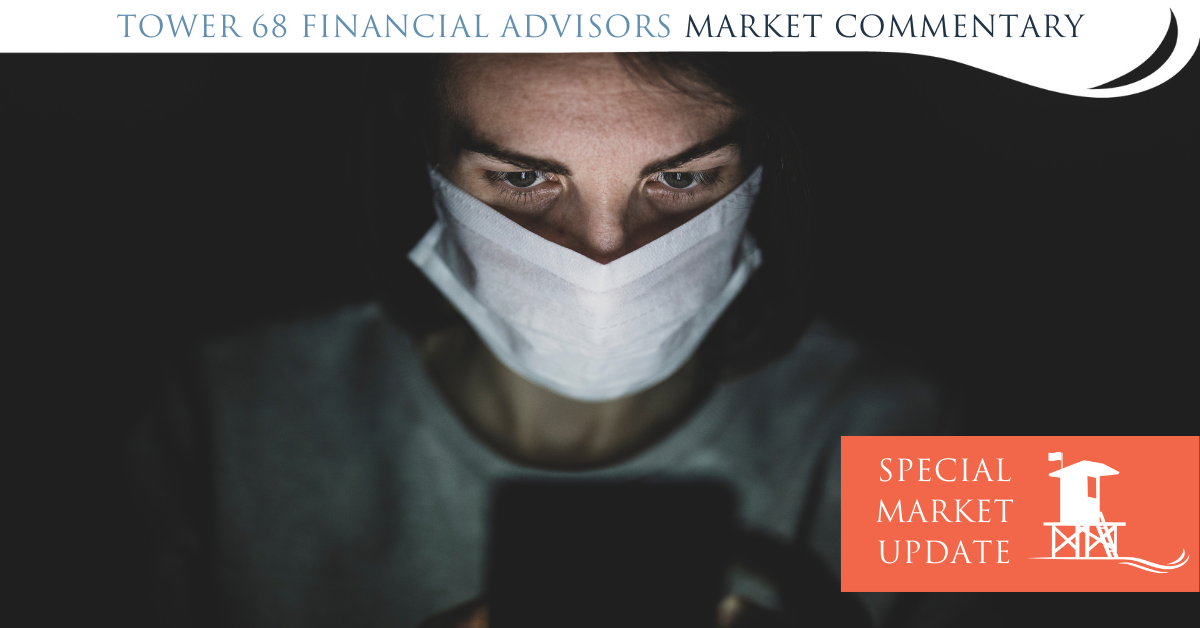 As the heat held strong on the Russian invasion of Ukraine, I have to wonder if Putin and China’s Xi bought index puts against the US stock market to benefit from the decline experienced last week? Most textbooks omit the chapter on what markets have historically done when war is expected to break out. Clearly, this isn’t the first time that there has been a scare of a possible war breaking out, but in almost all cases the action of the markets has been consistent: 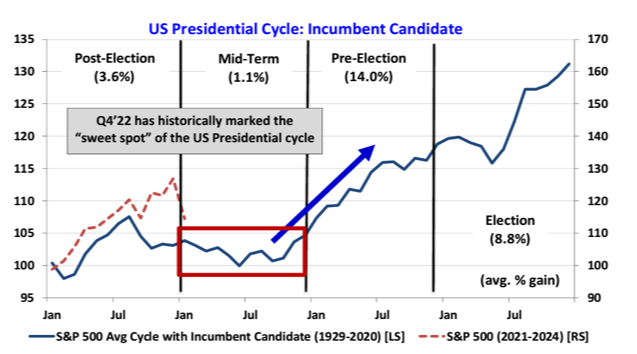 How much worse can it get than a war with Russia over Ukraine? I didn’t want to sell positions that have accumulated large gains over the years and create a big taxable event if this is a digestion and not a full-blown correction. But I will admit, I have been downright cranky! So, what I do is look to see what “is working” and what “isn’t working.”

I’m going to start with what is “normally” the place to go when equities are on the defensive: bonds. If one is to use the I Shares Core US Aggregate Bond ETF (AGG) as an indicator of general bond activity, it is clear that with interest rates on the rise, bonds are not keeping their values stable but rather are in a strong decline. See chart below.

A longer-term view can be seen below if we track the action of rates since 1980 when they topped, to the pandemic low when they began rising.

As can be seen above, the rates hit a global shutdown low in 2020, and have moved back up. The question becomes "how far up they will come?" This is an elusive question that is being bantered about by academics across the globe. The most important issues as I see it are:

So, what do I see as a good opportunity for investors? For this, I go to the chart of Dr. Copper, truly one of the most important industrial metals to be used by industrialized economies across the planet.

If copper is looked at relative to the NASDAQ 100 it sure looks like it is getting ready to come back up to some extent. This could be said for many other commodities as well. Simply think about your own situation at the gas pump, the supermarket, or a local restaurant. Food, energy, and industrial metals are all rising in price at fairly aggressive rates. According to the relative strength work of Dorsey Wright & Associates, the Commodity Index began to show this change in relative strength a little over three weeks ago for the first time since October of 2011!

This same issue can be said about the overall basket of Value stocks vs. Growth Stocks. It has been since October 2006 that Value has been handed the baton from Growth in style measurement.

I’ve touched on a couple of important points but given that we are (hopefully) preparing for a rebound in equity markets in that latter part of this year as evidenced by history in the first chart I presented, I wanted to finish with the most popular question I have been asked of late: What could happen in the upcoming midterm election?

Although we are a long way away from Election Day, it is important to note that a new president has historically lost about 30 House seats in the midterm election. With the Democrats holding a historically small majority in the House currently, a swing this size would of course give the Republicans control. “Yes, history would say the Republicans likely gain control of the House and very well could gain the Senate as well,” explained LPL Financial Chief Market Strategist, Ryan Detrick. 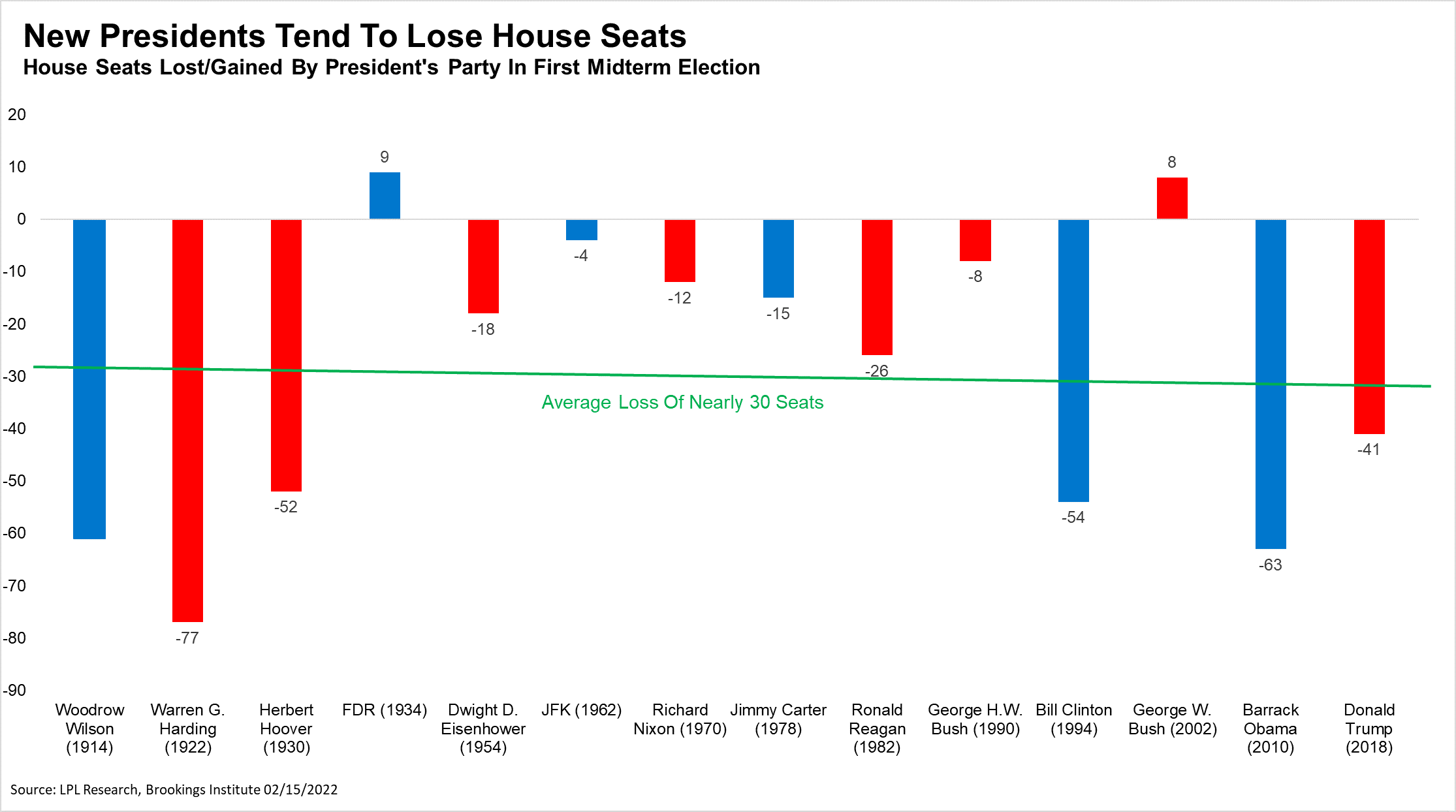 The ultimate question is: How does this play out for your investments?

We do expect Republicans to take the house right now, resulting in something close to a gridlocked Congress. What happens if Republicans take both the House and Senate? “The good news is one of the best scenarios for stocks is a Democratic President and Republican-controlled Congress. In fact, the late 1990s saw that same scenario and it was one of the best times for investors ever,” Detrick added.

The “teaser” to this change over occurred this past week in San Francisco’s School Board Election. Three members were recalled by a margin of more than 70%. Voters were upset that the school board spent time trying to rename some schools, rather than focusing on reopening all the schools. San Francisco is and will likely remain one of the country’s most left-leaning cities. Still, it will serve as a reminder that even left-leaning voters can put up with only so much. Republicans also passed a bill, with partial Democratic support, that children cannot be forced to wear masks in public schools.

Whatever your view on masks in the schools, this new law is a sign that there is a change in the mood toward current leadership particularly when it comes to the treatment of our children and the importance of education.

If you are concerned about how the current political climate may affect your investments, please don't hesitate to contact our office and speak to someone on our team. We are always happy to address your worries and discuss strategies for weathering uncertain conditions.