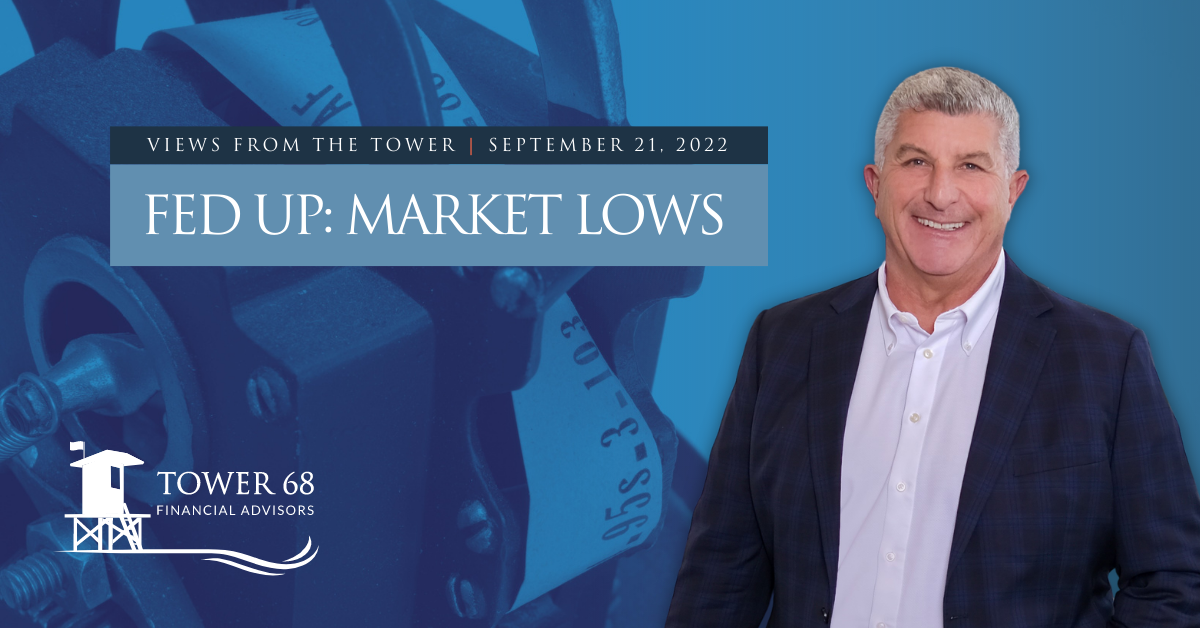 At present we are clearly in a battle. On one hand, we have the Federal Reserve trying to rein in inflation by raising interest rates and on the other side, we have the economy as measured by the GDP and the stock market. The Fed keeps raising rates, and the GDP has turned negative as has the stock market. It shouldn't come as a surprise to anyone that eventually all the money that was thrown at our economy since the Great Financial Crisis of 08-09 and then again during Covid would eventually need to be reckoned with. It just has never happened in a way that it is mired in a media-induced quagmire of which has never been seen. I've sided with the belief that the lows of the markets were in during mid-June and that building a base off that low would be the next phase in the market's progression.

In looking at the markets, there is a study that is often quoted that seems to be an important one, particularly now, which is the "Advance /Decline Line." Line measures the number of issues that are going up vs. the number of issues that are going down. What we are noticing is that even though the price of the S & P 500 index seems to be quite weak, the lows in the Advance/Decline Line are becoming higher. This is a normally important distinction that tends to preclude a market recovery.

History is often used as a guide when it comes to the markets. While this is not always the case, it is the trend we have observed from a historical perspective. Much of our decision-making begins from past experiences or knowledge derived from history. Just as we look at historical price movements as part of our decision-making process, the Federal Reserve does the same with economic data when it comes to monetary policy. Their main data series back to is the often-mentioned 1970's period when Year over Year inflation peaked at 14.59% in 1980. This helps put into context many comments coming from Fed speakers when they mention the rates will need to stay higher for longer even after inflation begins to slow down. Since we are now starting to see some signs that prices have peaked in many areas- such as used cars, gasoline, and housing, it would be only logical to see what the markets have done following these turns: 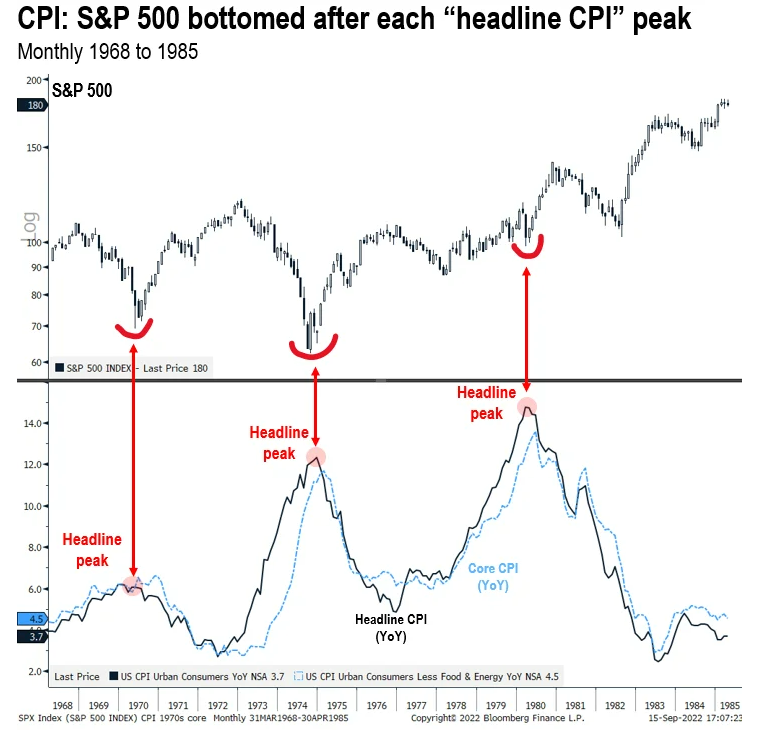 In each case, following a peak in CPI, since the late 1960's, the S&P 500 bottomed! That is good historical precedent! One other historical precedent that we are paying attention to is the action of the markets during the mid-term year of a presidential cycle. Going back to 1990 there has been quite a lot of consistency in the action of the markets. In most cases, the markets tend to be weakest in Mid-September to Mid-October. At that point the market tends to really rip to the upside. I have put the following chart in many of my notes in the past, but since we are even closer to this hopeful turning point, I am including it here, plus some annotations of what is in front of us this year beginning with today's Fed meeting (9/21), the next CPI report (10/13), the next FOMC meeting (11/2), October's CPI (11/10) and so forth below: 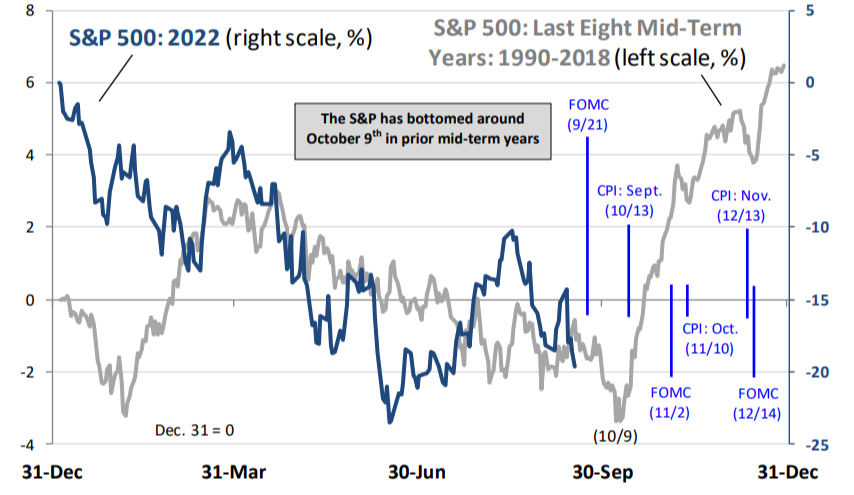 The last piece of interesting circumstance that I wanted to bring up is the phenomenon that occurred last Tuesday when the equity markets were down 1,300 points in the DOW. On this day, literally 0 companies on the NASDAQ advanced. Not one company was up in price! Even though this seems like quite an extreme, it has actually occurred 13 times since 1996. I would consider this a type of capitulation that tends to happen at the end of a move lower. In these 13 times of "zero-bid" on the NASDAQ, 13 of 13 times, the NASDAQ 100 was higher 12 months later, with an average gain of 21%. What was more shocking was that when the NASDAQ had experienced a 25% drawdown from its highs (which it has since November of last year), the median gain was +64%!!! I'm not saying that this is going to happen this time, but I am saying that the markets have been on the defensive for some time now and a sizable bounce would be a normal expectation. Below I have included both a picture of the NASDAQ 100 going back to 1996 and following this picture the chart of the rates of return following these "zero-bid" days. 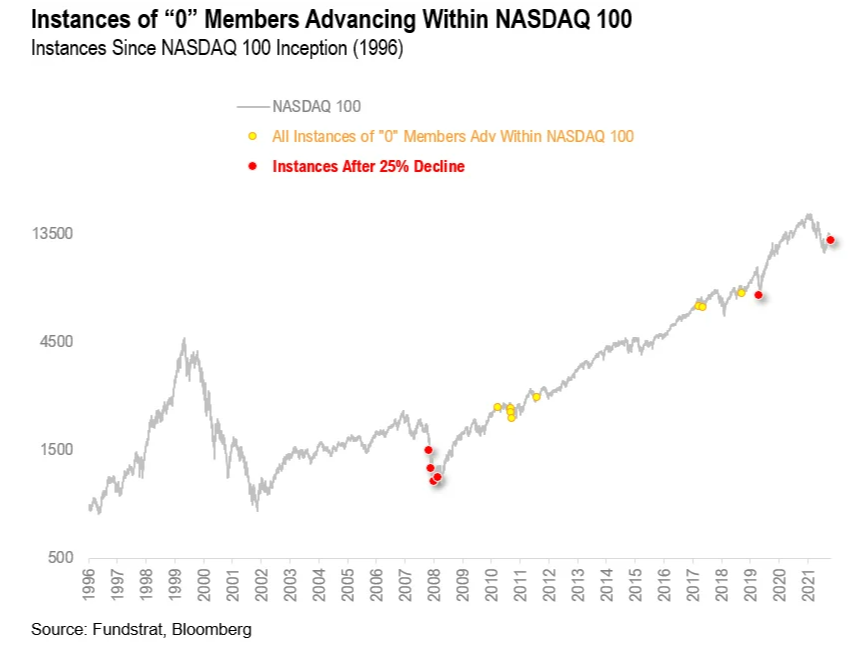 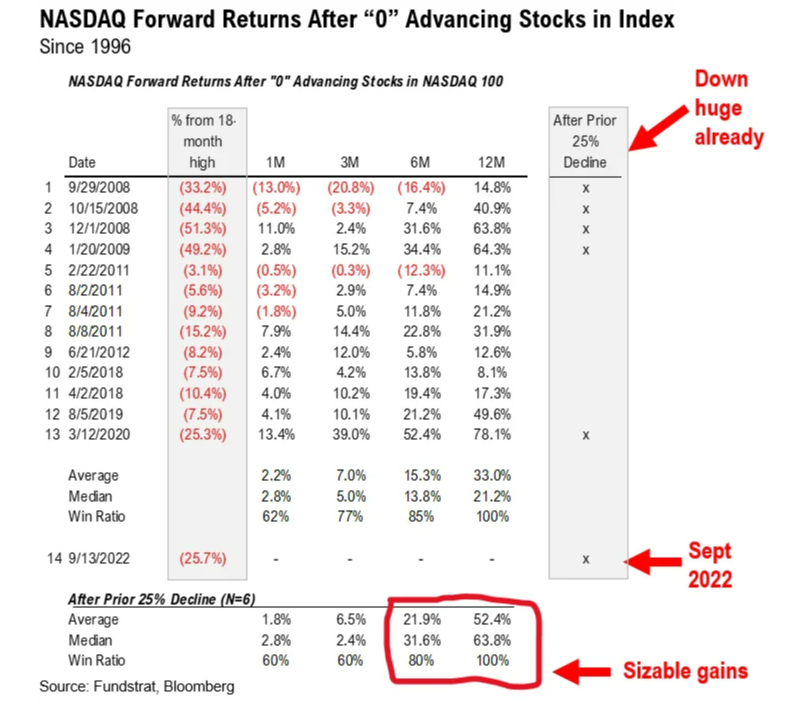 In closing, it should be remembered that the Fed has an impact on the demand side as higher interest rates restrict capital flows, but the negative effect is a possible recession along with negative business growth rates. Just last week the biggest package delivery company decreased their earnings expectations by a shocking amount, followed by one of our biggest industrial companies in the US. This week Monday after the close one of the biggest US automakers made a negative preannouncement as well. With GDP being negative the first two quarters of the year and the interest expense on the US debt being dramatically higher now than it was last year, the negative trade-off to lowering inflation by raising interest rates is being felt. The good thing is that historically the markets have recovered and eventually moved to higher highs. I do believe that this has been a cyclical correction/digestion in a longer-term secular bull market, and if history is any precedent a number of dominos are falling into place to signal a market recovery that could be developing. Only time will tell. The contentious nature of our domestic political friction along with China's economic slowdown and the Russia/Ukraine conflict all seem to be too large to deal with at times, but as evidenced by the strength of the US Dollar and the weakness in gold, it is appearing that there are many that believe we will recover as we normally do.