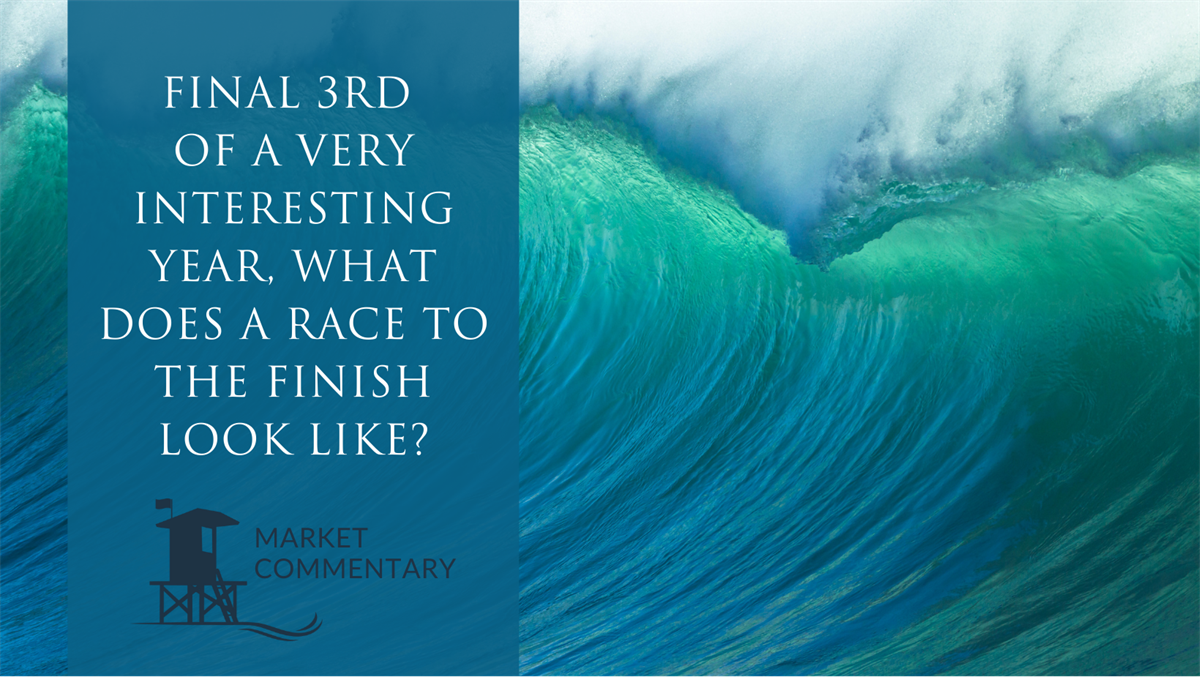 Final 3rd of a Very Interesting Year, What Does a Race to the Finish Look Like?

For the last two weeks, every time it looked like the stock market might correct a bit deeper it (once again) just came right back. As it stands, the only real hook to hang a hat on for the widely expected September swoon is the seasonality of the month of September, which has a history of being less than friendly. And more importantly, it isn’t as though we haven’t had some good meaty catalysts to act as the canary in the coal mine for a market pullback. The most recent of which, as I write this, is the massive default in the Chinese developer, Evergrande Group, which saw the trading halt on their $600,000,000 (yes that number is $600 billion) in debt on Labor Day. We will certainly see if there is a spill over into US Equity and Bond market this week.

So, the point of this week’s note is really more about what to pay attention to so that a runway or a decline for investments is expected for the last third of 2021. Clearly it has been a strange year, following an even stranger one in 2020. Before I go into detail on what I have been paying attention to, let’s look at the grass roots of things:

So, what does the market have on its plate now? Aside from the points I’ve discussed over the last few weeks; Powell, China, Delta Variant, all of these have either had very limited traction in terms of concern or dissipated very quickly on the market side. In speaking with a high-level person at a major defense company, the Delta variant is supposed to fall off quickly some time the end of this week. All of this seems to suggest that we just do not have the classic setup to even provide a material correction let alone a full-blown pullback. This is what is on my list:

What is the tradeoff to the continued advance of the markets?

As I stated above, the backdrop for most everything is the economy and earnings. We are seeing a fairly stable economy and rising earnings, but I have to ask myself, what if the economy just sort of fizzles out here? What if, like the labor number of Friday, this is a precursor of a slower economy? The boo-birds this weekend in the press were intimating that the Fed has no more bullets, that the Fed can’t really do anything else. Well, I want to squash that one real quick. The Fed owns the printing press and the rule book. They can do what they feel is right to provide additional oxygen to the living, breathing economy in a variety of ways. My concerns are that we are continuing to see oil prices and soft commodity prices continuing to go up. I am referring to the price at the pump and the prices at restaurants and supermarkets. Both continue to go higher. Gas prices are a bad one, they are an implied tax increase to the consumer, yet higher gas prices seem to relate to the summer driving season, which is officially over, but the increase in food prices seem to be here to stay.

In looking at industrial commodity concerns, some prices are stable and don’t appear to be intimating a concern for a declining dollar, some prices seem to be hitting a ceiling, and still others have experienced a pullback of late, but seems to be in challenged supply. All of these make me feel that the underbelly of the industrial economy is intact, and demand isn’t trailing off. According to last week’s ISM number, it is appearing that many companies are refusing to be put in a place where they can’t make anything because they don’t have enough raw materials; we are actually hearing some stories of stockpiling. So, I looked a little deeper and I saw that production and new orders are rising more than estimated and prices paid seemed to trail off some (source: Bloomberg).

In closing, the Delta Variant seems to have reached its nadir, interest rates are staying in check, economic indicators are not telegraphing inflation, and companies are believing in themselves so much that I continue to see massive increases in companies buying back more and more of their own stock. The flip side is dreaded September. OK, maybe we get a shock wave. Maybe this massive default in China makes some pull in their horns. But I ask myself, aside from short-term pullbacks in the range of ±5%, is there really a lot out there getting in the way of higher prices? And last, with all the money on the sidelines, this money is hungry and looking for a chance. If there is a 5-10% pullback, this could be the September opportunity being bantered about, but a few months from now it would seem to look like just another blip on the radar screen.

We all have different thresholds of financial pain. If you are concerned about yours, please let us know. So far so good. It was a beautiful Labor Day weekend and we are now into my favorite part of the fall season, when the weather is gone and the beaches at Tower 68 are still nice and warm.

Have a great week!