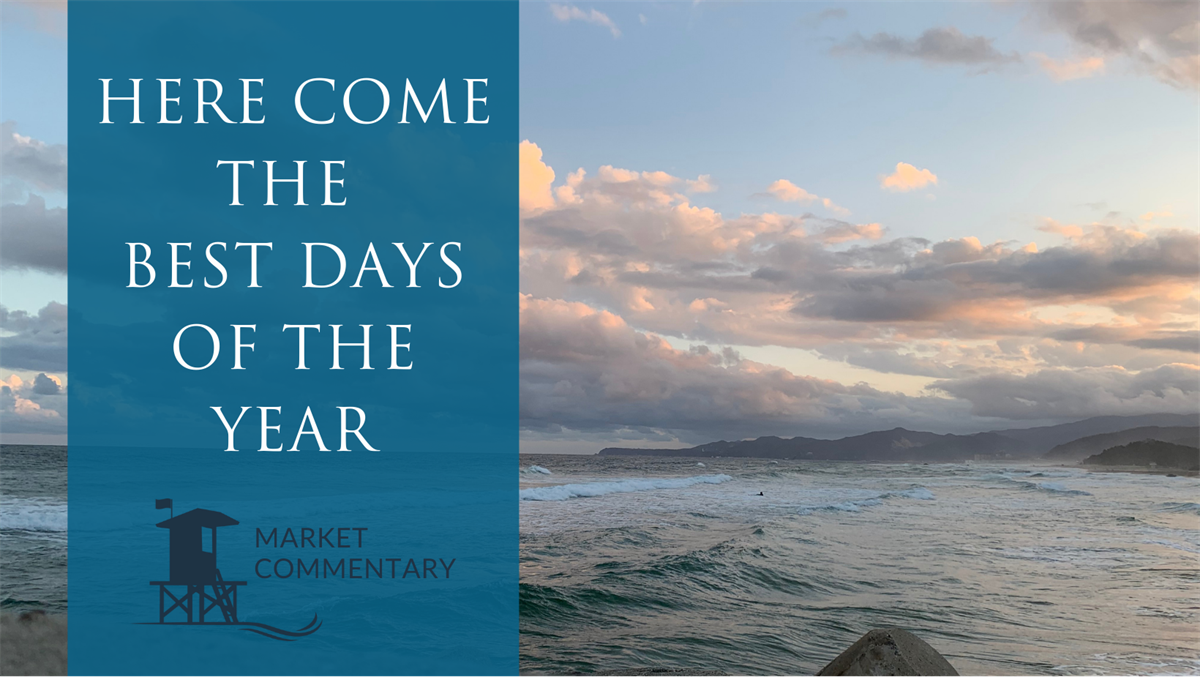 Here Come the Best Days of the Year

Brother wind, rain, a broken supply chain, rising inflation, slowing GDP, flattening bond yield curve, Cushing oil supply hitting critical point, slowing incomes (due to ending of Government subsidies), flagging sentiment, nor earnings misses from big NASDAQ names can slow the market and its notorious seasonal advance. The market was ready to test, took less than two days off (last week), then it was right back on it Thursday and Friday, pushing key indices to new highs. Thus far, the seasonal rally is doing what seasonal rallies do, moving steadily higher after the September into October seasonal selling. In boiling it down a bit more than referring to the broad US equity market, the breakout potential for the Russell 2000 (small company index) equates to the firepower we see for the markets broadly because the S&P 500 has been positive 92% of all rolling 3-month periods when the Russell 2000 is up. On a relative basis, we think it would be reasonable for small-caps to take on a leadership role given their higher sensitivity to economic changes. Also, it appears that we might be seeing this as a near-term market direction call around a long-term relative trend that still favors the large companies as well. 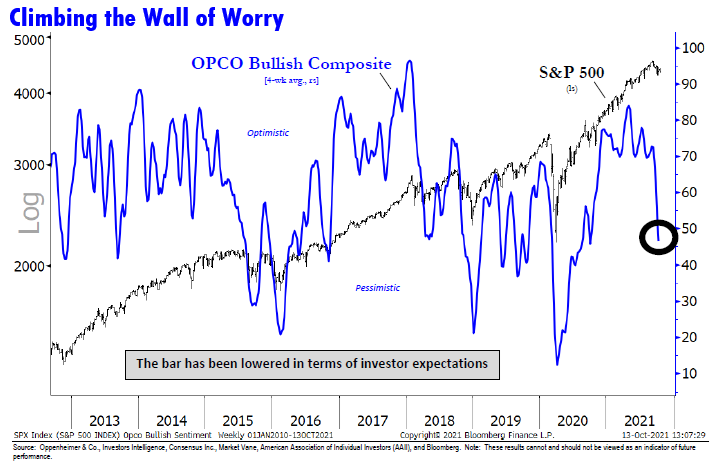 I often reference in my letters the need to pay attention to the big-dogs of markets. This is a perfect time to do so. What I am referring to is the US Dollar vs. foreign currencies and bonds in general. As far as the US Dollar is concerned, it should be noticed that the US Dollar index (UUP) vs. the Euro Index (FXE) is continuing to show US Dollar relative strength. This tends to mean that large asset pools are focused on the continued recovery of the US economy—more so than the foreign economies that tend to depend upon US consumption—which is really strong right now. As for bonds/interest rates, it should be noticed that the difference between short-term rates and long-term rates is becoming less and less. This is because the economy is growing, but not at the inflationary rate that many have feared. Also, it should be noted that the bellwether 10-year US Government Treasury yield has begun to decline from its temporary highs. This also could be construed as an indication that the dreaded inflation scare has maybe run its course. A further indication is the 3rd Quarter GDP numbers that came out last week. The street was looking for an increase of 2.6% and it came in 30% less at only 2%. This is clearly not an indication of runaway and inflationary expansion.

In the weekend Wall Street Journal, the Intelligent Investor section spoke even further on inflation. In the article titled, "An Investor's Guide to Deflating Inflation Fears," it was stated, 'Analysts, economists, and other forecasters are no better at predicting inflation than at predicting anything else: They stink at it. As then-chairman of the Federal Reserve Alan Greenspan noted in 1999, estimates of future inflation—including those by the Fed itself—have been generally off! And even changes in inflation that were doggedly forecast never occurred. The fallibility of forecasts is one reason to think twice about overhauling your portfolio. The other is that assets often peddled as inflation panaceas don't have magical powers. Gold, for instance, has sometimes failed to keep up with the rise in the cost of living for decades on end (it's down almost 5% this year even as inflation worries have spread).' Today, however, several tech giants are priced at roughly the same multiples of their current earnings as the S&P 500 overall simply due to the fact that earnings are still growing at a ferocious rate.

This week's FOMC (Federal Open Market Committee) meeting could be quite telling about how aggressive or non-aggressive the Fed intends upon being with the whole Tapering and Tightening conundrum. There will certainly be continued bantering about the need or lack thereof for tightening. Personally, I feel that at 2% GDP growth rate for the 3rd quarter, growth seems to be in check, even though there seem to be quite recognizable price increases for food and other discretionary items. At present, the committee is evenly split between those that think rates should be increased in late 2022 or early 2023. The economic indicators going forward should help narrow or eliminate this rate rising target. Due to our economy and those of other developed nations still being quite fragile, the Fed is more than likely to be a little bit more patient in raising rates than markets could be expecting. The raising of rates clearly won't help the supply chain, won't help consumption, and with the increase we are experiencing in oil, clearly wouldn't help the consumer in general.

The calendar is about to do a lot of favors for the bulls, as late October and early November historically are quite strong. October 28th was the best day of the year until it fell more than 3% last year, but this day is still one of the strongest days historically for stocks. Not to be outdone though, October 29th and November 2nd and 3rd are also some of the better days of the year. "I'd like to think it has something to do with my birthday being on October 28th, but the truth is bull should be aware that the coming days are historically some of the best of the year," according to LPL Financial Chief Strategist, Ryan Detrick.

Besides the strength that we are experiencing here in the US equity markets, Ari Wald, my favorite technician stated, "In our latest European Inflection Points, we argued that Europe's trend is the strongest it's been in years—the potential for internal breadth to re-broaden both in the US and globally is a key point in our bullish outlook. Aside from the benefits of global diversity, we think US investors should maintain an Overweight position domestically because the S&P 500 continues to show relative strength. Specifically, the S&P 500 has rallied through September resistance with a coinciding turn vs. the All-Country World Index (ex. US)."

And as I said at the very beginning of this note, if the Russell 2000 breaks to the upside (and Monday of this week it truly showed that this could be in the offing), the potential breakout in the market's "soldiers" equates to the firepower we see for equities broadly—the S&P has been positive in 92% of all rolling 3-month periods when the Russell is up. Boom! Mic drop!!!! 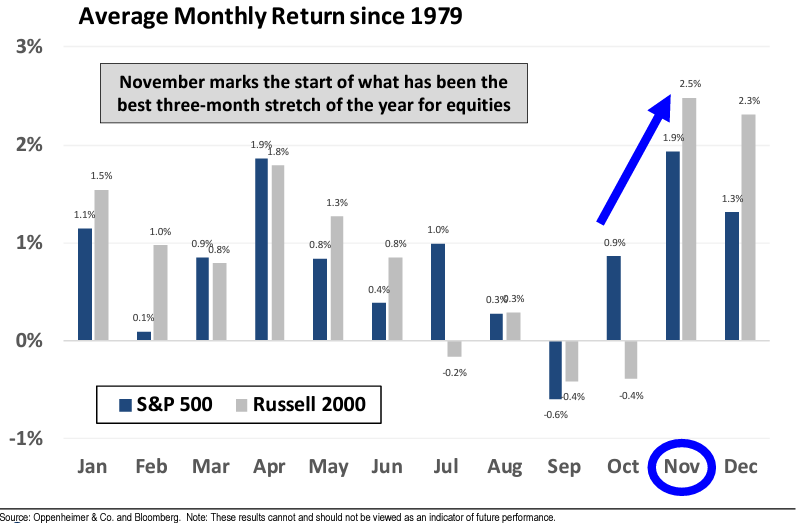 In closing, I want to call upon the comments of the market agnostic analyst, Bob Brinker, in his November issue of The Marketimer. Bob makes mention of us coming out the back end of the September pullback and the 'health-restoring" nature of this small digestion. Usually, stocks move out of weak investors' hands and into stronger hands with the tolerance to understand that even though the news on the virus, inflation, and the supply chain are still not good, they are not getting worse, and are beginning to deal with what occurs when they end. He says, "We expect the stock market to demonstrate an upward bias into the winter season as investors look forward to the prospect of continued earnings progress in 2022. The absence of pre-recession evidence remains the key element in our market outlook. Based on our forecast of real GDP growth in 2022 in a range of 3-4%, along with continued progress against the pandemic, we are increasing our 2022 earnings estimate."

He went on to finish with comments about the supposed tax increases. He states that the "tag-team" effort of West Virginia Senator Manchin and Sinema from Arizona to block corporate tax rates is in place and tax rates are expected to remain at the level they are. This also could be very good at ending the trepidation of large investors to take advantage of the health increasing in the US equity markets. Only time will tell, but with Europe improving by virtue of our consumption, earnings coming in better than expected and forecasts following suit, and interest rates staying in check, this could be the beginning of a nice finish to 2021. 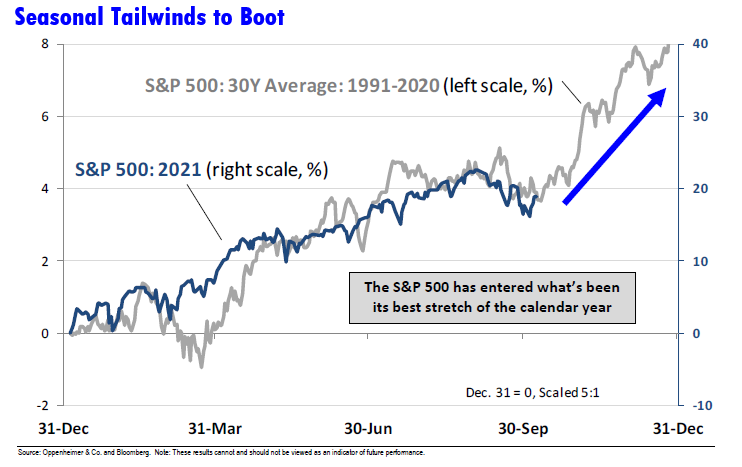