I know it may sound strange, but I really think that the markets needed a day like Friday. Was it painful? Was it a shock? Was it based on a new variant? I think it was something totally different altogether. I believe we had a confluence of events that gave the markets reason for pause:

To me, a wonderful confluence of items that need a knife and fork to cut into.

So where are we now? Well, the 1949-1966 secular bull market gained over 500%. In fact, most of the secular bull markets in history have had similar large gains, so this one that we are experiencing is not anything out of the ordinary.  Does that mean we won't get pullbacks? Of course not! In fact, we have been overdue for some kind of a digestion. But it will most likely be one to be met with buying, not additional selling. As I like to say, a perfect time to water your flowers (buy more of what is doing good) and pick your weeds (sell what is underperforming). In the picture below, please see the vertical green lines. These proved to be good times to do this. The green line furthest to the right could be another good time. The excessive volume at the bottom of the picture could also support this idea. Yet, if it is not, things could get worse. 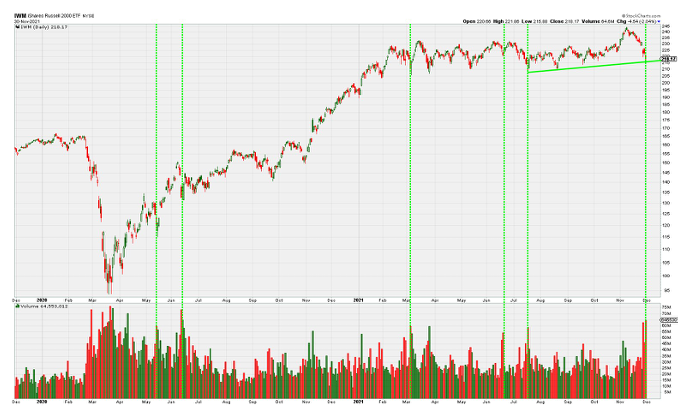 I see the equity markets as something that is bent but not broken. The things that are getting my attention are as follows:

So basically, we have moved from a market that was constructive for quite a period to destructive in a short number of days. Was COVID the curveball that threw the markets for a loop? I really don't think so. The market had begun to act tired around mid-November, and you had a trading day on Friday that was an abbreviated trading day coupled with the announcement of a new strain of the Virus. Clearly not a good combination for the bulls. Could this have been a politically-driven event that was shocking enough to support the supposed need for added stimulus—the stimulus that the Democratic majority is trying to push through? Only time will tell. From many of the takes I've read, it would seem that some believe it is March 2020 all over again. In an expectation of history playing out the same way, some were pitching the "COVID Collapse" playbook of stay-at-home stocks and safe havens (even though the Work-From-Home ETF was down on Friday too). I guess another significant drop is possible, but I just don't see it. Perhaps living on the beach has skewed my perceptions but the only way I think we see a repeat of another March 2020 is if we get widespread lockdowns in the US and the President came right on out on Monday and said emphatically that this was not going to happen. So, at the moment, I am actually looking for some sort of bottom in here, either one that's already here or if we get a few more flushing types days should prepare the markets for Santa Claus to come to town.

In the end, the markets (longer-term) are led by the direction of the economy. The most immediate indicators referenced above say the economy is still healthy and continuing to get healthier. On the other hand, I've listed the issues that we are seeing that really seem to bother me, as they are saying quite the opposite. We will probably get an answer fairly quickly, as there is really not a lot of new news after third-quarter earnings are over, and the end of the year is not far off. I normally have a lot more to say, but this time there really isn't much that I can find that I feel is worthy of inclusion. Please don't let this short-term market digestion deplete your ability or desire to go out and shop for loved ones for Christmas. Being a grinch is never a good thing. Stick to the ugly Christmas sweater and call it a day.