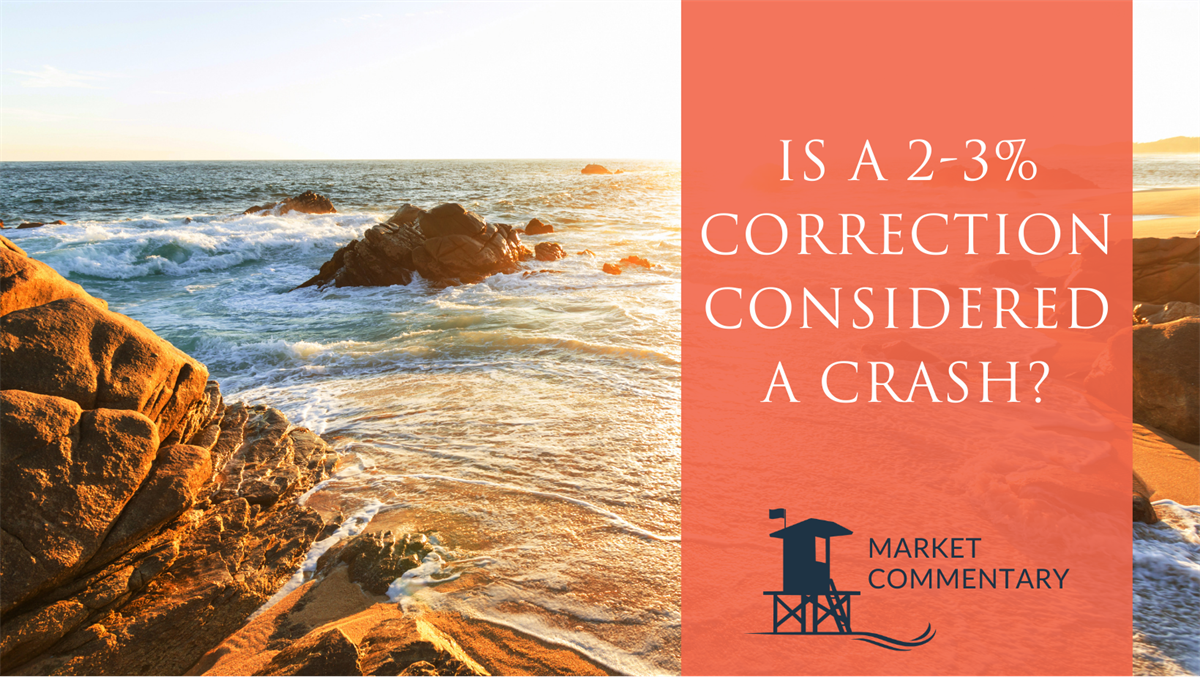 Is a 2-3% Correction Considered a Crash?

Valuation is a perfect example of something that investors are told matters a great deal, but I have not seen any real evidence to support that in practice. Those who disagree with me will try to tell me otherwise, but you have to understand that people have been telling me the market is "overvalued" and can't possibly keep going up for several years now. I've also watched "overvalued" companies outperform "undervalued" companies for some time now. I could not tell you the P/E ratio (general measure of price per share as compared to earnings per share as a thumbnail method to compare one company to another) of one stock right now with any degree of confidence, and don't even pay attention to the S&P 500's P/E to a really great extent, given that the S&P 500 seem to be being dragged up and down based on the big-tech five, and their valuations almost always seem to be in question. In quoting one of the sages of the markets that I follow, Jeffrey Saut, he said very succinctly, "the market does not care about the absolutes of 'good' or 'bad' but only if things are expected to get 'better' or 'worse'." I think this really applies to both individual stocks and the markets in general. If the market collectively decides that price in the future will be higher than today, they will buy no matter what the "valuation" is. How else is one to explain the kind of ascents that have been seen in stocks since March of 2020 in companies that are growing but still show no earnings—or even Bitcoin, for that matter?!

This is why my strategy is to love what is getting in the way of where the world is going. At times, these industries and companies dramatically outperform and sometimes not, but in the end, if this is what the markets feel is where the world is going, they tend to outperform consistently over time. My strategy assumes that the markets can do anything, and often in the short-term I appear wrong. The S&P 500 is currently above every single year-end target made by 16 well-known strategists back in December of last year according to an article I found from MarketWatch. The median target was 4,027 and the most positive was 4,400 forecasts. The lowest was 3,800, which was made by three big name firms. Obviously, there is still time for any of these targets to be proven correct, but does that really matter when all of them have already been somewhat incorrect so far? I'm just not seeing a lot that screams out imminent danger or suggests that this recent pause that we are in the middle of is anything more than a pause that refreshes. I still believe if the market was going to "crash," the time to do it was earlier this year when bullish sentiment was at historic extremes, speculative assets had gone parabolic, and it felt like stocks would never go down again. A significant crash now, after many of those speculative stocks have imploded and the broad market has gone nowhere for 6-7 months to hit washed out breadth readings currently, seems somewhat unlikely. It is appearing that the likeliest path from here in the short term is for the stock market to try to keep vacillating in a fairly tight range and for dips in quality companies (that are in front of where the world is going) to be taken advantage of. The smaller and mid-sized companies have spent the last 6-8 months in a very tight sideways pattern, not breaking higher and not rolling over. If they should join their larger brethren, the overall market would show improved breadth and the major indexes could improve.

I have spent probably an inordinate amount of time talking about what I am seeing in the markets and what appears to be happening under the hood in the area of the major indexes, but I wanted to take some time and talk about what else is going on and where else the money could possibly be going. One of the most important is clearly the US Dollar. The US Dollar is a reflection of not only foreign expectations of US economic strength relative to their own, but also an important component in our trade balance. If the dollar gets weaker, our US Dollar buys less of the imports, and foreign currencies (which are stronger) can buy more of our goods and services; hence benefiting our trade and exports and causing strength to our economy. The converse should be true as well. If one has ignored the US Dollar over the past year, not much has been missed. On a longer-term chart it basically looks like a sideways move, but I can make out some possible rounded bottoms that, when combined, could end up forming one large bottom. If that's the case, there's a good chance the recent low holds since there once again seems to be support around the current level where a low was hit around the start of August. Interest rates have been rising a bit recently, and with so many expecting killer inflation and the dollar to crash, it would only make sense to see a surprise move to the upside. If that occurs, it could take a further dent out of commodities priced in dollars.

I have cooled a bit on the whole "inflation trade" and a lot of that has to do with the fact that the market seems to have cooled on the theme just as everyone and their mothers were talking about it a few months ago. At the time, people were making jokes about lumber prices, and it seems everywhere I looked I was seeing signs supporting higher inflation. Since then, however, the market's expectations at least have come down, with 5-year forward inflation expectations mostly falling since around May 11th, when it peaked almost right where it peaked back in early 2018. The 10-year seems to be doing much of the same thing, all while most commodities have stopped making new highs and some have even crashed. This can obviously change, but at the moment, based on the balance of evidence, I'm seeing better opportunities elsewhere than the "inflation theme."

Aside from the markets having gone up since the last shaking of the leaves on the tree last October, the only real thing that seems to be there to hang one's negative hat on is the strong seasonal tendencies for the markets this month and next. Even the terrible memory of the September 11th terrorist attacks did little to shake share prices to a great extent. In retrospect, the staggering monetary cost of the war on terror since then in Iraq and Afghanistan has cost the US countless lives and $2 trillion. This is a monstrous amount of money that added nothing to our domestic economy, and the fight we are seeing in the political arena about the $3.5 trillion infrastructure bill seems to have a large portion allocated to more foreign endeavors, clearly not something popular amongst the US populace. This past Tuesday, Lisa Shalett, chief investment officer at Morgan Stanley Wealth Management, predicted a 10%-15% slide for the S&P 500 before year's end, but she says that doesn't make her bearish. She points out that the most 12-month stretches contain a big pullback for the index, but that we haven't had one since March 2020. Tech giants, she has noticed, have lately traded hand-in-hand with Treasuries, suggesting that investors have come to view them as havens. "Owning the index today in a global context is a relatively defensive position, and we believe that it's time to play offense," she says. In Shallet's view, interest rates will rise as global economies rebound, putting pressure on stock valuations. She predicts upside earnings surprises and stock outperformance as well.

In the end, it appeared everyone knew that economic growth was going to slow from the second quarter. But it wasn't supposed to happen so soon or so quickly. The COVID-19 Delta variant is the obvious and convenient explanation, but it's an incomplete one. Over the past week, economists across Wall Street have shredded third-quarter GDP. To name a few: Goldman Sachs cut its forecast to 3.5% from 5.25%, Oxford Economics revised its call to 2.7% from 6.5%, and Morgan Stanley lowered its estimate to 2.9% from 6.55%. That's as the Atlanta Fed's GDP Now Model predicts 3.7% for the quarter down from 5.3% at the start of the month. To ascribe the growth cliff to Delta, however, is to assume the weakness is temporary. To the contrary, there are plenty of reasons that investors should question whether anything is transitory anymore and is instead reflective of a new economy that won't be post-COVID for the foreseeable future. This all brings me back to my first point: the markets' prices don't often reflect the here and now, but rather the expectations out in front. The dollar is saying the same thing as interest rates. How is an investor to win? GET IN FRONT OF WHERE THE WORLD IS GOING! At this point, it is industrials, essentials, food, and (most importantly) productivity enhancing and cost mitigation technology. But no matter the case, we may be in for a little more rocky market movement, but instead of looking at it negatively, maybe it could present you with some opportunity!