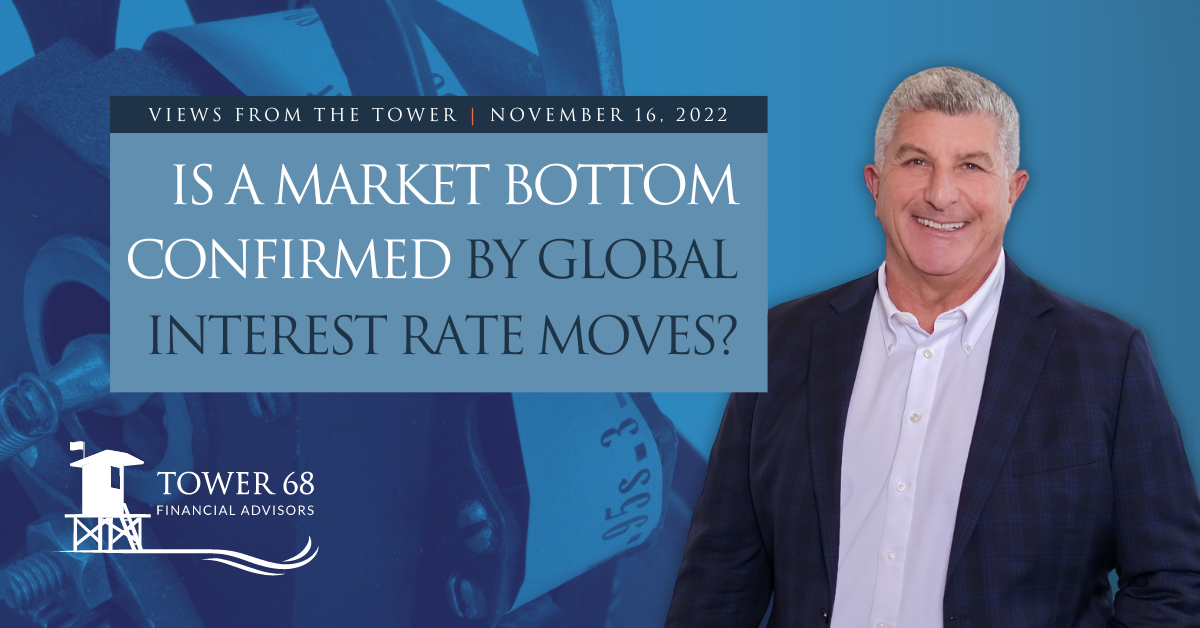 Is A Market Bottom Confirmed By Global Interest Rate Moves?

We knew that last week would be quite a week with the Election on Wednesday and CPI released on Thursday. Not to be outdone, we also had the crypto disaster of FTX going on at the same time. At the end of the week, we had a massive decline on Wednesday, which made the major indexes look like they were going to continue the bearish decline and continue to move lower.

Just when this was the expectation, the markets rallied on Thursday and Friday, ending the week with two 90% up days. As I see it, we have several things to be paying attention to as we get closer to the holiday period of Thanksgiving, Christmas, and New Year’s. So, what are the major facts that we are dealing with right now?

Moreover, on Friday Goldman Sachs reported that they estimated Thursday’s buying was 8.6 to 1 short covering versus long-only buying. What this means is that the up moves in many stocks and indexes were from the people that were invested on the downside and were closing their downside positions rather than the up moves being from outright buying for future upside price expectations. I don’t know how they measure that, but if true it suggests that the huge move was more down to shorts panicking than real buyers stepping in.

Of course, the short covering can kick off a bigger move, but we now need to see evidence that buyers are tempted enough to make it more than a fleeting phenomenon. So, while last week may have been the start of something bigger, I don’t think we can assume it to be the case without more supporting evidence. The best sign I can see is that of the breadth measures. Upside buying volume far exceeded downside selling volume. See below: 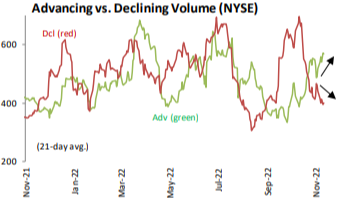 Yes, there is a chance that the market has bottomed and last week represented the start of something greater. I continue to look for evidence in support of that possibility. But for now, the trend does remain down. As I wrote last week, even before the big jump Thursday occurred, there was upside space above 3911 in the S&P 500 up toward 4075-4125 with very little in the way of overhead price resistance. So, there is potential for this to run further even while remaining within the general downtrend that has made for such a tough year. I give the two statistical charts that I have included in my writings in the past couple of months to show the high statistical probability that this is quite possibly the beginning of something that could have some legs. Again, I think if last week did represent a major turning point, it makes sense that stocks should now remain above the levels they were trading at before the CPI news hit. 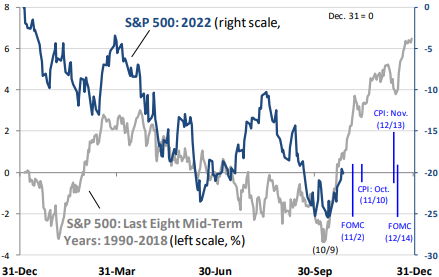 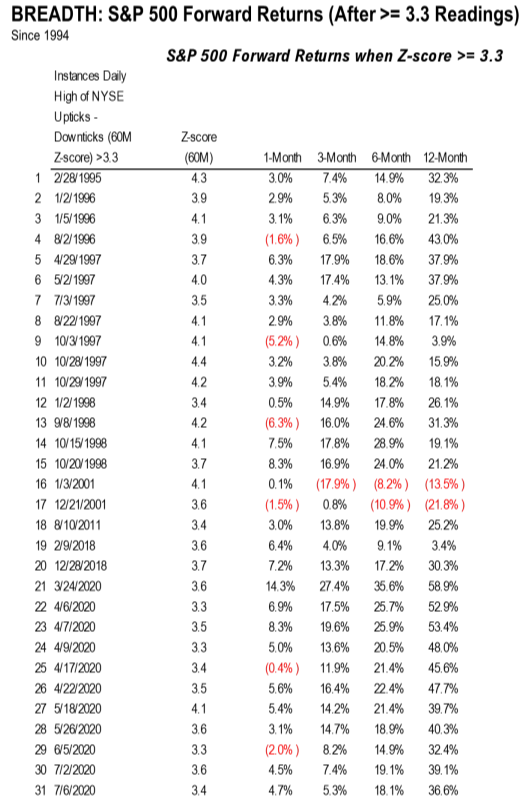 Still, the most important rule of the last 40 years, is “You Never Fight The Fed." – negative

The US and UK tend to move together with the US leading when it comes to economic cycles. This has historically also applied to the rest of the world even when one looks back through the centuries. While the world is more interconnected than ever, connectivity has always existed from a currency exchange and government bond interest rate market, which explains why global recessions are not coincidental.

The Bank of England recently hiked interest rates by 0.75 percentage points to 3%, the biggest rise since 1989. The BoE warned the UK is facing its longest recession since records began, saying the county would face a "very challenging" two-year slump with unemployment nearly doubling by 2025. This is in keeping with past recessions in the US and UK as unemployment always soars as recession takes hold. By raising rates, the BoE is trying to bring down soaring inflation as the cost of living rises at its fastest rate in 40 years. The issue is that this has little impact on supply-side inflation which has been a significant contributor to inflation.

For homeowners in the current environment of rising rates, owners coming off fixed-rate deals could see their interest payments increase by around 80% a year if they refinance today. Rates are more than double what they were at their low point. UK's Rachel Reeves said families could not withstand such high rate rises "when we've got rising food prices, rising energy bills, and now higher mortgage rates as well.“ The global macro environment which is arguably the worst over the last century naturally includes the US in the discussion. But with the US Fed suggesting (due to the most recent CPI number) less aggressive rate hikes, the dollar and 10-year Treasurys may have peaked for at least a little while.

A lower overall 10-year yield would suggest lower inflation could be coming just as rising yields predicted higher inflation earlier this year. But Powell's hawkish testimony at the last Fed meeting did little to suggest that rates are close to their high point as far as the Fed is concerned. The issue that I have not seen addressed is how the Fed is supposed to deal with servicing a level of debt that we currently have while interest rates rise.

Remember, every 1% rise in interest expense corresponds to an additional $568 Billion in interest expense. This means that the debt service is costing over $1 Trillion MORE in interest expense. So, the Fed will then have to print money to service the debt, much as we saw happen in the UK with the BoE. This financial trick by central banks enables them to hike rates while also doing a "QE-lite". The US Treasury pumped $165 billion into the economy since the start of Oct, just as we were heading into midterms. This more than cancels out the Fed's $90 billion per month "QT".

This form of money printing to service higher rates of interest might be like Chinese water torture, a slow process where markets drag for a time. Maybe we see a lot of chop-and-slop ahead without any firm prolonged trends in either direction especially since Thursday's CPI came in below estimates across the board. CME Fed Futures now puts odds of a 50-bps hike in Dec followed by a 25-bps hike in Feb, or a lower target rate. So, the "uncle" moment of capitulation where markets engage in a firm downtrend much as we saw in late 2018 may be further down the road. I believe that this could be an issue should Europe's situation become more grave than what is being seen in the UK, or somebody decides to use Nukes in the Russia/ Ukraine conflict, or if China tries to exercise its desired control over Taiwan, just to name a few.

if the market has made a major bottom similar to the ones it made in bear markets/corrections of the past, it’s still in the VERY early innings. It would be like October/November 2002, March/April 2009, or March/April 2020. Making money in the rallies that followed those declines did not require buying on day 1 or even day 20. So, I think we have some flexibility to be more careful and still make money in the long run if it turns out a major bottom has been struck. But if it remains a bear market, I think exercising caution will be prudent. Black swan events can't be prepared for, hence the name Black Swan, but there are already very serious problems still out there that should keep a lid on global equity markets. They say bull markets climb walls of worry. Well, this wall is becoming quite tiresome!