Is Jerome Powell Going to Be Naughty or Nice?

If there haven't been enough interruptions already, this week should be the last big week of the year, with five major central banks scheduled to meet and nine more from emerging market countries. And yesterday's PPI was not the most welcoming of numbers, as evidenced by the clear implication of high inflation at the producer level. Fed meets today, markets seem to be pricing in a policy shift. Turbo Taper? Tapering won't unclog ports, end COVID lockdowns, or resolve supply chain disruptions. Anyway, the point is that the markets seem to already be pricing in a shift. History has said, S&P 500 gains 15% in six months after the first Fed rate increase, 18% in the first 12 months. What I am still quite focused on is the current state of interest rates. Given that the markets are a discounting mechanism, it seems to me that because the 10-year US Treasury is having a tough time staying above 1.5%, that not only are most portions of inflation measurements truly transitory, but the bond market is saying that the economy is far from rip-roaring and therefore rates should be locked in this range (low) for some time to come.

So what else is important that is going on? First, we are now done with Q3 earnings. 6 out of the 11 S&P 500 major sectors have shown earnings per share revisions to the upside thus far in December, as the percent of overall upward revisions inched up to 71.0%. I think stocks remain on the defensive this week, but with the Fed Meeting upcoming we could get some "squaring up" into the meeting. Also, remember that this Friday is the last "Triple Witching" day of the year, given that it is at the end of every quarter.

Getting back into the meat of the matter, last week the CPI (consumer price index) came in higher than expected at up 6.8% overall, but core inflation up 4.9%. So, everything must be fine right? Well, NO! Real wages fell 3.4% year/year as citizens lose ground to inflation now 7 straight months. According to Ryan Detrick of LPL Financial, "Bottom line, we believe the first quarter of 2022 could be the peak spike in inflation, Fed bond purchases end in March / April, and liftoff potential in September 2022." Also, the amount of dollars printed this year is equal to just over 50% of all the dollars ever printed in the country's history. Of course, the market does not care until inflation (or anything else) becomes a problem. And oh ya, by the way, Evergrande, the largest real estate company in China, officially defaulted on their bonds Friday. Isn't everything lovely?! So how about some good news?? I know, tough to find, but it is the season, and many analysts are now coming out with their 2022 forecasts.

In his weekly article, John Stoltzfus of Oppenheimer titled his piece, "How High the Moon?" This surely doesn't look like something negative, and it wasn't! He started with, "We initiate our price target for the S&P 500 by the end of 2022 of 5,330. Our price target is based on our earnings projection of $230 for the S&P 500." As for "why," he had a number of assumptions. To name a few:

To me, if the economy continues to build momentum and interest rates stay low, this should bode well for growth companies. And if oil stays in check, then the intermediary pricing of goods and services will stay manageable as the consumer doesn't need to spend the lion's share of their money on gasoline. Also, you will notice below the incredible emotional sensitivity to the market digestion for the last couple of weeks. In this short period of time that the new variant has been all the buzz, the ratio of Bulls to Bears has almost dropped to the level it was at in late 2018 and March of 2020 when Covid initially hit the world. See the chart below: 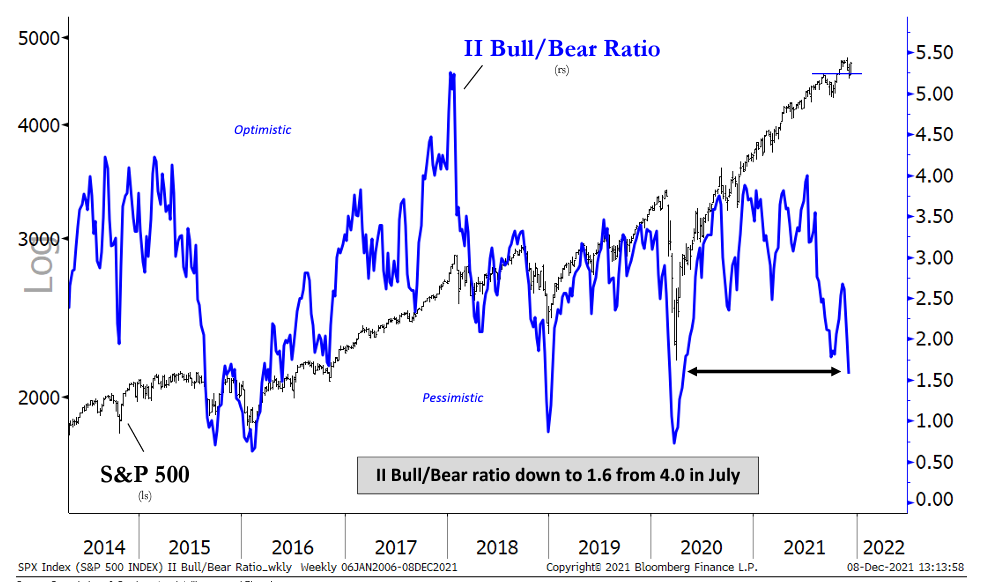 So, What Am I Seeing "this time" that investors should be focused on?

As I wrote last week, enough evidence was in place to form some sort of low (see above chart again); all that was missing was to see the selling pressure abate and that seems to have finally occurred for now. The last couple of weeks have likely shaken many out of positions they felt good about just before the Thanksgiving holiday. The resultant bounces off the recent lows have been just as violent as the weakness that preceded it, which seems to happen more and more these days. The S&P 500 was at a new high Friday, so much of the recent weakness has already been retraced in the large companies. BUT IF WE DO STALL OUT AROUND HERE AND GO TO LOWER LOWS, WE SHOULD BE PREPARED FOR SOME DEEPER SELLING. Some additional factors that I noticed (and were referenced nowhere) were the grossly overbought commodity trades (oil, gas); geopolitical tensions; worries about China's economy due to Evergrande leading to a possible global recession outside the US, and of course the saber-rattling in Ukraine.

On the positive side, along with the chart of the Bull / Bear ratio seen above, there is another weekly chart that I pay attention to; this is the SentimenTrader's "Smart Money" and "Dumb Money" indicator. this indicator has hit its most extreme point since the Covid Crash in favor of the "Smart Money" bullishness. The spread between the two recently hit 45% and according to SentimenTrader, when this measure is above 40% it has historically led to an annualized gain of 24.6% and when above 45% an annualized gain of 52.6%. That seems to suggest a positive environment for stocks!!!!  This is the far right side of the chart below. Notice the green horizontal line has proven to be a good time to add and the red line a good time to take money off the table. Even though the low in the S&P 500 (top black line) is not as aggressive to the downside as it was in March of 2020, the emotional measure (the blue line) is almost at the same lows! 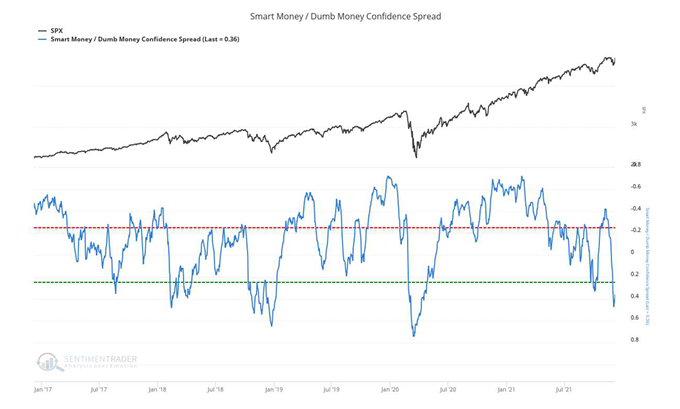 Since the December 1st low a couple of weeks ago, the market has begun to reverse course in the presence of oversold conditions for some shorter-term indicators. While more demand follow-through is needed to confirm a sustainable new advance and rejuvenated bull market, early data are promising. We had a very uncommon, and quite compressed series of extremes in the last couple of weeks. On the downside, we had two 90% down days on November 26th and 30th. This was immediately followed by (and sort of has to be if the negative momentum is to be extinguished) three 80% up days out of four consecutive trading days on December 2nd, 6th, and 7th. This tends to be a pretty important statement. What is making this normal oversold low followed by a rejuvenated bullish bounce is a seasonal fly in the ointment. Since it is the end of the year (a good year overall much like 2020’s rise), there are four things that are in place that seem to be keeping this normal healthy bounce from continuing itself:

The Build Back Better Act seems to have been put out to pasture as the US citizenry’s opinions of the party continue to worsen. The saving grace for the economy has been earnings, earnings, earnings, and the prospect of these earnings increases continuing into 2022 as global economies opening up remain in place. This of course, in the short run, depends upon the Omicron variant being light, spreading quickly, and dying off just as quickly. This seems to be the course of most people's thoughts, yet at present, there is not a lot of positive opinions being bantered about. I will be watching closely and making changes as I see fit. Most importantly, you as an investor need to reflect on how the year has treated you and make sure that you have done all that you can to help yourself savings and tax-wise in the next two weeks. Because once 2021 ends, it's all in the books! Hope you are enjoying some nice Christmas cheer and we wish you all the best.