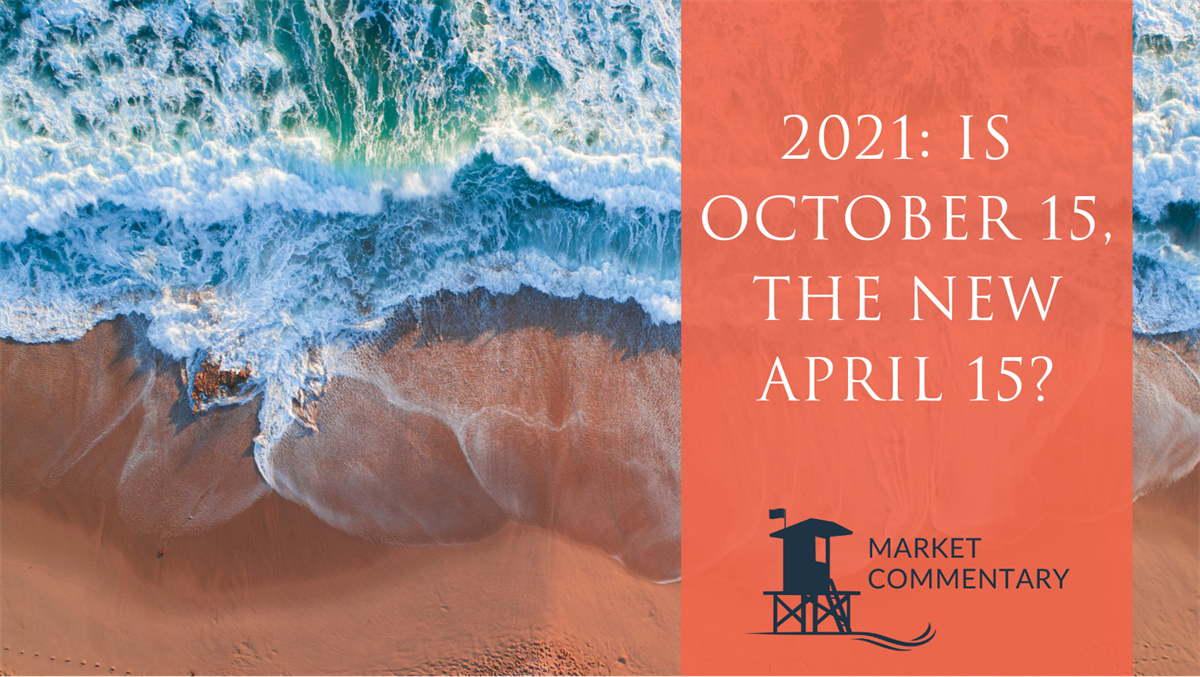 This week is set to begin earnings season for the third quarter of this year. It should be kicked off with earnings reports from large money center banks. If one were to look at the markets from a week ago, things were starting to look up again after a difficult end of August through the month of September. It was up a week ago Friday when a major pharma announced a possible pill that was to act a bit like Theraflu, but it was said to decrease hospital visits for COVID patients by somewhere in the area of 50%. On Monday of last week Mr. Market tried to take it all back but couldn't put in a worse number and the rest of the week showed some level of stability. Is it waiting for a great earnings report? Was it hoping for a great employment number last Friday? Or is it something that the media and the prognosticators haven't quite been able to put their finger on yet?

Before I go into the labor number from last Friday, I thought I would pose a little bit different idea of what could be going on this week. To begin with, it is the third Friday of the month this week and that means stock options expiration. This could be part of the reason for hesitancy this week, but I think it could be something that I haven't seen anyone talk about. This Friday, the 15th of October, is the final day for the extension of filing taxes for 2020. Although 2020 was clearly a strange year for anyone on the planet, for the stock market it was actually quite good. I have been talking to many CPA's and it seems that every one of them is getting hammered by last-minute filers. Could it be that they are all forced to sell to write big checks? Could it be that they are very concerned about the ultimate outcome of the increase in tax rates, both for individuals and corporations that are being bantered about by the current administration? Just a thought really, but when a stressful situation in the markets is coupled with a catalyst type of date, stranger things have happened!

But enough of that. Let me go into the employment number for last week. The reason why this is important is of course what it implies for the economy going forward, but also it is super important to understand the relationship between interest rates, currencies, economic expectations, and the markets. I know, I'm a little strange because I get into this stuff, but I do feel it is important in understanding what could be happening in the markets:

Whatever the case may be, we have tighter labor markets, increased oil prices — which is an implied tax on the consumer due to higher cost of gasoline vs. more money to spend on goods and services, and wage rates going up. All point to the economy on the mend. When coupled with fewer infections being reported and death rates declining, we could be getting ready to come out of the backside of the pandemic. Only time will tell. The past two weeks have been the year 2021 sort of compressed in a nutshell. For the last few weeks, I have been addressing the small-cap index (Russell 2000) as it has most clearly shown that it has been locked into a very tight tug-o-war for the last 8 months. The large-cap S&P 500 has come back and tested its breakout points from months ago. All in all, we are still in an advancing market. Maybe not at the level of ascent experienced last year, but a breather was due. Large technology companies have actually come down to what appears to be quite attractive levels: 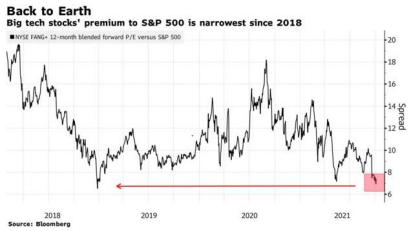 What I found particularly interesting was the quote from Jeff Saut of Saut Strategy on Monday morning. Jeff said, "Last Friday was session 2 in the current 'selling stampede.' Recall that such stampedes, both on the upside and downside, tend to last 17 to 25 sessions. I have seen some go longer than that, but it is rare. It just seems to the rhythm of the thing in that it takes that long to get everyone bullish enough to throw in the towel and buy, or in the current case, bearish enough to sell just in time to make a bottom."

Bloomberg actually reported the cheapness of the tech sector relative to the S&P 500. The NYSE FANG+ group is trading at a spread relative to the S&P 500 that is the lowest since December 2018. This seems to align with data from J P Morgan Positioning Intelligence which shows that Mega Cap tech net exposure has fallen back to the lowest levels since the start of 2018, while software has seen net selling since July. This can be seen below in the Smart Money vs. Dumb Money Index! 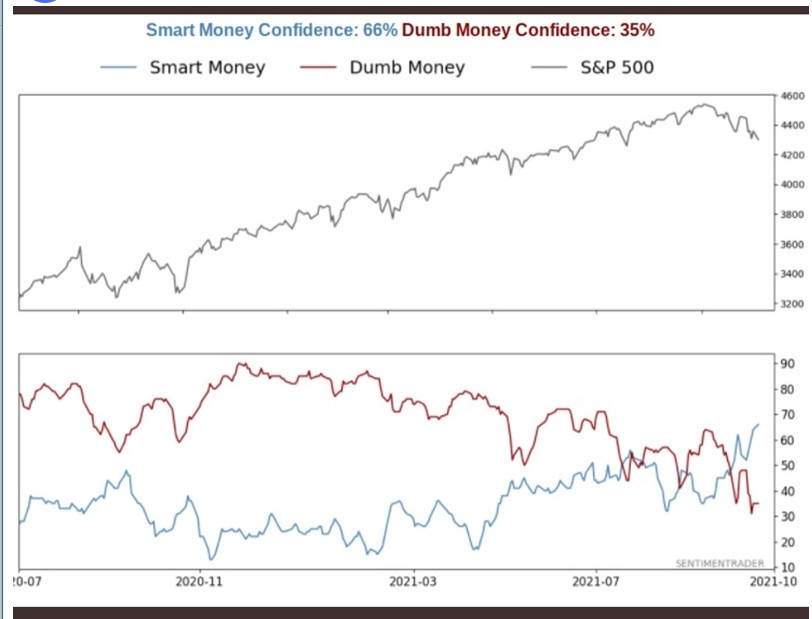 This brings me to one of my favorite things to see. That is the headlines. I mean I find it incredibly interesting that after the market has been in a selling stampede for 5 weeks, all of the sudden the press is going to tell us how bad it is. So here were a few of my favorites:

In the end, it appears that these points have already roiled the markets, and the markets tend to be a discounting mechanism, not a mechanism that reacts to issues as they are presented. Could these items already be priced in? Some could be, but we still don't really know what is going to happen with the debt ceiling, rising tax rates, and the ultimate top in the price of oil. So, again, usually by the time these topics are trending on Twitter and making the front page of Yahoo! Finance, the moves are mostly done, which is one reason the news always seems to be the most negative at bottoms and the positive at tops. While my approach isn't perfect, it assumes that the market knows more than we do and if anything is going to be major enough to take stocks down significantly, it's going to show up in the price charts and indicators I follow. And no, I don't consider the current 5-8% decline in the indexes as significant, even it feels that way after several months of truly frustrating action in prices. What we have seen over the last few weeks remains well within the realm of 'normal' digestions, yet at the low last Monday, things were stretched to a point that is normally seen at near-term extremes. I can't say that the tough times are over, but I can say that the earnings reports and forecasts we are about to see could give us an indication of what we could expect. And I will finish with the seasonality chart. Here you can see what typically occurs at this point in the year. 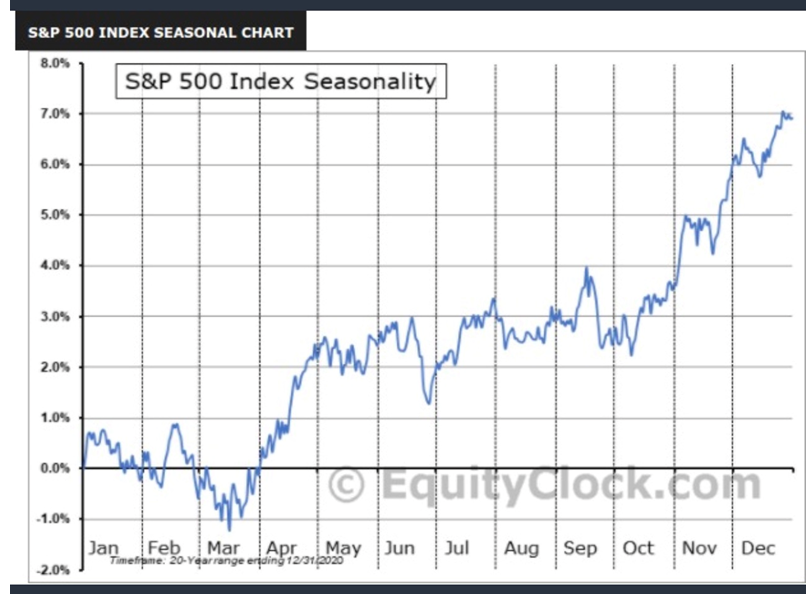