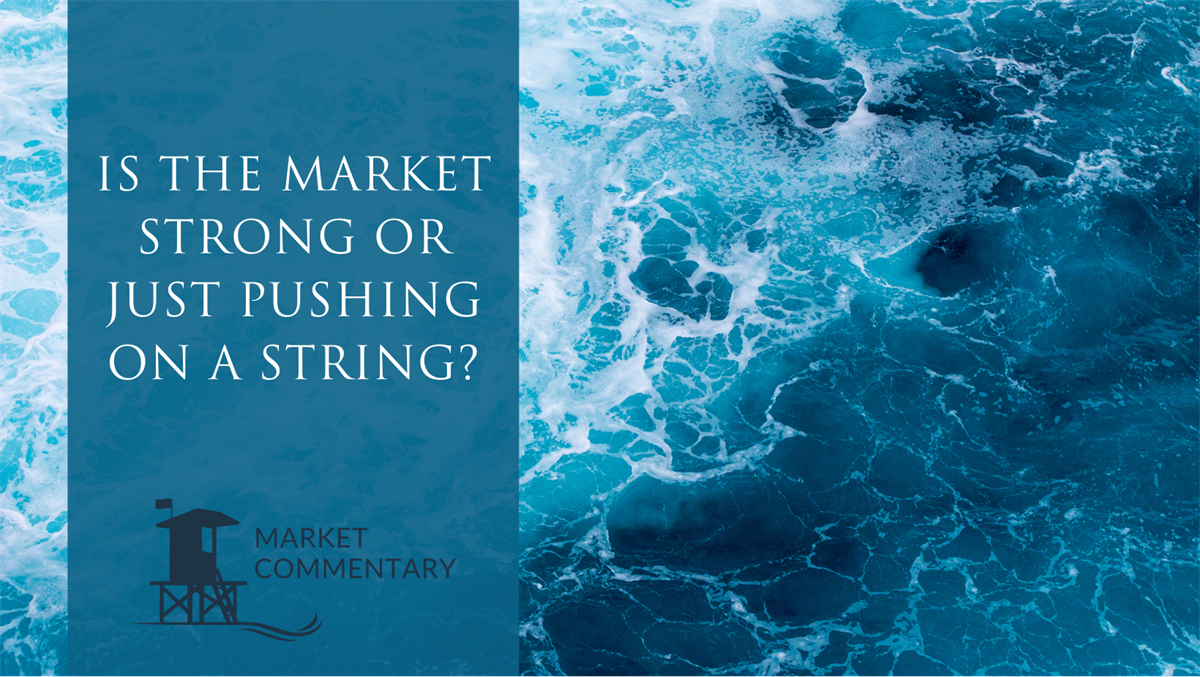 Is the Market Strong or Simply Pushing on a String?

"Secular bull markets tend to last 15-20 years and sometimes longer. So, a case can be made that we are approximately 12 years into this bull market and there is no reason not to expect this one to extend for years to come. In fact, again as I have stated before, "I think this will be the longest bull market of my lifetime."

Before March 2020, there really hadn't been a comparable broad market sell-off since the 2007-2009 Financial Crisis, and many stockholders considered themselves to be "long-term investors,’ yet had not really been tested on that point in more than a decade. It's easy to be an "investor" when things are going well, but not so much when stocks are falling 35%, 50%, or more. My definitions of "trader vs. investor" have changed little over the years, but here is how I make the distinction. If you are truly an investor, you believe in a company's (or the general market's) long-term prospects, and as long as nothing changes fundamentally or structurally to disturb that view, then "price" is really just a way of keeping short-term score and determining when it represents a good value or this is a bad value. This is why in talking with you (my clients, friends and fellow professionals) I really don't know how somebody can consider themselves a long-term investor while also selling out anytime a company drops for longer than a day or a week. Yet, we as people become desensitized by whatever the current environment is. Bottom line: coming into the beginning of this week, the broad markets had experienced a number of down days in a row. Coming into the end of last week, it had still been a market of stocks more than a stock market. By this I mean that there are parts or sectors of the market that are downright ugly and decimated, while others that seem to be the eye of the storm. Last week was really the first time that we have experienced a down market in quite some time; and by bad market I mean a decline of almost 3%.

So let's take our face off the page of how one should be investing and talk about the here and now. In Barron's this last weekend there was a very telling statistic in the Up & Down Wall Street section, "over the past three months, the Nasdaq 100 (the basket of the biggest non-financial growth stocks- almost half of which are the FANG companies) is up 12.8%, while the S&P 500 has risen by half that, only 7.1% (which is also 25% these same big technology companies). But the equal weighted S&P 500 is up only 3.6%. This is a blatant example of if you don't own the right stuff, you aren't winning. So, reflecting back to the paragraph above, are you a short-term trader or an "investor?" Well, since back to March of 2020- clearly not long ago at all even though it feels like an eternity ago, these same companies have continued to lead. So due to the deluge of negative press about the new variants of the virus, the takeover of Afghanistan by the Taliban, the impending removal of Newsom, or whatever it is that fits your own personal narrative, one has to ask themselves how these companies keep going up. Aside from the disaster de jour in the media the question of valuation in the markets keeps coming up. Basically, to many, the markets simply should not be going up. Well, I want to quote Ed Yardeni who was the interviewee of the week in Barrons. Mr. Yardeni was asked very simply, "Why is a P/E ratio of 22 the new normal?" Before I give his comments, please know that the P/E ratio is a measure of Prices divided by Earnings to get a number. Then we look back in time. If the number is high, the markets are considered overvalued and ready for a decline and if low the opposite. The average is approximately 14-16. Mr. Yardeni answered, "Because there's a tremendous amount of liquidity in the system. All the liquidity provided since the start of the pandemic hasn't been spent. The money supply is roughly $5 trillion higher today than it was right before the pandemic. It's equivalent to almost a year's worth of nominal GDP. That's unprecedented. A lot of liquid assets are just sitting there earning nothing and are available to keep bond yields relatively low and boost growth, earnings, and stock prices." This is absolutely it in a nutshell. If there is no money on the sidelines, there is no money to buy the market up higher. If there is more money than has ever been seen (Yardeni said unprecedented) and there is zero return on cash or short-term bonds and CD's, then the money only really has one place to go. Well, real estate prices are telling you where a lot has gone, but for money that needs to be fluid, the equity markets are really the only place to be. As a matter of fact, I heard of three different large companies declaring massive stock buybacks and 20% dividend increases. Why would they be buying back their own stock if they simply couldn't find anywhere else they could trust to put their cash they have lying around doing nothing!?

We are coming out the back end of this pandemic and many are becoming scared once again due to the Delta variant. But what is happening with small and medium sized businesses and parents of elementary age children? They are simply tired of being forced to not be able to live their lives. There's a tremendous amount of entrepreneurship in our country that is not appreciated particularly by the progressives. Again, according to Yardeni, "the greatest periods of prosperity are the ones with the most income and wealth inequality. I think that beats the alternative of a lot less prosperity and more equality, or extreme examples like Cuba and Venezuela where just about everybody's equally poor. I distinguish between entrepreneurial and crony capitalism. Profits generated by entrepreneurs are what create jobs and increase prosperity." For those that are choosing not to work because they are making the same amount sitting around collecting unemployment, they are simply treading water. The object of unemployment insurance is to provide a backstop to keep our workers' heads above water during a difficult time. It isn't something to be taken advantage of because it is easier than working. For those that are forward thinking, they are working, creating new companies that are meeting unmet needs. They are going back to work either remotely or in the office but working very hard all the same. The last question Yardeni answered was what he felt should be invested in. He said, "I don't see much in the way of opportunities in the bond market, with yields on 10-year Treasuries at 1.3%. For now, I'd overweight U.S. stocks. The valuation on small and medium companies is historically low relative to the larger ones, and that story doesn't make sense if there's no recession. Many are great companies that probably won't have an opportunity to grow before they're taken over." What kinds of companies he was asked, "own companies that are either providing technology or using technology heavily- to run their businesses, to offset labor shortages, to increase the productivity of their workforce."

Earnings are mostly over for the second quarter and lots of news is out, geopolitics are dominating given the Afghanistan fiasco- that is almost too incredibly bungled to believe it was just incompetence. Late August tends to be a quiet to lower period leading into September where the final flushes are normally seen before a bottom in October happens and the markets tend to take off. So I ask you, are you a "trader" or an "investor?" Does the tax ramifications of a short term sell overshadow the fears of a longer term or deeper decline? These are good questions with really tough answers. You have often heard me say, "I manage to two masters; the performance master and the tax master. These two don't know each other and don't care about each other." If the environmental backdrop still proves to be a good one for the continuation of the uptrend then we should remain invested. If the concern is that the party is about to end, then maybe taking that bitter tax pill might be the best course of action for purchasing power maintenance. You all have your own set of values, but don't listen to the media, look at what you own and why. If they are technology or extreme beneficiaries of technology, maybe you should listen to Ed Yardeni. Heck, he is a lot smarter than I am! Goldman Sachs raised their price target on the S&P 500 to 4700 for this year. They also raised their target for 2022 to 4900 and their earnings estimate for 2022, according to Jeff Saut of Saut Strategy, both of these numbers are too low.

We have entered a new chapter of our business as Tower 68 Financial Advisors. We have done so to be better for you, to have more answers, to provide more insights. Please take the time to ask us. This is what keeps us current on what you need and how we can work hard to get the answers that can help make your life a better place. We look forward to hearing from you!