It Feels Like The Market Is Looking In A Mirror

To me, this current market is starting to feel a lot like it did when COVID first hit in 2020, yet this time we know what happened. In 2020, there were very severe cases that, to many, became lethal. There was no vaccine as of yet, and there was really no way to measure the eventual effect on the economy, so the financial markets were left in limbo. The short-term outcome was a decline, a rather severe one at that, but then a recovery when the US Government showered the market with capital, and demand at all levels in the economy was very strong. People began stockpiling and companies, after initially being afraid of a complete shut-down in demand, were faced with the need to "over order" to meet an unquenchable demand for many many products, from cars to toilet paper. Today, we are faced with a new strain. One, we are told, that is dramatically more contagious. Even the vaccinated aren't safe (in some reports the vaccinated are even less safe as there is a preponderance of infections in greater numbers in the vaccinated). I am not here to debate if this is a true statistic or not, but what I am happy about is that this strain appears to be dramatically less severe and, as of yet, there are very few deaths associated with the Omicron variant.

So, what gives with the market? To begin with, I think we need to look at where we are in the calendar year and also some other issues that are going on: 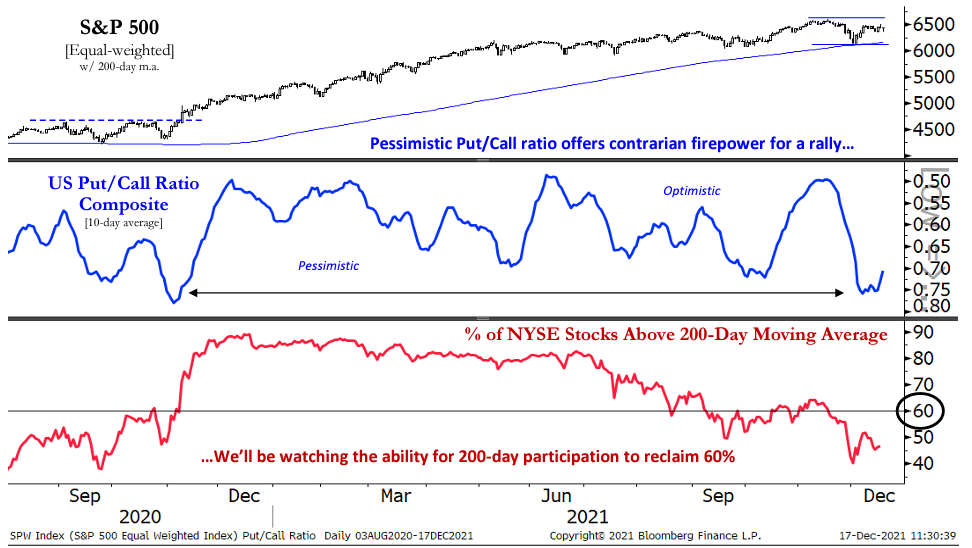 I am sure there are many more reasons, and they will all be crystal clear when we look in the rear-view mirror afterward, but at present, the weather outside is far from delightful and the markets are becoming downright frightful! Leon Tuey said it best in his December 3rd missive, "In my last report, I noted that when Macy's has a Sale, shoppers would line up at the front door before the store opens. Yet, when the market sells off, investors panic and run for the hills. Investor behavior is perfectly predictable. As the market rises, they get excited. Conversely, when the market corrects, they become cautious and as the correction continues, caution rises."

In last week's letter, I actually showed graphs of how oversold the markets were from a psychology standpoint. This week started off extending this decline in attitude and prices. There are currently around 4,400 US stocks above $2 that trade on the NYSE and NASDAQ exchanges according to FINVIZ.com. Of those, roughly 51% are down — 20% or more from 52-week highs, and over 20% are down more than 50%! Speaking for myself, I don't need a follow-through day from Investor’s Business Daily to take advantage of some of the decliners or those that have ignored the decline entirely. Although the action after the Fed meeting last Wednesday was quite volatile, not trying to take advantage, to a small extent to the statistically consistent Santa Claus rally would seem like missing the sale at Macy's. I don’t suggest that caution be thrown to the wind, but making sure that choices are not overly speculative would be more appropriate.

The hardest thing to do is to take emotion out of one's thought processes. We are all emotional beings, and there is always a human element involved in our thought process. But I tend to look at things on a broader scale to make sure that one is invested where the greatest probability of success lies. So how do I do this and what do I see? Well, in a very broad sense, there are really only six places liquid money can be, and this is what I see at this point:

So, in the end, the US equity market still seems like the best place to be. Maybe not today, but heck, Rome wasn't built in a day either! So, finding where to put one's dear capital in the US equity market is really still seeming to be the best option. So, this brings me to an article that I read this week. The article is titled, "Big wealth investors are likely to put money to work in stocks after amassing record levels of cash." YOU REALLY MUST READ THIS ARTICLE!!!!

The world is an unsure place, but money will always be hungry. It will need a home. It will want to be treated right. And right now, there is a record amount of cash on the sidelines. When will it run onto the field? To this, I have no answer, but as I showed in my letter last week, we are close to an extreme. These extremes tend to reverse themselves. If they do, this year-end could be a good one. We will see.