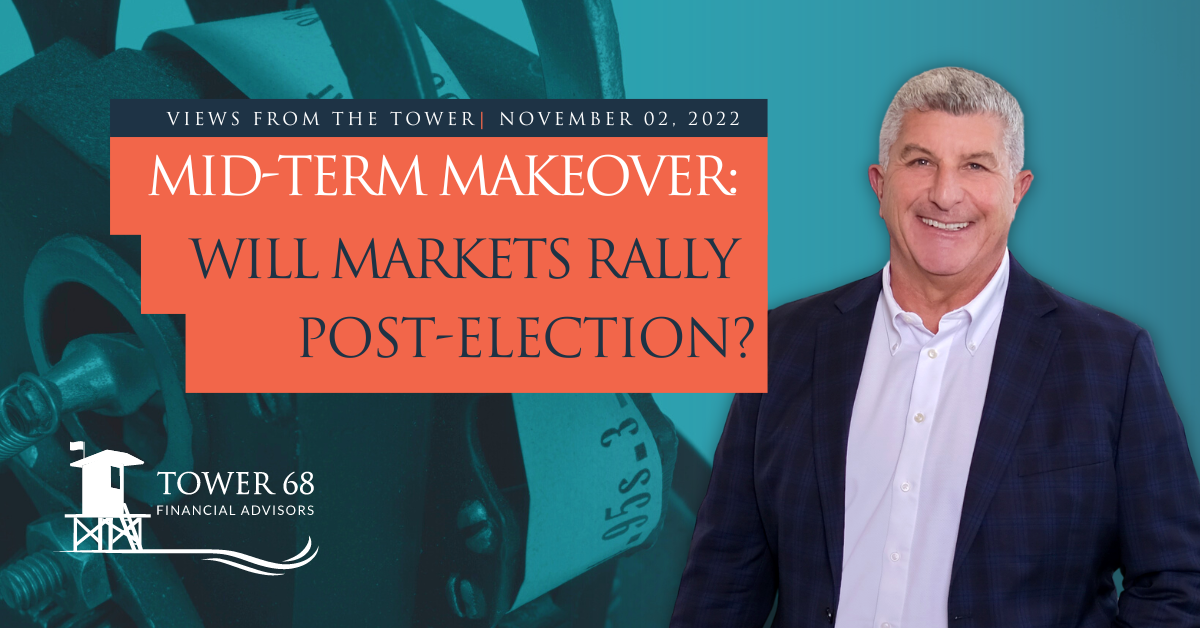 With a surprising level of consistency over the past 100 years or so, stocks have followed a broad pattern that coincides with presidential terms. The months leading up to midterm elections have generally been the worst in what is known as the four-year presidential election cycle. But the stock market is about to enter a sweet spot. Stocks have usually rallied in the year after the midterms - no matter which side wins. Market veterans take these patterns seriously but aren't counting on them in an economy plagued by soaring inflation, rising interest rates, and fears of recession. So I want to take you all back to a chart I have shown before. The last real rally in stocks was the July - August rally earlier last quarter. 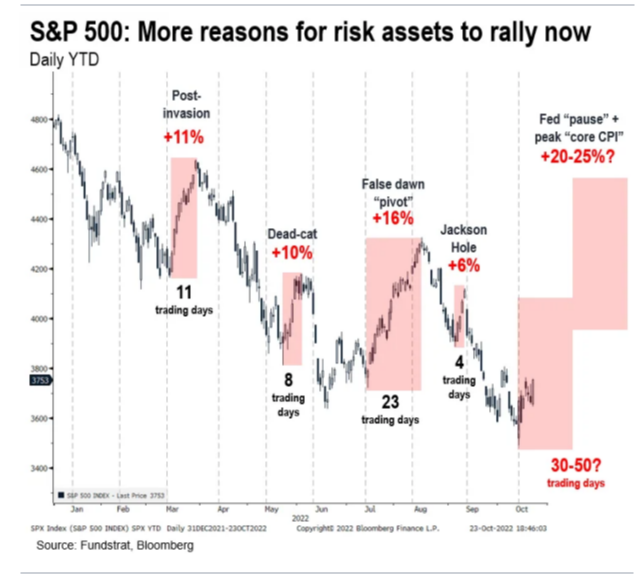 According to Mark Hackett, chief of investment research at Nationwide said, "We are now entering a stage where all signs point to a recession- assuming we aren't already in one." He then went on to say, "the recession may already be priced into the markets, in which case the next bull run may be faster and come earlier than many investors expect." There is a growing sense in the markets that the worst of the inflation issues are behind us, whether or not the Federal Reserve wants to claim success. This week the Fed needs to look at pending home sales, which are down 30% year over year and down 10% just for the month of September. Home prices had a tremendous stretch of strong gains- that is clearly over. Reverberations from a collapse in housing activity will probably be felt in 2023. Given that housing represents over 20% of our economy, and that it tends to lead to our unemployment rate, the direction of employment in 2023 is clear, see below: 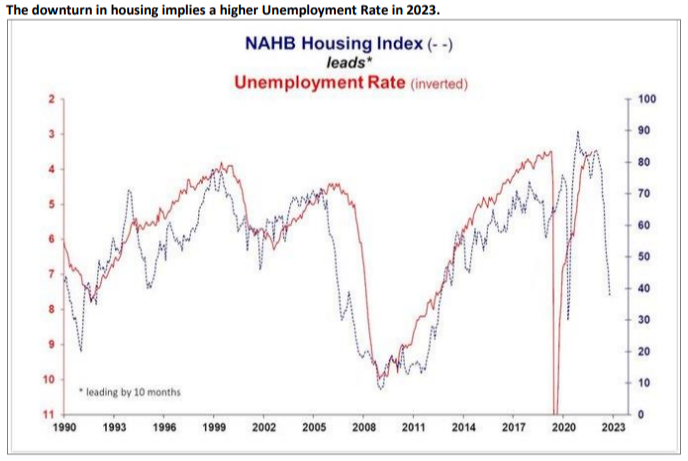 Back to the presidential election cycle one more time, the party of a sitting president tends to lose seats in Congress in midterm elections, and high inflation makes matters worse for incumbents. Those are key findings of Ray Fair, a Yale economist whose long-running election model relies only on economic factors and shows the Democratic Party in an uphill climb this year. The issues in this election are enormous, and the vast differences between the two political parties are well-chronicled. Yet, for the stock market, history suggests that the outcome of the elections may not matter much. Shocking though this may be, since 1950, the midterm elections have brought an upturn for stocks, no matter which party has won, and no matter the issues. 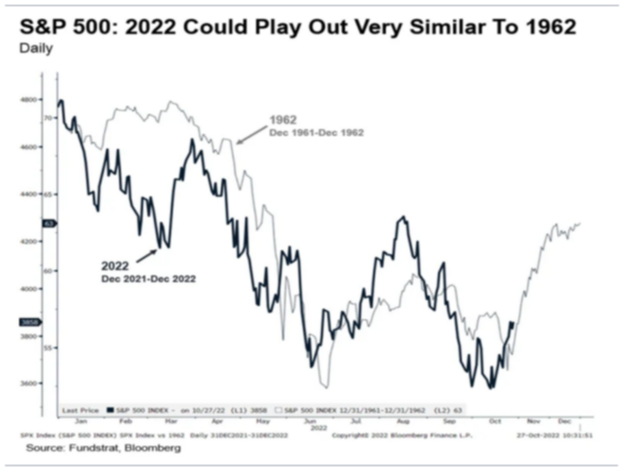 The US stock market has generally flagged in the months before the midterms and prospered after them (as we are currently experiencing now). And it has often excelled in the year after the midterms, typically the best of the four-year cycle, as evidenced by the chart above. Ned Davis Research, an independent investment research firm, compared stock returns from 1948-2021. The four-year average returns are as follows:

Why is it that the returns seem to come out like this? Well, I am not sure, but I surmise that in year 1 the administrations do things to stimulate the economy by making the most difficult moves (sound familiar), in year 2, nothing has really happened, and the difficulties arise, in year 3 the current administration tries to do anything in their power to give the economy a surge through expansionary fiscal and monetary policy, setting themselves up (hopefully) for their successor. So given that the odds makers in Las Vegas call for a pretty high probability of a turnover in Congress and a Senate leaning to a changeover as well, this leads to political gridlock. This is actually a really good thing! What the markets hate is what the markets don't know and can't account for. If we have a Democrat in the oval office and the houses run by the Republicans, nothing the president tries to pass ends up getting done. The markets love this as they don't have to account for any major changes in policy. The most recent survey of the two races (Congressional and Senatorial) look as follows: 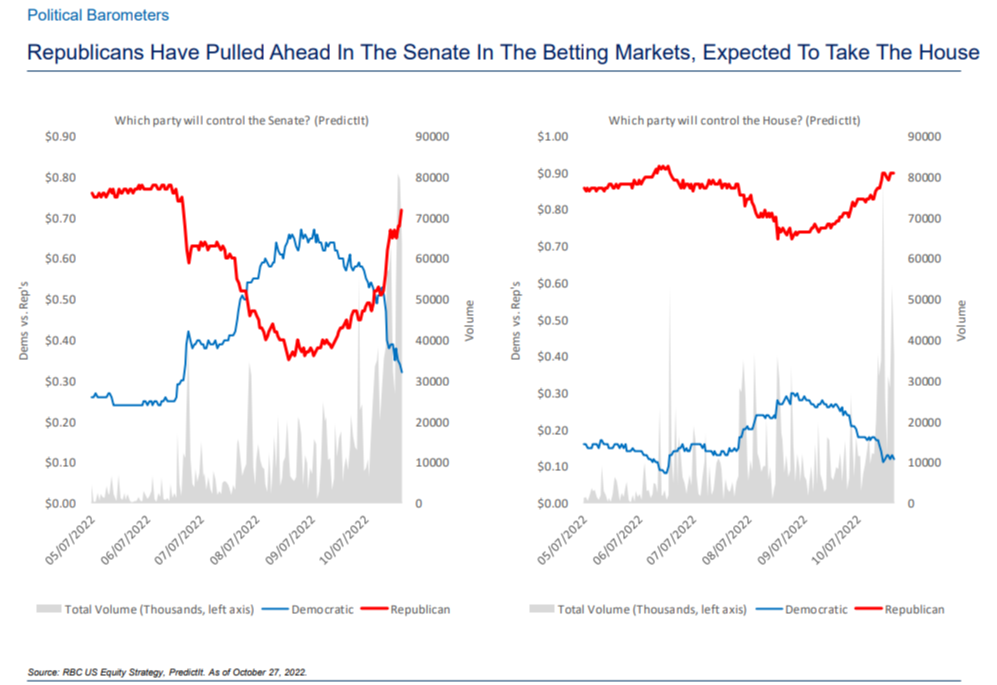 In closing, I want to show for the umpteenth time the current market chart overlaid on the presidential election cycle chart. Only this time I have also put in the dates of the current year that are important between now and year-end. The first one is the low of October 9th, the next is this week's FOMC meeting on November 2nd, the next CPI report on November 10th, the next CPI report on December 13th, and the last FOMC meeting on December 14th. 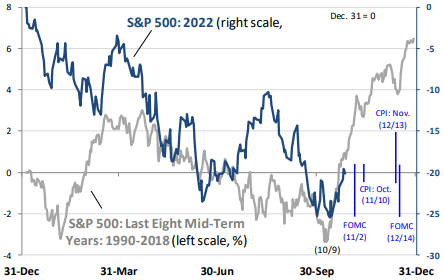