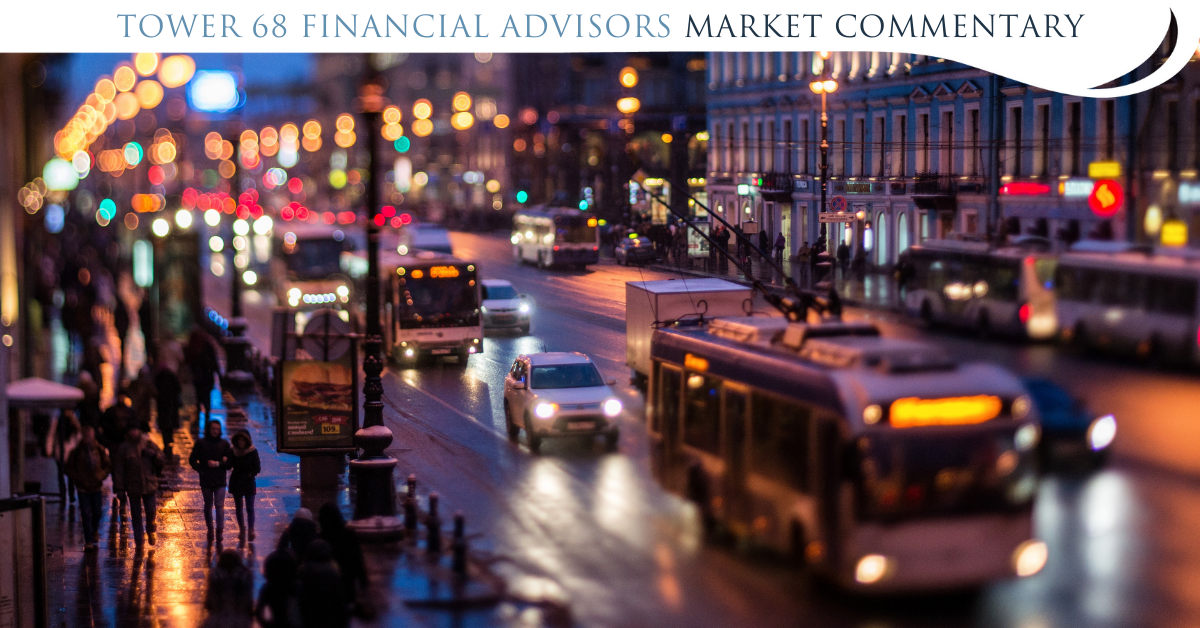 News Aside, Can We Please Get to the Root Of the Problem?

As humans, we are inherently emotional animals. As such, right, wrong, or indifferent, we want an answer to a problem. Why did it happen? How bad will it get? How do we fix it? This year has not been pretty for the broad markets. International has been worst, and US Small-Cap a close second, but even the "go-to" bonds that have been the offset to negative equity markets haven't been a good place to hide either. Cash (earning nothing) on the sidelines, or commodities of all different ilk have been the only real place to go. In today's note, I'm going to go over a number of different issues that I feel are important to monitor and track- closely, to look for an answer to the elusive question of "how does this decline run out of steam on the downside?

I would like to take a moment and address the issue that the news media has its teeth sunk into, Russia. At this point Russia may be doing what Putin wants to do; taking back another part of the Old Russia, but in doing so they seem to be doing irreparable damage to their own economy. Their companies are being delisted, their accounts are being frozen, and they have had the most draconian economic sanctions placed on them than most anyone has seen in the modern era. The Russian stock and bond markets have collapsed, along with their currency. Many investors fear that China, which has always wanted to control Taiwan, will use the mayhem of the moment to take it, but China is dramatically more involved in the international financial markets than Russia and this possibility has not gone unnoticed. Look up Hermitage Capital in 2005. Once the threat of a currency being debased is in the offing, they become an island. How this eventually plays out, nobody can be sure, but it will be far worse for Russian interests than it is for the US. It is happening at a time when we are in a state of flux with interest rates and inflation domestically, and it is therefore exacerbating our own "figuring it out" problems, but for them, they have essentially alienated themselves from the entire world.

There was a fairly extensive report written by the Wells Fargo Investment Institute on Friday that covered many topics by basically corralling the overall expectations coming out the back end of this debacle. The key takeaways were as follows:

In the end, according to LPL research, "Economically and Financially, Russia Doesn't Matter As Much As You Might Think." The US has negligible direct exposure to the Russian economy. Second, the weakness in the Russian stock market has minimal impact on the global Emerging Market Index. And third, some domestic sectors have more international exposure than others, which should be factored into sector allocation decisions given the rising recession risk in Europe. In looking at the chart below, it is clear that the amount of direct trade between Russia and the US is negligible. The US imports almost nothing from Russia. It is estimated that the percentage of revenue generated by S&P 500 companies in Russia is even lower! It is the emotional spillover that we are currently dealing with. The second chart shows the amount the Russian stock market makes up of the Emerging Market Index basket, again marginal exposure. Europe overall, Russia, Poland, Hungary, and Turkey make up only about 3% of the index. The big country most negatively affected is Germany due to its dependence on Russian exports. 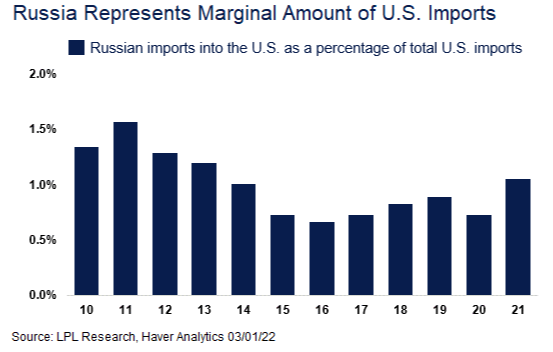 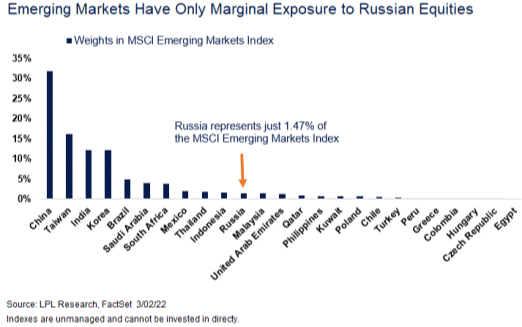 Let's come back stateside for a moment. On Wednesday, we got the ADP revised January jobs report. The report initially showed a decline in January of 301,000 jobs. After further analysis, this number was revised to up to 509,000. This is a revision to the tune of 800,000 jobs!!! This is huge. This is also why the jobs number that came out on Friday then became even more important. If the ADP number was right, then the jobs number should have been strong as well. Bright and early Friday morning the expected number from the brilliant economists was for an increase in non-farm payroll jobs of 423,000. The number came in at 678,000- almost 50% higher than the number expected. Translation: economy stronger than expected, more hiring going on, business gaining steam and therefore more reasons for increased inflation and therefore the need to raise interest rates. When this is coupled with the Russian issue, this leads to an even greater reason for higher oil and general commodity prices which collectively, as I had said above, create an implied higher tax rate to the consumer due to less money to spend elsewhere. See the price charts of Oil, Grains, and Lumber below: 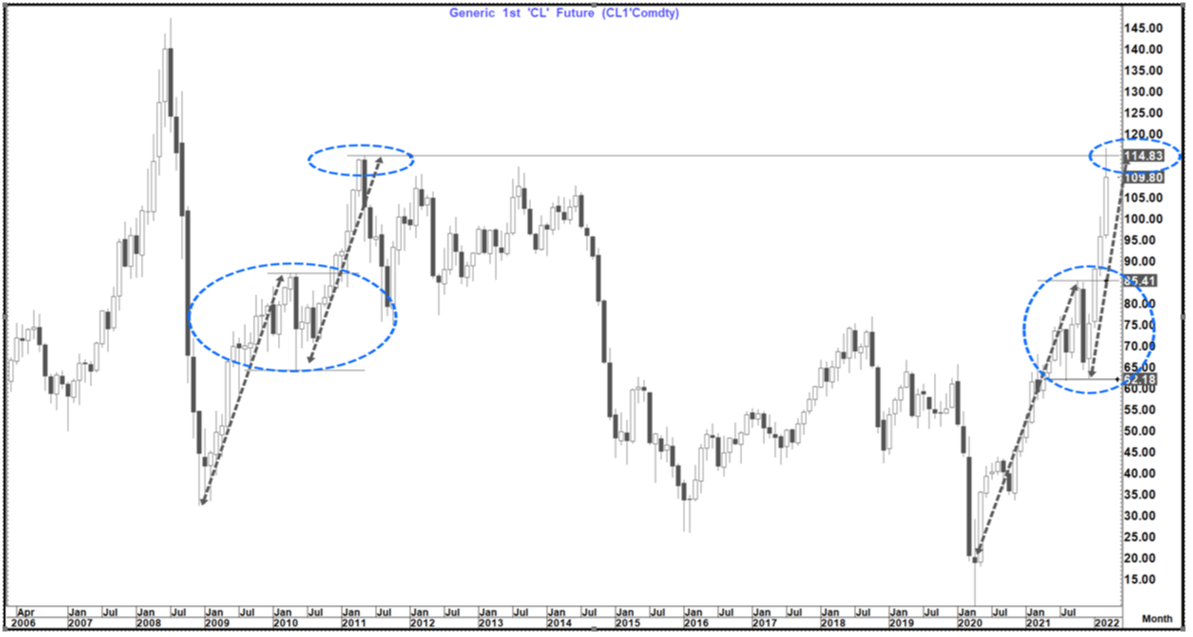 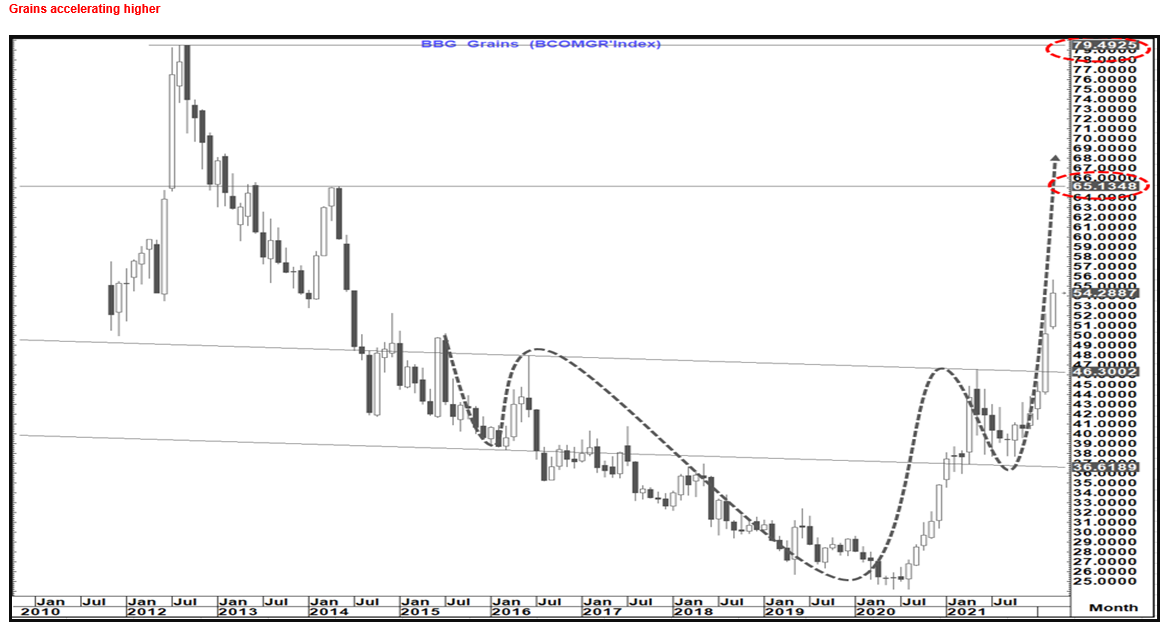 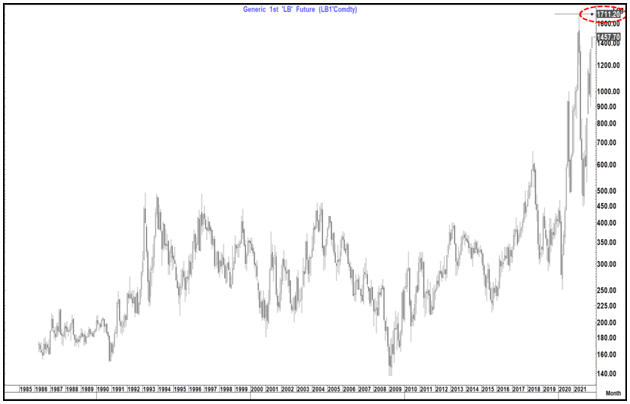 In closing, if you would like to read more on these subjects, please refer to the following articles. These are all different, but all interrelated:

Please note that all of these seem negative and I'm not gonna lie, things seem a little dicey at the moment. I say, "at the moment." This doesn't mean a long-drawn-out period of negativity necessarily, but rather we are clearly in a tough time.

NOTE: I will be following up this week's note with another special note on Friday covering what we usually see at market bottoms. We will call it a sort of "Market Bottom Checklist." I don't know if these points will hold true this time, but I believe it is important to know what to look for and be prepared for when the markets recover. The US Equity markets have been a great place to build wealth for investors for many years, I don't expect this to change. The question is what an investor should look for to give them some indications of what the beginning of a recovery could be and (hopefully) a resumption of the bull market we have been enjoying since coming out the backside of the Financial Crisis in 2009.