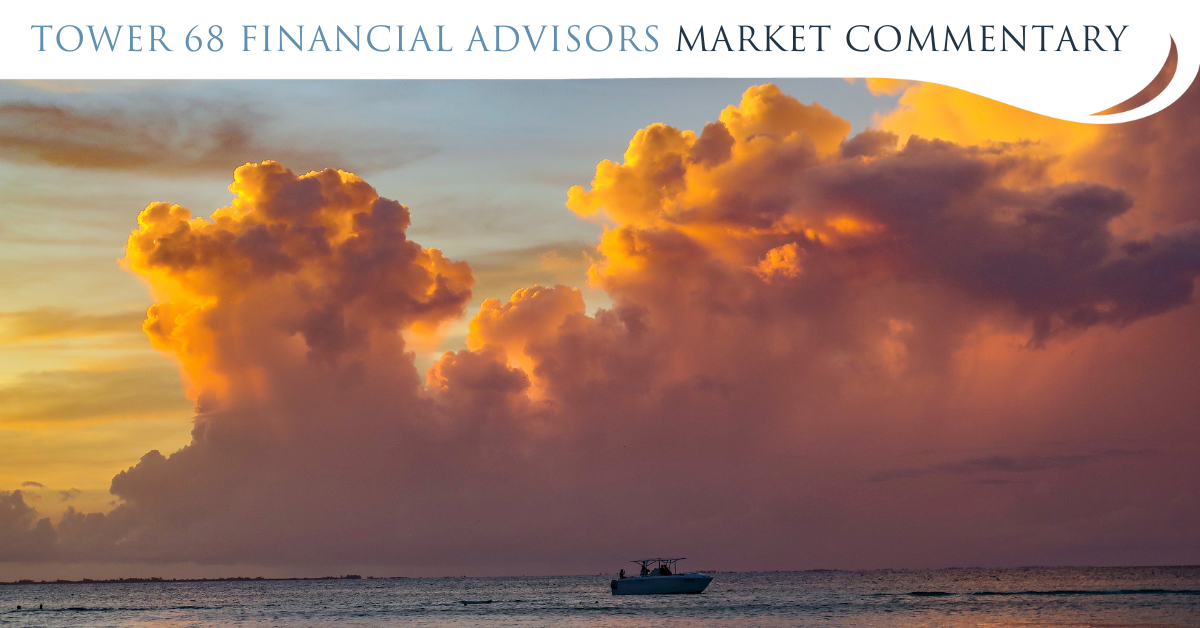 Last Friday, JP Morgan CEO, Jamie Dimon made one of the most irresponsible public displays I've seen in some time. He talked about a "hurricane" hitting the US economy. The drama of this is clearly typical with social media being what it is today, but the equity markets of the world are discounting mechanisms, and it could be that there is a slowdown/recession coming on, but the slowdown in the markets since January seems to be accounting for this. It could well be that good is bad (when it comes to economic growth) and bad is good (as bad reports tend to represent the effects of a slowdown). On Friday (6/3), we saw the May jobs report. Unemployment is at 3.6% (far from recessionary), payroll is up 390,000 (again, clearly not a slowdown), and total hours worked expanded as well (doesn't look like a slowdown to me). What didn’t look so good was that wages were up 5% YoY and inflation in general up 8.3%. This is an issue as I see it as "real wages" actually down. I mean think about it, if prices go up more than wages then a slowdown is in the offing!

So let's look at the markets last week. On Thursday (6/2), "real wages" are down, and the market rallied, and Friday, payrolls were up more than expected and the market drops. The interest rates reacted, the US Dollar reacted and then the equity market reacted as a result. Same old, same old. The reason why I lead with jobs is that this is what Fed Chairman Powell references often and also the fact that job growth expectations for 2022 show that recession risks remain low. 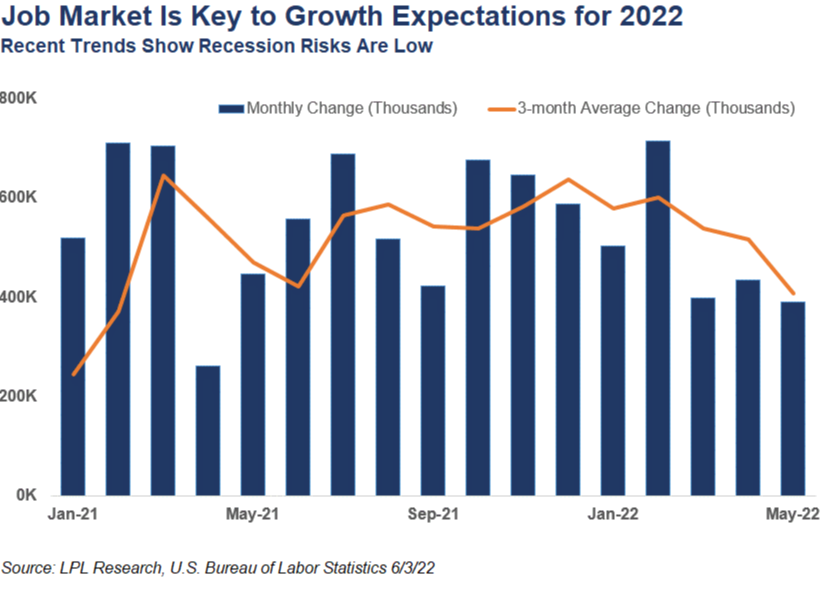 So, what am I getting at? I believe that the majority of the market declines have been seen and felt. We have hit previous decline points in many different measures, which I have addressed in the last couple of notes. The only real measure that hasn't been met is one of time duration of decline. "Usually" declines of any serious magnitude last for a longer period, and "usually" Midterm years don't usually bottom until later in the year. If we are to look at the table below, going back to 1950 it can be seen what each Midyear indigestion has done and when it tends to hit this low. A May low would still be on the early side of the average low. Looking at the chart, only two have seen their yearly low before May 19th, when the S&P 500 made its closing low a few weeks ago. As I had said, the depth of this year's correction is almost exactly in line with the average Midterm pullback. But regardless of "when" the low is put in, the ensuing bounce back is something surely you don't want to miss. 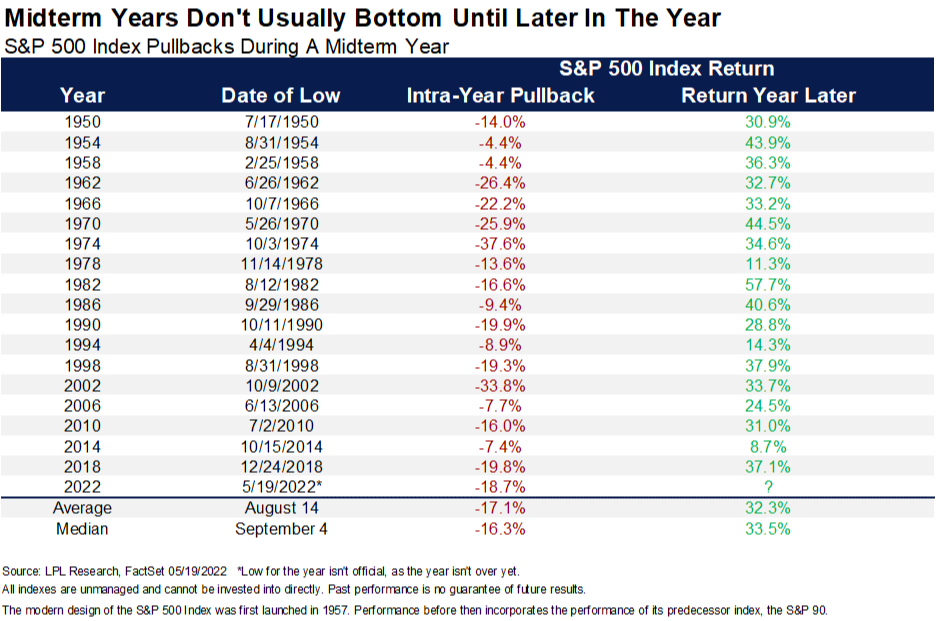 What I look at every day and print a hard copy of every week is the chart of the yield on the 10-Year US Treasury and the US Dollar Index (see chart below). If the economy is strong then rates go up as the cost of money is increased to make it more expensive to buy homes and large durable items. When the 10-Year begins declining after a substantial run higher, it tends to signify that rates have moved high enough to slow down the economy enough to put inflation in check. To validate this move in interest rates I then look to see what the US Dollar is doing. If rates are rising, the US Dollar rises because foreign currency comes flooding into our financial markets to take advantage of higher interest rates here than at home and to take advantage of the positive currency exchange that they should experience when they move back into their domestic currencies. To show you a picture of what I am now seeing, and give a less verbal and more visual explanation of the slowdown that seems to be started, below are a number of pictures of changes I am noticing that seem to be confirming each other:

The 10-Year US Treasury yield. It topped out (not coincidentally) when the S&P 500 bottomed a few weeks ago with a print at 3.1%

The US Dollar, which has been on a very strong uptrend (compared to questionable stability across the world) confirmed and correlated to the move in the 10-Year yield and then pulled back, seemingly confirming the rolling over of yields.

Going overseas and measuring the second largest economy in the world, China, it is clear that due to the shutdowns of their major industrial cities and their supply chains, the move of goods and services is continuing to be challenged. As can be seen, the GDP of China is now below its desired expansion rate and should clearly add to global slowdowns and therefore pressure on inflation once food, oil, and gas are normalized and the excess free money in the US financial system is burned off. 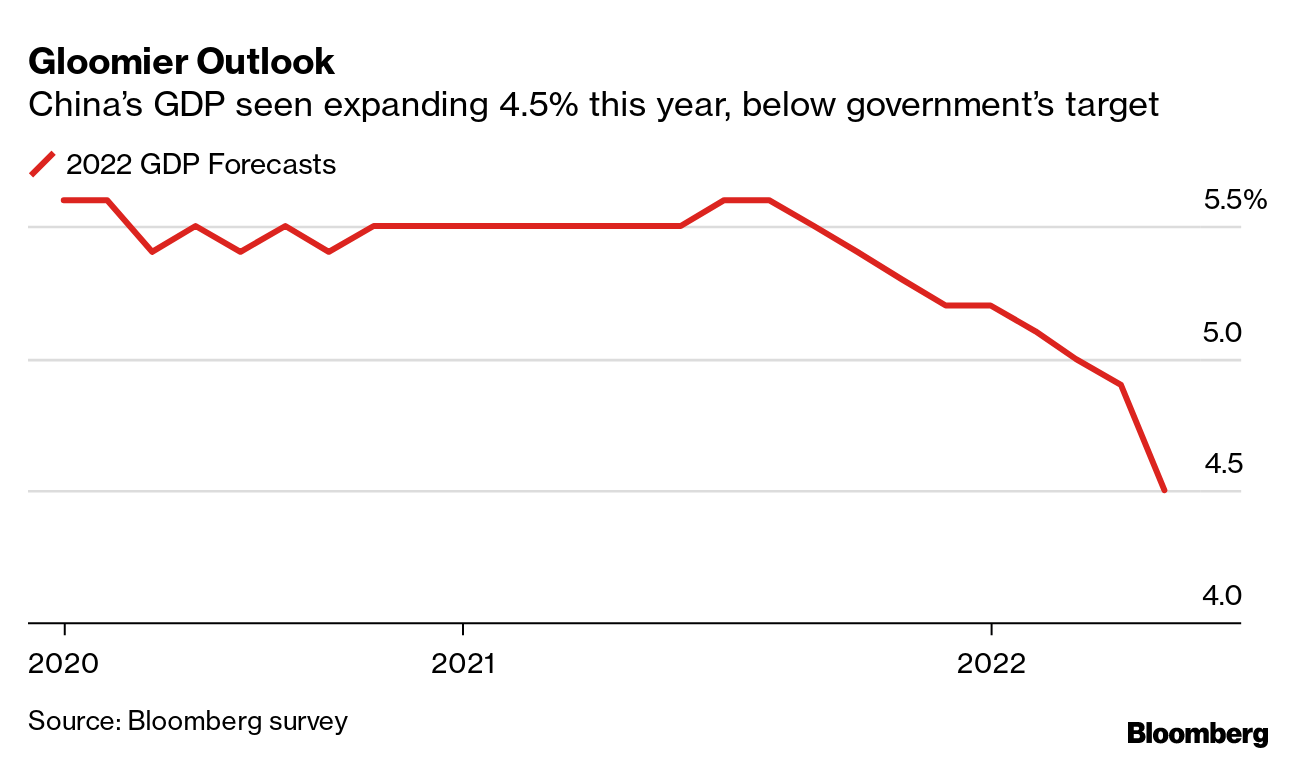 The largest industry in the US is the homebuilding industry. Unless you have been totally tuned out, it’s been almost impossible to not marvel at the crazy spike in real estate prices over the last year or so. Yet even this is beginning to show signs of being tired. I was able to actually get figures of Los Angeles, Orange County, Inland Empire, and San Diego for proper analysis of our local markets. 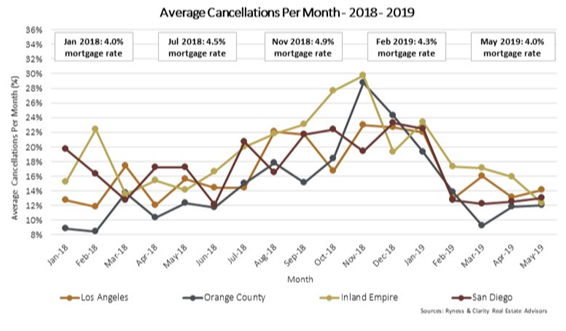 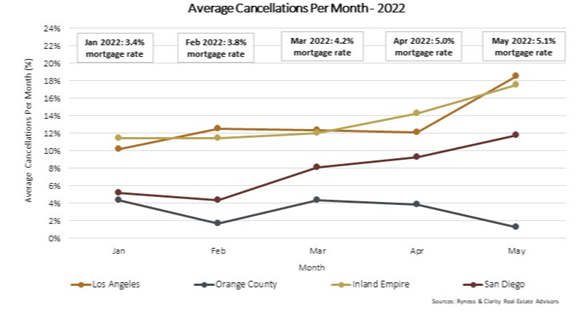 The last point on the slowdown that seems to be starting is the measure of debt and savings of the US consumer. Revolving debt (credit card) levels are at all-time highs, doubling expectations in April and May, and climbing 21% YoY. As the May Personal Income and Spending report showed this week, the savings rate continues its crash as savings are massively negative the past year - a report issued last week shows the majority of households making $236,000 or less living paycheck to paycheck (the income number was not a typo!). Indeed, savings climbed some in early 2021 but crashed from roughly 27% to around 6% the past year as spiraling prices force consumers to spend more than they save, financing the difference through credit cards. Several reports of various measures show US citizens are experiencing extreme stress as a result of their finances given surging energy costs, surging inflation, lower real wages, and worries regarding the economy in the future. Biden blamed higher prices on the scapegoat of late, Putin: "This is the Putin price hike." Sure, prices have continued higher since Russia invaded Ukraine, but prices were already soaring before: 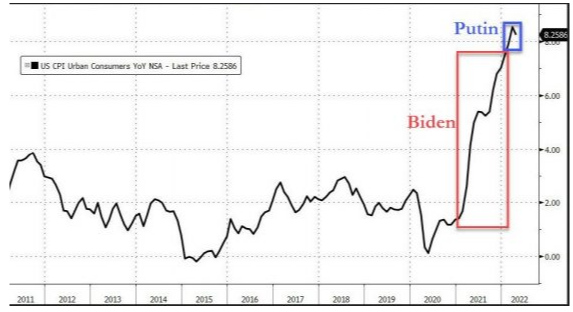 The American Psychological Association in its May survey cited the above issues for their high stress levels. The Gallup Economic Confidence Index shows economic confidence at its lowest since 2009! ISM Services, May: 55.9% vs. 56.6% with expectation at 57.1% prior. Not in contraction, but sliding lower, the weakest report since May of 2020 at the depths of COVID. And then there is food and fertilizer. We are hearing reports from various regions that the fertilizer for sale is about to run out. Whatever the sellers have in stock is all there is, and many are starting to run out. All of this while Biden announced last weekend that he is officially increasing the amount of ethanol as a percentage of gasoline at the pump, what is ethanol made from? Corn! And what is needed to grow more corn? Fertilizer! And what is fertilizer made from? Nitrogen. And where is nitrogen generated from? Natural gas! And what is at almost all-time highs in the price? Natural gas! Are you seeing the terrible political conundrum we are faced with?

In the end, our economy is starting to price in doing almost everything at home, or at least using labor away from China - which has held us hostage. We are moving to more of a self-sustaining environment where we grow it, make it, and sell it domestically if possible. Even corporations are talking of deglobalization. Call it "nearshoring" or "onshoring” or as it may be "reshoring." This isn't necessarily a bad thing, but clearly, something that has been fast-forwarded by the Russia/Ukraine conflict and the China supply chain shut down. 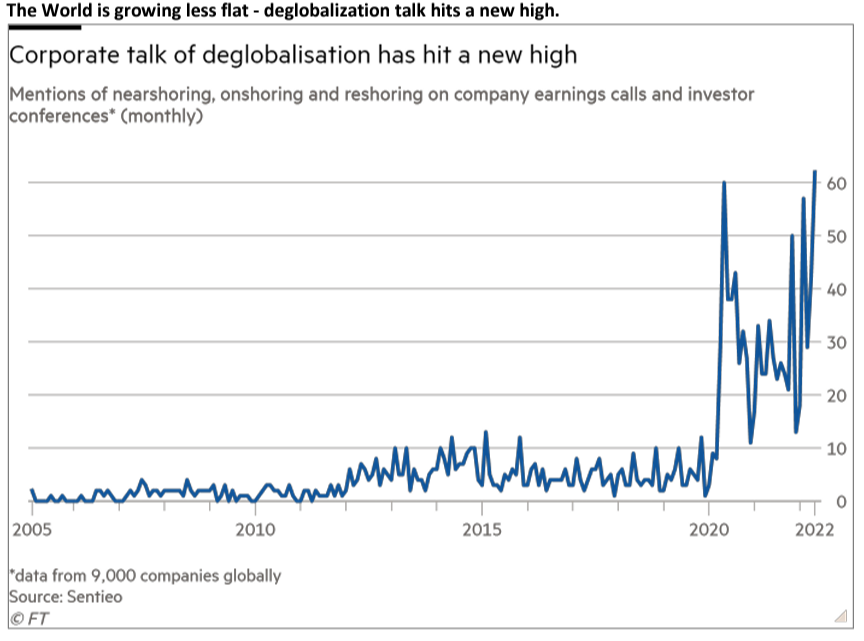 In closing, the last time interest rates spiked was in 2018 when mortgage rates rose a full point in under a year. This year they've almost doubled that increase in the first 5 months of the year. This, on top of gasoline, food, and negative real wage growth has provided the fuel to the Stock Market to bring valuations back to the normalized 16.5 P/E that I explained last week. The amount of the decline seems to be consistent with most Midterm election year declines, and since social media is what it has become, time periods have been compressed. But according to Jeffrey Saut of Saut Research and Bespoke Media, the markets appear to have put in a durable low in May and while not completely ready to make moves back to old highs (particularly with two more 50 basis point rate hikes on the immediate horizon) we could be putting in a based that could provide a good backdrop for the continuation of the Bull Market we have been experiencing since 2009. This week it appears that China is fully reopened and imagine what could happen if there were some kind of a cease-fire in Ukraine. I'm not looking for Santa to come in the middle of the summer, but I don't think that the Grinch has a lot of energy left either!

It's now officially summer. The sun is out, the ocean is warming up and I can't wait for the south swells to begin. Enjoy the next couple of weeks before my favorite holiday, July 4th. And as always, don't hesitate to let us know if you have any questions.