Not Everyone Should Be a Turkey

Today’s report will be a little different than usual. There once again isn’t much new to say about the short-term setup in the market, so while I will discuss that a little, the main emphasis will be on the bigger picture and some of my general thoughts about where we may go from here. As always, my views are not set in stone and will be subject to change with the market, but I want to at least provide somewhat of a roadmap for how I’m currently positioning portfolios. It is clear the markets are at new highs: check ✅. It is clear that inflation is on the rise in many different places: check ✅. It is clear that third-quarter earnings and revenues—as well as future guidance—are coming in higher than was initially expected in many cases: check ✅. But IT ISN'T THIS EASY. THAT WAS THEN AND THIS IS NOW!!!!!

First, though, the general stock market in the near term continues to churn around all-time highs. In my view, this is a good thing and is likely setting us up for another push higher. Seasonally this is true, but this market can be tricky, and possibly just what we are hopefully expecting could end up being "different this time." The only real question I have is whether we get one more small wave down first or if a couple of weeks of choppy trading has been enough to recharge stocks. Please reference the chart in last week’s letter for a very clear picture of this. 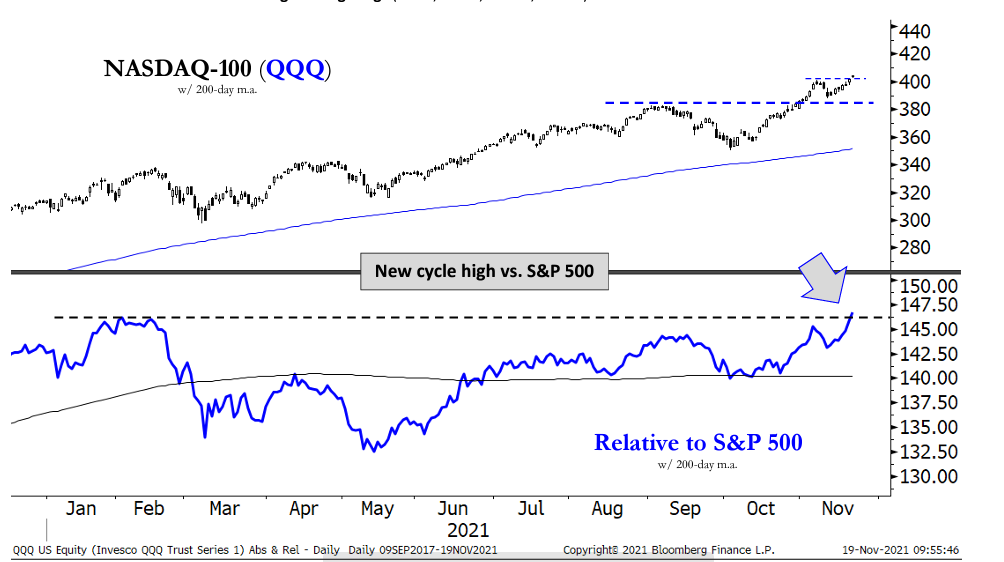 I honestly don’t have a lot of conviction either way right now because I don’t think the market is sending us strong signals. As I said in the first paragraph above, we are at high levels of good data. As I write this around midday Saturday, the S&P 500 is up around 0.5%, but there are currently more declining stocks than advancing (by a small margin). Over the past several sessions, the percentage of advancing stocks on the NYSE has been as follows: 52%, 50%, 36%, 61%, 55%, 49%,46%. Not bad, but not strengthening either and not really indicative of major selling or strong buying. Unless the latter arrives, we’ll be at risk of some more down days that can push the indices marginally lower. However, I believe in the immediate term the S&P 500 is likely to stay above 4550-4600 and Small-Cap Value and Large-Cap Growth are likely to stay in their respective higher ranges, with hopefully limited downside. In general, I continue to proceed as if we will go higher in the coming weeks even if it’s not a straight path higher.

For those of you who have read my reports for a while, hopefully you know I am not one to sensationalize or promote fear for the sake of it. So, when I write about something like this, it’s because I think it’s something we need to at least keep in the back of our minds as we go forward. I don’t think the next bear market is coming soon, but when it does I think it has the possibility of being painful. The other part of this is that we are now 12-13 years removed from the Global Financial Crisis and 20 months from the COVID crash lows. There aren’t many areas of the market that appear to be at an extreme value standpoint while many are at or near historical peaks in valuation; so, we need to put more emphasis on making sure we’re in the right groups and limiting risk in groups that could stage a big fall if conditions change. Over the short term, what looks attractive changes frequently and I try not to be myopic and highlight those opportunities in these reports. However, when we’re talking about bigger picture investments, I increasingly want exposure to “real stuff" and stocks that are in the way of where the world's consumption appears to be going. By “real stuff,” I mean the things that people and companies need even if prices continue to rise: Energy, Food, Housing, Natural Resources, etc. Stuff like this.

Again, this is speaking more toward the bigger picture over the next few years. In the interim, I do think stocks as an asset class go higher and maybe even much higher. The massive amounts of liquidity and stimulus can kick the can pretty far down the road, but I do think we will eventually see a day of reckoning, and I know I want to be on the right side of that when it comes. This is why I think it’ll be crucial for us to honor and respect major support zones and get extra cautious should they break. The crowd can also get pretty crazy near the end of bull markets, so we also need to watch sentiment carefully and try to avoid areas that look particularly “bubbly” and overly concentrated. Anyone can make money in the market; keeping it is another matter. The renaming of Staples Center in Los Angeles begins to smell like a "bubbly" sort of situation.

Bottom Line: I don’t have much to say here that I didn’t say above or over the last couple of weeks. In the near term, I don’t have a strong conviction on where the markets should go immediately, but I still believe any dips will be shallow, and stocks probably rise in the weeks ahead. That’s what "should happen," so it will be a sign I need to re-evaluate if it does not. But the trend remains up, monetary and fiscal policies remain accommodative, and it’s been a successful earnings season so far with most S&P 500 companies having now reported and 81% beating EPS estimates. If we are going to get a surprise move from here, it feels like it’s likely to come on the upside, so I don’t think we should get too cute with trying to time it perfectly. Those long-term resistance levels in the S&P 500 and NASDAQ remain in place and are the biggest technical hurdles to overcome, but there is no rule to say that they can’t be overcome.

I wish you all a very Happy Thanksgiving with friends, family, and NO MASKS. Please, as always, feel free to call should any questions arise about your personal portfolios or if your investment goals have changed.