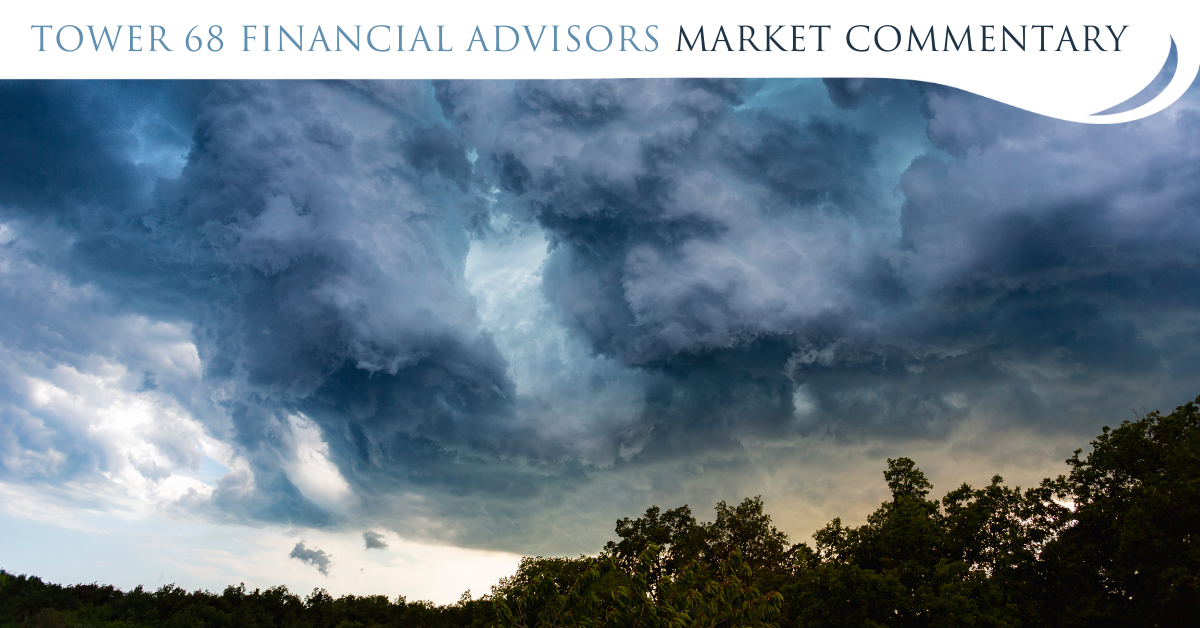 Plan for the Week

In this week’s letter, I believe that we have enough meat on the bone to address a few of the different issues that have been plaguing markets and set up a road map for an investor going forward. I want to first break down what has been important, second how these issues integrate with each other in directing markets and lastly give some input on what we are experiencing at this moment and what we could possibly expect going forward.

To begin with, we have an extremely frictional and different set of circumstances in place with our domestic economy and the international economy. We are forced to deal with these frictional issues in the normal course of our lives as well as in our investments. These are the most critical negative issues we are dealing with:

When prices go up along with inflation at the production level, it tends to have a negative effect on general equity prices. Why? Because the cost to run a business is increased yet when there isn’t an equal or rising level of the economy to go along with it, there is a negative growth rate on revenues and earnings. So, we have the Fed raising rates (increasing cost to do everything), inflation due to the above-mentioned international issues plus increased demand due to the golf ball in the snake mentioned above, and higher prices without higher profits ensue. The net result is a general market pullback.

Now we get to the interesting part, how much of a pullback? I will answer this in several different points below.

The Fear & Greed Index puts this market at a point of extreme fear. Virtually every measure available, measured against previous declines- going back to the 1950s tells us we are pretty darn washed out. 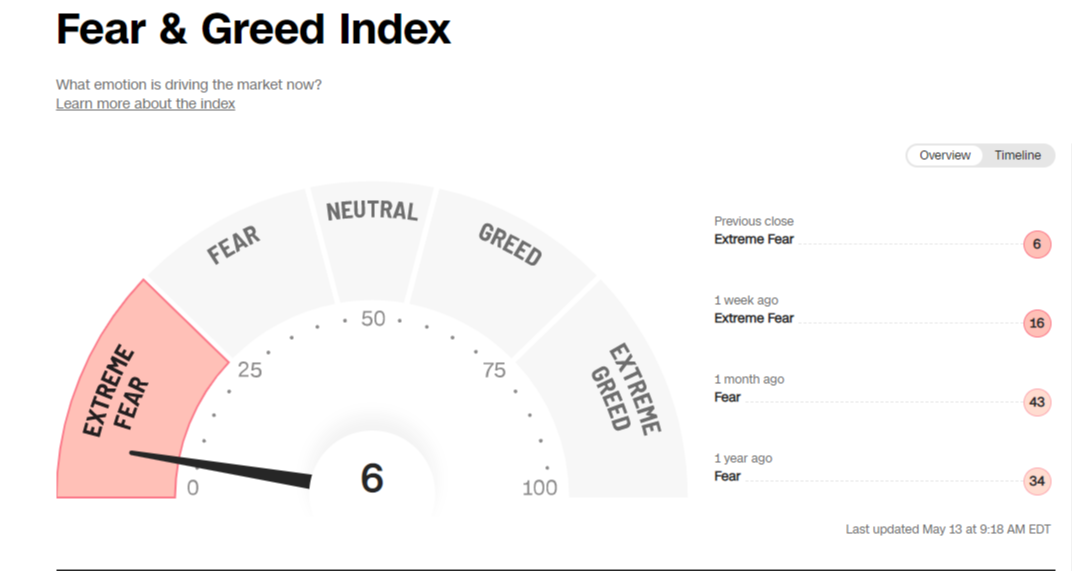 My own indicator that I update daily shows much the same. The pink line is the S&P 500, and the blue line is my indicator. The squiggly red lines I point out the lows in my cumulative number which in every case marks the low points in the S&P 500. As can be seen in the lower right, my blue line has reached a point where it seldom goes and does not stay for very long, ever, since I began recording my data back in 2003. 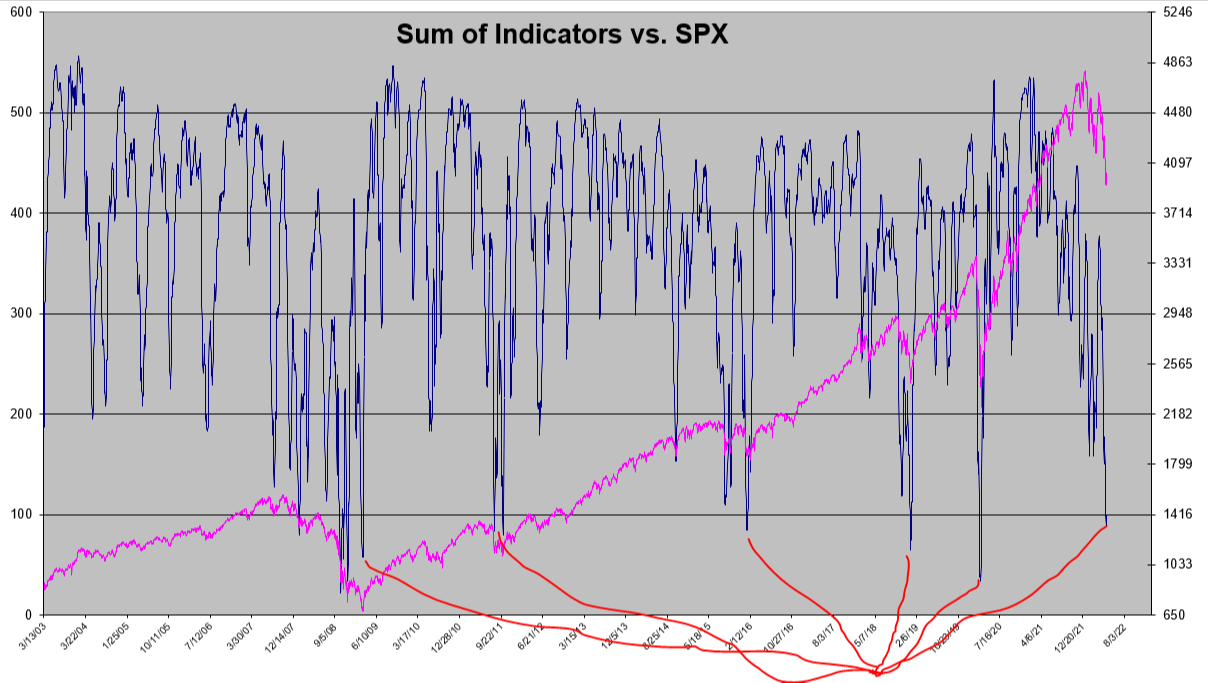 How exactly have earnings been in the most recent reporting season? Although this is backward-looking, it also reflects what companies are telling the public about their future expectations. And these are still positive numbers. This would tend to infer that yes, we have been digesting, but that the positive direction of the US economy is still in place. 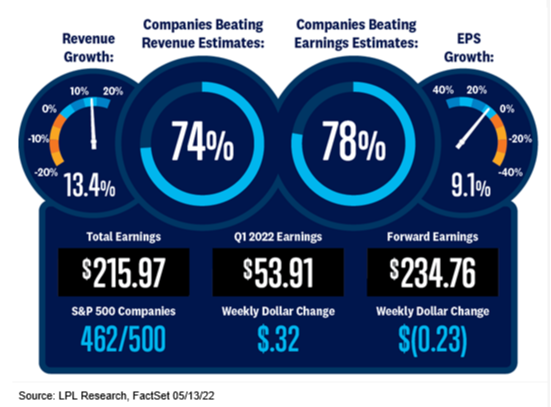 The next point is how far we have come down relative to where we started. As all can recall, the last major decline that was experienced was in March of 2020 in the throes of the COVID epidemic. We rallied out of that chasm and went to a new high at the beginning of this year. Since then, we have experienced a give-back, of quite painful proportions, yet still a normal Fibonacci, 38.2% pullback. Again, THIS IS A NORMAL PULLBACK.

As an aside, I welcome you, for educational and entertainment value to look up the mathematician Fibonacci, and his “Golden Ratio.” It is astounding how repetitive this has been in nature, business, and life.

One of my favorite people, Karen Talbot, brought this to my attention last week and I certainly hope you enjoy it as much as I did.

So, if this is all true and measurable above, what happens next? Going back to 1980, as can be seen below, after a decline, consistent with what we have experienced, the returns on the S&P 500 have been really quite impressive. 90.3% of the time the market was higher a year later and two years later much higher as well. As rough a year as this year has been, how does this correction stack up with other corrections? Currently, the S&P 500 is down approx. 18% from the January 2 peak and it has been 128 days. Looking at all the corrections below, the average one ends at about 88 days, so this correction is getting long in the tooth and could be nearing its conclusion. Additionally, the good news is a year off the correction lows, stocks were higher 22 out of 24 times. 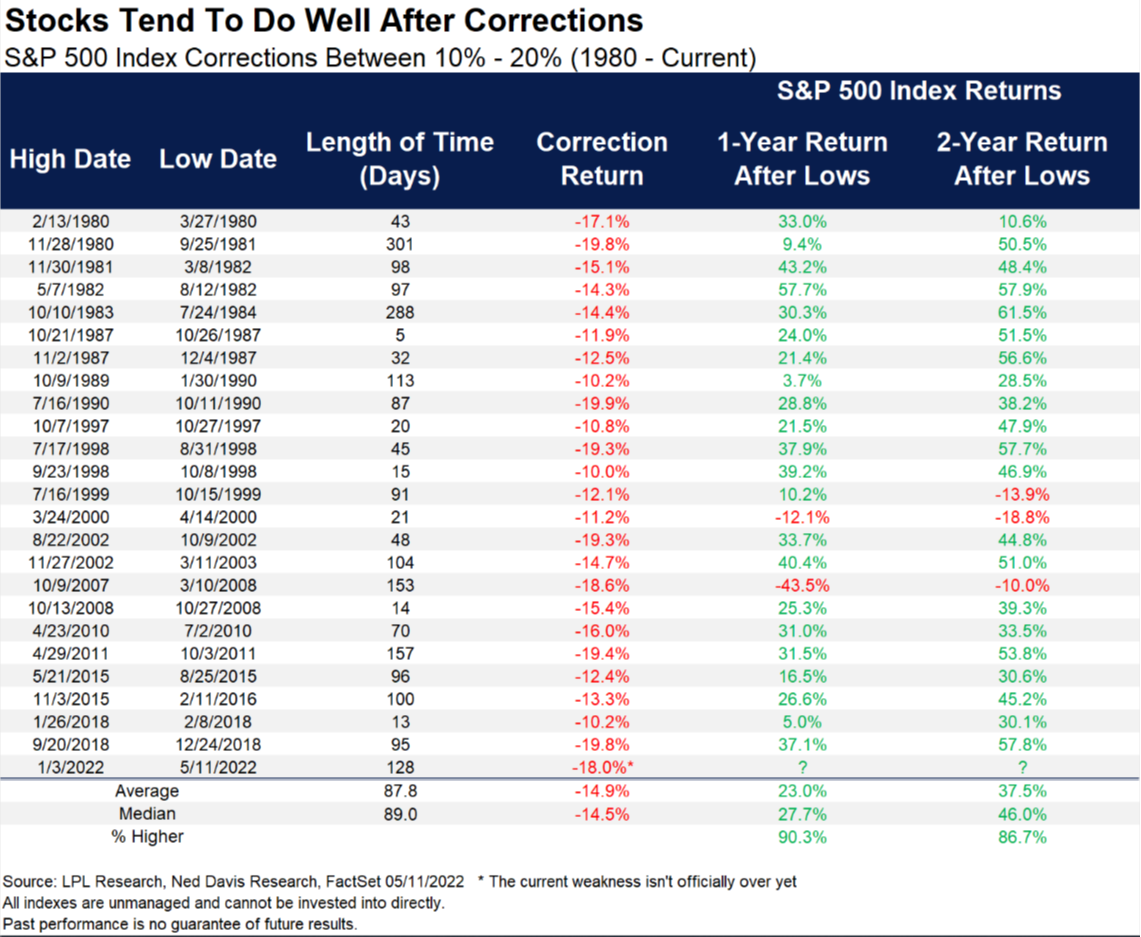 To leave you with just a few more points that I found important were as follows: In the month of March, 28% of all home buyers paid all cash for their homes. And in looking at debt in general, debt service costs remain low for both consumers and US companies. As of the fourth quarter, consumers needed to use only 14% of their after-tax incomes to meet their financial obligations, which are debt service payments plus rents and payments for car leases and similar costs. That is the lowest percentage going back to 1980.

In conclusion, in “The Economy” section of Barron’s this past weekend the title was, “Fed Hawkishness May Be Near Its Peak, even if Inflation Isn’t.” I don’t think that a faster hiking cycle would help much. The inflationary forces we have today are from injections of money that came into the economy in the 18 months after the pandemic and that cash in the system is fueling spending and creating excess demand for goods and services that is driving prices higher. It is positive the Fed is hiking rates to slow down future inflationary pressures, but a faster cycle would not accomplish much at this juncture, particularly when there is such major supply-constrained happening at exactly the same time. Our first-quarter GDP was -1.4%. China announced Sunday evening that its industrial output for April was -2.9%, its biggest drop on record. Their retail sales -11.1% and their unemployment rate rose. This doesn’t even take into account what May will most definitely show!

Our economy expanded, we are afraid it expanded too much, and we are putting this in check. In turn, the prices of all assets suffer some level of pullback. The pullback seems normal. Looking under the hood of the economy we are still quite healthy. As for the international, well, that is really quite a different story, but hopefully it doesn’t spill over too much into our domestic economy. And all of this during a mid-term presidential year. All in all, not a great combination. So, pick quality, stay with quality, and live your life conservatively with great family values. And buy your sunscreen now, as the summer sun is just around the corner.