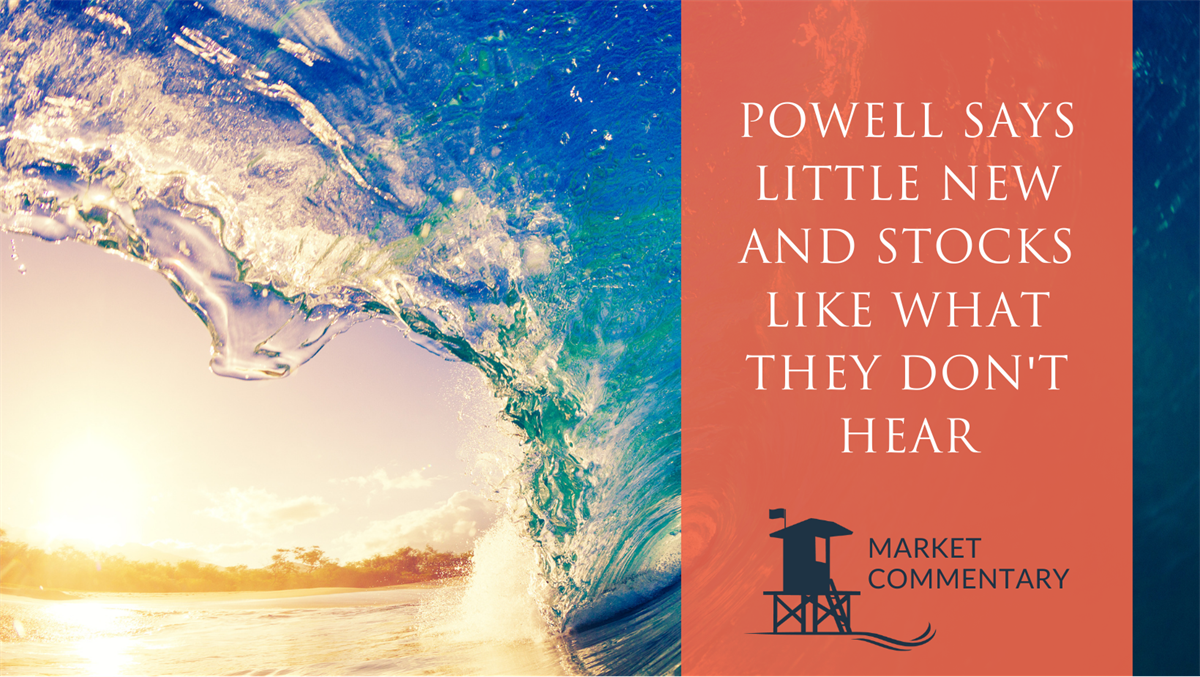 Powell Says Little New and Stocks Like What They Don't Hear

I plan on talking a bit about where the markets are as they seem to continue to go to all-time highs: the S&P 500, Dow Jones Industrial Average, New York Stock Exchange, and the NASDAQ Growth Index. Yet the negativity and all-prevailing belief that it cannot continue seem to be the drumbeat day in and day out. If we harken back to 2 years ago, stocks fell nearly 20% after the Fed declared the economy in excellent shape. They took up interest rates and started to sell bonds (exactly the opposite of the bond-buying program that the Fed has been doing). They were on a path to tighten monetary conditions, overlooking signs of weakness in the economy. Purchasing managers loaded up on Chinese goods before tariffs were put in place. When inventories were adequate, they stopped ordering. It was apparent to many on Wall Street that the economy was slowing. In late 2019, these same Wall Street people told the Fed that they had the wrong strategy. Powell saved us by reversing those efforts and started what would become a huge injection of Quantitative Easing. The Fed has got it wrong again, but Powell seems to be talking them back off their rate-raising pulpit. They want to tighten slowly in a way that doesn't affect the economy. They keep saying that the economy is strong enough to handle it. They then rolled out a variety of Fed presidents to suggest a timetable to reduce the bond-buying, sometime in the fall. I get what they are trying to do—tell the world that they are not going to perpetuate the sugar-high forever, but the idea seems to be falling on its face. I mean Earth to the Fed; the economy is getting ready to roll over again. In the August 24th Wall Street Journal, an article started with, "US expansion slows down as demand cools." The monthly survey of Purchasing Managers Index fell in manufacturing and services, partly due to supply shortages. Retail sales were lower than expected. The numbers reflect concern over the Delta Variant. Activities have been canceled, and corporations are beginning to tell employees to stay home again.

It's Not What You Say, It's How You Say It

Fed Chairman Powell artistically walked a tightrope on Friday by delivering a masterful message that was received loud and clear by everyone. How do I know this? Because on Thursday, the US stock market got kicked in the shins pretty hard and all the Boo Birds came out saying things like, "here it is, the August sell-off is now beginning and it should last into September." What I saw was simply a low volume sell-off without buyers willing to step up to the plate before Powell gave his important speech at Jackson Hole. We all know that the economy is acting a bit better, yet it is clearly not ready to be off the financial resuscitator. So, after a sharp decline on Thursday, following the previous week that was really quite messy as well, here comes Powell and his reassurance that inflation is "transitory" and that they will certainly wind down their bond-buying by year-end, but made it very clear that they were in absolutely no hurry to raise short-term interest rates from the current near-zero rates. He said specifically, "the timing and pace of the coming reduction in asset purchases will not be intended to carry a direct signal regarding the timing of interest-rate liftoff, for which we have articulated a different and substantially more stringent test."

Cliff Hodge, chief investment officer for Cornerstone Wealth, called the speech "uber-bullish" for stocks. Jim Paulsen, Chief Investment Strategist at the Leuthold Group, says the Powell speech and the potential peaking in US COVID infections in the coming weeks could lead to a second "reopening" trade, as investors again favor small-cap and economically sensitive stocks. So along comes Friday and BOOM!—the market rockets.

According to Andrew Adams, strategist at Saut Research, after Thursday's disappointing 80% down day, Friday was unequivocally strong. The overall action of the week, last week, was enough to flip the NYSE and NASDAQ McClellan Summation Index back to positive and despite Thursday's flop, the "balance of evidence" for the general market improved. Perhaps more notably though, Friday saw both the S&P 500 (broad big-cap market) and the Russell 2000 (index of small-cap economically sensitive companies) finish above short-term resistance that has been in place for a number of weeks.

So, the divergence that has been in place for the last few months has come to an end. When I say divergence, what I mean is that the markets keep gurgling to new highs, yet the number of companies that are pulling it up there has been declining. This was virtually blown out of the water on Friday when we experienced an almost undeniable 90% up day. A 90% up day is when over 90% of companies are higher, with over 90% showing above-average volume, and over 90% of the volume was up volume vs. down volume—it is a super strong phenomenon. So, this is all well and good, but let's take a step back and refute what some of the Boo Birds have been saying about the NASDAQ and big-cap technology specifically that seems to go to new highs on an almost weekly basis. The last time that the NASDAQ was super strong like this was actually back in the Dot Com boom in late 1999. The similarity in price action between the recovery from 1991 after the downturn in the economy, the housing crisis, and the Savings and loan / Banking crisis with what we saw from 2009 after the great financial crisis is truly amazing. However, it may surprise you to know that this bull market has been slower in time and lesser in magnitude (so far) than seen in the prior cycle.

If we were to continue to follow this rate of relative change, the suggestion would be that we would get to 15.9 times (just above 20,000 on the index) by March or April of 2022 (about 33% higher over 8 months which is large, but by no means impossible). Yet, if one were to overlay the chart of today on top of the chart of the ‘90s, it would suggest that we could see a much higher move between now and then!!!! This would be a close-up around 28,000 or 85% above where it is now. I am very confident that this IS NOT GOING TO HAPPEN, AT LEAST IN THIS TIME FRAME, but the economic backdrop of low interest rates, tons of cash on the sidelines, and a lean and mean economy with voracious and unmet demand for intermediary goods could very well provide a backdrop for a continued strong market.

In closing, we really need to wrap our brains around the fact that this strength that we are experiencing in the NASDAQ is not like the Dot Com boom or Y2K, but rather simply a rush to higher efficiency, artificial intelligence, and a streamlining of the production and distribution chain. But more importantly, COVID has completely changed the picture for many years to come with regards to the importance of a strong technology platform, and that is likely to only further strengthen the appeal of the sector. So, in the long run, no I don't expect a massive move in the next 6-8 months, but over a longer cycle, these lofty levels are really not out of the question. Couple that with the fact that we are in a zero-interest rate environment where the prevalence of debt at virtually zero cost makes business opportunities far more profitable. As I tried to make clear above, THIS FED KNOWS WHAT DIDN'T WORK THE LAST TIME, AND ACTUALLY CREATED A DEVASTATING DECLINE. What I keep paying attention to, as I've often stated for the last couple of years, is the dollar. If the dollar were to decline due to global concern about the US economy and the amount of money flooding our system being a problem, then I think that the environment must be reevaluated. But, if the dollar stays constant on an exchange basis, the interest rates stay relatively benign, and the productivity that is continuously enhanced by more advanced technology continues across both the supply chain and the distribution channels, I believe we should continue to prosper, as a country, as business owners and ultimately as individual investors. Stay tuned!!!