"Critical Thinking is the desire to seek patience, to doubt fondness, to meditate slowness, to assert readiness, to consider carefulness, to dispose and set in order and hatred of every kind of imposter"
— Francis Bacon, 1605

Sometimes the noise around us takes our focus away from what we should be paying attention to. At present we have Virus, Vaccine, massive new financing packages, and many others so uncommon that we are having trouble focusing on what is really going on. At times like this, I like to draw upon history and philosophy when my thoughts seem to become somewhat clouded. I also try to pay attention to signs that seem to be randomly provided. Often these are great indicators that can shock me into thinking clearly. Well, last week I was at dinner with a great and smart lady who brought out this quote and gave it to me. What amazed me is how accurate it is, particularly when written back in 1605. Currently, we are faced with a variety of issues in the financial markets that just don't seem to correlate. To me, this tells me to pay attention to the numbers, the facts, the indisputable measurements that proper analysis should be built on. I found it really quite interesting that the Michigan Consumer Sentiment Index tanked again to long-term lows. The November reading was an 11-year low for confidence. The survey director tags "escalating inflation rate and the growing belief among consumers that no effective policies have yet been developed to reduce the damage from surging inflation." Indeed, short-term inflation expectations jumped to a new cycle high and the highest since 2008. Thus, the paradox of the stock market moving to new highs versus the 'average Joe's' confidence diving to new lows. Buying conditions fell to multi-decade lows. Shockingly, households expecting to be worse off rose to 24%, the highest since 2008. It makes one question who is benefiting from the current economic environment. And in the face of all this, we are experiencing broad and expanding new highs in market indexes. What gives??

This brings me back to the title of this week's note; the fact that real earnings show that the gains in wages are being gobbled up by the inflation of prices. The term used for this is "real wages," and they seem to be falling based on price increases rising faster than the wages themselves. Food and energy inflation is +9.7% for 2021 so far. Earnings have risen, as well, but only 4.9% year over year. The rub? Wages are up, but as the inflation data shows, the real positive effect of these higher wages is actually lower. Consumer confidence is being eroded by this, but also by the comments out of the Biden administration. Shortly after the strongest inflation surge since 1990, Biden addressed the issue, noting that most of the price increase is due to rising energy costs. He vowed to endeavor to persevere, directing his National Economic Council to pursue means to try to further reduce these costs. He also asked the Federal Trade Commission to strike back at any market manipulation of price gouging in the energy sector. Now, I find this really quite puzzling. If you shut down pipelines, curb oil production, put constraints on the industry, and take the US from being a net exporter of energy and the world's lowest-cost producer of natural gas and turn us into a once again dependent nation on Mid-East petroleum supplies, how could this be a good thing?

On top of this, what Biden did not tell anyone is that the new bill just passed incorporates a 30% tax on natural gas. So much for Biden's promise not to raise taxes on those making less than $400K. Biden says he wants to bring energy costs lower, but he championed a bill that raises energy costs by a huge amount. Energy prices have doubled in less than 10 months in office. And he thinks spending trillions more on his globalist BBB plan will bring prices in energy and other areas down? This is one of many head-scratchers I'm noticing that make me reflect on the first sentence of the Francis Bacon quote above from 1605!

All of this being said, it again makes me focus on the markets and wonder what is driving the current progression. To my analysis, the amount of money in the system and the unabated consumption is overriding all of the above-mentioned negativities. Also, it is clear that in the absence of another major breakout of the Virus, which could force another lockdown of the economy, we seem to be poised for further expansion and the infrastructure bill could be just the kind of expansion to show a sticky and longer-lasting recovery. This recovery is feared to be overly inflationary, but thus far many measures appear to be high, but acceptable.

Again, and I know I seem like a broken record in mentioning this most every week, I want to focus on the US Greenback. As noticed in the chart below, and NOT MENTIONED ANYWHERE IN THE PRESS, the Eurozone, the Japanese, and quite possibly the Chinese have stepped up their piling into the US Dollar due to their own internal problems. Negative rates persist in many major countries and our higher rates inflict pain on their currencies as major blocks of capital come rushing into the US Dollar to own the appreciating currency and earn a higher rate of interest in sovereign government debt. Take a minute to really ponder this last statement. If you are a German, and your rates are still negative, and you bring your money over here and invest in 10-year US Treasuries, in one year the US Dollar vs the Euro appreciates 5% and your yield on the 10-year is 1.5%, you’ve made 6.5% on your money in the safest instrument on the planet. Not bad! The trade-off to the US economy is the negative pricing on US exports as they become more expensive as the US Dollar strengthens, but this is a whole other discussion! Suffice it to say that the US Dollar appears to be telling us that we are expanding, and the rest of the world is HOPING to expand as a result of our consumption of their goods. 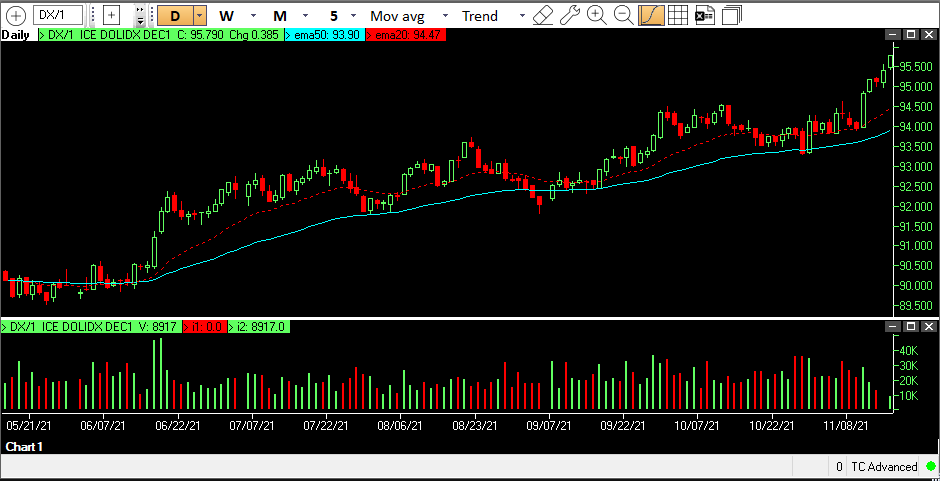 One of the more statistical measures that I follow is the NASDAQ McClellan Summation Index (NASI). This Index has largely been under pressure since earlier this year. It recently turned positive (greater than the zero mark) for the first time since July, and according to SentimenTrader's study, that has been a good sign for the bigger picture historically. There are only 8 prior times when the NASI has crossed over 0 for the first time in more than 3 months while the NASDAQ Composite was at a 3-year high, but the NASDAQ was positive every time a year later for a median gain of 21.5%. This again is another measure that seems to support the current, continued market strength. Clearly, this is a very statistical measure, but when one is so consistent, I feel it should be remembered.

Another measure I am seeing is the Lowry research report. At the end of last week, Lowry stated that the positive change in market tone so far in early November culminated in price breakouts by mid-cap and small-cap stocks. For the small-caps, it was the first new high since June 8th of this year. And for the mid-caps, it has been since September 2nd. These months of sideways trading and underperformance for both were finally resolved. They went on to show that as strong stocks get stronger, there is now evidence that weaker stocks are also improving. In the final analysis, these next two weeks of November tend to be a little difficult for the markets, but it would seem to be a logical breather for the markets before the final push of strength into the end of the year. 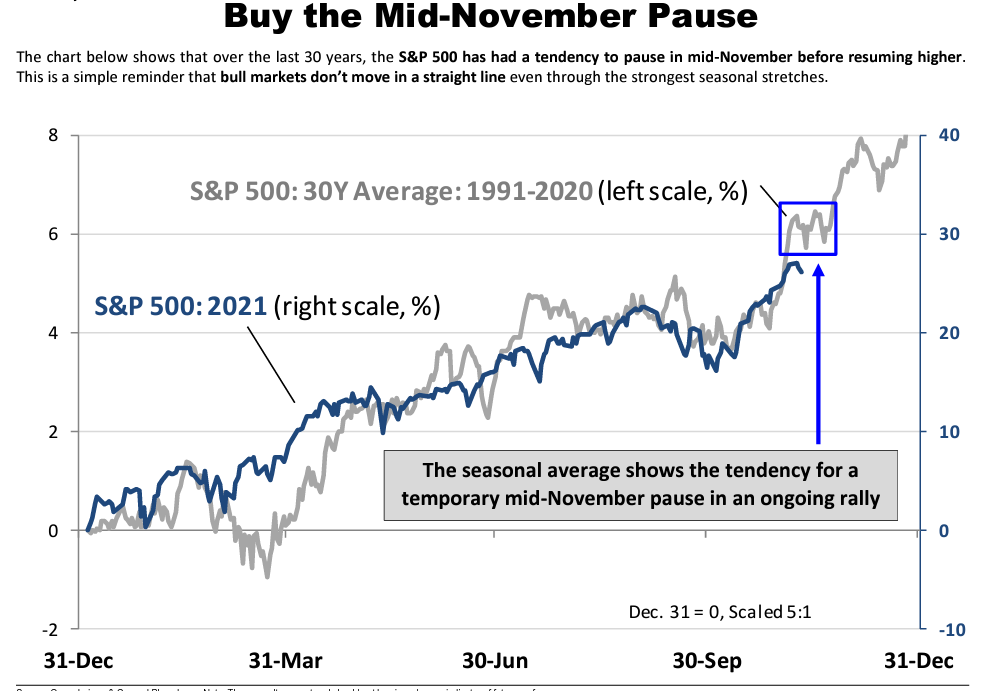 We can focus on the negativity of labor, but as we look under the hood it is clear that we are experiencing a period that is really quite an anomaly where unemployment seems to remain an issue, not due to a lack of jobs, but instead due to a large increase in people who have decided to simply not re-engage in the workforce. I guess if given free money long enough, enough is saved that they don't even want to go back to work. Stranger things have happened, for this I am sure, but this is a truly different situation than I can ever recall experiencing. So, it brings me to do what seems to be the best decision: LISTEN TO THE MONEY, IT SELDOM LIES!