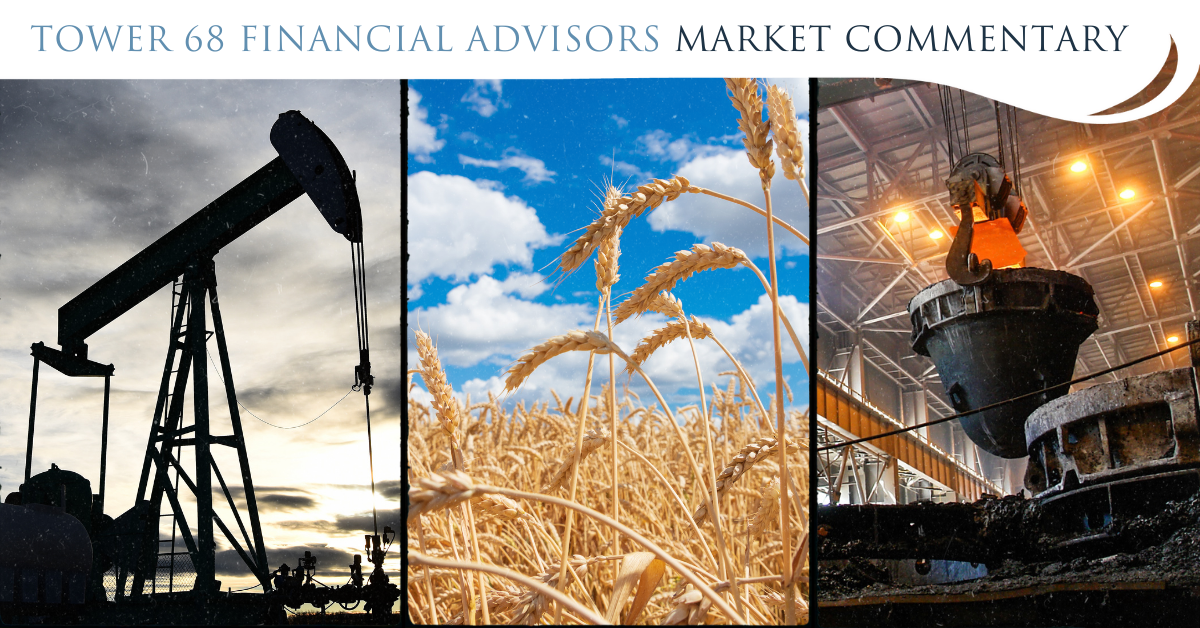 To say that this has been a difficult and different start to a year is a gross understatement. At the end of last week, we started getting the parade of earnings for the first quarter of 2022—beginning with the large money center banks, regional banks, and investment banks. It appears that almost across the board the numbers are coming in better than expected. Even still, the financial sector and the financial technology companies are still in a significant decline. Is this due to credit quality, loan losses, excess fixed expenses, or a lack of spread in their interest margins? I really don't think it is any of these given that they have been having a difficult time of it for some time now. I believe it is more a function of a complete change in the future of money transfers and the rapid increase in blockchain and cryptocurrency. I believe that the way money is transferred from institution to institution or from the consumer to the retailer has for too long been held hostage by the major institutions and credit card companies. What happens when money simply moves pier to pier without ever having to go through a typical financial institution? Well, for one, the financial institutions can't charge any longer for the transaction. Also, the risk of loss is minimized because it is an immediate encrypted action between two parties that should with today's technologies occur in an instant. Will there still be a need for banks and the activities of lending and credit that they provide? Of course, yet, many day-to-day activities will be done virtually without any need for typical "old school" governance. Stay tuned! This is a huge subject that is still unfolding.

Today, I'd like to cover the issue of the conflict between Russia and Ukraine. It seems to me that markets often see and discount the errors of our ways, even those with far different intentions. Even though throughout the globe we have been dealing with COVID and a vast supply chain disruption, the need for petroleum and petroleum-based product has continued to expand. It has continued to expand even in the face of extreme pressures for electric or non-carbon vehicles. THIS IS SUPER IMPORTANT. Is the inflation due to too many dollars chasing goods and services, or a shortage of supply of these goods and services? In this past weekend's Wall Street Journal there was an article, "US Resumes Oil Leases, Raises Fees." The article starts out immediately by stating that the Biden administration announced the sales of oil and gas drilling leases on Federal Lands but said it would sharply reduce the acreage available for leases and charge higher royalties on the oil and gas produced. The Interior Department said that yes, they were going to allow leases, but down 80% from the footprint of land. The oil companies that get the leases will also have to pay royalties of 18.75% up from 12.5% for onshore oil and gas. It goes on to say that besides a 50% increase in royalty fees that as a candidate, Biden called for ending oil and gas drilling on federal lands as a way to cut greenhouse gases and ordered a moratorium on new leases. This is clearly a decrease in supply causing an increase in prices. So, he increased royalty costs by 50%, during his first week in office puts a moratorium on drilling, and stops all land leases in the pipeline. What did we think was going to happen? This didn't stop the growth of consumption, instead, it forced us as a country to once again become dependent on foreign sources, made it more expensive, and in no way had an effect on decreasing the amount of consumption. We were just forced to pay more and get it elsewhere. Not good.

The most unfortunate thing is that this almost has catalyzed the financial need of Russia to try and take over Ukraine after Crimea for commodities, predominantly for energy, industrial metals agriculture, and precious metals.

See the actual amounts of each of these that are being affected by the conflict: 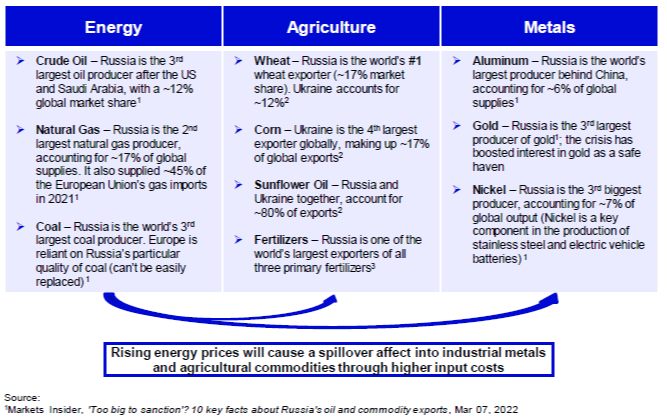 All of these have caused, by association, our inflation levels to rise. The offshoot of all this is that as investors, as opportunities present themselves, it is in our best interest to try and benefit. I don't mean this to say that we should "pile on" and take advantage of the suffering in the region, but more specifically to separate analysis from the emotional pain of the situation and participate if possible. Since the 1970s (the last time that inflation was angrily raising its head) every time the CPI has gone over 2% there has been a positive return on commodities 73% of the time. The times when commodities didn't create outsized returns was when we were coming out the backside of a dramatic slowdown. 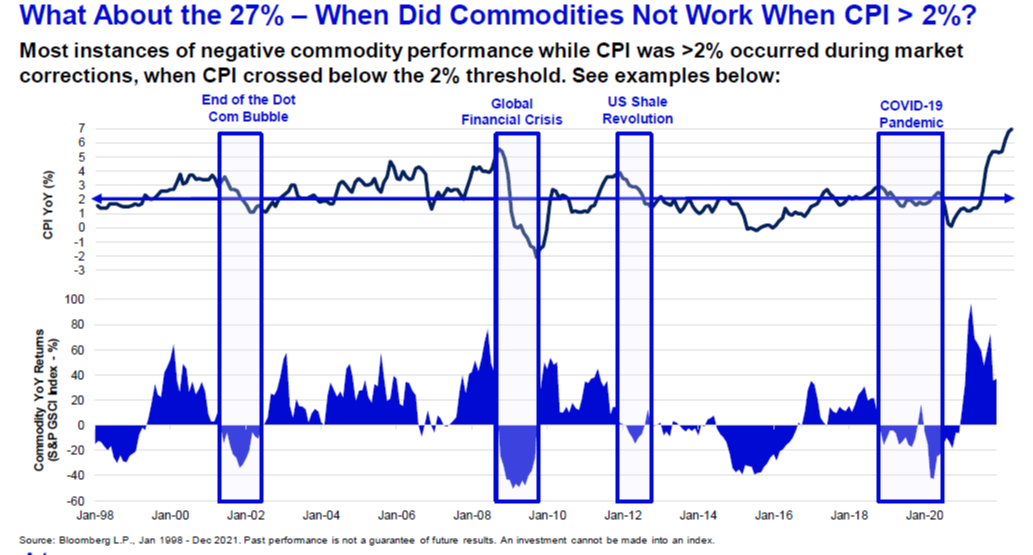 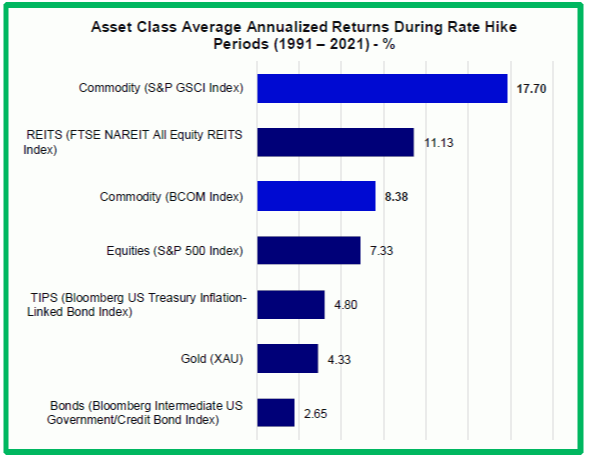 What we do know is the world's need for affordable oil isn't going to disappear anytime soon. Even in the case of this new "Green Transition" the demand for oil and natural gas is sure to expand if for no other reason than population and global economic expansion. So, what is the world experiencing? We really have a global backdrop of underinvestment in oil production, followed by Chinese demand growth and an almost immediate shut down due to the Russia Ukraine conflict. In two words, it has been a "perfect storm" for oil. 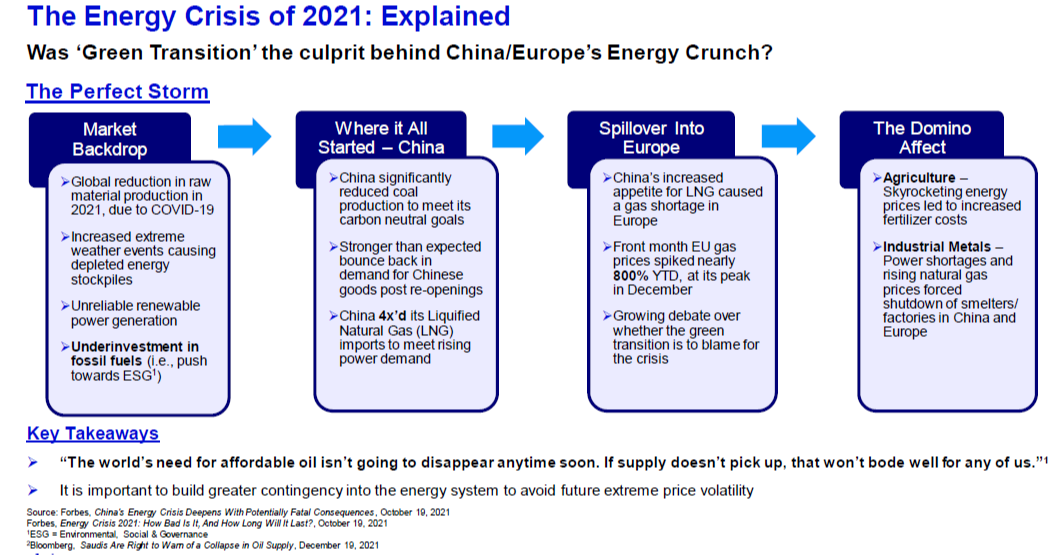 The last point I'll make today was the friction that is continuing to build due to trade embargos with Russia and China and what appears to be the eventual impact on globalization. As technology has allowed us to know exactly how much something will cost taking into account labor and raw materials, how much and how long it will take to transport and get to the consumer, and a continued rise in the cost of no longer cheap labor. Basically, the reasons why things were made in China and other low-cost resource and labor countries are no longer so attractive. In the Saturday Wall Street Journal, there was an article titled, "Is Globalization Unraveling?" I find this a must-read. We might turn inside ourselves, and pay a little more for the labor here in the US, but be happy that we are not held hostage by supply chain issues and military conflicts outside our control. How will this play out? I believe that inflation is here to stay, at least for a while longer. Will this force the hand of the Fed, or will the Fed's hand be handcuffed by a GDP growth rate that will surely be slowed by higher interest rates? Time will tell. In the meantime, we must invest appropriately for the hand that we have been dealt. We are leaders in technology and medicine. We can be energy independent once more- after re-engaging our efficient drilling capabilities. We are at full employment and our efficiencies in the workplace are continuing to expand. As a country, we are pretty solid. The world on the other hand- particularly Europe and parts of Asia, not so much! Again, stay tuned.

Please feel free to call with any questions you may have and how this current set of issues is affecting you. We sit at the ready to not only explain what our methods, disciplines, and portfolio methodologies are but also how they affect you individually so that you may benefit in this truly different world.