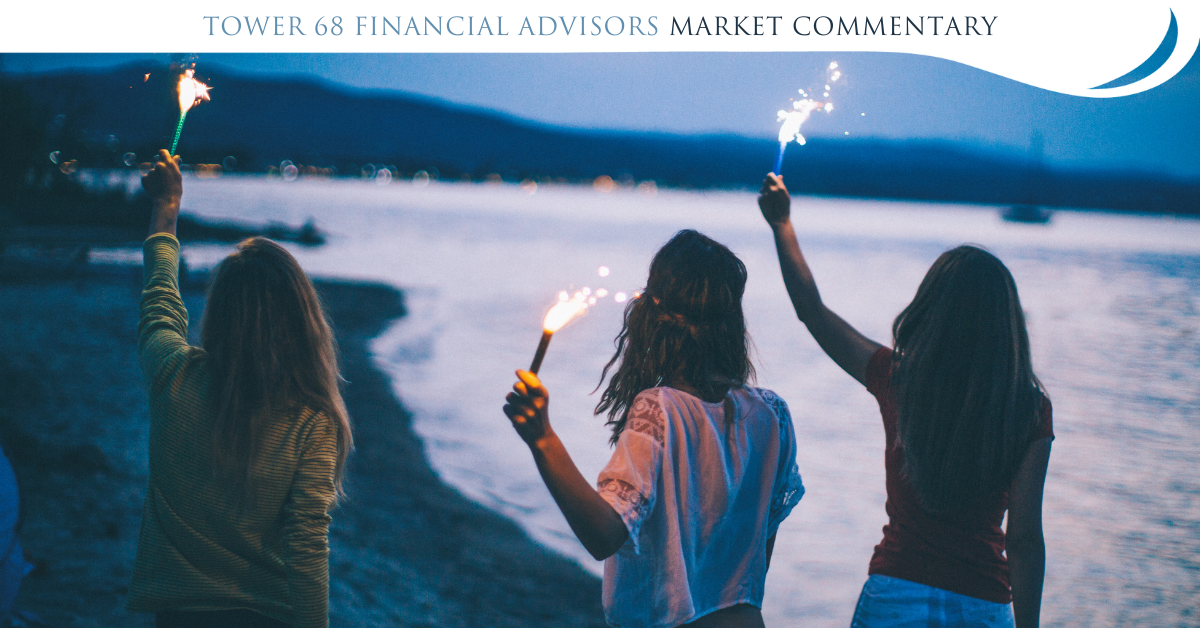 Sometimes The Clash Gets It Right

This week I intend to start things out a little differently. I could go into all of the different things that I think should be paid attention to, but when we start the week (after three really ugly weeks) with the DJIA dropping almost 1,200 points, hitting concrete, and bouncing to close up 99 points, I think the tone of this note should be a little different. I think we’re at one of the most critical junctures in years. Instead of rehashing all my recent thoughts here, I will refer you to my reports of the past few weeks. However, the bottom line has been that we seem to have entered a new phase in the market, with increased volatility, more stocks declining, and dips just not being bought the way they used to be. It’s felt different, and I have even made the case that we have been in a stealth tactical bear market given how many stocks are down significantly from their post-COVID Crash highs. Last week only reinforced that claim considering now 67% of NASDAQ stocks are down 20% or more from their 52-week highs and almost 40% are down 50% or more.

What has investors so worried? Well, Bespoke Investment Group sums it up well:

"Where should we start? In this week’s meeting, the FOMC is expected to put its hawkish pivot into practice and outline its plans to end asset purchases, hike rates, and shrink its balance sheet. Just as the FOMC is expected to start tightening policy because inflation and the economy are seemingly running too hot, economic data hasn’t been especially strong. Following last week’s disappointing Retail Sales report, manufacturing and housing-related data were mixed and jobless claims disappointed. A hawkish Fed into a weakening economy is never a bullish mix. It’s still very early in earnings season, but so far investor reactions to the companies that have reported has been extremely negative. Geopolitical issues certainly haven’t helped matters either, and the President’s plunging approval ratings are setting the stage for little to come out of Washington. That sets the stage for a highly combative mid-term election season as Democrats try to do whatever they can to stay in control and Republicans fight to take control. Happy 2022!”

That takes me to my main point for writing this report today. Unfortunately, there is no way to know when a major top has formed. I’m sorry but there just isn’t. There are ALWAYS some signs of a top, which is why so many people wrongly call for tops during the entirety of a bull market. Regardless, rather than focusing on making money and trying to buy the exact low of this decline, we need to be more concerned with keeping what we have and preserving capital until things calm down. I have always lived by the adage, “I’d rather be late and happy than early and sorry.” There is a chance that we are close to a major market bottom, particularly if we measure the extremes, we have hit this week. See a few below: 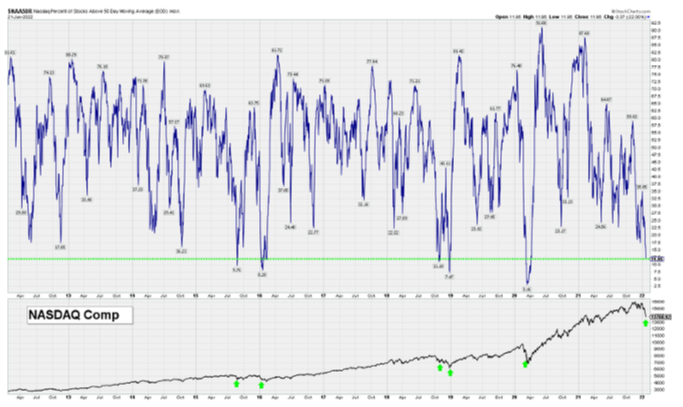 If this plays out like it has in years past (something I will expand upon here in a moment), but if we are about to see another significant rally and leg to this secular bull market, it will not require playing it aggressively from the exact low. As I always stress, making money in the market does not require bottom-ticking the lows, even though that’s where many investors spend so much of their focus. Yet, keeping money made in the markets right now feels like a time to be very aware of what we own, why we own it, and if the upside potential justifies the risks being taken. This is why one must pay particular attention to the direction of things much bigger than the stock market, the US Dollar, bonds, and commodities.

I spent this past weekend looking at a lot of charts and reading many opinions on the market to get a gauge of sentiment. The conclusions I have drawn are that the market is grossly oversold in the near term, investors are scared, and there’s a very good chance that there are many out there in a lot of trouble – getting margin calls and being forced to sell out at any price. This is exactly what I think happened on Monday; margin calls, short-covering, and general weekend hysteria being catalyzed by computer-generated volatility. The action last week just had the feel of panicked or forced selling. There were practically no sustained rallies and we ended up getting three true 80% downside days and one 70% downside day that just missed hitting the 80% threshold. Needless to say, Monday eclipsed these and was clearly a 90% down day. The high-spec stuff has crashed, and now the crowded trades in the “hedge fund hotel” names are taking their turn. There are still pockets of the market holding up relatively well – mostly in Value and Defensive names. Is this because they weren’t over-owned by institutions, hedge funds, or mutual funds, or was it because it is their time to be in the sun? I really can’t answer that, but I have never made long-term money in a company that grows at 4% per year, is trading at a multiple at 40% higher than the S&P 500, and makes bathroom tissues. Yet even these areas looked vulnerable late last week, and as we came in this week in sell mode, things sort of hit a crescendo. As I have noticed many times before, it’s only when the market should rally and does not that we typically should be worried. And with a bottom setup close to being in place, we should rally here soon but need to remain on high alert.

I do want to go through the bull case, though, that would support a major low being close. As mentioned, we have already been in a “bear market” environment, if we are judging by the extremely weak market readings: the NASDAQ Advance-Decline line topped in February of last year; the NYSE contains more blue-chip stocks, but it topped out in November and just broke down to its lowest point since May; the NASDAQ percentage of stocks above the 50-day moving average has also been coming down since last February and now sits at its lowest point since the COVID Crash (11.95%); the NYSE version has held up a little better but it is now in “washed out” territory under 30% (26.62%); the CBOE Total Put/Call ratio ended Friday at its highest level since March 2020, with put buying greatly exceeding call buying; and as of Friday, 1870 more stocks across the U.S. exchanges hit new 52-week lows than 52-week highs, the worst reading, again, since the COVID Crash days of March 2020. 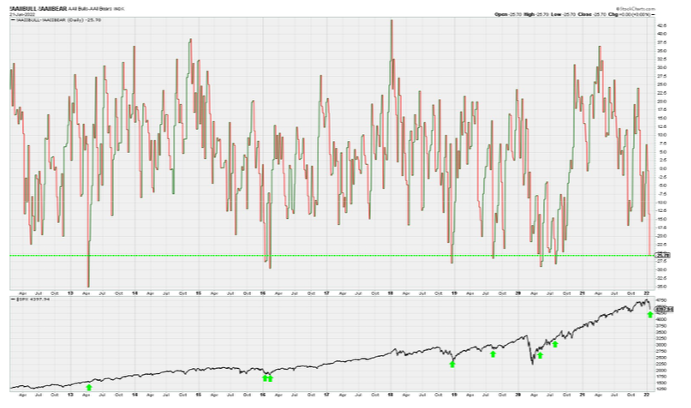 Not surprisingly, then, investor sentiment has been crushed. In the latest AAII weekly survey, just 21% of those surveyed are bullish over the next six months compared to 46.7% bearish. The 25.7% spread between the two is the highest since July 2020. When we add all this up, this is the kind of environment in which lows have formed over the past several years. There remains the chance that this time will be no different, stocks will find a bottom here soon, and that will kick off another leg to the upside. Something I forgot to mention last week, too, is that Friday was a major options expiration date. Not only was it the normal monthly options expiration, but the January contracts were likely very popular among buyers throughout last year as a way to speculate on bigger long-term moves (mostly calls). With that related hedging and adjusting now out of the way, we could see some of the pressure taken off the market, though I think we should wait to see evidence of it first before jumping in aggressively.

So, I do want to stress that I think conditions have already gotten bad enough that a low could form. I deduce this by seeing where we have bottomed in the charts I have inputted above. We don’t have to see more weaknesses. However, IF something has, indeed, changed in the underlying market I don’t think we can automatically consider this the “slam dunk” buying setup that it has been in recent years. I say this because interest rates, oil, and value vs. growth have definitely changed from recent periods. Instead, I think we need to be more patient this time. That is particularly true because I still don’t think the overall risk vs reward is super attractive given overhead resistance lines on the indexes. Things could still get uglier, especially with an important Fed meeting this week, geopolitical uncertainty, and the fact that some stocks have been absolutely slammed recently on any hint of growth slowing down (e.g. the online movie leader, the stay-at-home exercise company). As we enter the heart of earnings season in the coming weeks, we could definitely see more stocks join in the carnage.

So, once again, if you are looking to do some buying, I would advise at least waiting for signs of strength before doing so. But overall, I believe a more patient and protective mindset will serve us better here until more evidence accumulates those conditions are improving and some repairs are made to the recent damage done in the charts. I do think better days lie ahead and we now seem to be set up for a possible surprise with so many leaning on the negative side. Yet, price action trumps all, and that action has been brutal lately. Unless that changes, the path of least resistance appears to remain on the downside for now. IF we do start to see evidence of it changing, the more aggressive types may want to start taking shots, but, again, I would wait to see that strength first rather than trying to catch a falling knife.

I am seldom this dour, but at times things just simply aren’t that pretty! We are all in this for the long-term, but in the short-term caution is warranted. This doesn’t mean selling what is good and growing, but rather it might just be more prudent to be a little more patient and cautious.