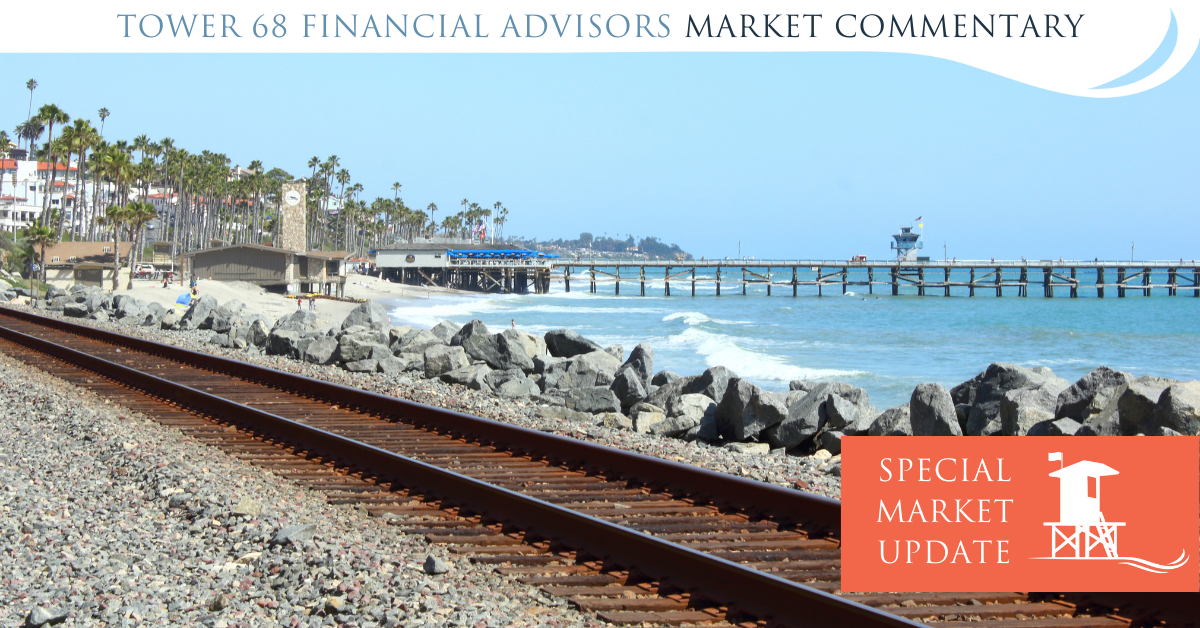 Stocks at a Crossroads

In the spotlight today: economic expectations due to domestic retailer weakness, sentiment, and valuations — the big things you need to know:

As we’ve highlighted before, if the S&P 500’s decline this time around matches the late 2018 drawdown, the index would fall to around 3,850, a level that the S&P 500 came close to hitting but failed to breach intraday on May 12th. In this context, we think the S&P 500 is currently at an important crossroads. If 3,850 doesn’t hold, we think the equity market will be telling us that it’s starting to price in a recession. If that happens the key number to keep in mind is 3,200 which would represent a 32% drop from the January high – right in line with the average drawdown seen in past recessions. 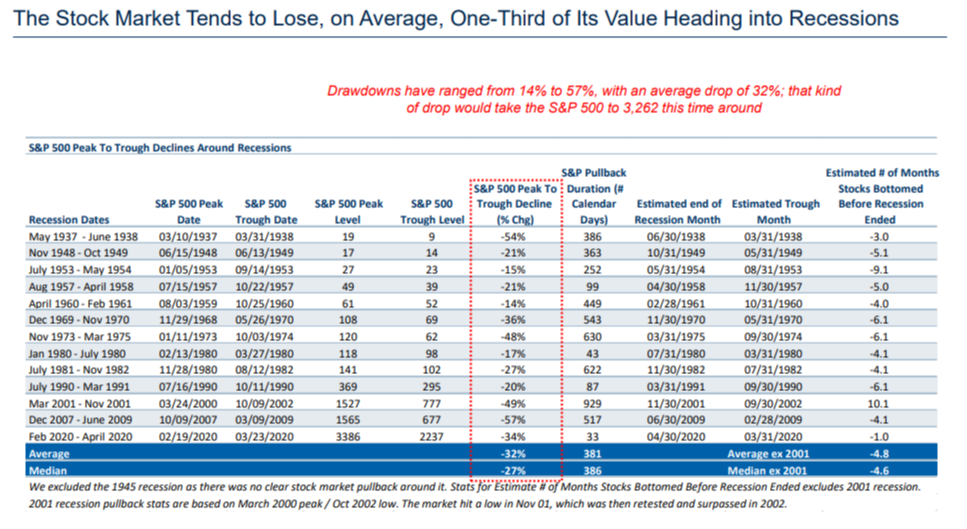 Though we remain mindful that the risks to the economy have grown, it makes sense to us that the S&P 500 is attempting to stabilize just as it is approaching the outer band of growth scare territory. While recession expectations among economic forecasters have inched up recently per Bloomberg, they are still only on par with another post-GFC growth scare (2011). GDP forecasts on the Street have been pulled down but are still slightly above trend for 2022 and are still north of 2% for 2023. US economic surprises remain in positive territory. High-frequency economic indicators like dining, flying, back to work and same-store sales remain stable. Freight rates have come down sharply from their highs. Inflation expectations are retreating. 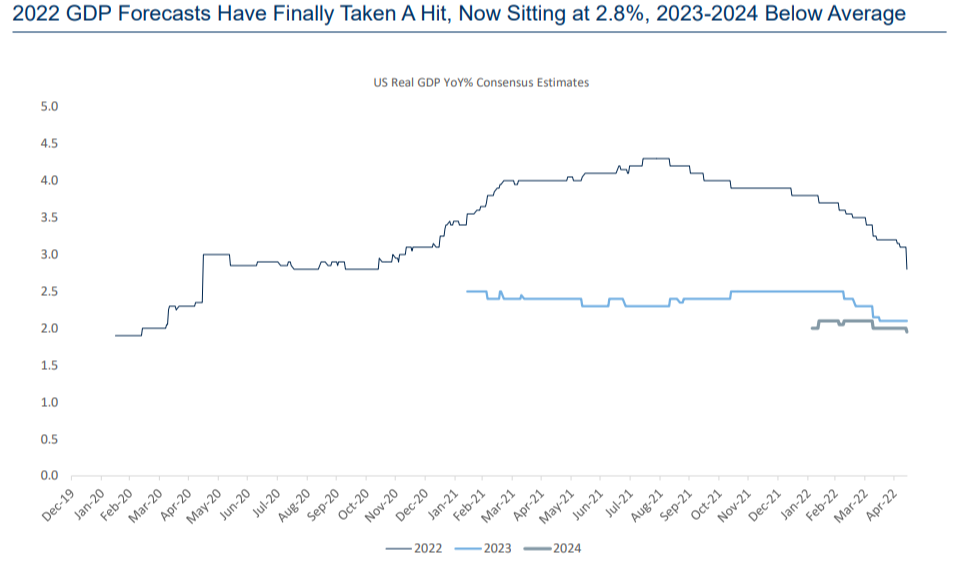 We don’t blame the stock market for wanting to see evidence of an unraveling before pricing it in, given how frequently the economy and US consumers have been more resilient than expected in recent years. As for the Fed and the fear that they will tighten too aggressively, our economics team noted last week that “It’s fair to wonder if the Fed will even get to neutral. We think Powell is growing worried about the degree to which the economy is going to slow.”

While retail investor bearishness on equities has been extreme, such that it has been sending a contrarian buy signal for the S&P 500, that simply hasn’t been the case for institutional investors. And it may have simply been that in order for the US equity market to find a bottom, institutional investors have needed to catch down to retail. 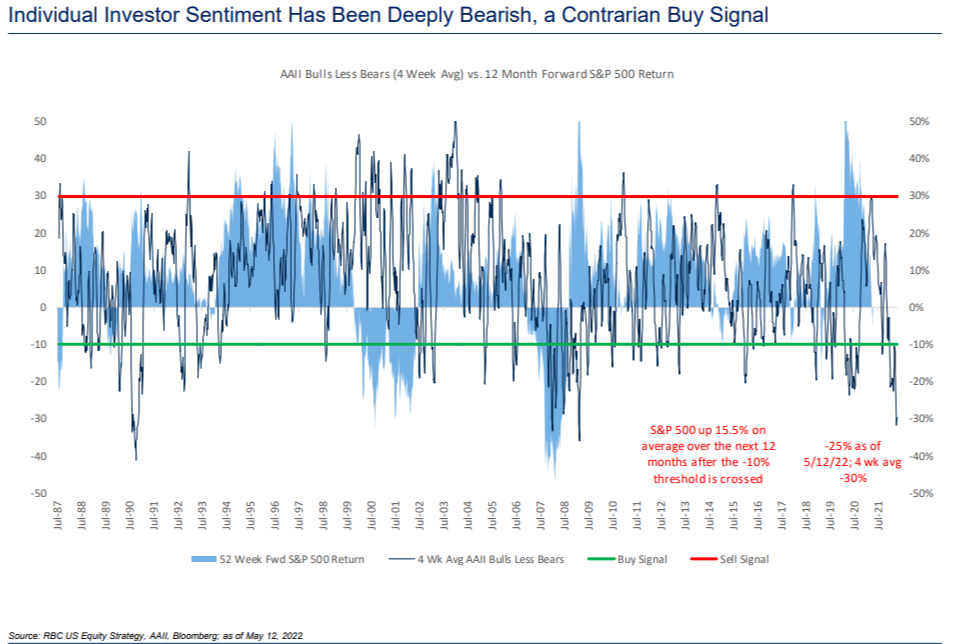 Today, there’s been no meaningful change in the sentiment for retail investors, where net bearishness remains at the deepest levels we’ve seen since the Financial Crisis. Important progress has been made on the institutional side, however. The main way that we monitor institutional investor sentiment is by tracking the weekly CFTC data on asset manager positioning in US equity futures. Importantly, when we aggregate the data for all of the major contracts, we find that positioning is now below 2020 and GFC lows. Though it’s still technically above 2011 and 2015/2016’s lows, it’s gotten much closer to them. 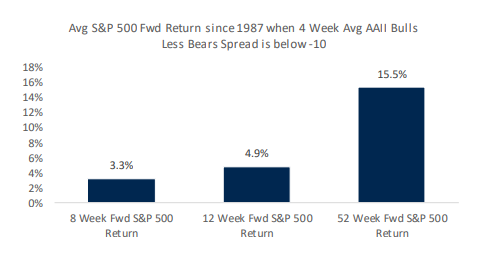 it’s also worth noting that the relative P/E multiples of the baskets of the most popular stocks in hedge funds that we track (as measured against the median S&P 500 stock) have returned to 2018-2019 levels, though not pandemic lows. While valuations aren’t a reason to own US equities yet, they are no longer a reason to avoid them. A recent story I heard was that in La Guardia airport, one beer is now $27.00. That’s right, for a beer! I won’t even go into how freight rates are coming down as diesel fuel makes the cost to fill up a trucker’s tank over $1,100. Something has got to give. It surely doesn’t bode well for increasing taxes nor for further government involvement in public company management.

As the old saying goes, “it is always darkest before the dawn.” I don’t know when the sun will shine again, but I do know that in looking at most prices, it is pretty dark out there right now. At the same time, I am writing this to provide some level of perspective. I don’t like to be negative, but at times honesty is clearly the best policy.

Please have a nice weekend but save it up for the holiday weekend next week. It is well deserved by all!