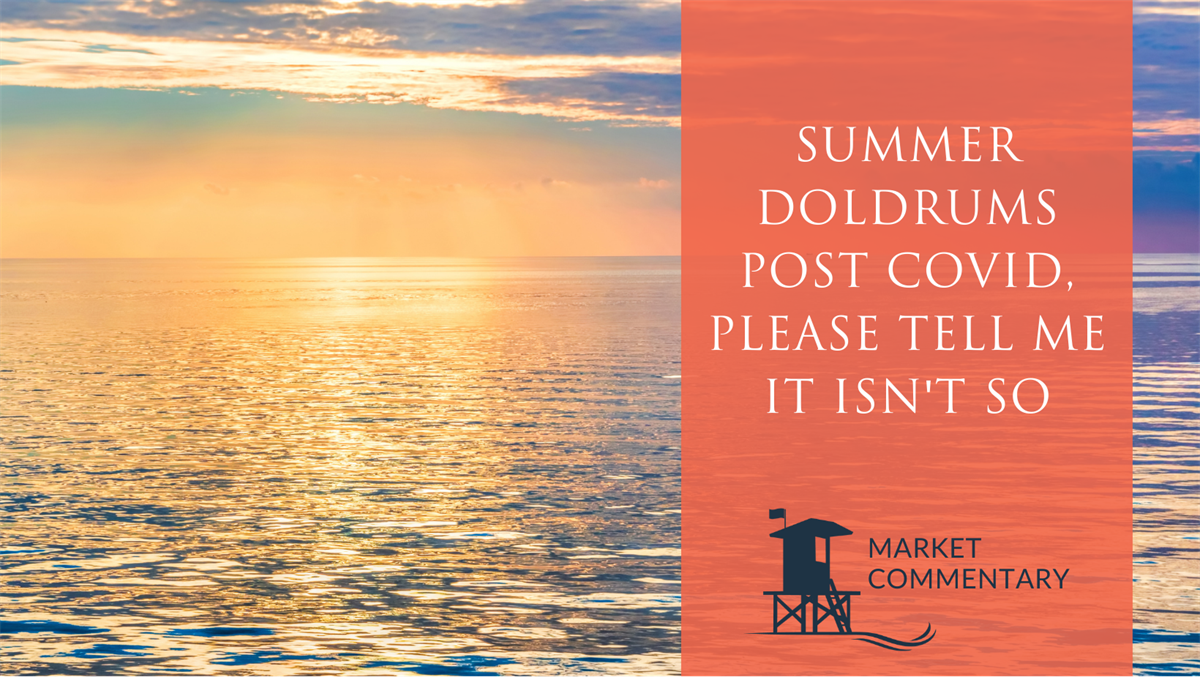 Summer Doldrums Post Covid, Please Tell Me It Isn't So

The Producer Price Index surges to all-time highs, and the S&P 500 and the Dow Jones Industrial Average does as well, hmmmm, that's a little strange. Inflation at the producer level is rising at never-before-seen levels and the indexes rally to new highs even though most companies at the producer level not only are lacking inventory but they are also challenged to take any action to increase margins. Just seems a little strange. Last Friday, we saw some very good setups in place for many leading companies in many leading industries. And as seen over the last few weeks the musical chairs movement of daily leaders continues. On Wednesday of last week, it was the medium sized companies (known as the mid-caps), the larger Dow stocks moving and the small-cap companies joining the party. On Thursday, just when it could have been inferred that a new up leg could be underway, they all paused, and the NASDAQ 100 was the leader. Yes, each session seems to be quite back and forth- of late, but that is not all bad! Remember at the end of last year and the beginning of this the big tech companies were sort of pulling the markets up. Now you have what I consider a broadening of strength. THIS IS EXACTLY WHAT YOU WOULD LIKE TO SEE. It is almost as though many more companies are beginning to join the party. So, what is an investor to do? As I often like to say, "You pick your weeds and water your flowers!" Cull your portfolio of what isn't working and add to those that are adding to performance. Of course, often easier said than done in the heat of the moment.

The broad market seems to be holding up relatively well lately despite a surge in the COVID cases just when most believed we'd be "done" with COVID. Monday of this week we actually experienced new highs in a number of indexes while at the same time the press stated that the Taliban has once again taken control of Afghanistan. I guess that is saying something, but at the same time we still aren't seeing the market take off in a way that suggests collective risk appetites are hungry enough. What I find very good is that the market is just plodding its time, during the historically worst month of the year, August (source: Stock Trader's Almanac), and slowly gurgling to new highs. Every time I turn around, I am seeing two things; analysts are raising their year-end targets on the S&P 500 and numerous prognosticators are foretelling doom and gloom immediately ahead. So, what I am gathering is that the analysts think the market should be much higher by year end, but there might be a bump in the road between now and then. Jeffrey Saut of Saut Strategy said, "The equity markets have been in some form of a 'buying stampede' since March of 2020 with very little downside. The stampede began with the S&P 500 at roughly 2280 and it currently is sitting around 4470. The rally has been stunning! In fact, in my nearly 60 years of market observations I do not recall anything quite like it. It has truly been a historic 'run'." He goes on to say that this rally may be a little long in the tooth, and many of his fellow market commentators are arguing for some caution, yet under the surface the uptrend that we are enjoying seems to still be very much intact.

In the title of this week's missive, I reference the 'summer doldrums'. I believe that sitting pat with good companies and sectors should be a good investment strategy as the indexes continue to move to higher highs, yet there is no question that we are still somewhat in a 'dead period' on the calendar before the Labor Day holiday. Historically, in the "old days" before crypto, 24-hour trading and RobinHood, August was the month that traders took off just before the kids were back in school and many participants were on vacation. This also coincides with the ending of the second quarter earnings cycle and therefore there just really isn't a lot to do. Today, I also believe that we have all become conditioned to the next major sound bite. Sort of like the COVID virus being followed by the Delta version, and soon to be the Theta version. I am not saying it isn't real, but to base one's life and work on the next wave of virus is hardly a way to live. The things that I am paying attention to are:

In closing, it is clearly hot and sweaty outside, but inside the stock market companies are lean, with low inventories, great technological efficiencies, and unquenched demand in almost all areas. In the August edition of Bob Brinker's Marketimer, Bob makes a really great point; "Our view that the current period of elevated inflation will prove transitory is supported by the excess capacity evident in the industrial production report. Capacity utilization is currently 4.2% below its 1972-2020 average, which is indicative of excess production slack. When the economy overheats, there is no extra production capacity, and this places upward pressure on prices. IN the current case, there is plenty of excess production capacity in the system. As a result of the cutbacks that occurred during the pandemic, we are seeing upward price pressures in production due to material and other input shortages caused by supply chain issues. We expect these problems to be resolved in the months ahead as the pandemic gradually subsides and cost pressures in production diminish."

I often like to say, "it's the economy stupid." We are Americans. We like to work. We like to win. We like to have good lives. The stage has been set. Yes, there are always a few flies flying around to get in the ointment, but at this point the only real issues are the virus and, according to Fed Chairman Powell, transient inflation. Both of these will have to be dramatically worse to overshadow American ingenuity and our ferocious growth in technological efficiencies across all facets of our economy.