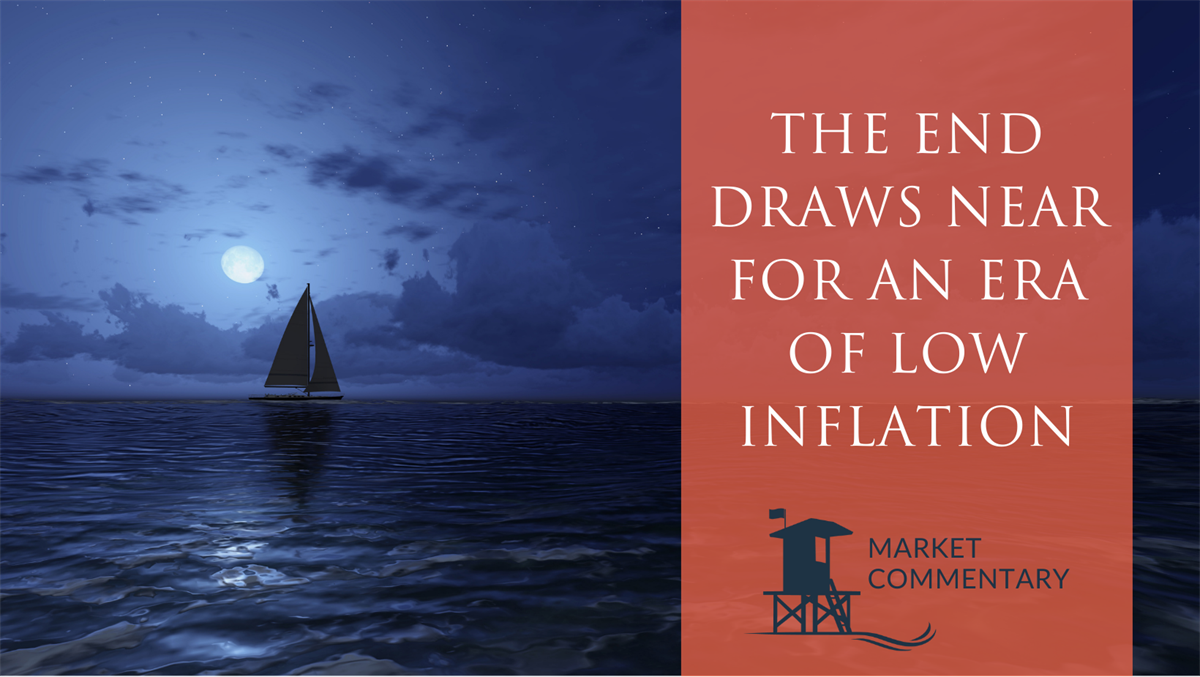 The End Draws Near for an Era of Low Inflation

When I am asked what I worry about in the financial markets, the answer usually is "nothing and everything,” because everyone else in the market seems to spend an inordinate amount of time worrying, and so all of the relevant worries seem to be covered. My worries won't have any impact except to detract from something much more useful, which is trying to make good long-term investment decisions. Today's worries include, but are not limited to: China's regulatory actions, high rising fuel and food prices, labor shortages, inflation or stagflation, the effect of Federal Reserve tapering, disrupted supply chains, potential default due to the debt limit standoff, and the ongoing dysfunction and polarization in Washington. These are legitimate concerns and seem adequately reflected in the market, particularly so when stocks corrected in September. One thing I am pretty confident of is that twelve months from now those worries will have been replaced by a new set of worries.

In the meantime, stocks are entering their strongest seasonal period. The major US indices are all up double digits, the Dow Jones Industrial Average, the S&P 500, the Mid-Cap Index, and the NYSE all traded at new all-time highs last week, so the bull market appears to be continuing. As in most markets, there are areas of over-valuation and of under-valuation, with the bulk of shares appearing to hover in the area of fair value relative to their prospects. We, of course, continue to focus on securities where the opportunities for long-term excess returns appear greatest. At present, earnings look pretty darn good. See below: 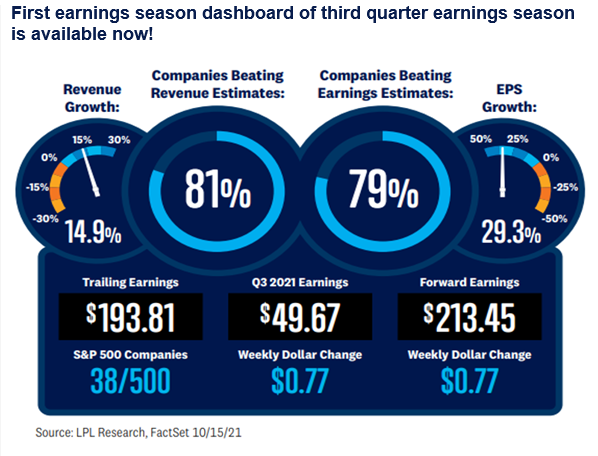 With economic wisdom such as it is...White House press secretary says empty shelves are a 'high-class problem,' adding a later comment about the treadmill arriving a few weeks late. No, this is the USA, not the USSR. Empty shelves are a sign of structural problems, of supply unable to meet demand due to restraints. It is not an issue of your treadmill being delayed. It is a result of restrictions on manufacturing, shipping, etc., that has led to a dearth of materials. With economic geniuses such as these, the troubles are not ending anytime soon! More than that, Psaki's comment is a modern-day "Let them eat cake" moment. So, the newest film reels show mortgage applications dropping. With housing starts and permits tanking, as seen Tuesday of last week with September starts, it is no surprise mortgage apps fell 6.3% (source: Bloomberg). As for "stimulus," Tuesday Manchin said 'no' to carbon taxes and still maintained, more or less, his $1.5 trillion stimulus limit, wanting infrastructure first. He later went on to respond 'BS" (he used the full words) to claims that he was leaving the Democratic Party. 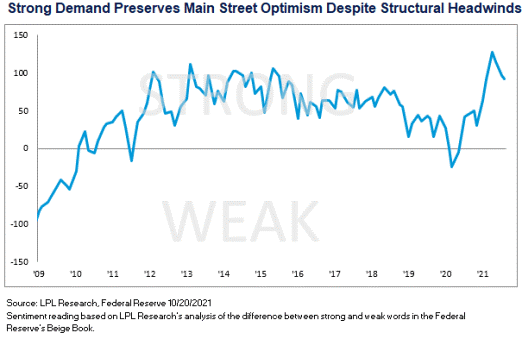 What I have found particularly interesting of late is the friction within the current administration. It is clear that there are many things that were trying to be pushed through in the infrastructure bill that were simply not OK with a number of the moderates. In the Saturday New York Times, there was really a terrific article that addressed the division amongst the Democratic party. In the article titled, "Democrats Are Divided On Obama-Era Economics," there were some fairly aggressive comments, not often seen in a normally liberal press. "On the surface, there is a clash between lawmakers with different political instincts. But there is also a clash over whether a more traditional view will prevail over a newer approach that has become mainstream among economists — especially those who lean left — but with some acceptance among center-right thinkers. In the older view, it is irresponsible to increase long-term budget deficits because it will curtail private investment and risk a fiscal crisis. Any major new spending should be coupled with enough revenue-raising measures that the number-crunchers at the Congressional Budget Office can conclude that the numbers will balance over the next 10 years." I love it! Does this scream don't spend it if you can't pay for it? I like it! They go on to reference the falling interest rates and how this has been helpful in budgeting the debt caused by the increased spending. That implies the US can maintain higher public debt than once seemed possible without excessively constraining private investment or facing excessive interest costs.

The Federal Government, with extensive help from the Federal Reserve, launched a multi-trillion-dollar response to the pandemic despite coming into the crisis with an elevated public debt. Rather than spur a crisis of confidence in US Government bonds, their values have surged! Is this because we are the safest boat in a turbulent global financial sea? I believe so. And this brings to light the reason why everyone is so concerned with the level of interest rates. If rates should revert to where they were in pre-2008 levels, all bets are off. At that point, the negative effect of large debt coupled with the cost of repayment could be almost impossible to reverse, and we could face a severe fiscal crisis. This is why in almost every note I write I reference the US dollar. Should the US dollar begin to decline versus foreign currencies at a consistent level, this would be a statement of opinion of how dire our situation would be. At this point, it is actually quite the opposite.

Not long ago, research into the trade-offs of welfare spending tended to focus on narrow questions like how much a given benefit might discourage people from working. Senator Manchin, meanwhile, has said, "I just don't want our society to move to an entitlement society," suggesting he is focused on the ways these benefits might create a near-term disincentive to work. I really don't think it took Manchin to bring this to light. Virtually anyone in any industry where there is semi-skilled labor is noticing the crunch of these benefits. The question becomes how much of a negative effect it becomes before the economy reflects it. At this point, technology and efficiencies have masked a great amount of these ills. Hopefully, this can continue.

So, what are the markets saying? For this, I love to call upon one of my favorite analysts, Ari Wald. In Ari's simple and straightforward words, "Still no alternative." He goes on to say, "We have received inquiries about whether a flatter yield curve would be problematic for stocks: we don't think it would. We agree that the possibility of curve flattening is reasonable because we see greater room for the short end of the curve to rise, as it did in 2017. However, as long as the long end is also pointed higher and rates are rising for the right reasons, we expect equities to remain well bid. We're of the view that the direction of rates is equally (if not more) important than the level. Generally, we see low-and-rising rates as bullish for stocks, and vice versa." Boom! And this is how I see it. Rising rates are bad if they are inflationary without growth. If there is economic prosperity at the same time, then the rising rates are warranted and wages and labor rates move in the same direction inferring economic prosperity.

Only time will tell, but at this point, Q3 earnings are coming in far stronger than expected, expectations are being raised, and interest rates are remaining on a level keel. Could this mean a year-end rally? Could be, but at the same time, if it is too obvious, well, then it is just too obvious. For us, we will focus on the leading companies in the leading sectors and hope that they provide us with excess returns. Only time will tell. If you have any questions, simply call us and ask. We welcome your questions and your interest. If you don't ask, we don't know you have a question.

Have a Happy Halloween. Time for kids to dress up and consume too much candy. I wonder what the hot costumes will be this year. Trump? Biden? Manchin? Powell? The Power Rangers? Sorry, I guess I'm old. Speaking of kids, I thought the attached would be of interest to all of us old-timers! 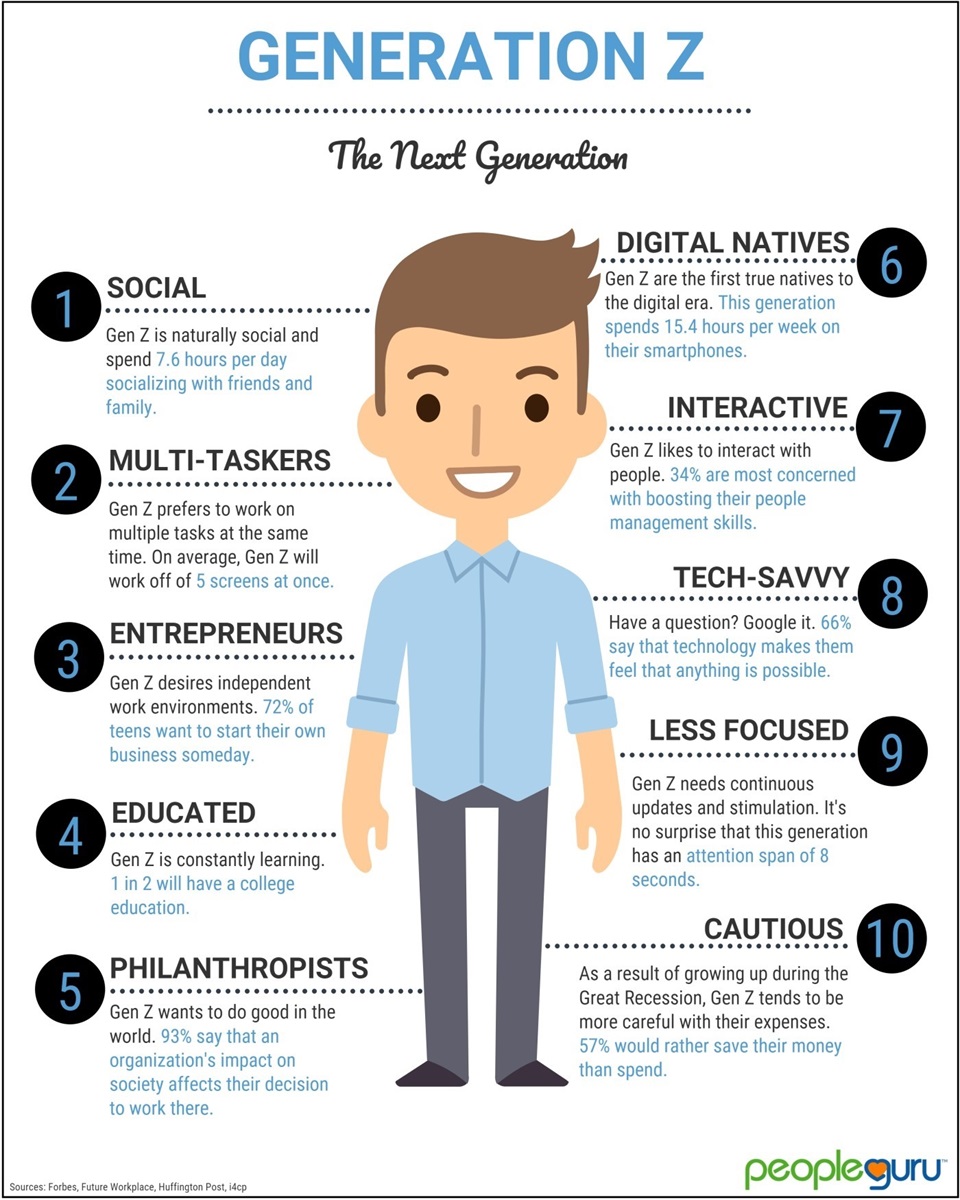