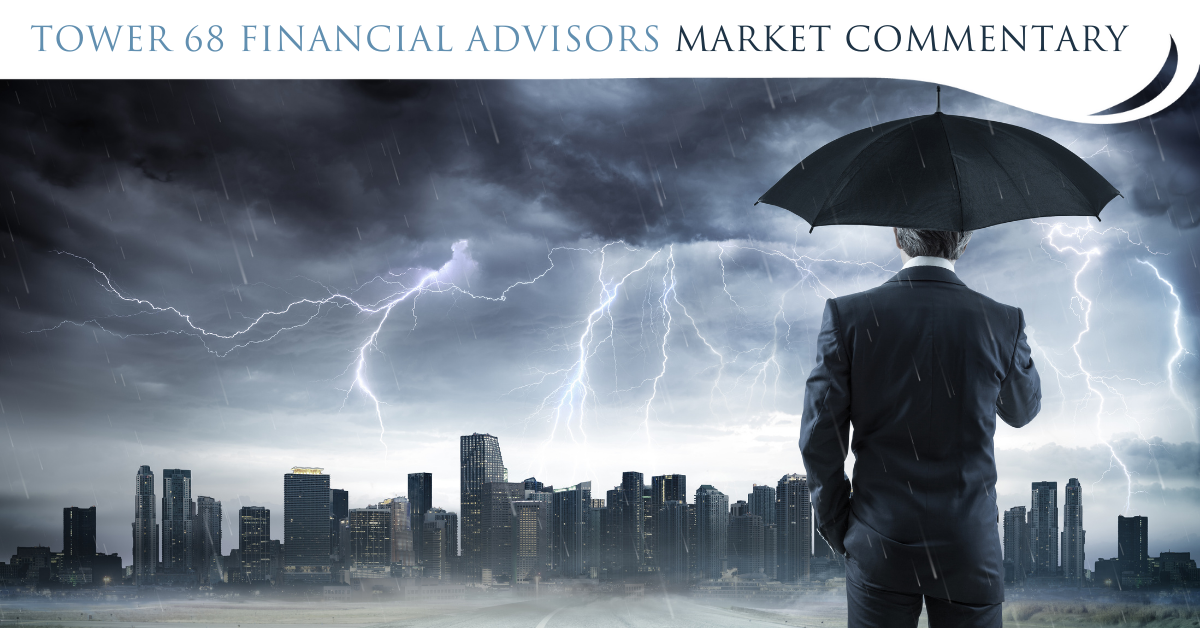 There's nothing like a brace of uncertainty to cause a surge of worry. Thus far, 2022 has been a year in which equities and bonds have had the proverbial "kitchen sink" hurled at them. Given all this, the US equity market is about where it should be; beat up but not dead.

No one can say that the Federal Reserve can't do the impossible. Many believe that Jerome Powell and the Fed are well behind the inflation curve and have a lot of catching up to do. It is always easy to throw stones such as this but think back to COVID. What does the Federal Government do when we have an unprecedented and immediate shutdown of virtually all parts of the economy almost overnight? The Fed prints money to put a bandage on the consumer that is still recovering from the financial crisis of 08-09. As a result, consumer prices are up 8.5% from a year ago, the largest increase since 1981.

While the Fed has been talking tough and lifted the funds rate by a quarter percentage point in March, overall monetary policy remains very loose. But could it be that we have reached a high point in inflation? Quite possibly from the recent rollover from the high in the 10-year and 30-year Treasury yields are signaling a decrease in the growth rate of the economy.

The famous technician, Larry Williams, who is often quoted on Jim Cramer's Mad Money, does a lot of cycle work. In his cycle of inflation forecasts, we are at the top of a cycle currently. So, is it time for the inflation scare to back off a bit? Should we see CPI starting to go down?

On this last point on commodities, food remains a serious and growing issue. On Friday, April 22, a couple of stories underscored the issues with food: 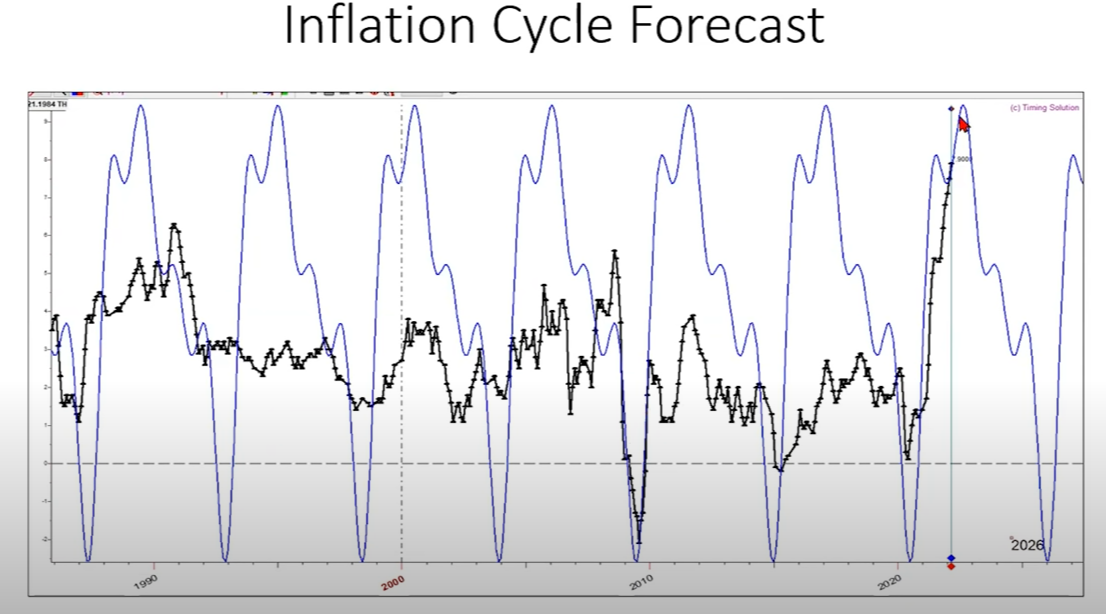 The Inflation Cycle Forecast chart shows the current cycles going back to the mid-1980s. As can be seen to the far right, inflation should start to decline around June/July. When inflation peaks and begins to come down it is a very strong buy signal for equities going back to the 1950s! When inflation rolls over we are generally in a place of stock market lows. Larry Williams went on to show a chart of Inflation Peaks vs. US equity market lows seen below. This chart takes us back to the 1950s action mentioned above. What is interesting is that when we come off a spike in inflation highs it usually coincides with great times to commit to the equity market. 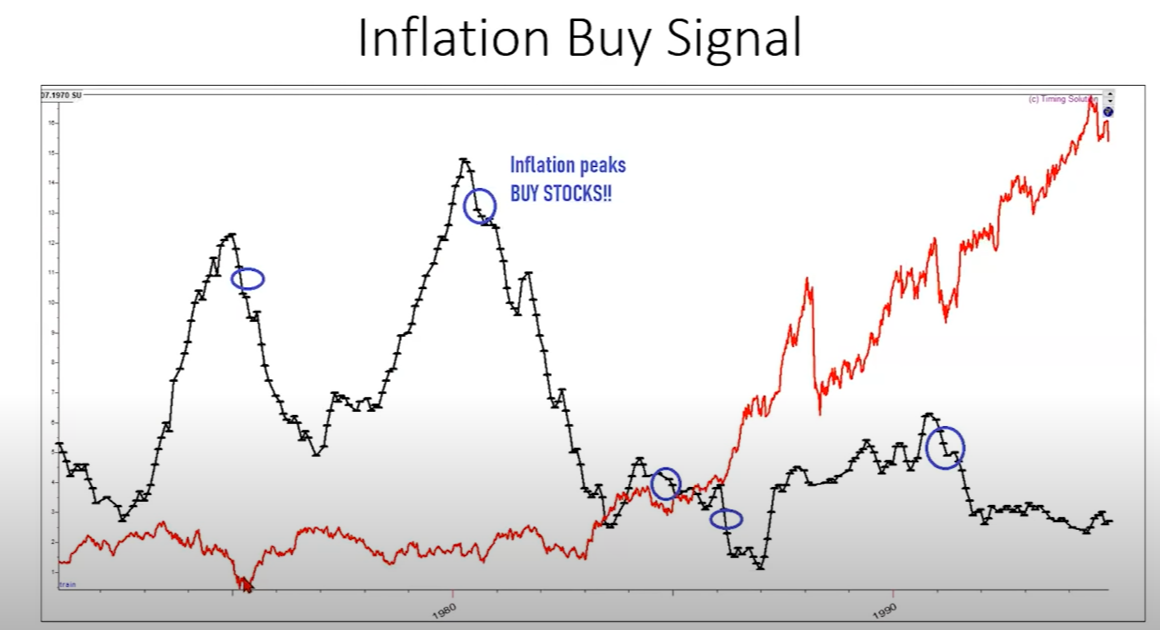 It would seem only fitting then to show where the S&P 500 currently sits. As Andrew Adams so aptly inserts the term DANGER right at where we currently sit (see picture below), it is important to look at the RSI chart in the lower portion that reflects that the intensity level of the decline seems to be losing steam. Again, right at the time of the circled points above. The S&P 500 is clear back to where it was in May 2021. What I find important about this is that we have experienced fairly aggressive upside earnings reports and future forecasts since that time. Both of these tend to indicate that with earnings up and prices contracting, valuations are declining and therefore making companies more attractive. Can this contraction go on for some time? Of course, it can! Hence I am far from a place of telling investors to put the pedal to the metal and instead of the feeling that if the markets are putting in a durable bottom, we should have plenty of time to build positions like the bull market that has been in place since 2009 appears to have more than a few more years to run. 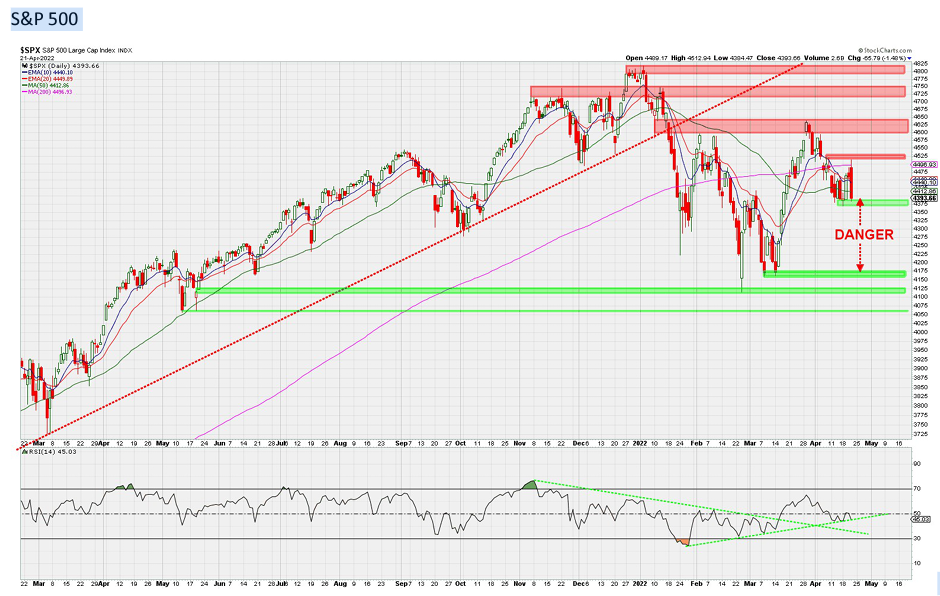 The last point that I would like to make is about the chart of the US Presidential Cycle (I have referenced this chart numerous times in past newsletters). We are smack dab in the middle of the mid-term year that has historically not been particularly friendly at the time but has been a nice setup going forward. 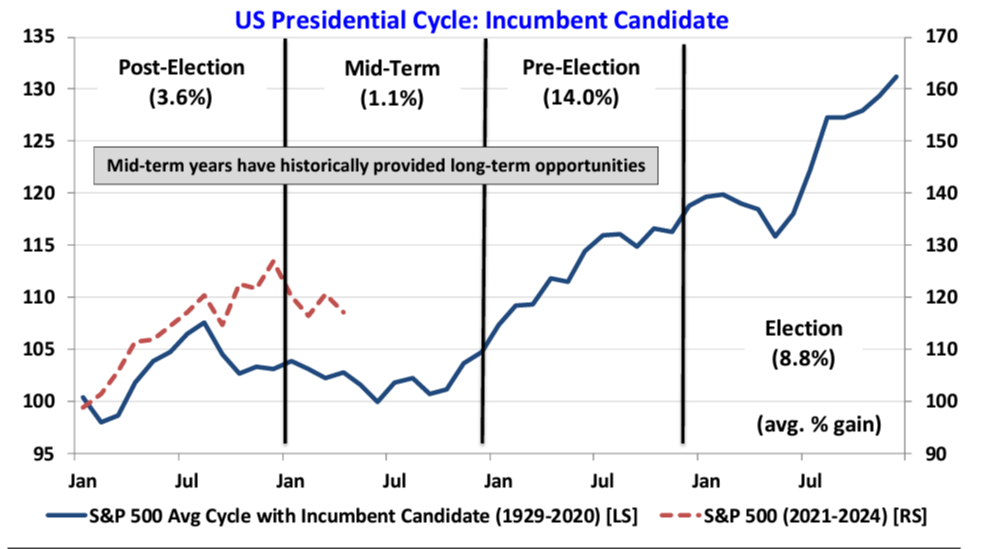 In Jeff Sommers' Strategies column in the Sunday New York Times, titled Why Midterm Election Year Are Tough for the Stock Market, he ends with the question, "What are we to make of all this?" As shown in the above chart, since 1929, the second half of the year tends to show a nice rebound and a rally next year tends to be a pretty high probability- actually the third year of the cycle tends to be the best. He goes on to say that if the Fed tightens too quickly it could throw the economy into recession and that this would probably not be helpful to the equity markets. To me, Fed Chair Powell seems to be a pretty smart guy that isn't swayed by political agenda. He should be addressing inflation at a measured pace and if he sees signs of a slowdown in GDP, Labor rates, or inflation in general, he is probably not going to be hasty at raising the rates unabated. Time will tell.