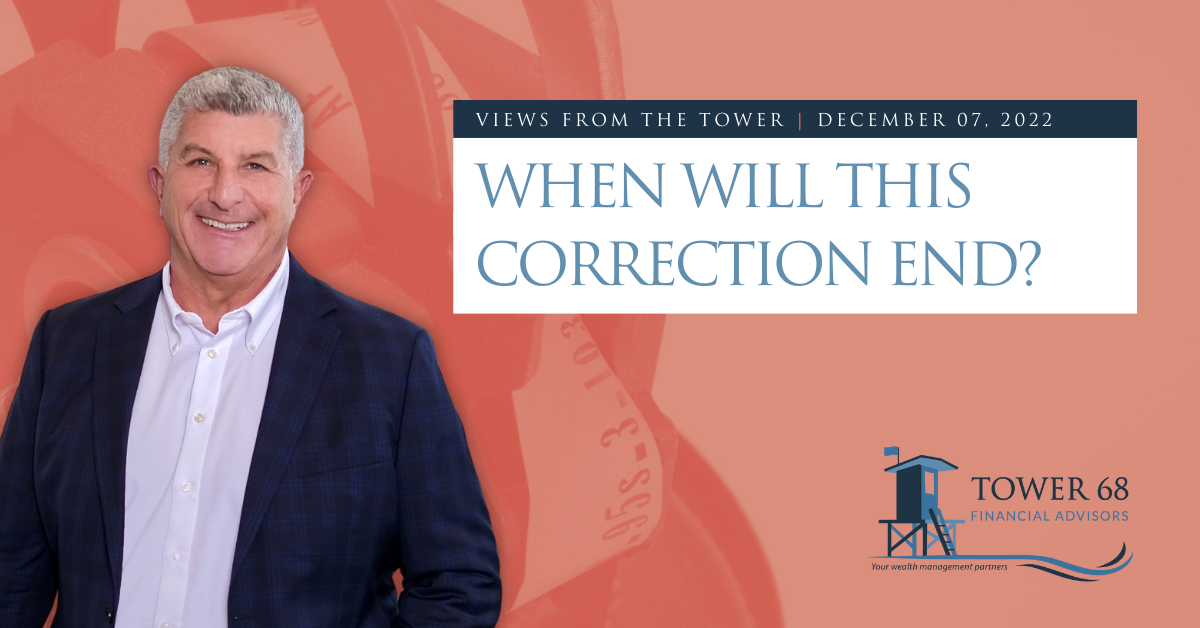 When Will This Correction End?

Investors are incredibly inventive in their thoughts and solutions, which is why all crisis situations get dealt with. When all seems lost, the market finds a low and starts higher once again. The pain point needs to become enough of an issue that expedient action is taken as many minds converge on the problem. Normally, these many minds are a policy decision of some type that lets market participants know that leaders are truly paying attention. Although the markets appear dire, their attention to the situation gives confidence for the eventual turn to set the foundation for future advances. If one is to look at the comments from Jay Powell last week, it was assumed clear that he understands that the raising of rates, as he has been doing, will eventually achieve his objectives, but that he is actively evaluating data to make sure (as best he can) that he doesn't devolve the US economy into a protracted recession.

Usually, when the equity markets are in a protracted decline, the bond market high-quality bonds have tended to be the place to hide out and avoid the volatility. This year has not provided this safety valve. In actuality, a portfolio of long-dated bonds has been hit almost as badly as the equity markets and sustained the worst decline in the history of bond investing. 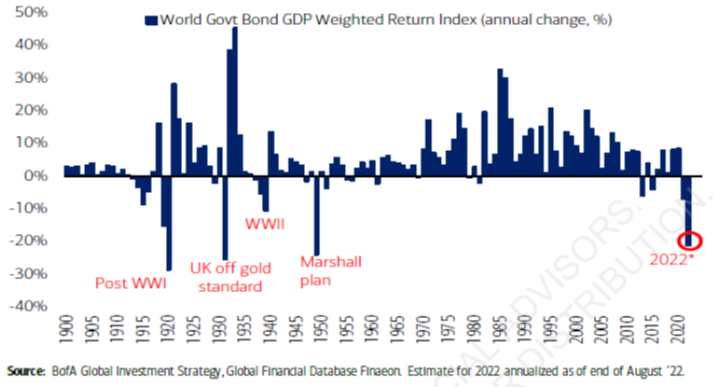 The same can be said for the moderate investor who has a balanced portfolio. Normally this portfolio doesn't participate in the entire move of the equity market, but instead is balanced by some savior of the bond component. This strategy has been equally beaten up as it has sustained the worst decline this year since the early 1970s. Again, a very uncharacteristic outcome to be sure. 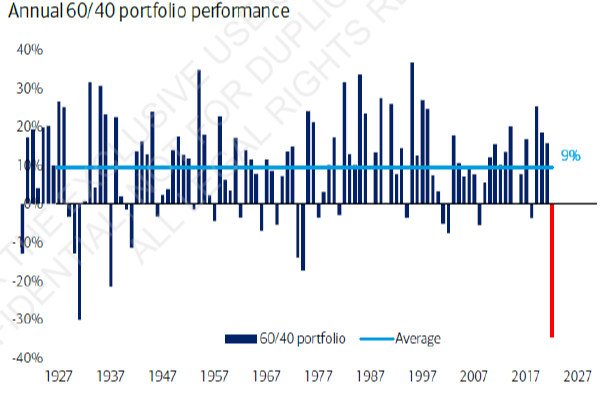 In Powell's comments last week, the markets were calmed by his comments that the markets seemed to be reflecting the intended effect of rising interest rates and this caused longer-term interest rates to drop off from their highs and begin to reflect an expected slowing of the economy. This was until Friday's labor numbers and this Monday's ISM numbers and Durable Goods numbers. All of these seemed to negate the Powell commentaries and threw more fuel on the fire of interest rate hikes and lack of hoped-for declines in inflation measures.

In reading Ari Wald's comments in his weekend Technical Strategy piece, Ari went into detail about how the actions of the markets tend to lead the actions of earnings and the economy. Ari stated specifically that there is an average 6–7-month lag between the lows of the market and the lows in earnings reports. Better stated, if an investor were to wait for earnings to bottom and recover, this tends to be a time that lags a turn in the markets by 6-7 months. This is similar to the fact that the Fed did not begin raising rates until the first quarter of this year, yet the markets hit their high points back in November and many leading stocks actually began their digestion as far back as July of last year. 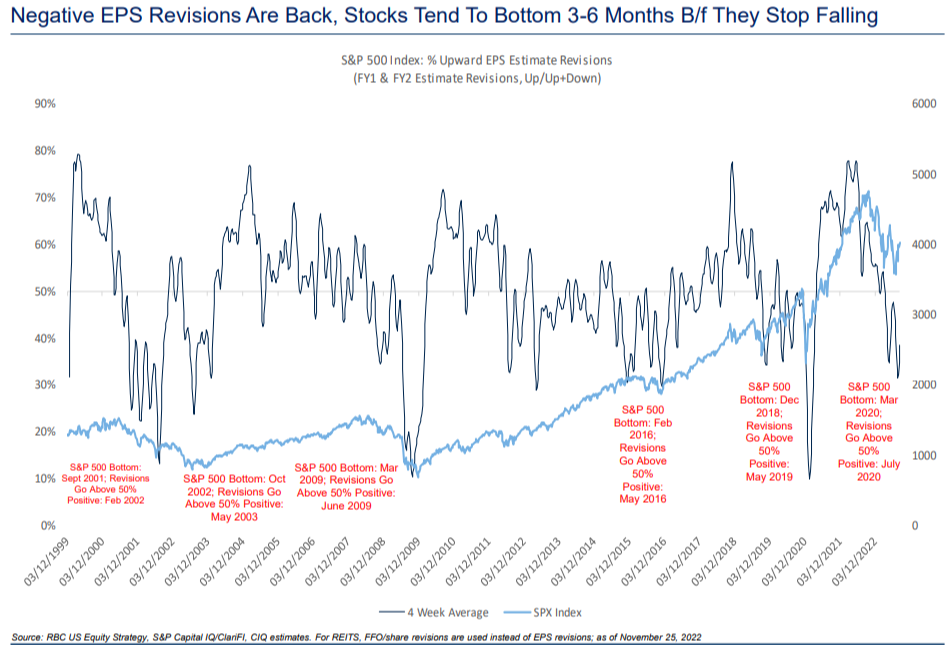 So, the questions that we are dealing with now are in regard to the timeline of market recovery in the face of more rate hikes, rate halts, and rate reductions. We have already witnessed recessionary reports out of the largest economy in Europe, Germany, so it is expected that we could follow suit. While it is not profitable to try to guess the timing of events, it is profitable to see the signs unfold in real time which enables one to increase or reduce market exposure. According to Tom Lee of FundStrat, "In our view, the equity market has changed character. Stocks are proving to be far more resilient. And we believe the Fed has shifted to become far more predictable, away from the 'higher in a hurry' stance." A tweet by @sentimenttrader caught my eye:

If someone were to simply follow consensus on the other hand, consensus views differ most sharply as follows:

Based on Ari's work this last weekend, we could already be turning even though the Fed isn't done and even though the economy could be slowing more. I believe that based on the resiliency of the US economy and the amount of purchasing power still present, the US economy could be slowing, but there are pockets (as evidenced by the economic numbers this week) that are still healthy and should be able to weather the effects of higher interest rates. According to Brian Wesbury, Chief Economist of First Trust, "Look for a recession to start in the second half of 2023, with some possibility of it starting earlier in 2023 and some possibility of a delay until early 2024." Well, that's pretty succinct, NOT! Put it all together and we have a weak economy that's still growing but showing some signs of wear and tear. Wesbury calls it a "Plow Horse, with shin splints."

In past reports, I have given statistical data that supports a market recovery. I believe the consistency of these statistics, but still question this happening again because of our markets coming off of a bull market in bonds going back to 1981 and a degree of liquidity to the tune of $5 Trillion trying to be burned off. This doesn't mean that I don't think markets will recover, but rather it is looking more and more like a market that is recovering on a sector-by-sector basis- not the broad market all at once. We will be diligent to focus on quality sectors and quality companies as the global markets continue through the turmoil they are experiencing. The US economy has historically been very resilient and figured out a way to recover. I don't expect this one to be any different. The difference "this time" is the way the markets deal with inflation and spiking interest rates, and how our policymakers deal with these issues and stand prepared to do what is necessary to assure our eventual economic recovery.