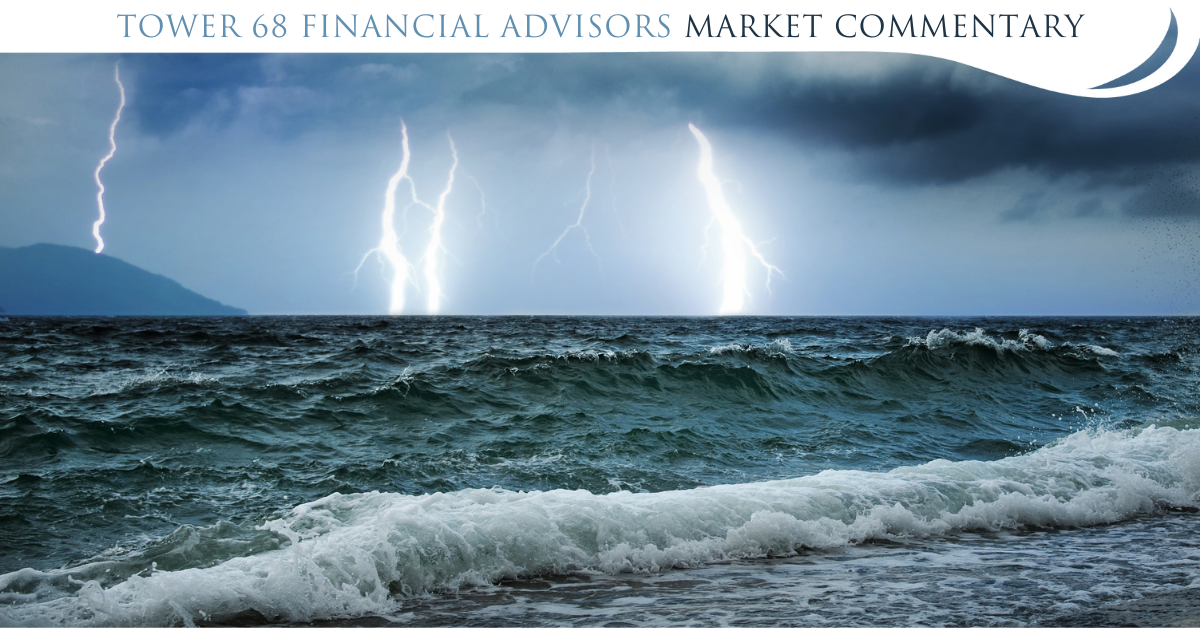 Does an 8 Year Low in Retail Sentiment Lead to Violent Upside?

If I’m being honest – last week was brutal. I know I wasn’t the only one who was looking for a bag of frozen peas to help numb the pain of losing the octagon match against the Market. But hopefully, no one’s eyes were too swollen shut that they missed the Dow Jones Industrial Average deliver a small but mighty gain for the week. I’ll take a win where I can!

This was shocking considering that this bone-crushing decline left many once loved and revered winning companies completely decimated. Some with declines of 50-80%. This was not to be the case though as virtually all major indexes from Small-Cap to Large-Cap, Value and Growth rallied hard into the close on Friday and continued their ascent on Monday.

The major question is: will this comeback story hold? Although this seems like a major shot in the dark considering the amount of damage that has been done, it definitely could happen. As I brought to everyone's attention on Friday morning, with my Special Report, Is it Hot in Here, or Is It Just Me? we had reached such an extreme that we were almost certainly due for some kind of a bounce. While we wait to see what happens, we need to acknowledge two important points:

Shifting focus, I want to emphasize points that are clear: we have definitely hit some extremes. For one, the broad commodities group (not just oil) continues to push higher to a point where (as a group) it has actually surpassed equities on a relative strength basis. It is rare to see commodities show a higher group score than the core equity space, which has not happened since September 2011. These two groups have rarely scored highly together, with commodities spending the majority of the last decade in low field position. Crude oil has clearly led the charge, but also one has to wonder if it can continue given that oil has already run from $30 to almost $90. Sure, we have inflation, but do we have consumption to match a tripling of the price? This placed the price of oil as being up 16.4% as of Friday year-to-date. Clearly not a normal situation.

So, let's dive into the recent action of the markets a little more. Monday of last week, the Markets took a massive plunge in the morning followed by an aggressive reversal in the afternoon. But the week was spent trying to repair extreme damage and it wasn't until late Friday that the market was able to get its groove on. Many have said that without the Fed saying that it will continue to buy bonds and keep interest rates low that the market was on its own and was too extended to hold itself up. This may be true, but as I said Friday, the broad indexes actually reached the same oversold level that they had during the first COVID Crash in early 2020. This is where I begin to have a problem with the decline. OK, I get that the market had gone basically straight up for a couple of years and was due for a digestion/pullback, but a full-on bear market? I really don't think so. This brings me to the "emotional" level of the market currently.

The current level of the market, as measured by the AAII (American Association of Individual Investors) consumer sentiment survey is showing the lowest and most negative readings in over 8 years. Actually, the percentage of Bulls less Bears is the worst that’s been seen since the start of the pandemic. This survey is released every Thursday and last week's reading is a new low in retail sentiment. According to FundStrat's Tommy Lee, they actually view the AAII retail sentiment indicator as among the most reliable of sentiment indicators and their team has been using this series for the past 12 years. The survey itself has been in place since 1987. 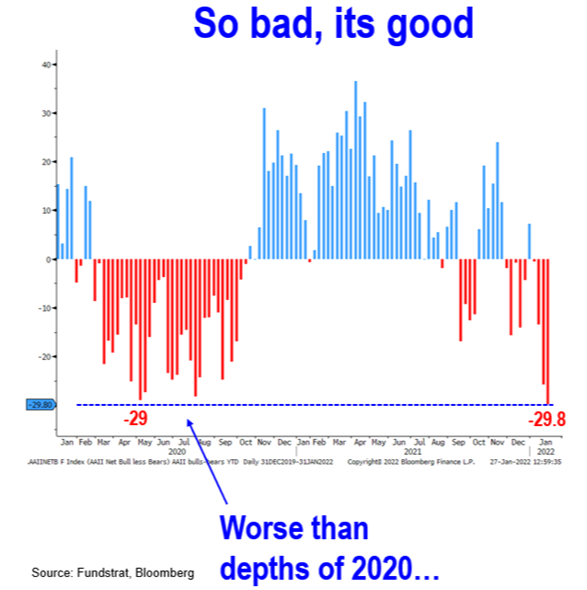 In fact, if one were to zoom out a little further (back to 2009), the current reading ranks among the top 5 worst sentiment readings. There are actually 6 precedent instances where sentiment is this bad. 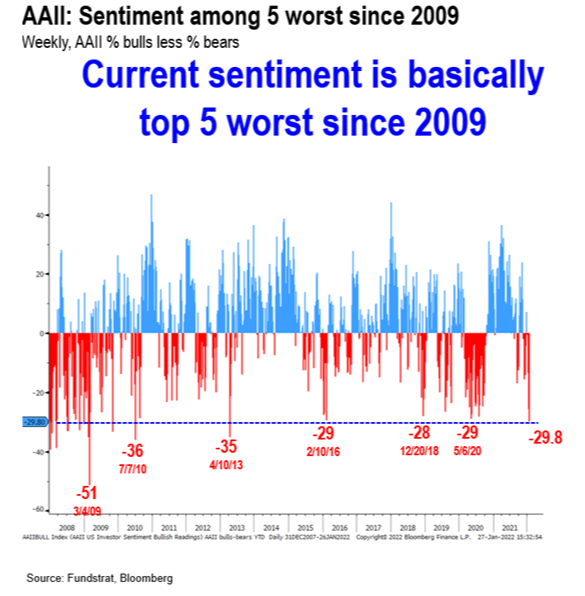 OK, now that we have the facts as to where we are currently in perspective, what did the markets do after these lows?

Does this mean that the markets have to bounce? Of course not, but I like the statistics. All of which call for a violent recovery when it should occur. The point that I find the most strange is that good earnings are not offsetting the selling. Even though we are still early in the Q4 2021 earnings season (only about 25% of the companies have reported), 83% have beaten estimates and are guiding higher yet the markets continued their weakness. It makes me wonder what happens to inflation and prices should labor rates normalize and the supply chain issues begin to be resolved.

The big issue that I am concerned about NOW, is the Presidential Election Cycle.  In the last few letters, and this beginning of this one, I have addressed the extremes that the emotional side of the markets have been at. NOW, due to its consistency, the presidential election cycle is an issue that should be remembered. The last election was in 2000, and we are now at the beginning of the Midterm election period. 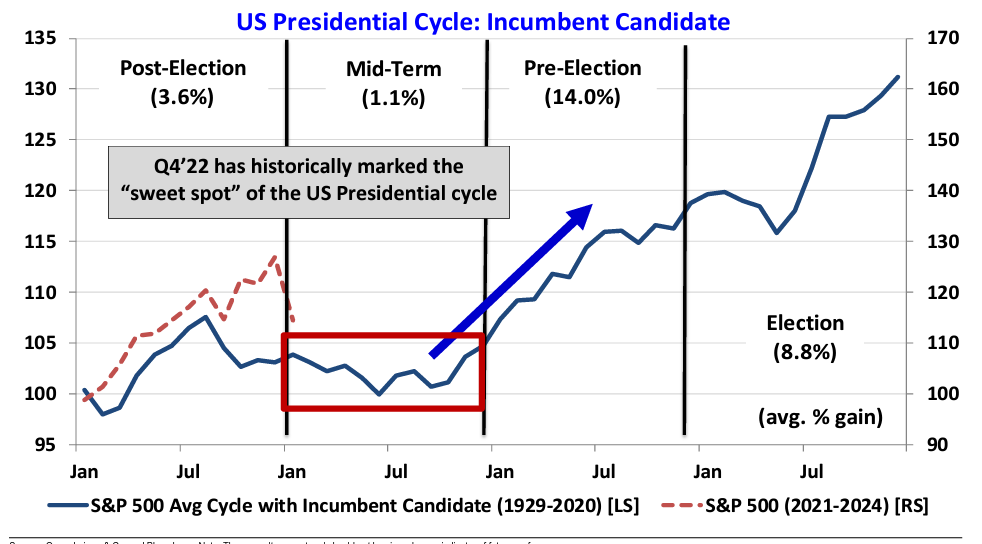 We came into 2022 anticipating the S&P 500 was possibly going to have a more challenging time rising than it did in 2020-2021, and still, we are expecting a positive outcome for the year. What we have been expecting that we had not seen was a correction of somewhere in the area of 10-15%. Well, be careful what you wish for! As evidenced by the chart above, the pullback that is often seen at the beginning of the (Mid-Term) year tends to set the stage for a meaningful opportunity into the end of the year. It increasingly seems like the October low in the S&P 500 around 4,275 might be a pretty good mattress area for a pullback, even though a retest and a lower low could always be in the cards. I say “mattress” as it is never a distinct price line but rather a range that is a little squishy, much like a mattress.

If the problems that the Market is dealing with persist — Omicron shutdowns, supply chain disruptions, and the Fed interest rate hikes — the market may continue to have a rough sled of it for the next few months. Again, this would follow the expectation of the chart above. The Fed is sure to raise rates, the question becomes how much and how quickly. Earnings continue to impress, and the market decline that has been experienced this year has brought on a new spate of share buybacks and possibly a rash of take-overs. All of this could put a higher-level cushion under the markets.

In closing, the markets and the media still seem to be holding investor attention captive. The earnings reports have been good and yet the markets haven't given them credit for possibly being able to continue their progression. Is this due to the market not knowing what to do with dreaded interest rate hikes or continued inflation? We will know and will adapt as we progress. At present, holding great companies in leading industries and taking advantage of over-aggressive sell-offs still seems the right choice. As we consider the various opportunities for the investment of one's dear capital, it remains clear that US Equities and Commodities still hold the lead in comparison to low-yielding bonds and International Markets. It must be remembered that the developed and emerging markets still seem to be US Economy dependent.

So as is the norm, be patient, prudent, and thoughtful. Rome wasn't built in a day; a great portfolio shouldn't be either.